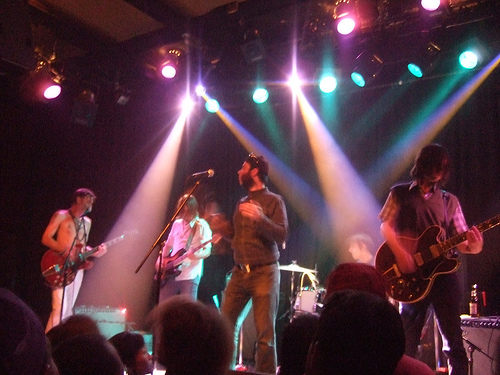 Honestly, I don’t know where to begin.

How about here- I’d heard of BJM but had never much listened until I saw DiG!. I’ve been listening to Tepid Peppermint Wonderland: A Retrospective

So I knew Anton Newcombe was a brilliant, crazy man. I’m pretty forgiving- I’m there for the music, I can deal with some stage issues/antics/whatever, but last night pushed me almost to my limit. I won’t seal the deal and say I’d never go see them again- I think I’ll give them another chance, it just sure as hell will not be on a Tuesday night.

I caught most of Dimmer’s set, from New Zealand. Nice sound, but they need a new aesthetic. The lead singer is too much older and dressed a mismatch to the rest.

Dimmer’s set ended at 10ish, and BJM did not walk on stage until 11:15ish. The music that was played by the DJ was wacko- it went from The Streets to motown, house, skipping songs halfway through, and not in an artful fade in and out kind of way. The cigarette smoke from the guys setting up the multitude of instruments started to form a haze cloud over the overly patient crowd. The bassist- I think- lackadaisically ate a sandwich as he set up his equipment. Candles were lit and repositioned. Strings were tuned and retuned. More cigarettes were lit. Joints, pipes, one hitters, and bullets-yes bullets- were tapped by the audience during the wait. Only at the very end did a few squaks of WTF echo across the room, and by then, the side of the stage began to populate.

When the sextet took their places, I continued to look for Anton. I guess I hadn’t seen a photo of him in years, or the lighting was bad, or my contacts were maladjusted from the smoke- but he looked a pity. Not dope sick, but in the wallows of middle age mental mayhem that’s being treated with alcohol and pills. Shirtless, in white jeans and beads, the only thing left unspoiled were his talents- his “perfect pitch”, his voice, his guitar. “Wasted” said someone in the crowd as Anton slurred to thank the crowd and describe how he is giving us this and has worked so hard, and that we should/do not understand the difference between “rights” and “privileges”, main themes for the evening. From here on, the night is a blur of audience members being told to fuck off, band members being told that they should be fired, and speeches on various muddled topics that were passionate, informed, and unintelligible at the same time. At one point, Anton asked the front row if they were thirsty, and gave someone a bottle of water. He doesn’t “drink the shit”, and do “we know what’s in there”, it’s “calcium and magnesium”, which is the “same shit as in Prozac”, and that it takes more water to “make the bottle than the stuff that goes inside”. Informative, current, yet paranoid and shit, it took him 3 minutes to say it.

The body language of the band- except for Joel– reminded me of myself at the end of my 7 year mentally abusive relationship: broken, apathetic, and numb. All are great instrumentalists- they have to be. Anton would fire them on the first night if they weren’t. There was just a lot of time between songs- I think they made it through 4 or 5 in the first hour, and some songs seemed as though every member was looking for cues from someone else as to where to end the song. Around midnight, the Black Rebel Motorcycle Club guys showed up to see the set. The guitarist, Peter Hayes, used to be in BJM. The songs started flowing much better at this point. However, as we approached 1am, I had to call it quits. I hate leaving a show early…but beyond having an early morning, I was a little perturbed about the whole thing. I expected some fireworks, but when it overshadowed the music so much, I just felt awful. Perhaps I have seen too many rehabilitated rockers in my days.

My ‘videographer’ was very irritated by the whole thing- to the point that he filmed pure rants and no music. Sorry.