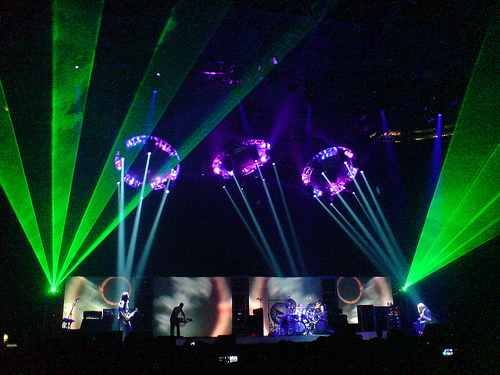 Tool has been on my list of bands to see for 15 years. The timing was just never right. Finally, the stars had alligned- making Tool my last official how of 2007, letting me go out with a dark and dangerous bang.

Bill Graham Civic may be my least favorite venue of all time anywhere. It has no personality, and succeeds in hiding the performance from multiple positions on the GA floor. There are just certain performers that I will make the exception for: Audioslave, Bob Dylan, Snoop Dogg, and now Tool.

Trans Am is a fantastic choice of opener for Tool, though their set was entirely too short. All I know is that I can’t wait for them to come back to SF, to a nice small venue that they’ll blow the doors off of. The crowd seemed to appreciate it, hopefully abating any fears that went though their heads before going on stage.

We had secured the somewhat usual position, against the barrier to the left of the stage. The huge barrier was indicative of the fears that this crowd was going to get crazy, and it was populated by an large number of who I have come to know as the meanest NES security guys known to the area, as well as several EMTs from Rock Meds.

I have purposefully not sought out much info on Tool’s live performances as to not spoil my first experience. All that I knew was what had organically come to me: Maynard is the most charismatic vocalist ever. Unfortunately this lack of preparedness nearly ruined my experience, as my exact position prevented me from seeing Keenan almost 90% of the time. Occasionally I’d catch a peek of him bucking like a wild man, cowboy hat in air, or the bristles from his mohawk come into view. There could have just been a recording of vocals back there for all I know. Unfortunately, it was impossible to move at this time.

My best view was of the guitarist, Adam Jones. I had problems realligning my expectations to understand that Tool is not about a showy performance. Basically, watching Jones play the guitar is like watching someone standing in line at the post office, and he just happens to have a guitar in his hands and is playing some of the most amazing sounds you’ve ever heard. My initial thought is that what he is playing is so difficult that he can’t move, but he almost never looked down at it to adjust his positioning. I went back in forth from being in awe to wanting to go shake him to see if he was awake.

The bassist, Justin Chancellor, is in direct contrast. His curly mane is constantly flailing around as he busts out some of the best bass lines in rock music today. I have always loved the spotlight that Tool puts on the bass.

The drummer, Danny Carey, sat behind one of the largest drum sets I have ever seen. He was wearing a Lakers jersey, which somehow seemed appropriate considering the athletic prowess that his Tool drummer must possess. Towards the end of the set, he was joined for a drum menage-a-trois with the drummer from Trans Am and Tim Alexander from Primus, to which Keenan held up score cards for at the end.

To return to the stage setup, there are multiple video screens displaying Tool-like trippy videos, and as the night goes on the light show is amped up to included the three rotating circles of multiple different colored spotlights, and lasers that formed shapes on the walls. This is another point when I have to come to terms with my expectations- this isn’t heavy metal as I normally define it, as the aesthetic touches upon elements that I would expect at an electronica show.

So, after doing some research post show, I discover that it is customary for Keenan to stand at the back of the stage. I’m conflicted- I know that it is a statement of not making the vocalist front and center, but at the same time is definitely took away from the experience. He could have at least made a couple of trips to the front. I’ve seen old videos where he was up there. He has one of the best voices in rock, and I just really wish I could have seen it for myself.

Tool is known for it’s epic songs, with the majority of them being over 7 minutes in length. It’s amazing that they can pull this off live, sometimes tacking on more minutes to them, without going into jam band territory. There’s a complexity there that doesn’t drag, with the only negative elements being that the noise transitions between songs can sometimes get tedious. But that’s because, as fans, we can’t wait to hear what the next song is.

Speaking of songs, I was bummed that we didn’t hear any Undertow. But, there was a special surprise guest. Mr. Jello Biafra of the Dead Kennedy’s himself came up and did a killer performance of Holiday in Cambodia. Keenan introduced him by asking “How many of you are 21? Then you won’t know this guy”. The people coming over the barrier looked less beat up from a pit and more overheated crushed a bit from the push. I think people were getting more injured from when the mean bouncers were pulling them up over the barriers. The security pent more time policing anything that looked like a camera. I once got an elbow in my head from security trying to make a guy admit he had a camera. Come on. The camera is not going to freaking hurt anyone. It was really ridiculous.

Perhaps I suffered from too high of expectations from waiting so long to see Tool. Not to say I thought that it wasn’t good, but I feel like I need another experience to give a proper evaluation. And I really hope it is in another venue.

Some naughty people snuck in cameras!!

Author HardRockChick 0
As I’m walking to the Verizon Wireless Theater from my hotel, where I’ve just left my mom who frets like I’m still 16, I...
Read More
My Musical Adventures