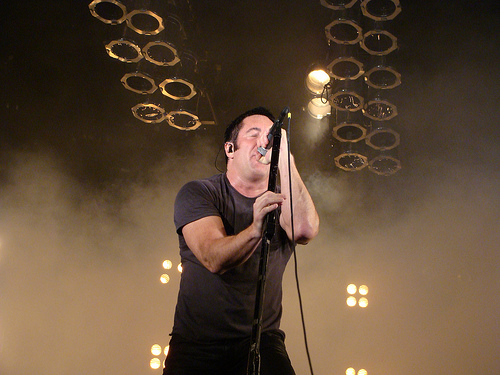 It’s kinda long….but here are some before and afters videos of me talking, with SSSC, NIN, and JA footage in the middle. Photos are below.

And, I got to meet Trent in the strangest way possible- he snuck up behind me waiting to get on the same flight as me to LV using the NIN:Access app! I was posting something, and a message came through from him saying “I’m right behind you”. And I was totally confused, and was trying to figure out, when I turned around and there was Trent Reznor himself standing there with iPhone in hand, accompanied by Mariqueen and Bretty B. I’m sure the look on my face was priceless. I think I said something like “you scared me to death”- and they were laughing. He stuck out his hand, which I gladly shook, and he said, “this thing works pretty good, huh?”. Hell yeah it does! He showed me his phone and said “is that you” or something, and I said yes. Then I told him what an amazing show last night’s set was, thank you, and happy birthday…..which is pretty much everything I would want to say to my biggest idol ever! I did not get a picture as they were boarding the plane and I was in shock, but it was a pretty cool moment for me. I passed up their row on the plane and sat way in the back to respect their privacy. NIN/JA Tour Diary 2- Chula Vista ~ Banged Up and Blown Away from hardrockchick on Vimeo.

The mooning, filmed by ZanMac:

NINJA BUTT from aden_410 on Vimeo. This rabbit ran out in front of us when waiting to be let into the pit- I think it was a sign of good luck! Author HardRockChick 3
Last week, it was announced that Trent Reznor would become the 4th subject in a Digg Dialogg. TR got more questions submitted- 3964- than...
Read More
My Musical Adventures

Author HardRockChick 5
I’ve always been fascinated with the concept of time. Not in a mathematical, scientific sense. Oh no, that would be far too cerebral for...
Read More
HRC loves NIN My Musical Adventures

Author HardRockChick 8
It’s been 2 days of extreme highs and extreme lows. I am fully convinced that the Oakland show was just a warm up for...
Read More