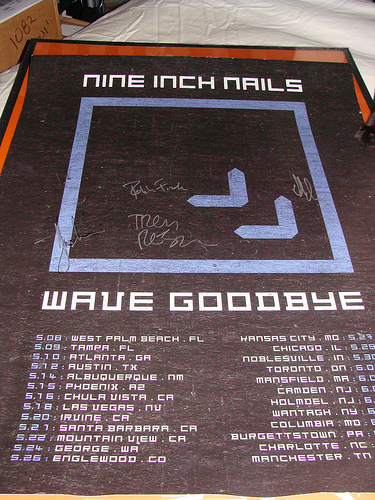 There had to be nine of these.

Never in my wildest dreams could I have imagined everything that would happen to me over the course of six NIN/JA shows. They were highly anticipated, with expectations through the roof, and I was still blown away. I made new friends, crossed about five things off my bucket list, saw some of the best sets of my life, and, ultimately, found myself again. What does that mean? I started a new chapter in my life- one that won’t be easy, but is necessary. Before the tour started, I chatted with several NIN fans separately about their hopes for this final tour. Almost all of them had never met the man. Despite years of following, many of us had never been lucky enough to say thank you in person. I think all of us were able to fulfill this wish, and help save a life along the way.

Over the course of my six shows, I think I met everyone in all three bands, plus a lot of the crew. Every single person was as nice as can be. I can’t imagine what it would be like to meet your idols and have them turn out to be assholes. Well, I met all of mine, and they only made me love them more.

This tour also made me realize how much technology is a part of my social life and aspiring career as a rock journalist. NIN : Access, Twitter, SMS, WordPress, YouTube, Flickr, NIN.com forums…..they all propped up my experience with the tour and allowed many of my experiences wouldn’t have happened without their existence. There was only one thing that I expected that went unfulfilled- NIN + JA collaborations. I’m not sure why, but there is probably a good reason.

I also realized that vlogs aren’t for me. I’m cool to record bits and pieces of the shows, but I just can’t talk on camera very well…especially right after a set.

With that, I would like to go through the highlights that occurred over the course of my own little NIN/JA tour.

Chula Vista
– Arriving at 7am in to be the sixth person in line. I fully expected lots more people.
– The mooning from a crew guy as a bus drove by
– The line cutters, and using NIN:Access to rat them out to the NIN camp, where JT came out and immediately booted them.
– The rabbit that ran across the amphitheater when we were about to be let in to the pit
– Getting near center rail for the first time ever
– Street Sweeper Social Club coming out to ‘California Love’
– The epic Trent guest appearance doing ‘Kick Out the Jams’ with SSSC
– Getting the SSSC setlist
– Terrible Lie had to be stopped and restarted with Trent saying, “It wouldn’t be a nine inch nail’s show without something fucking up!”
– Hearing ‘Metal’ for the first time with some interesting dance moves from Trent
– I’m Afraid of Americans
– Seeing Jane’s for the first time
– Being completely smashed in the pit up against the rail, and I’m pretty sure the guy behind me had an erection, and put his hand around my waist, but I was so packed in and tired I couldn’t do anything about it.
– The TR airport incident

Las Vegas
– Meeting up with my friends Araby and trzdnsmommie after doing the first show alone
– Making friends with Capital_M and KiMMY_L, who I had seen in Chula Vista, to unite in line strategry at The Pearl
– Starting the controversial list at 9pm the night before the Vegas show
– The feeling of being the first ones on that list
– Breaking the news of the list to people who started showing up later, and having to deal with a lot of bitching
– Playing penny slots until 4 in the morning, then again from 8-10a
– Getting that #2 wristband and getting to sleep
– Being led through the cavernous Pearl, and walking in and taking absolute center rail for the first time ever
– The smoke alarms going off before the NIN set
– Being amazed at how close we were to TR during that set
– Opening with Somewhat Damaged
– The Day the World Went Away
– Physical
– I Do Not Want This
– My favorite Jane’s set of the tour: song dedications, Perry’s anti-blog speeches, Perry’s speaker intimacy moment
– Backstage Pass #1

Santa Barbara
– Learning about the Eric donation, and deciding to split the $1K one with trzdnsmommie
– Driving to the Santa Barbara Bowl, and trying to find where to park and driving straight up into the venue by the buses
– Drinking vodka in line- pretty much the only show I drank at
– Doing second row center in heeled boots and getting massacred during the pit
– The brutal tambourine fight that caused JT to pull a guy out by his ear
– Trent laying on top of some friends in the crowd during Piggy
– “Brunch with NIN”
– A crowd surfer fell on my head during Jane’s- was bound to happen someday!
– Driving home 5 hours and starting to hallucinate

Mountain View
– VIP in Mountain View: Backstage Pass #2, rounding the corner for soundcheck, jamming out to four NIN songs and three SSSC songs during soundcheck
– Meeting TR for the second time and having him remember the airport incident, finally getting my PHM cover signed, meeting the rest of the band, and finally getting a picture
– Seeing SSSC on their way onto the stage and having Tom tell me that he saw me rocking out at their soundcheck
– Watching NIN take the stage from backstage
– Epic performance of Piggy
– Watching Jane’s from backstage

Camden
– Lost in NJ w/ bluelily425– from Philly to Camden, Camden to Philly, Philly to Brooklyn, Brooklyn to Holmdel, and Holmdel to Brooklyn. All GPS failure, and full HRC meltdowns.
– Backstage pass #3- thanks to Lynn and her donation for Eric
– Watching Bill get his haircut in the production office
– Meeting TR for the third time
– Hugs from the band
– The TR short and tall pictures
– Eating cheesesteak with NIN fans listening to Closer
– Watching NIN from backstage
– Breaking Christine’s NIN cherry
– Catfight in the lobby

Holmdel
– Crazy traffic getting into the venue + the parking lots full of nailgaters that looked like they were following The Dead
– Backstage Pass #4
– Making someone’s day with extra tickets
– Running into Amanda Palmer backstage
– Epic final NIN set for me- Last, Reptile, tears over Hurt
– The moment the usually still Christine threw a fist in the air during MotP…I knew she was hooked
– Fighting with various security guards trying to tell them I’m supposed to get on the stage during Jane’s
– My second favorite Jane’s set
– Pulling an all nighter afterwards to catch my flight home

Were you there? Please leave comments and let me know about your highlights from the shows- I’d love to read them!

Author HardRockChick 0
It’s good to step out of my musical comfort zone every once and a while to see what else is out there. Oftentimes, it...
Read More
My Musical Adventures

Author HardRockChick 4
This particular Friday evening was one of those SF nights that occurs every few months, where there are 10 different great things going on...
Read More
My Musical Adventures