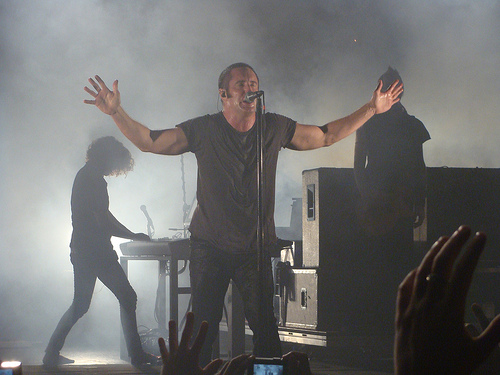 Let’s just say that Nine Inch Nails has been like my lover…perhaps my best friend….for a long time. NIN has been there with me through a lot. It has comforted me when I was sad; it has turned me on; it has introduced me to new people; it has given me inspiration.

The break up began in December in Las Vegas. But then we got back together for a brief fling earlier this summer. I thought it was over in Holmdel. And then, we went on a couple dates in New York. But NIN made it official on September 10th, 2009. That was the day the movers came, and the keys were left on the counter.

My final pilgrimage to LA started like this: I was hardcore frisked by security because my bondage pants (hey- I was dressed for the show!) set off the alarms, then my flight was delayed and I was freaking out amidst all of these suits who were staring at me in my outfit. It was only delayed 20 minutes, but that was enough time to know that I wouldn’t make it for wristbanding. The Wiltern has a bunch of tiers, and the pit is limited to a couple hundred people. Luckily my friend and +1 who had been waiting all day was able to find another person to use their +1, so she could get in the pit (scalper rules say both people have to be present to fetch the tickets). But I was very sad knowing that I wouldn’t be close for this show.

A stiff drink and the now familiar 55 minute plane ride later, I was in a cab and off to the venue. Then I walked down the ticketing line to see if anyone waiting needed a ticket, and I found one! So I was able to skip the line and give this guy my extra ticket. It wouldn’t have been a NIN show if I didn’t stress about tickets or lines somehow.

Everyone was in quite the mood for this last show. You could cut the tension with a knife. The outpouring of emotion by the fanbase was an amazing thing to witness. I’d liken it to attending a wake; everyone was sad, but sharing positive NIN memories while waiting in line. But everyone was stressed about having the perfect spot at their final NIN show.

It was NIN magic- somehow, me, @trzdnsmommie, and @Capital_M were able to score the center of the first tier, which was eye level with the stage- and we all came in at different times. I couldn’t believe it. It was meant to be. After spending most of the last shows standing by myself, I got to stand in between two of my favorite NIN friends.

The roaming cocktail waitresses helped us celebrate- we got three rounds of shots brought right to us! Everything had fallen into place.

Celebrity spotting was fun: Adrienne Curry was in the pit, Ron Jeremy, Penn Jillette, Tony Kanal, and Rick Rubin were in the balcony. Ron Jeremy always gets a lot of attention from the NIN fans (we like to yell at him…in a good way)- he’s at every Vegas or LA show. Tony Hawk was around somewhere.

Io Echo really scored a gig opening for this show. I had seen them before, opening for She Wants Revenge. The NIN connection is that the lead guitarist is Atticus Ross’ little brother. I think they won some new fans with their set. Io is a great performer, running around onstage in her chic hospital gown. ‘I’m On Fire’ is my favorite song of theirs.

In between sets, my girls and I chatted about the meaning of this moment. Pretty much everything that was said started with “I can’t believe…” A brief check in on twitter revealed that all the NIN fans around the world had succeeded in making #NIN the #1 trending topic on twitter….amazing! It felt like all the NIN fans were there with us, sharing in the moment virtually. I never partake in the trending topic thing, but I felt compelled to share my favorite NIN memory as everyone else was:

And then it began.

Robin’s guitar intro to ‘Home’ swam into my ears to kick off the show. We linked arms and breathed in, as Ilan started assaulting the drums. JMJ started plucking away, and Trent Reznor emerged to sing for us. This, ladies and gents, was the true beginning of the end. My heart started beating faster, my eyes welled up, my mind focused to a sharp point at what was onstage. “I return to the only place I’ve ever felt that I belong”.

‘Somewhat Damaged’…we are in the best spot in the entire building. Out of harm’s way, on the same level as the band, able to leverage the barrier to go wild. And this is a song I like to do that to. “Where the fuck were you?!?!?!” ‘The Collector’…hmmmm…sad thing about this show was the fact that there were some casual fans in our vicinity. Songs like this make me aware of their dumb chatter. ‘Discipline’: the girls and I bump hips as we dance. ‘March of the Pigs’….I will SO miss seeing this song live and feeling the energy it brings. This is the ‘brace yourself, we’re at a fucking NIN show’ song….even outside of the pit. ‘Something I Can Never Have’ just had to be in this set. This song puts into words so many of my emotions that I can hardly stand it. “You make this all go away”…..le sigh.

‘The Frail’ into ‘The Wretched’ was perfect. ‘Ruiner’->’Head Down’->’Burn’…..I was grasping at every note. A crowd surfer came over our head around this point- wasn’t expecting that from this spot- but as he fell to the ground I noticed that he was desperately grasping onto the sole tambourine that Reznor threw out at this show. He had probably been attacked and was trying to get the hell out of there.

Mike Garson came onstage for ‘Just Like You Imagined’, ‘La Mer’, ‘The Becoming’, and ‘Down in the Park’. ‘La Mer’ nearly made me crumple where I stood. It’s truly one of Reznor’s best compositions.

Gary Numan came out again for ‘Down in the Park’, ‘Metal’, and ‘I Die: You Die’. This wrapped up the main set. The first encore could be entitled ‘new meets old’. Some of the newer tracks: ‘1,000,000’, ‘Letting You’, ‘Survivalism’, ‘The Hand That Feeds’ were paired with some of the oldest: ‘Suck’, ‘Down In It’, and ‘Head Like A Hole’. It was really eerie that everyone in front of me knew now that Reznor changes the lyrics in ‘Down In It’ to “I looked him right in the eye and waved goodbye”, and everyone did so in unison. ‘HLAH’ always signals the end of a show for me, so having it at this point meant that for the rest of the set, anything goes.

The second encore was my favorite. I could tell something very different was going to happen because the set change took quite a while. And then out walks Reznor and Atticus Ross, and they launch into ‘Me, I’m Not’. YES! I had never heard it live before. I like Atticus’ dance moves. It was like a NIN DJ set.

They launch into ‘The Warning’, and out strolls Dave Navarro. Or, as most of us say, ‘Dave-Fucking-Navarro!’ I had expected this to happen during the NIN/JA tour, and was so sad when it never did. Good things come to those who wait! Atticus left after ‘The Warning’, and Reznor tossed his voice manipulator into the crowd, causing a massive fight. For the third encore, a second drum set appeared. And then everyone from The Dillinger Escape Plan appeared. And they FUCKED SHIT UP! The quote, “If you don’t know, now you know” comes to mind…..afterward the NIN fans were buzzing about these guys…I have a feeling I’ll run into more NIN fans at DEP shows now. ‘Mr. Self Destruct’ and ‘Wish’ were accompanied by equipment being tossed around and mutilated. Puciato dove into the crowd. It was total chaos, and it was lovely to observe. To go from that into ‘Atmosphere’ was jarring…and it was the beginning of the comedown that would be the end of the show. ‘Dead Souls’, ‘The Good Soldier’….and then ‘The Day the World Went Away’….with two false starts. The song was preceded by a thank you speech to the band and crew by Trent. “I just don’t want to be touring..I’m gonna die if I keep it up” He stopped the song twice to add people to the thank you list. It was interesting to hear him say all of their names and realize how many of them I know due to following the band around. The speech and the false starts were humorous and touching all at the same time.

This is the point when my ‘NIN life’ flashed before my eyes. Really, the last year of it….which was the most meaningful. 20 shows in 4 years; 16 of which were in the past 15 months: 5 LITS shows, 6 NIN/JA shows, and 5 Wave Goodbye shows. All of the waiting in line for rail, all of the people I’ve met, all of the travel, the three times I met Trent Reznor, all of the blogs I’ve written, all of the pictures I’ve taken, all of the video I’ve shot, all of the times I stressed about getting tickets. Really overwhelming.

I don’t care if you tell me this isn’t the end. A lot of people kept saying to me, “why are you making such a big deal about this, Jamie; you know this isn’t the end! It’s just a marketing thing”. I don’t really buy that. I think it will be at least five years before we see something. Reznor’s getting married. He’ll probably have kids. He’ll change. I’ll change. I could be dead in five years! I’ll definitely be older….I probably won’t ever be able to hit the road with a band like I have been able to do this past year. It’s fucking heartbreaking, but I feel good about the fact that I took every opportunity I could to do so. Because I’ll never be at this point in my life at this time in society with this band ever again.

‘In This Twilight’ is when the sorrow manifested and the tears started rolling down my cheeks, as they are as I write this. The girls and I held hands and cried and watched the band leave the stage one by one. And we stood there. “I don’t know what to do”. “I don’t want to leave”. “It’s really over”. Now what? After a lot of quiet looks at each other as we made our way out of the venue, the subject was broached…who do we follow now???

I feel lost, but hopeful. I will find this feeling again somewhere along my journey, but it will never be quite the same as with Nine Inch Nails.