What follows will not be my best effort writing about APTBS. For that, try this one.

My mind keeps going “I’m ok I’m ok I’m ok….everything’s going to be ok“. But my body disagrees. I can’t really pinpoint what is wrong because it changes at every moment…..but it is surely from stress.

But there was nothing that would stop me from seeing A Place to Bury Strangers, especially because I would be taking my dear friend Umlaut to see them for the first time before I leave the Bay.

We didn’t leave until after 10, knowing that they wouldn’t be on until midnight. But we were still there in plenty of time for me to have guest list drama and catch an opener I didn’t like. It was my first time at the Blank Club, a smallish room with a stage in the corner and some booths along the side. The stage is adorned with sparkly blue streamers and a formal looking black canopy….kind of an interesting festive formality to APTBS’s aesthetic.

It was too easy to just walk up and stand front and center for the set. The crowd followed our lead and filled in behind us. I hear a girl say in a valley accent, ‘I don’t know much about them, except they have really heavy guitar and it, like, sounds really good.’ Actually, that kind of sums it up. 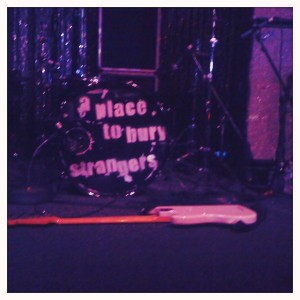 I introduced myself to Oliver as he was setting up, letting him know I was the girl who asked him the weird questions on the phone the day before.

As I was standing there waiting for them to come on, I felt excitement take over my general lack of feeling normal. And as soon as the set started and I was brought into the zone, all felt right with the world. Early on in the set there were two songs that fit so perfectly into the rest that I thought maybe I had suffered brain damage and couldn’t remember the names of the songs…..but the setlist would later reveal that they must be new songs. 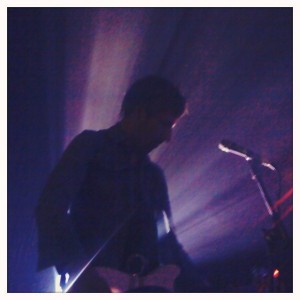 I’m watching how close Oliver’s guitar comes to our heads as I groove into ‘Missing You’….’Deadbeat’…’To Fix the Gash’. The fog keeps coming at me and I notice the chalky aftertaste. Then during ‘Ego Death’, I started to notice I was getting a bit of tunnel vision. I knew the strobes were about to be turned on, and to avoid a dramatic faint in front of everyone, I went to the back of the room. However, as soon as I turned around I knew that faint was coming whether I liked it or not. As soon as I opened the door to the bathroom and the light hit me…..I don’t know, but I woke up on the floor 10 seconds or so later.

Occasionally I have fainting spells; it doesn’t even freak me out that much anymore. In fact, as I opened my eyes and saw the ceiling, Oliver’s word’s from our phone interview floated into my head…..’out of body experience‘. Indeed. As I washed my face and waited for the color to return, I found it ironic that I could hear the vocals to ‘Ocean’ perfectly.

“Walked four miles on your heart,
I don’t like
I don’t love
Fall down and fall apart, I could scream and you won’t hear
Touching skin, ruby lips
In a dream, in a kiss
Can’t see the night, and not your eyes, and you don’t notice
That it’s love that holds you, you can never let it go
That it’s love that controls you, you can never let it go
Let it go…”

Even though I was missing my favorite part of the show- the destruction- I could see it in my mind’s eye, and there’s something about knowing a band’s set that well that’s pretty cool.

I walked back into the room to see the climax of ‘Ocean’, which featured some great in air axe collisions between Oliver and the new bassist, Dion. It was better than dueling banjos. 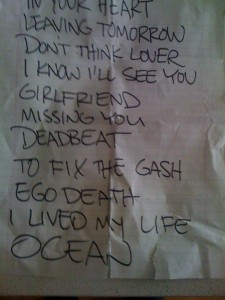 Author HardRockChick 0
The Rickshaw is an out of sight, out of mind venue for me. I’ve seen some phenomenal shows here: M.I.A., Goblin Cock….but it’s generally...
Read More