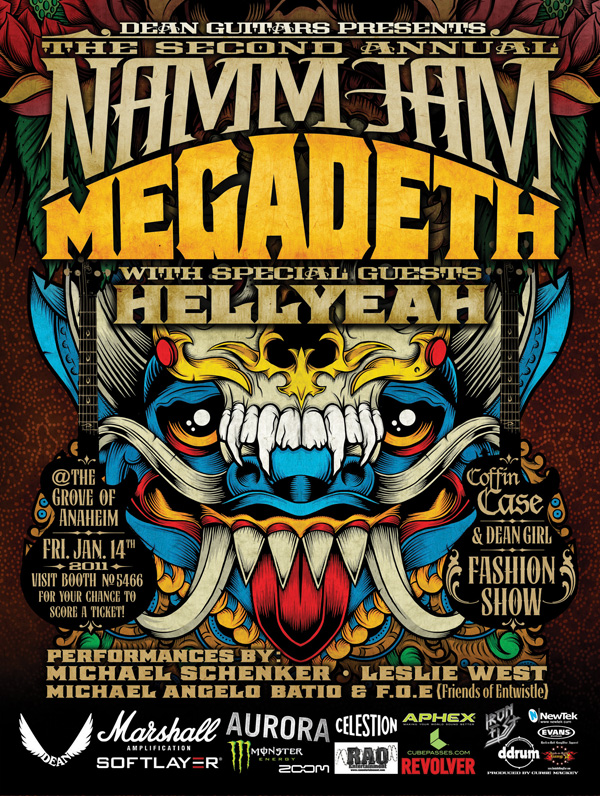 After the excitement of being at NAMM all day, and finally hunting down passes to the afterparty for the evening, my energy meter fell to zero by the time I got back to The Challenger. I soon found myself sipping on some coffee and eating a protein bar in a parking lot near the venue listening to Led Zeppelin. Before I knew it, my eyelids were getting heavy and since I had some time to waste I leaned the seat back and took a little nap. METAL! What was extra funny about this was that someone in the car next to me appeared to be doing the exact same thing.

Over at the venue, I joined the line of black clad, somewhat familiar looking males for the most part, all with passes at their side where usually their tour laminates would be. Once inside and through the crowded smoking area, I caught up with my friend again to watch the Michael Schenker Group. Through their short 4 or 5 song set, I realized that the sound in this place was terrible…and I’m generally not picky about sound. It was too loud to go without earplugs, but with earplugs the sound just seemed so muddled. Plus, it was a tad odd to watch a band while standing behind a tier of people eating steak dinners…

After the set, my friend who knows EVERYONE got us into a table of quickly disappearing VIPs. It was nice to sit down but was odd to continue to do so through the Hellyeah and Megadeth sets….I know, I know, NOT METAL but a) my feet hurt and b) it was the kind of sitch where if you stood up you would block some other VIPs view and, well, you don’t want to do that.

First we were treated to a Coffin Case fashion show, kicked off by emcees for the evening Metal Sanaz and Jose Mangin. There were a lot of leather and spikes and feathers and such….it was fun, and I appreciated that the models weren’t all skinny. It did get a little raunchy at times, though….I dunno, I could go into a feminist rant here but I shall refrain.

When Hellyeah hit the stage, I thought it was cool to see Vinnie Paul play after many many years…but I didn’t really dig the music. There is a song called ‘Alcohaulin’ Ass’. Wow.

By the time Megadeth came on, you could look around the crowd and tell that everyone was in a state of tired/drunkeness. After seeing Megadeth with Slayer towards the end of last year, this was a much more stripped down version of the band. I would think it would be somewhat intimidating to play for a room full of peers rather than normal fans. All this said, it was still fun and I’m glad that I went…it was just a mellow show as far as metal goes. Once ‘Symphony of Destruction’ played, I ducked out early….passing MastoTroy on the way back to The Challenger.

Then I drove all the way back up to Hollywood, grabbed a late night drink with some friends, and then retired to my suite…which made me feel really, really lonely after a day surrounded by so many great people.

Author HardRockChick 0
I’ve always been a little obsessed with death. Be it horror films, serial killers, metal, or reality; the subject has always been a part...
Read More