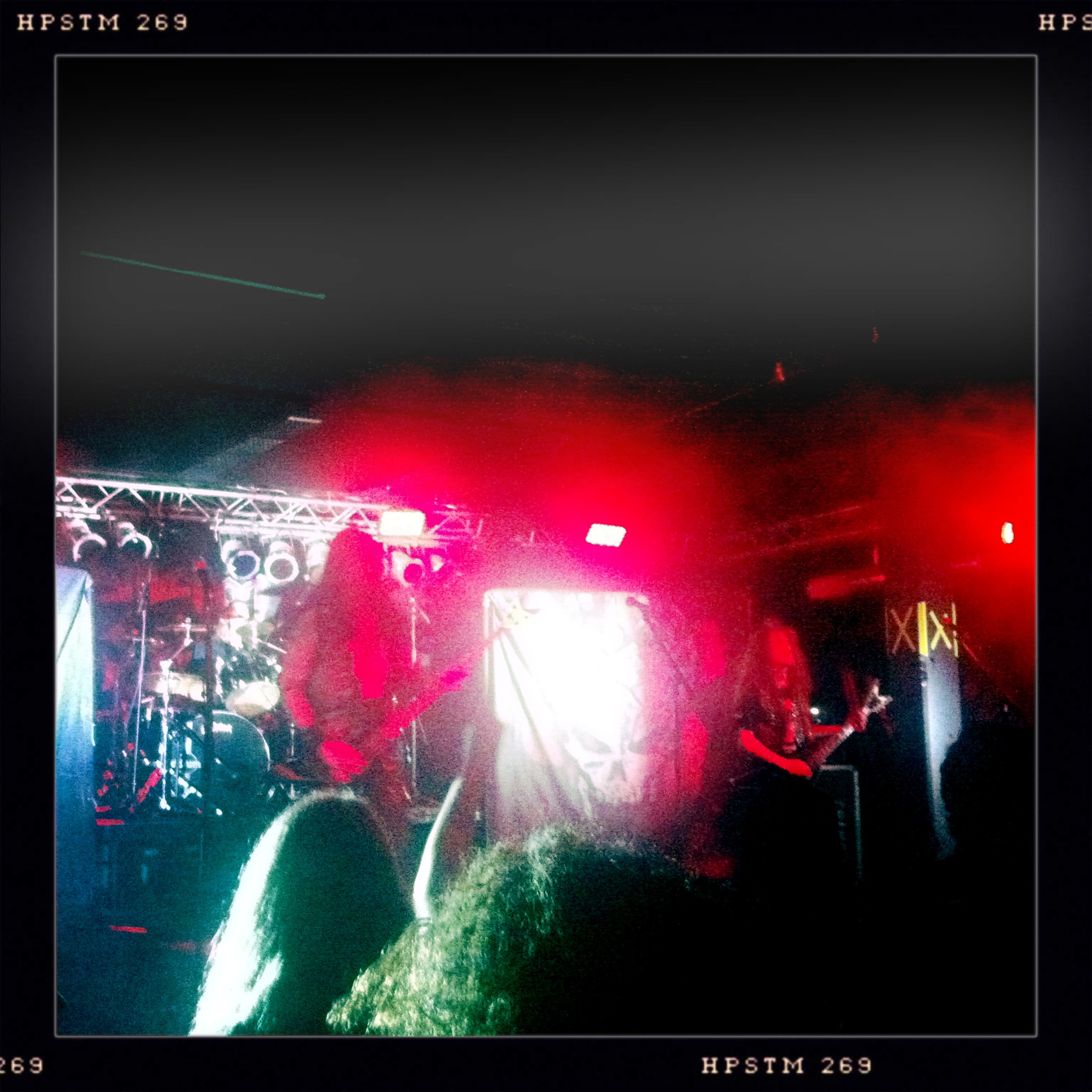 I hate the feeling of sickness creeping in. And since I always have a million things to do, I always choose to ignore it.

I pulled into the neighborhood of Backstage Live and decided to skip some of the openers in lieu of resting in the car. Two hours later I peeled myself out of it and walked to the venue. When my name wasn’t on the guestlist, my patience wore thin as the promoter tried to get me to pay a discount instead of contacting the tour manager number I was given. I don’t understand why some of these people seemed so annoyed with bloggers….we’re only trying to help.

The crowd was sparse as I walked towards the stage and discovered I had forgotten to bring my earplugs. This was not the show to make such a mistake at….despite the number of shows I go to my ears are very sensitive. And the metal for the evening was about to destroy them for days.

Heathen is from San Francisco, a peripheral part of the old Bay Area thrash scene. To me, much of Heathen’s work didn’t age well. It took me a second to place the guitarist as also being a member of Exodus. They played a lengthy set that I spent mostly laughing at a guy in front of me on the rail. He was supremely drunk, and in between normal headbanging maneuvers he had these stripper-y moves, which included bending over backwards until he was awkwardly face to face with me. He kept doing this and swaying around until finally he fell. Then he got up to leave and accidentally hit me smack in the upper inner thigh. 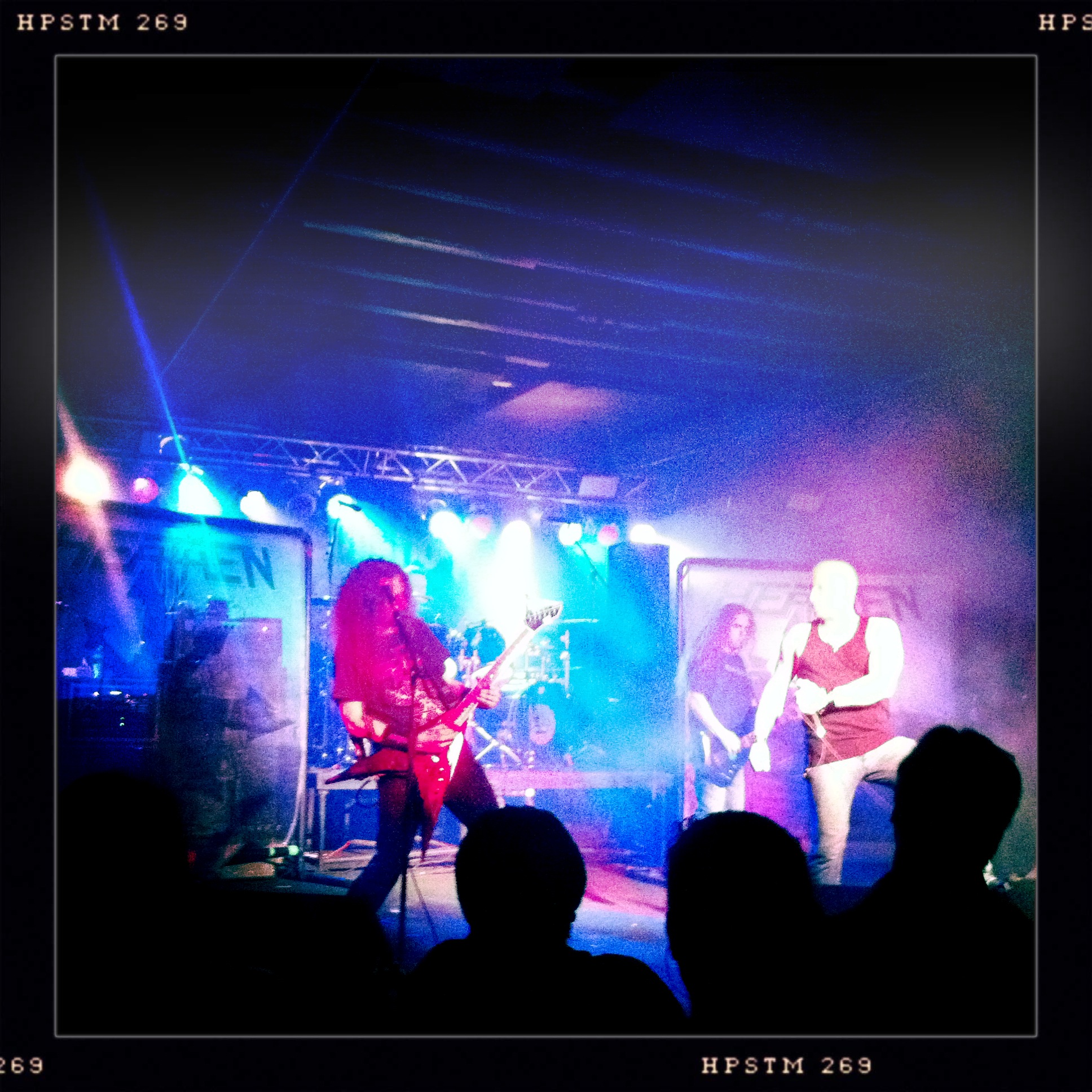 So far I was not having a good night.

By the time Destruction came on stage, I could feel a fever creeping in. But they were so good that I almost made it to the end. After apologizing for taking so long to come on stage- I could tell the drum tech was having difficulty setting up and the band was sure to point out that it was a venue equipment snafu- they proceeded to rattle the crowd. I’ve noticed in my time back that San Antonio metal shows are highly inconsistent; they’re either sold out or grossly under attended. But they often make up for it in enthusiasm…however, this time, keeping in line with the stripper rail guy from earlier, this would be one of the weirdest crowds I’ve maybe ever experienced.

Schmier wanted to amp up the mosh pit, so he instructed the Mexicans to teach the Americans how to mosh. As I looked into the pit to see how this was going to be received, I noticed a guy who I’m pretty sure I’ve been seeing at metal shows since I was 16. We used to call him Butterbean; he’s the shirtless older guy who is just a total monster in there. But he was quickly bamboozled by some couple’s moshing…yes, couple’s moshing….the couple that usually wraps together as one unit at shows only this one was flailing around the pit. The couple’s moshers could sense the power they were wielding and took it one step further; the girl instructed a bystander to photograph and/or video as she was carried Cleopatra style by the guy around the pit. Suddenly hipsters didn’t seem so bad.

I’m not sure why this German thrash band didn’t have more widespread success. With my cursory familiarity of the band, I listened on and focused in on the sound that is said to have laid the foundation for death metal. I really couldn’t get over how a three piece could put such an assault on my ears. What started out sounding great I could tell was about to short circuit my naked ears, so off into the night I went…and my ears rang for three days after, when I went to see that other German metal band.