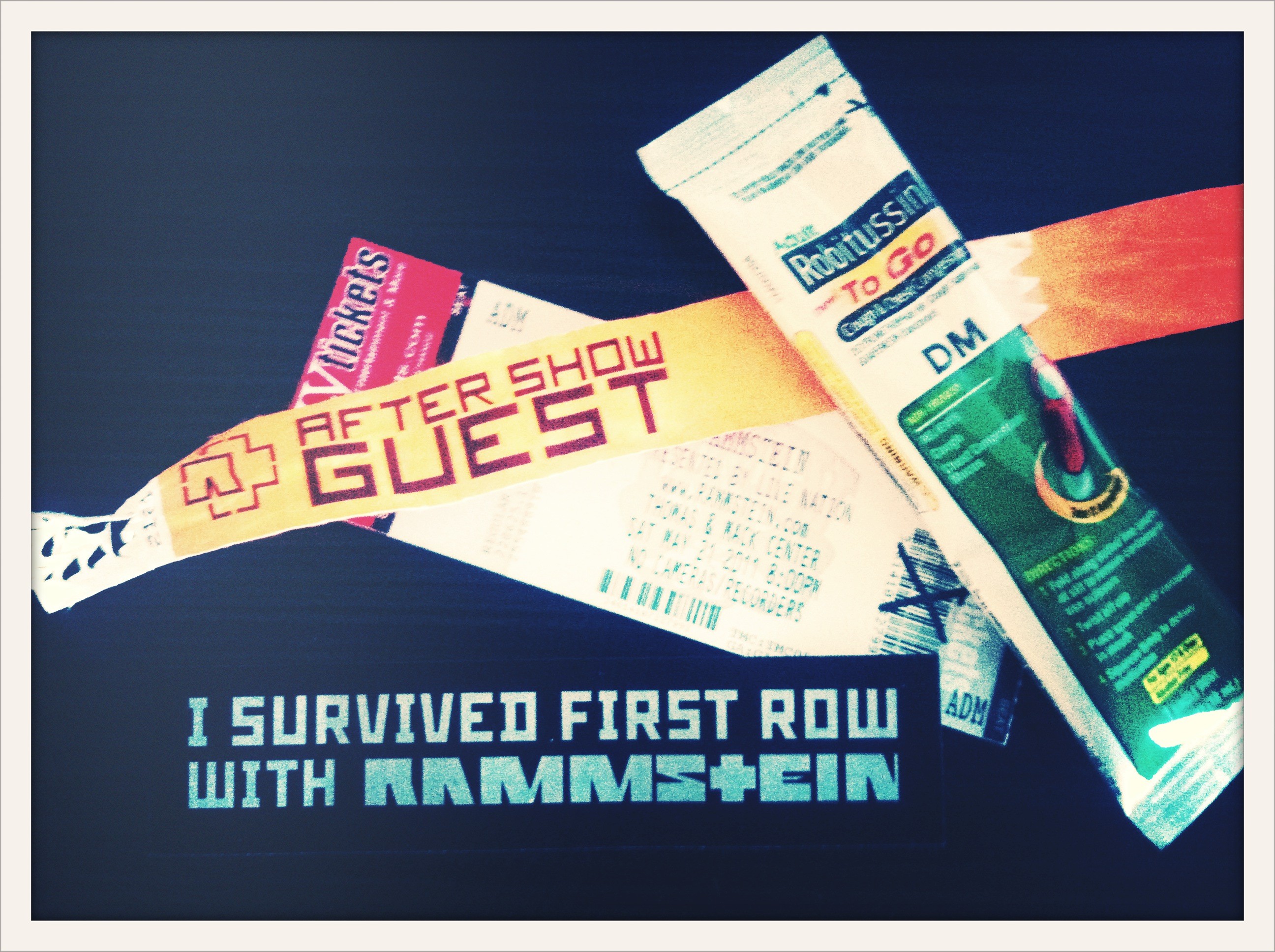 photography and video by capital_m

Five months earlier, I sat down in my seat at Madison Square Garden after seeing Rammstein for the first time, trying to process what I had just witnessed. Now I was standing at the rail with three of my girlfriends holding ‘I Survived First Row With Rammstein’ stickers covered in foam-jizz, thinking in my head ‘I wanna go AGAIN!!’. Rammstein is the ultimate concert experience; and after seeing it from afar, I got to experience it up close….I wanted to feel the burn.

Which is funny, considering that a few hours before the concert was supposed to begin, the Chosen ones were supposed to rise to Heaven, leaving the rest of us, which would definitely include me, to fend for ourselves in some Hell on Earth scenario for some number of months. To me this sounded pretty fun; I was looking forward to Rammstein being the kick off party to this Rapture experience, which would then be followed by a night of Sin City Shenanigans that would be like Sex and the City (the TV show) meets The Hangover meets The Decline of Western Civilization Part II….but I guess that will have to wait for some other time.

The four of us met through following Nine Inch Nails, and are no strangers to waiting 24+ hours to be in front. Intel had us arriving three hours early (snickers) and even though the line was fairly long already we succeeded. We also got to wait inside a gym in a very orderly fashion behind a mix of people who looked exactly like you think Ramm fans look like and some who looked like they had come from the pool. Not sure what was going on there, but it gave us plenty of material to be harmlessly snotty in line, like the good ol’ days when we met in line at NIN shows.

There was another reason besides extreme desire to be on the rail at this show, and that was necessity. I needed something to hold me up. By the time I dragged myself up to the rail, I was on day 5 of an extreme sinus/respiratory infection that had rendered me near deaf and mute…which I attributed to part of this End of Days business. But as long as I could see and feel the music I knew I’d be ok. I was armed with these little travel packets of Robitussin and cough drops and Kleenex and Dayquil, along with my insurance card in case this was the show that had me leaving on a stretcher. NOTHING comes between me and my music; I was not missing this show for anything.

As the show was about to begin, guitarist Paul was spotted at the side of the photo pit and some uberfans had hilarious reactions to him. “OMG he told us to be quiet……I LOVE HIM!!!”

Combichrist came on 15 minutes early. While last time Wes Borland was on guitar, the familiar looking giant that joined them onstage this time is from Psyclon Nine. I was just getting into their set when something happened which caused everything to be put on hold for at least five minutes when they went to begin ‘Throat Full of Glass’. When they got going again they completely skipped it. For the last couple songs of the set, they were joined by Sin from Ministry and Lacey who used to sing for Lords of Acid/be on Rock of Love/dates Sin. I’m not used to so many people being on stage for Combichrist and felt it to to hinder the set instead of help; I’m really glad I’m seeing a club show of theirs next weekend.

As Rammstein was about to come on, the rail was lined with security to a level I have never seen before. It seemed like one guard for every three people. They looked a bit tense; I would have loved to hear what the briefing was like for this show.

The show was almost exactly the same as what I witnessed at MSG, and I have no issue with that. But since I recounted it in such detail here, I will only point out the differences below.

First of all, it is completely different to experience a show up front and from far away. To see the facial expressions and the musicianship makes a huge difference to me; you capture an emotion and personality that you lose when you see the full production from afar. I thought it was crazy how much fire is around them when I was in a seat; I really, really thought it was crazy when I saw it up close, both for them and for me. There’s no secret to the magic act that hides from most of the crowd….there is always that feeling that something could easily go wrong, and that is of course what makes it fun for crazy people like us.

It had seemed that the MSG pit was pretty tame, and that was definitely the case here. No one even bumped into me all night; everyone was so mesmerized by the show. And this was great, considering I was using every last bit of health I had to enjoy this show.

It’s amazing how live music can be medicine, because I don’t care how shitty I felt, I still somehow became maniacal for my favorite song ‘WeiÃŸes Fleisch’, squeaking out the lyrics like it was a compulsion. And even though I knew what to expect, it didn’t make it any less impressive. There really aren’t enough ways to tell you this: if you missed out on one of these Rammstein shows, you fucked up.

We were near the middle of the set when a little German-accented rockabilly fella approached me and asked if I’d like to go to the afterparty to ‘hang out with the band and the crew after the show’. First, I laughed at the inclusion of the words “the crew” (sorry crew guys). Then I laughed because this felt so ’80s Motley CrÃ¼e or something. So I said that I would go if my friends could go with me, and he agreed, so after getting some location instructions and a wristband I focused back on the show.

‘Pussy’ was absolutely hilarious, getting doused in foam by a beefy German on a giant phallic device. Till’s facial expression while doing this is priceless; it’s so interesting to me how this band can go from being so serious and epic to low-brow hilarity without losing some sort of credibility.

Towards the end, for ‘Haifisch’, the band was joined by Letz and Friedrich from Combichrist, making the drums even more incredible during that song. They stayed through ‘Ich Will’. Watching Till emerge with those wings for ‘Engel’ is one of those concert moments that just doesn’t really get topped. Ah, The Rapture with Rammstein…..bless me Angel Till, for I have sinned!!!!!!!!!!

We went to the specified location to meet for the afterparty, where 10’s of other ladies and a few men awaited. We were taken to a small club within the venue called the Red Room or something where an open bar and trays of desserts were awaiting us. I proceeded to drink about 10 bottles of the finest club soda money could buy while my friends took real advantage of the premium vodka. In many ways it was like a high school party; pop and rap music played on some speakers as most members from each band filed in (and the crew!) and everyone awkwardly tried to figure out how to approach each other. Since I had no voice to chat them up (DEVASTATING!!!! 🙁 ), I busted out some dance moves for the amusement of my friends as we laughed at the surrealness of booty dancing to Lil Wayne with members of Rammstein around us in a funky little bar at a stadium in Las Vegas. Like many things I have been to like this, a Rammstein afterparty is not what you would expect it to be….but it was fun and really cool that we got to go.

I survived The Rapture, rail for Rammstein, and the Rapstein afterparty….now if I could only survive this sickness….

And next time I see them, I think I’ll travel to their native land to do so….since I enjoyed it so much last month.

Author HardRockChick 0
It would be the perfect Halloween: a Saturday night, daylight savings time ended and gave us an extra hour, a full moon, and Rob...
Read More
My Musical Adventures