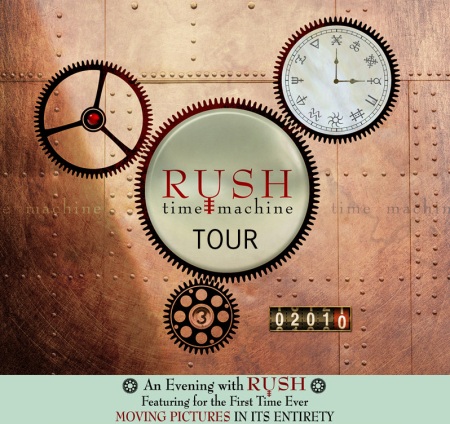 My first memory of Rush went something like this:

I was spending the night at one of my best friends’ houses in elementary school. I believe we were wildly dancing around to Bon Jovi when her 4 or 5 year older brother passed by with a friend and made a rare acknowledgement of our existence. “Let me have you listen to real music.” We went to the other side of the house, to his dark and foreign room, where he played us some Rush. To my 9 or 10 year old ears, this sounded TERRIBLE. “This is horrible!!!” we said with wrinkled noses, and we ran back into the arms of Bon Jovi and delved back into a land of fantasy dates with long haired boys who rode motorcycles and played guitars.

While I still haven’t grown out of that phase, I did circle back to Rush several years ago. I think it had something to do with the documentary, that is just magnificent, and also finding out a few years ago that my friend’s brother committed suicide. For some reason I always associated him with Rush; in fact that’s how I organize most people in my head…by ‘their’ bands. She’s a NIN friend, he’s the Metallica guy, she’s a BRMC girl, his favorite is Depeche Mode.

About a week ago I started thinking about going to see Rush, and once I expressed interest a whole slew of people egged me on and a few locals wanted to join me. It would be the day of the show that I would spring for the ticket, an expensive $180 to be fairly far away….but this might be my one and only time.

It was my second time in a week to set foot on something I’d heard about my whole life but never been to, and still haven’t exactly been to: Universal Studios. My unconventional childhood vacations were spent at auctions and antique stores and gun stores. The concentrations of both males and Rush shirts increased as we approached the Gibson. And once inside it wasn’t long until it all began.

It was immediately apparent where that $180 went to. A movie began on the giant screen, a spoof band called Rash which featured members of the band as anything but band members. And then the sheets came off the equipment and we all became part of the Time Machine. There were cogs turning everywhere; things were spinning and illuminated. And then there were the three old dudes on stage, playing some of the most technically astute, complex yet straightforward metal that I’d ever seen in person. These are three guys who are the exception to the rule: they somehow remained immune to the decadences of rock ‘n’ roll, yet they have maintained the attention and respect of their fans and continue to produce great albums. And that comes down to one thing: these are three guys who are the best at what they do…they are musician’s musicians….which fits nicely with what I saw on Saturday. A scan of the audience revealed that the sea of screens I usually see had been mostly replaced by air drummers. I’ve never seen so many in my life, but one in particular caught my eye. He was in the front row of the front left section, and his movements were dead on mimicry of Peart’s. I imagined it was Jason Segel.

Rush’s music has a science fiction vibe; this was the ‘Time Machine’ tour, and along with the fact that the Moving Pictures album was about to be performed, an epiphany that I’d been having over the last week completely solidified.

I recently finally watched Exit Through the Gift Shop, and while I didn’t love the film like most people, there was one statement that really resonated with me. When it is being discussed why Guetta constantly filmed everything, it is brought up that the reason is perhaps because he felt the need to capture everything, which stemmed from the death of his mother at an early age.

I guess you could say I have abandonment issues. These don’t stem from my family necessarily; my parents didn’t divorce. But I’ve never been close with my family, I don’t really have coworkers…all I have are my friends. But I don’t have any lifelong friends; you could divide my life into friend phases. I tend to have short term, intense relationships with people…and then they seem to burn out on me and slowly disappear. I guess that, in a more esoteric sense, my abandonment issues have more to do with happiness being such a fleeting emotion. Thus, for my whole life I have been obsessed with documenting the good moments. From the usual stuff like scrapbooks and zillions of photos of people who hated that I took so many pics at the time but always love it after to more current things like Facebook messages and digital files of every text I’ve received in the past three years. I’ll look back sometimes and think about someone who used to be a huge part of my life that just disappeared; the Danish exchange student who I spent my entire Senior year in high school with, the girl I went to ballet class with for all my single digit years, my high school to college boyfriend’s best friend’s girlfriend who commiserated with me for years about why we were stuck in such abusive relationships. It’s those pre-Facebook era relationships that are always a mystery to me….now you can tell when someone drifts away that it’s because they went into a relationship coma, or got a new crew, or flat out deleted you. And Facebook makes it really easy to construct a life of those happy moments; you’ll rarely ever see me post about the sad ones….it allows you to create a great facade. And then there’s this site, which is really more about me documenting my experiences than reporting on anything in a traditional sense. The rambling point regarding all of this is, music has always been the filter in my memories. And while the Rush guy, the Tupac girl, the Debbie Gibson kid, and the Smashing Pumpkins chick might go away, the music will always be there. Always.

After an intermission, the band launched into Moving Pictures, which begins with ‘Tom Sawyer’, the Rush song everyone knows. That’s a song that sounds like nothing else, it’s a weird track that crosses a lot of genre territories. A couple songs later, ‘YYZ’, which shows off the rhythm, timing, and diversity of the band. But my favorite track is ‘Witch Hunt’, which stands out as the slow ‘thinkpiece’ of the album:

Quick to judge, quick to anger
Slow to understand
Ignorance and prejudice
And fear walk hand in hand”

I may claim to be transported at quite a few shows I go to, but this one was in a different way. As the screen on stage rolled back the years of the time machine, I could see the audience before me as they were long ago. Boys in bedrooms listening to records on large headphones, with dreams of being rock stars playing out in their heads. For most of the show they were in a trancelike state, but often would burst out in these hand gestures of pure musical ecstasy, trying to touch the music, the memory. To be a fan in a room full of fans, with that band you list on your Facebook profile as an identifier of ‘you’ before you; it’s a feeling unlike any other.

The drum solo. I’ve seen many, but not like this. It’s not showy; it’s honest. The screens capture many angles as we’re given a true demonstration of a genius at work. I’ve heard for decades he’s the best drummer in the world, now I have witnessed it for myself.

‘Closer to the Heart’ and ‘2012’…Geddy may be a vocalist who’s range sometimes makes me cringe; but you can’t deny it’s iconic. I’ve said it many times before, sometimes I don’t truly ‘get’ a band until I see them live…and that was definitely happening here.

I was pleasantly surprised with the pyro that came in during the last half or so of the set. I’m a big fan of fire + music….and apparently bands from foreign countries that begin with the letter ‘R’ are as well.

As the band wrapped up their impressive 25+ song set, I felt like I now understood ‘the world’s most popular cult band’. I happily now claim myself to be in the small group of chicks that dig Rush.

And after the show, at the only restaurant open at Universal Studios (the other HRC), I received a surprise merch item courtesy of my girldate: 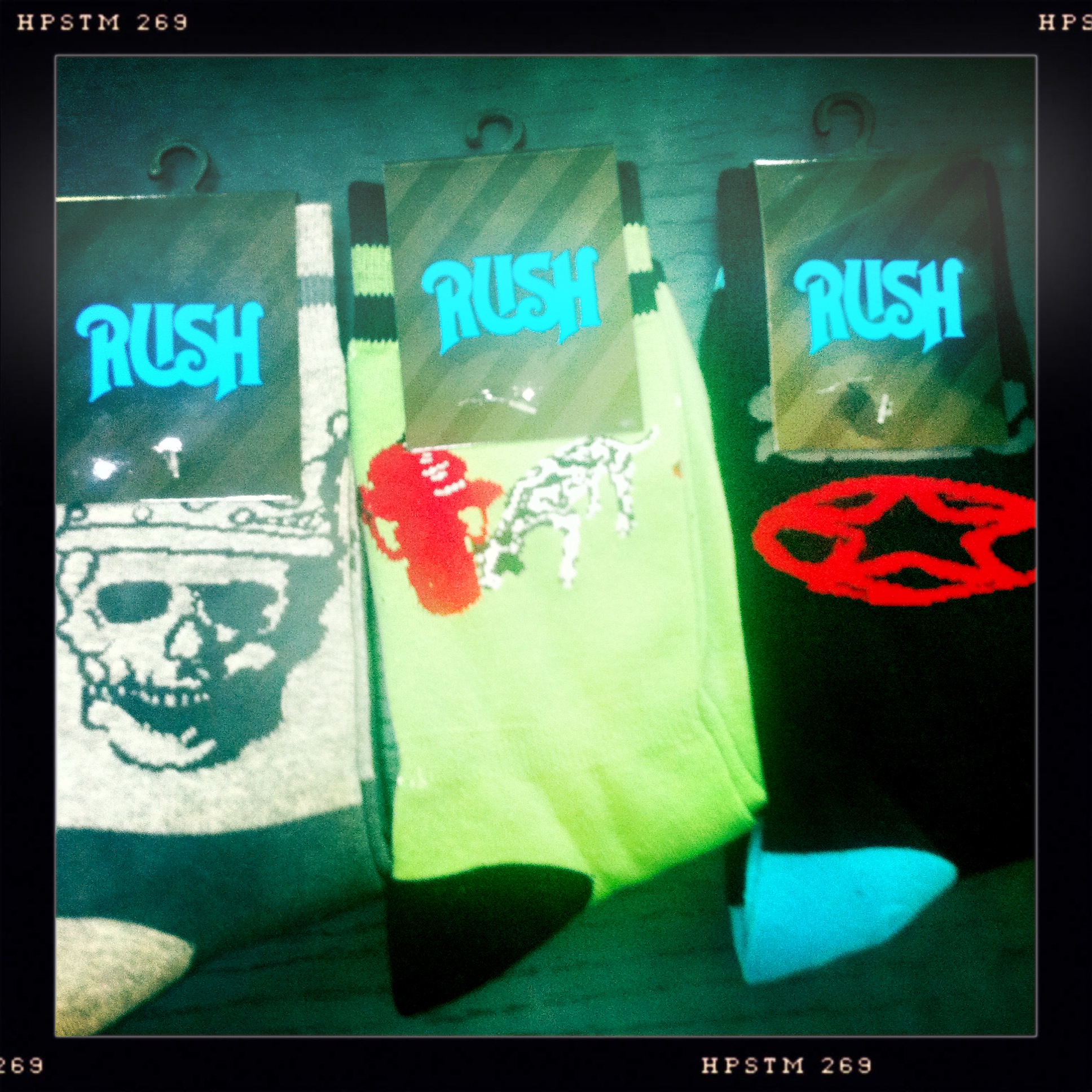 Author HardRockChick 2
I always wanted to be a scream queen. And, for one night in San Jose, my wish was fulfilled. Only the director was singing...
Read More
My Musical Adventures

Author HardRockChick 4
There was something about going to a MotÃ¶rhead show that inspired me to dress up a bit. So, I dusted off my skull-n-bones flashy...
Read More
My Musical Adventures

Author HardRockChick 1
Last week, I was given the opportunity to attend Crue Fest and interview one of the opening bands. While I’m not the biggest Crue...
Read More