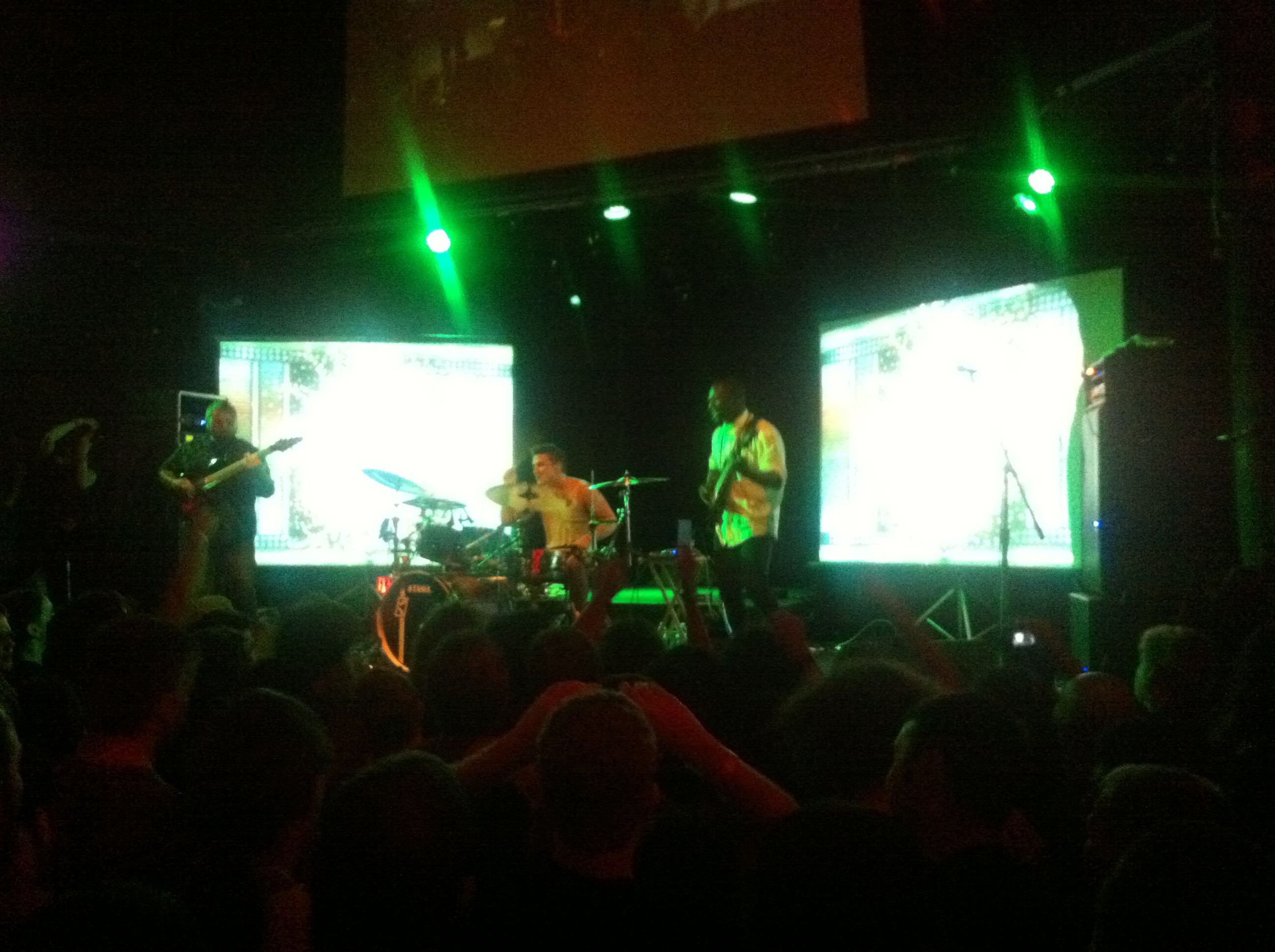 “How did you get into metal music?”

This is a frequently asked question, and my usual answer is that I always have been. But I think it’s more interesting to analyze specifically how the obsession started and how it morphed into what it is today, as I stood in front of a three piece playing super fast technical metal with atypical time signatures and no lyrics.

I think the first metal song I ever heard was ‘In A Gadda Da Vida’ by Iron Butterfly. My dad had the record and I thought it looked cool and contained the word butterfly. He warned me it would be weird and it was but then I became obsessed with the song and I still am to this day. I mean, WTF does the song mean anyway? But this gateway metal song with it’s psychedelic elements and stoner metal vibe would explain how my tastes evolved into Black Rebel Motorcycle Club/Brian Jonestown Massacre/The Dandy Warhols as well as Mastodon/Isis/High on Fire.

Then I got a little older and you couldn’t go anywhere without hearing about Guns ‘N’ Roses and Metallica…I mean, even my grandma knew who they were. While the rest of the kids were fawning over BOP and Tiger Beat with NKOTB, I had Rolling Stone and Headbanger’s Ball and Slash. This is where I really fell for it; enough of this kiddie bullshit…I liked the hard and fast stuff that made authority figures frown and scared my friends. I suppose this would be the time when some kids would decide that metal is not for them and never look back; while ‘November Rain’ and ‘Enter Sandman’ may have changed my life, it may have sent some kids running for the hills back to a land of Boys II Men and U2 (would you rather have your 12 year old singing a metal sounding lullaby or ‘I’ll Make Love To You’? Think about it!).

From there I got deep into ‘grunge’ and this is where I learned that the blanket term ‘metal’ encompasses a lot of different sounding music. It’s like a foreign language to an outsider….all the words run together when you don’t know what is being said. To the insiders, it’s more than just the loud and fast that they hear…they also feel it, and they think, and they explore. And for me this lead to White Zombie and Pantera and Nine Inch Nails and then to some unspeakable bands in the late ’90s until my taste in metal was cryogenically frozen for about 5 years. Then I started writing and searching and the next thing I knew I was into bands that screech and wear pig’s blood and corpse paint and even some that use keyboards!

Now that we have subgenres of subgenres of metal, the audience has become so fragmented that the likelihood of a band in a niche sub-subgenre taking off is pretty slim and must mean they are fantastic. That band would be Animals As Leaders.

For a year I have been hearing about them and trying to see them; at NAMM I couldn’t figure out how to get upstairs to where they were playing; at SXSW I had not one but two conflicts. Expectations were very high, especially in the week leading up to the show as I got more familiar with the band.

The Key Club seems to have become my new home which is nice because I was mostly flying solo for this show. The place was already packed as Evan Brewer of The Faceless walked out on stage. What followed was about a half hour of jaw-dropping bass work…in the times I’ve seen The Faceless I just couldn’t get into it but this interested me. Especially when he played two basses at once… 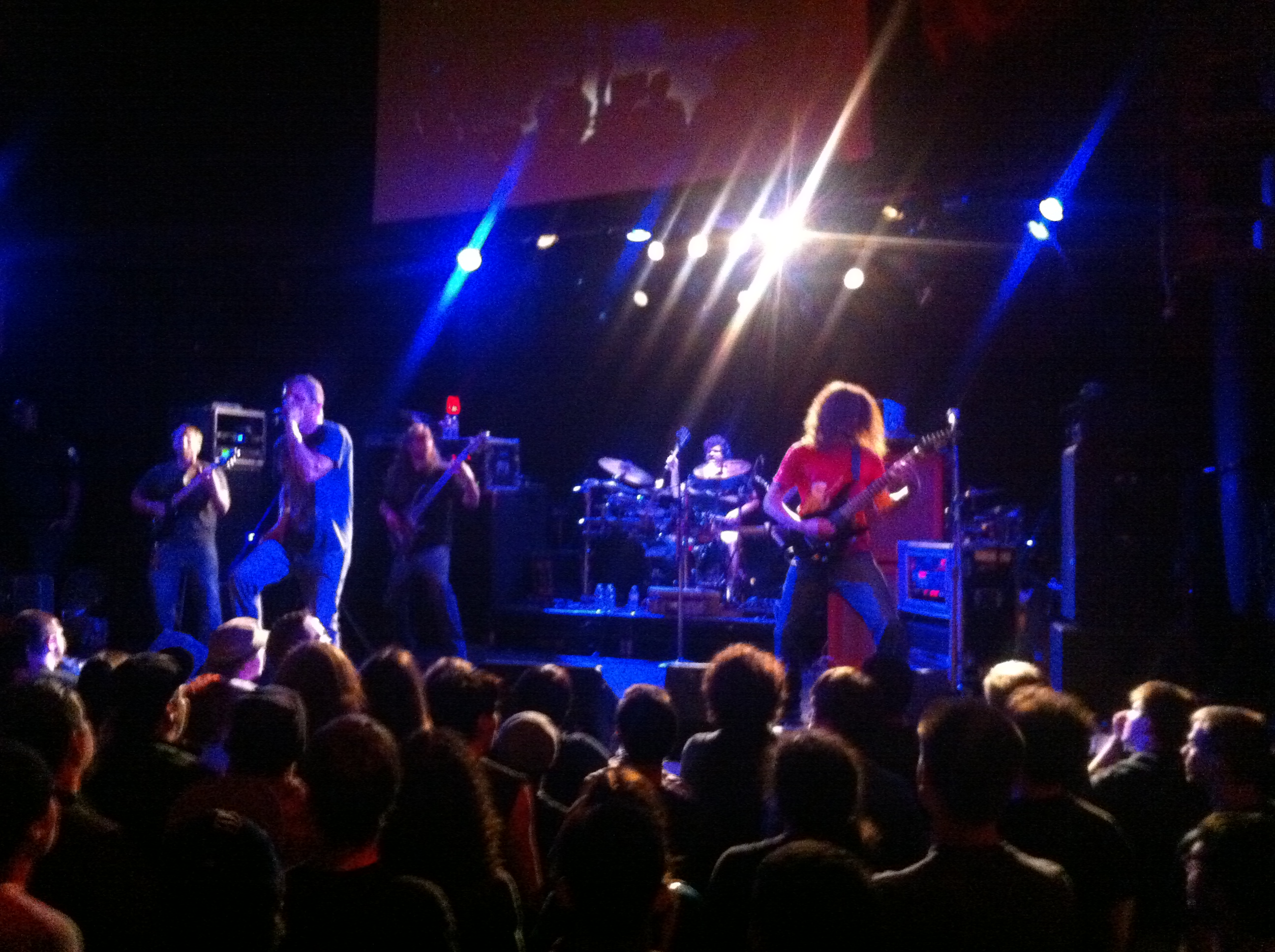 Next up was Last Chance To Reason. They are an interesting amalgamation of death metal, synths, and clean vocals…I felt discombobulated as they went from song to song as I didn’t know what to expect next. The vocalist really rubbed me the wrong way with how he would introduce songs with the echo effect…so I focused on the guitars and the guy in the crowd that had that incessant need to shake everyone on stage’s hand. 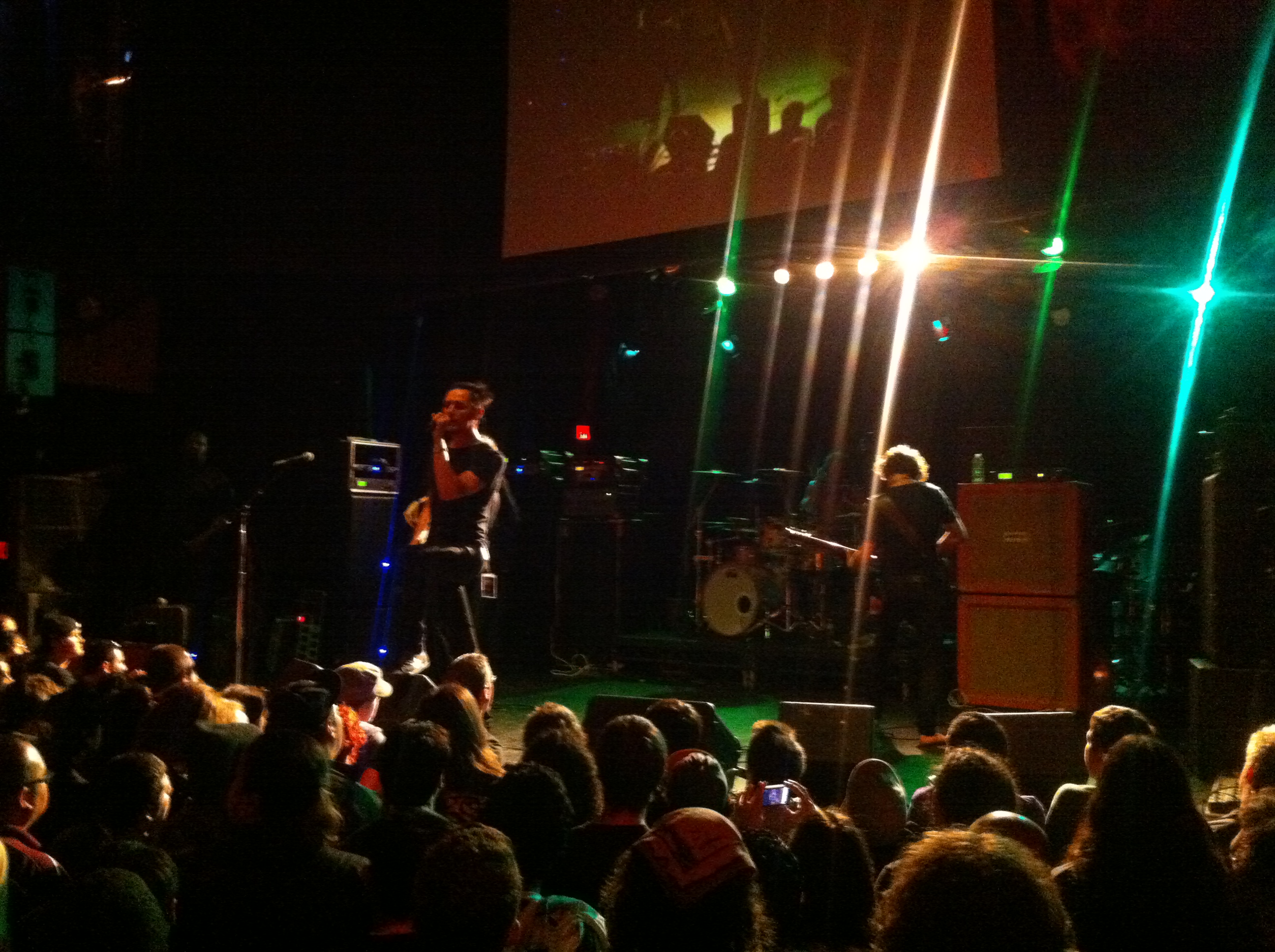 Dead Letter Circus, from Australia, put on a very engaging performance. However, I thought they were a really odd fit for the bill. Their pop metal sound took me to a different place than I knew I was about to go with the next bands.

This would be my first time seeing Intronaut since they opened up one of my all time favorite shows, Mastodon at Great American Music Hall. I have seen Intronaut described as many different things but my favorite is ‘hardcore experimental jazz band’. I am still in the process of warming up to them; some parts I totally get, some parts I kind of don’t. It was a heavy, heady set; and it was the perfect thing to get the crowd in the right frame of mind for what was next. 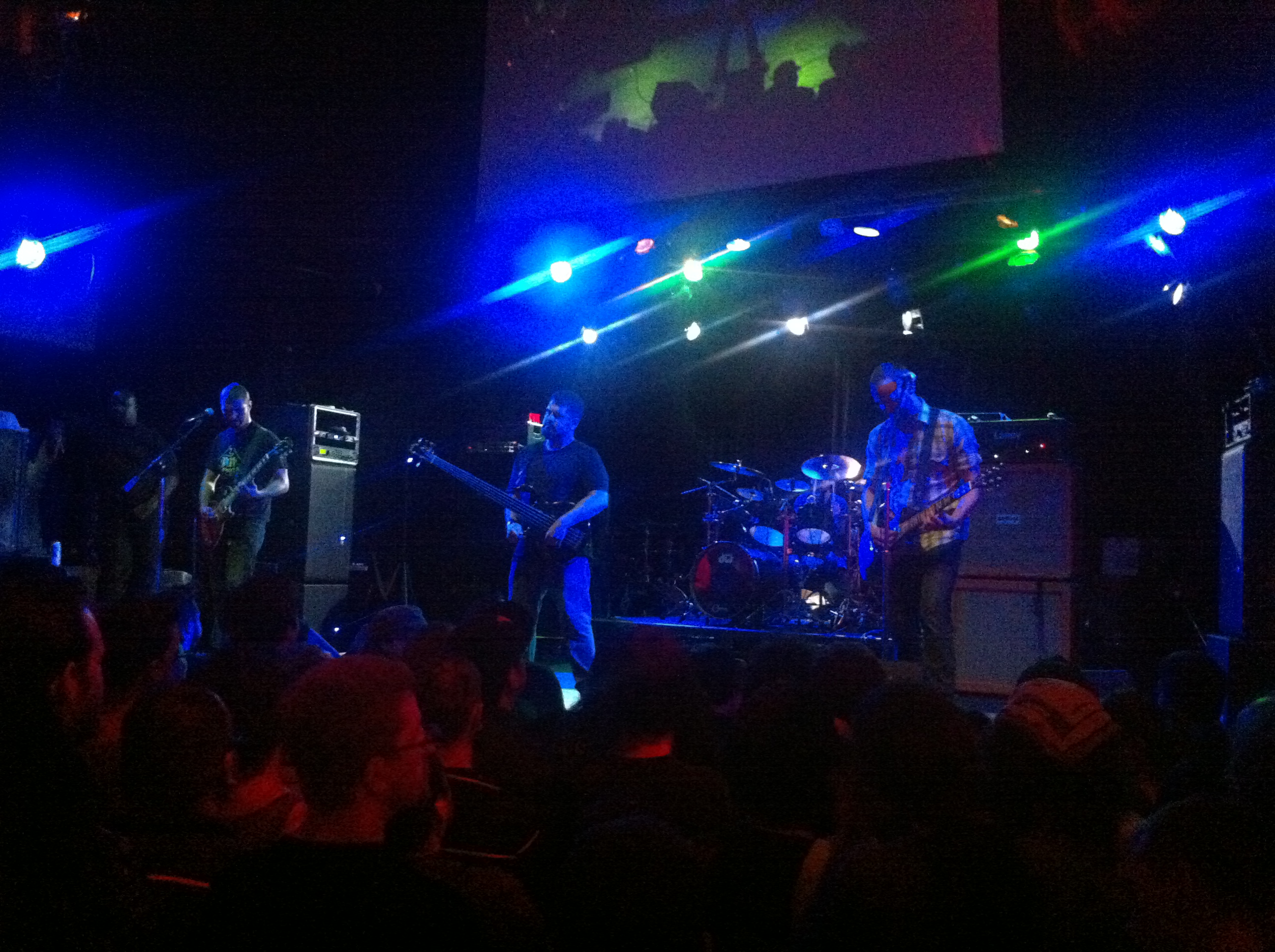 Animals As Leaders is a band you can’t truly ‘get’ until you see them live, probably so that you can see with your own eyes that the playing is not sped up. There was something about the way the stage was set, with two screens playing rather minimal imagery and then the three musicians set up close to the front on display, that made it seem futuristic. When they began the crowd exploded in a frenzy, which was kind of a mismatch to the controlled speed on stage. There are some bands that I’ve seen who’s speed seems to be all they’ve got, but with AAL the songs actually go somewhere, and that’s without lyrics to even guide them. I was thinking about their similarities to some Dillinger Escape Plan stuff when Tosin, The Guitar Player (who got marriage proposals from men in the crowd), thanked DEP for having taken them out on their first tour, and then I saw Greg Puciato’s tweets from the show. A look around showed the diversity of the crowd, most with their mouths ajar at the technical prowess of the band. This was full on geek out nerd metal. I was surprised by how much Tosin still moved around even though his playing is so technical!

All the sets seemed really short, so when the show was over I moved down the street to the Roxy where a friend had alerted me that a metal meet-up was happening, and I happened to meet one of the hosts from That Metal Show. Then I went to a bar with my girlfriends where we- no joke- danced to ’50’s and ’60’s music and I actually did The Twist as riffs still ricocheted around in my head.