Somewhere deep in LA pop culture history will lie the memories of the weekend of what was deemed ‘Carmaggedon‘.

I started hearing about it as soon as I arrived, and the hysteria the week leading up to it was mind numbing. My opinion on the matter was this: every day on an LA freeway there is potential for Carmaggedon. So I proceeded with life as unusual.

Nearing the end of this fateful weekend, we all knew traffic was actually better than any other day because people were scared out of town and into their homes. Thus, we found ourselves flying south down the I5.

The destination was an event I was made aware of through Facebook called Uncle Paul Fest. I have no idea who Uncle Paul is, but I know who Imperative Reaction is, and that was one of the bands playing. There was no venue name, just an address. It was all kind of mysterious, which generally leads to a good adventure, if you go with it.

As we went deeper into the OC, we passed an actual Memory Lane and got deep into a residential area. That’s when it hit us that this might be a house party….we really had no idea. As we got closer we heard screaming, which might deter some but made me feel better that we were in the right place. And it was a street lined with auto body, tow truck, and mechanic’s shops. At least it was a warehouse of some sort…I mean, after seeing SHAT in a basement in industrial San Francisco I can pretty much handle anything.

We walked into the yard of this place and into the hardcore and industrial OC scenes. We kind of cowered together as outsiders as we took it all in. What was before us, which would be explained by the Suffer Well screamer during their set, was an authentic DIY scene show. No permits mean the cops could come at any time…there wasn’t any alcohol…hot dogs were being sold in the corner next to a bit of merch…and in many ways it seemed like a family affair. 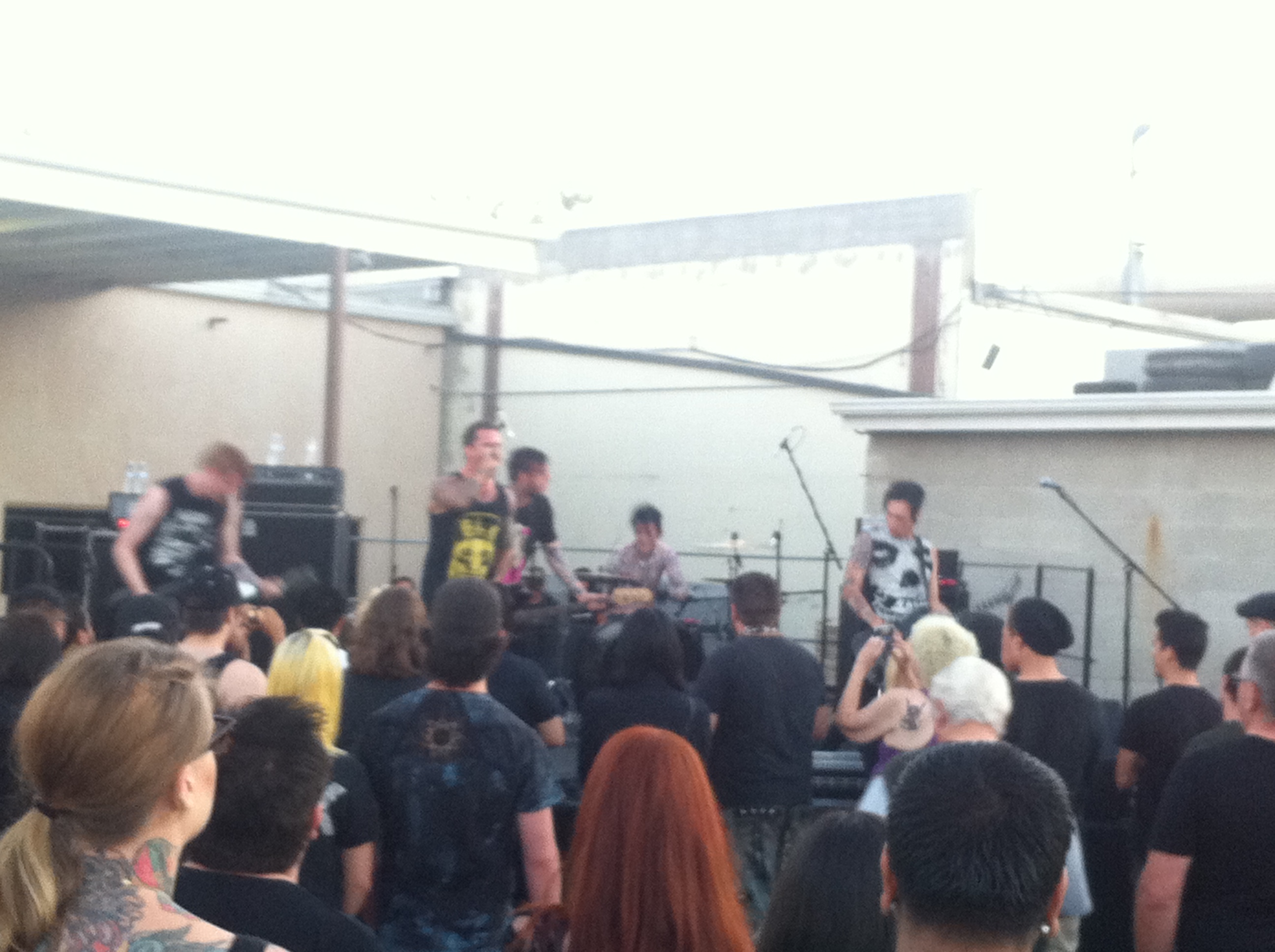 The two bands I would see shared several common members, but the one I know is Trevor from Combichrist, who recently did my tattoo. I also knew that Suffer Well is a hardcore band, which is a genre I’ve only dipped my pinky into. I also know it’s the name of a Depeche Mode song. So I will sum up the way I felt about this set by saying that frontmen make or break a band….and he just didn’t do it for me. As the sun went down, I wondered how we would even see Imperative Reaction on stage due to the lack of lights. The last time I saw the band, Joe Letz from Combichrist was on drums. Industrial is one of my favorite genres of music…and even though we were in a pretty industrial environment, I wasn’t sure how this set was going to go down. It’s a testament to how great this band is that they were able to make it mostly work given the circumstances: a hardcore leaning crowd, a mic that kept going out, no fancy lights, zero acoustics. Vocalist Ted Phelps always impresses…he has these Robert Smith tones to his voice that infuse this often cold genre with some semblance of a soul. My friends that I had somehow convinced to go with me to this had probably been questioning my taste until this set, and they aren’t even into this type of music. Hopefully I’ll catch IR in a proper venue when they play again in October.

We were under attack by mosquitos, so we called it a night before the headliner, Bleeding Through, hit the stage. We giggled all the way back to LA, even after stopping at one Walgreens and three gas stations in search of libations, only to realize that the OC is a dry county or something. We may have survived Carmaggedon, but Alcoholmaggedon…..

Author HardRockChick 0
My ears are still ringing. Last time I saw Autolux was a Noise Pop show in 2007 at The Independent. Their set was cut...
Read More