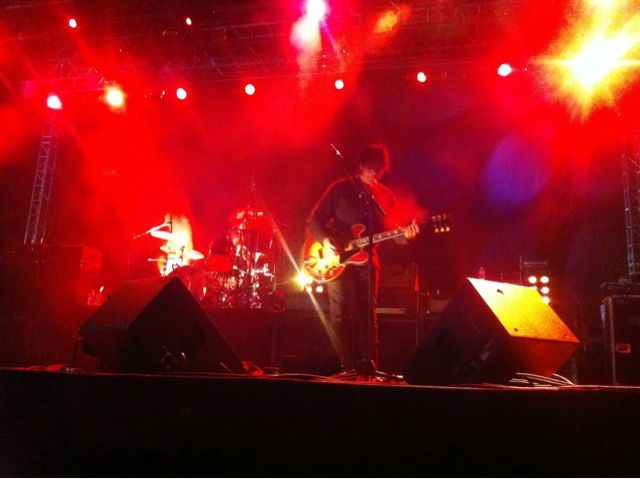 Everything always has to happen at the same time.

We were all set to spend a weekend in Seattle when it was announced that Black Rebel Motorcycle Club would be playing a show at…a race track….in San Diego. Â Next thing you know, we’re adjusting flights and hotels, because when your band plays anywhere within a 100 mile radius, you gotta go. Â We are the people who keep the music industry in business.

Still high off A Perfect Circle from the night before, it takes me two mothertruckin’ hours to get to Huntington Beach, providing me with five minutes to jump in my friend’s car, turn on my laptop, and take a work call from the road. Â The things we do for music….then it was more traffic as we headed south with the bikini clad weekenders as we are swathed in black. Â As we get there and walk towards the race track, a couple asks us if we are here for the concert, and what band is it…and when we tell them they start laughing hysterically. Â I guess we don’t look like we fit in.

I hadn’t been to horse races since I was little, and a race was going on as we walked into the structure. Â I got to experience a taste of a race as we bypassed it to wait in line for the show. Â San Diego apparently has a lot of BRMC fans as everyone raced like horses to the rail. Â The stage was super high and the cold ocean breeze raised goosebumps on my arms; it was just like my BRMC/STP show in Corpus Christi.

After a long wait filled by people watching, eavesdropping, and silly picture taking, the band came on to play what was probably the weirdest set I’ve ever seen them do. Â The whole thing felt like BRMC on fast forward, which is perhaps the only thing it had in common with playing at a track. Â “I have no idea what our band has to do with horse races, but apparently you get it” said Rob. 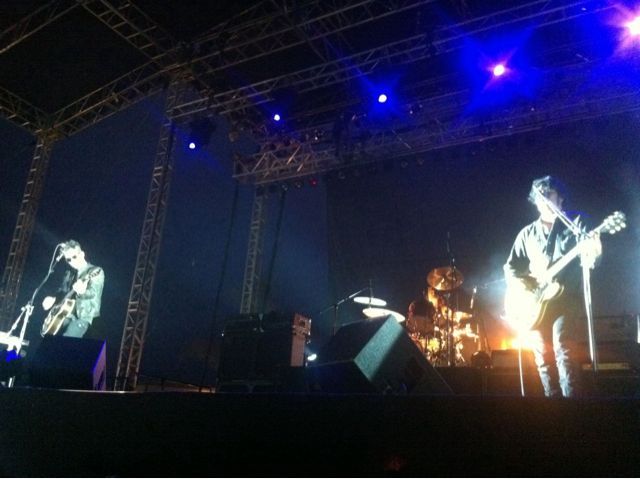 The songs themselves seemed paced differently, and they didn’t embellish on them like you normally see in their sets, the most notable being ‘Red Eyes and Tears’ sans the reprise. Â About four songs in, they “took a giant dump on stage” as Peter Hayes said, when they messed up the beginning of ‘Shuffle Your Feet’. Â Apparently someone forgot which song they were playing….so they moved it to a different part of the set.

Needless to say, the band was still great even if not as on their game as normal. Â The crowd was really into it, more than I expected for this strange environment. Â I heard a few songs that I hadn’t heard them play in a while: ‘US Government’, ‘In Like The Rose’ (awesome guitar), and ‘Weight of the World’ (featuring Peter dangling a cigarette out of his mouth while singing….no comprende).

It was nearly a full set, but it still felt odd as they finished by 10pm. And this time after seeing them, I didn’t win a guitar. Â It was a long way back to the car, where we happened to walk out with the winner of the Cougar pageant and her young lover….I’m not even joking here, seriously, there was a Cougar pageant that same night. Then it was time for a long drive back to LA, and a 7am flight in the morning….

Author HardRockChick 4
I’m standing in line outside Slim’s, hearing the low roar of The Faceless inside, and I’m getting frisked hard. The will call line and...
Read More
My Musical Adventures