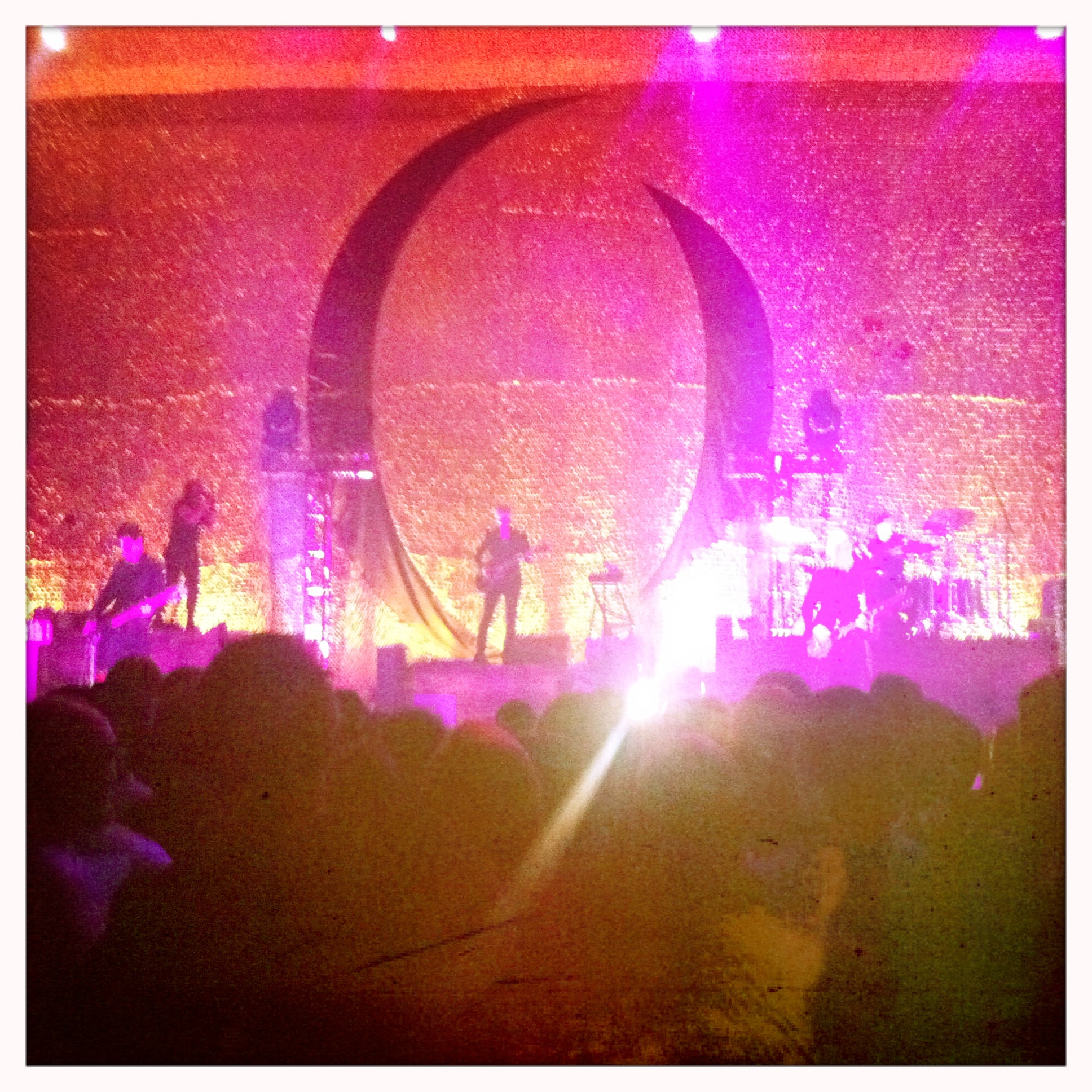 I didn’t think it could get any better than the three November Avalon shows.

After hearing each album in it’s entirety, I went into this show feeling like it might be a bit anticlimactic. Â I got to see the near original line up in a fairly intimate venue play every song….now what? But what I experienced Thursday night made it all come together.

The sun was setting over LA as we pulled into the special people’s parking lot. Â Checking in backstage there was a funny sign comparing the performance that we were about to see to a film or opera. Â I’m not a stranger to shows involving Maynard James Keenan; I know this to be true.

I skipped the opener to enjoy a cup of champagne while band members milled around. Â After saying hi to friends, we went down to the tiny pit. Â This was my second time to the Gibson; I realized it was a fantastic venue up in the seats for Rush, but it was even more amazing in the pit. Â Perfectly sloped, I could see everything from the back of it, and would soon experience probably the best sound I’ve ever heard.

This would be my first time seeing MJK where I could actually sneak a few pictures and didn’t have the show nearly ruined by security pulling people out for cameras every five minutes. Â The stage was simply set with five stations like last time, with the parameters encased in a white mesh and the APC logo emblazoned at the rear of the stage. Â The soundtrack to the Sound of Music began and I’m singing ” fa…a note to follow so!!!” until I quickly get sick of it and am ready for the real sound of music to begin.

Like Soundgarden last week, anticipation was high as it appeared to be many people’s first time to see APC. Â I felt privileged to hear my two favorite voices in the span of a week; but tonight Maynard’s moved me to tears. Â It was that beautiful…sure there was other stuff going on there that caused it, but the words and the voice…and the champagne…just made it all particularly moving. Â APC’s music is one that is a conduit for feeling to me. Â The music and the lyrics are deeper and more personally relevant to me than a lot of other bands.

The band was absolutely on fire. Â It immediately became so apparent that those Avalon shows were just a warm up; it was like seeing a completely different band. Â Granted the drummer was different; in a controversial maneuver, Josh Freese skipped this tour to play with Weezer. Â But I didn’t mind, it’s no secret I’m a huge fan of Jeff Friedl, who was an obvious replacement as part of the MJK band family.

I was expecting a setlist heavy on Mer de Noms for some reason, what we got was heavily weighted with covers and Thirteenth Step material. Â I never listen to Emotive, so sometimes the songs seem like new ones to me, as I get lost in the way the band sounds rather than what song it is…I didn’t even realize they were playing Depeche Mode. Â ‘When The Levee Breaks’, now that’s another story. Â

I love the way that the band is given equal weight on stage, where each member has their delegated space to do their thing, together. Â I would have to say Billy Howerdel stole the show this time around as he walked circles around the music, almost fighting with his guitar. Â He did have his guitar swapped out more than I think I’ve ever seen before.

It’s rare that I experience a show and have the sound feel like I’m wearing headphones. Â Usually I’m moved by being so close to the band and seeing every perfection and imperfection. Â This time I had the best of both worlds, resulting in the transcendental experience that has eluded me lately at shows. Â Perhaps it’s burn out, but it’s been really hard for me to get into shows lately like I used to. Â This one was taking me whether I liked it or not; the near religious experience was actually not pleasant, but at least I felt something.

It was the kind of show where afterwards I needed another drink. Â The backstage bar was a total scene; while waiting to get another cup-o-champs, I gave a dude who wanted to talk to Kat Von D a pep talk, and proudly watched him go up to her as she was next to Danny Lohner. Â The only other member of Ashes Divide who isn’t in APC was there, as was Danny Carey and the tallest guy I think I’ve ever seen in real life.

Scenes from the show danced around in my head all night, even though the rest of it was even more intense than the show itself.

Author HardRockChick 0
Tonight made twice in one week that I tested out new venues in SF. And let me tell you, Hotel Utah is an odd...
Read More
My Musical Adventures