I’ve got two words for you: Sunset Strip.

What comes to mind?

Somewhere in the plethora of imagery that these two words evoke for me lies the words Motley CrÃ¼e, Jack Daniels, and Sex, Drugs, and Rock ‘n’ Roll.

The story of my experience at the Sunset Strip Music Festival could probably best be described with a string of slightly incoherent but spiritually connected words like these, along with The Rainbow, tits, Ron Jeremy, cops, pyro, VIP passes, and beards. But that’s not what this site is about. 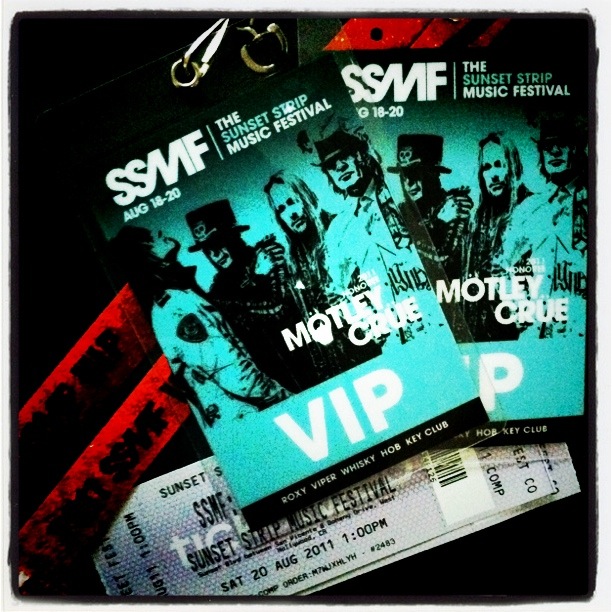 Truth: I don’t like festivals. In all honesty the only real music experience I had during three days was watching The Faceless at The Whiskey after drinking a lot of whiskey. I used to not like The Faceless but apparently they sound really, really good 5 drinks in.

But wait, I skipped something. It all began when I stepped out of my car at the House of Blues on Thursday night. It was a star studded night to pay tribute to the honorees of the festival, Motley CrÃ¼e.

I like Motley CrÃ¼e a lot…I know pretty much all of their songs. However, they’re not the kind of band that I would claim to have changed my life in any way, but I would say their existence in my musical life is absolutely necessary. They’re the band that did both everything right and everything wrong and somehow lived to tell the tale. It’s lowest common denominator metal in the best possible way; it’s mood music for metalheads trying to communicate with non metalheads. I mean, everyone can get down to “Wild Side”, right? As the CrÃ¼e sail over the hill and sex, drugs, and rock ‘n’ roll become something more like Viagra, Boniva, and classic metal for their fans, it was prime time for them to be honored for being a part of the music era we both love & hate, ’80s glam metal in Hollywood.

An hour before the show was an open bar sponsored by Jack Daniels. “When you have known him as long as I have you can call him John”. I don’t know what it is about free drinks that make me drink more….but it did…and before I realized it the tribute event was starting and it flew by as an exciting but blurry hour of laughs and one unbelievable music moment. Oh, and I found Jesus! 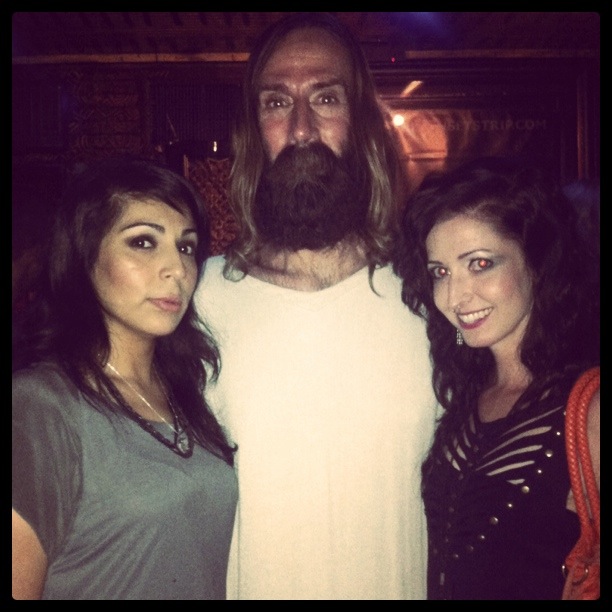 Kennedy from the old MTV VJ days was one of the hosts, and it was funny to see her after all these years. I wanted to be a VJ so badly, but it was also one of her interviews with Johnny Rotten that still to this day flashes in the back of my head when I stand next to an interview subject (he yelled at her and walked off). The pinacle moment of the weekend was standing a few feet from Ray Manzarek when he sat down and played parts of ‘Light My Fire’ and ‘Riders on the Storm’ on the keys. I can remember seeing The Doors movie with Val Kilmer and becoming obsessed at age 13 or so and listening to The Doors over and over again trying to figure out why I was so attracted to tragic rock stars. He also told us to take acid and a bunch of other stuff that I can’t remember because of the combo of John and the fact that Manzarek was standing right in front of me. 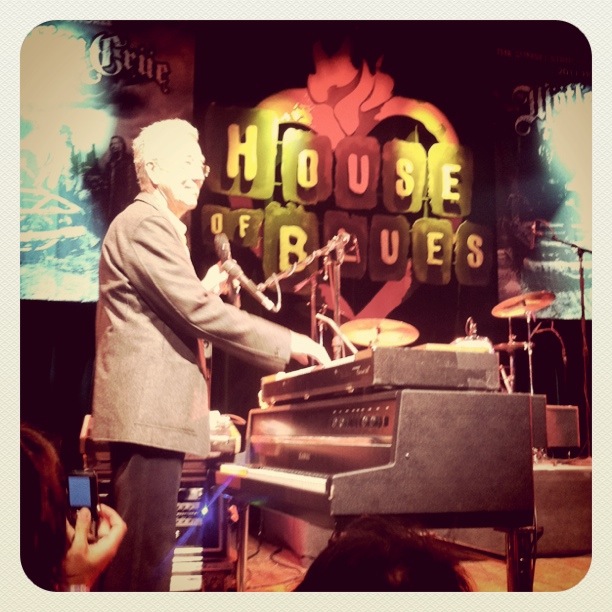 Then Neil Strauss came out and read off some highlights from the infamous Motley CrÃ¼e bio that he wrote, The Dirt. One of my lofty goals as a writer is to write a band bio….maybe some day. Then Dane Cook came out and roasted the CrÃ¼e…I remember thinking everything he said was hilarious, or it could have been John, since I don’t normally find him funny. Then David Johansen from the New York Dolls came out and talked about existentialism which was met by blank stares by most of the crowd but I appreciated it. Nic Adler was somewhere in there, too. Then The CrÃ¼e came out to accept their award and the tribute was over at the very un-rock ‘n’ roll hour of 9pm. As I fetched my car, DJ Ashba was behind me, and then as I valeted down the strip, he pulled in right behind me…I see that guy everywhere I go in LA!

After dinner at The Rainbow where we said hi to Ron Jeremy and spotted Metal Sanaz, we watched The Faceless at the Whiskey and then I got to go to the Viper Room for the first time. I remember stroking the guy at the door’s beard and then having a surreal experience once I stepped inside because going there has literally been on my to do list for almost 20 years. When I was 13, I had ‘shrines’ to 2 people in my bedroom: Kurt Cobain and River Phoenix. So when they both died about 6 months apart, I was devastated. In all my time in LA I had never found a show to go to there, but tonight felt right for some reason. I watched my friend’s nephew’s band, Nude, who’s guitarist looks like a mini Robin Finck.

The festival seemed to be off to a great start for me, but unfortunately Friday’s experience took that all away. As VIP badge holders, we didn’t know that the clubs also sold individual tickets to the shows. So, the one we wanted to see on Friday, Ray Manzarek and Robby Krieger of The Doors, sold out, and we weren’t guaranteed entry. Seems kind of odd to me…but we wanted to go badly enough that we stood in line for 3 HOURS and unfortunately weren’t let in. The Whiskey didn’t even have the decency to communicate anything to us towards the end, we just started to hear the band play and all sighed at the loss of our time that night. You win some and you lose some..I win a lot so I swallowed my pride and accepted it. So we went to The Hustler store across the street instead and had a very educational hour. 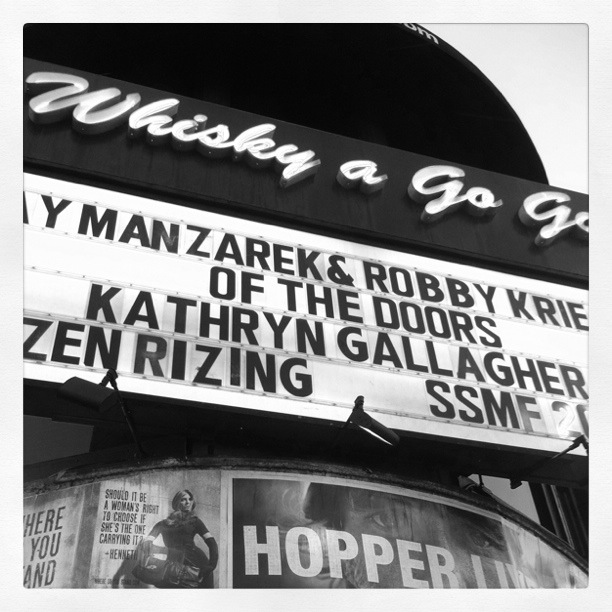 Saturday began at 2pm because I wanted to see Black Veil Brides kick off the main stage. As our cab pulled up to the entrance we caught a (presumably) homeless guy hop off of a trash can and pull up his pants after using it as a public restroom. Hollywood….what’s your dream! It was quick to get in as VIPs, and we made our way down to what is normally the parking lot of the Key Club, which became our home for the next 8 hours.

BVB have created quite a sensation in their short amount of time. They’re like a KISS/Manson hybrid through the lens of these more scene-y metal bands. There’s a lot of murmurs around town about whether or not they can actually play, and how much of their live show is really…live. I’m not a fan of their music, but I don’t care who you are, if you are able to get kids to buy into your scene enough to walk around in copycat facepaint and merch already, you are doing something right.

She Wants Revenge was a strange follow up to BVB, but not as strange as having that followed up by Escape the Fate. As I ate half of a Grill ‘Em All veggie burger and indulged in more John, I got ready for a surreal full circle moment in HRC’s music history.

I can remember how excited I was to go see Bush at Sunken Gardens in San Antonio in 1995. I was 15, but my parent’s had already bought me a car and I had a learner’s permit that allowed me to drive with my 18 year old boyfriend since they were so busy with their business and didn’t have time to play taxi. I don’t know what they were thinking…but who cares! To be 15 and have everything be a mystery….my first rock show by myself was something that felt more like a rite of passage for me than anything else I had done. I was smitten with Gavin Rossdale and I can remember stepping into what I would soon learn was The Pit to get a closer look and *woosh* my 100 pound frame was knocked to the ground by something I would learn was called a Mosh Pit. A big guy bent down and picked me back up and I went back to the perimeter, where I have stayed ever since. It was exhilarating, and in that moment perhaps I saw my future in some weird way.

So there was Gavin Rossdale looking almost the same 16 years later, playing with a new line up. I haven’t listened to much Bush over the years but I remembered almost every word. And I didn’t have high expectations for this set, but they sounded great, and Rossdale’s energy and ability to engage the crowd was something fierce. That Gwen Stefani, she’s a lucky girl.

As people ran off to see Public Enemy (kiiiinda wish I had), I held my post at the front of the VIP lot for CrÃ¼e. The sun went down and it was cold. I had seen Gene Simmons milling around with his daughter, of course DJ Ashba was roaming around, as were several other people who I have no idea who they are but I see them everytime I’m on the Strip.

When CrÃ¼e came on, I settled into their funtime set; the spectacle, the crowd, the whole raunchy vibe. But to be honest, CrÃ¼e aren’t the tightest band live. I was more impressed at the crowd’s ability to completely dismantle a tree in front of my eyes than I was with the playing going on onstage. That said, the drumcoaster was pretty rad, and the whole symbolism of being on the Strip watching Motley CrÃ¼e felt very iconic. I rolled my eyes when they poured buckets of blood on the crowd, though…leave that to GWAR, please.

You can read my more ‘official’ account of the day on the GRAMMY blog here.

As we left the Strip, I thought about how when you love something, it’s for the ugly part of it as much as the beautiful side.