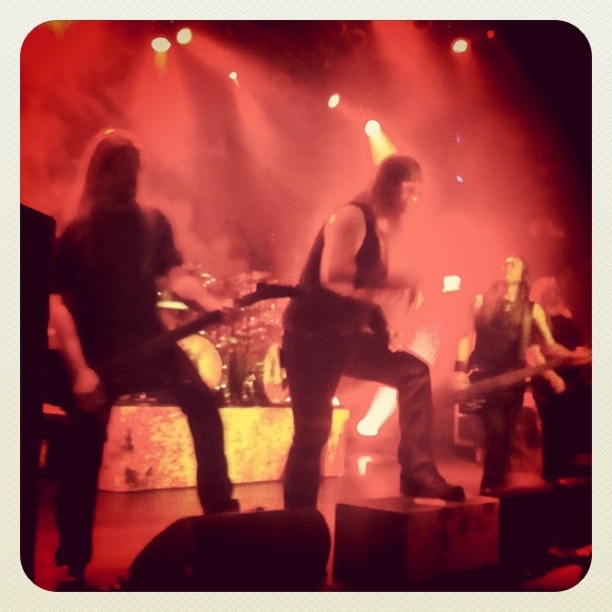 ~”The Pursuit of Vikings”, Amon Amarth

It was supposed to be my last night in LA.

Thank Odin it wasn’t! I feel like I’m just getting started. So what was supposed to be my goodbye party turned into an opportunity to cross something off my bucket list.

We arrived at Disneyland and walked through what looked like a church camp event to get to the House of Blues. Funny to see kids with mouse ears give way to dudes with Viking helmets. As soon as we got inside it was time for the band to begin…perfect timing!

This was the same ‘Evening with Amon Amarth‘ that I had seen earlier this year: they played their latest (and greatest) album Surtur Rising in it’s totality and then took about a half hour break before coming back for another full set of greatest hits. It’s a crushing set that I was happy to see again. Between Johan’s bellowing interludes, the enthusiastic yet respectful metal crowd, the pseudo-intimacy created by the House of Blues set up, and, of course, the quality music, it is one of the best tours out there right now.

Business must be good in Viking land, because Johan was definitely in a heftier form at this show. The band as a whole looked road-weary, but it did not dampen the set one bit even though I’m sure they have to be getting sick of playing the same 2+ hour set every night. On this night, I split my time three ways: watching the performance, watching the crowd, and eyes shut banging my head.

What is the perfect metal show? There’s an certain alchemy to it, and here is my personal formula: 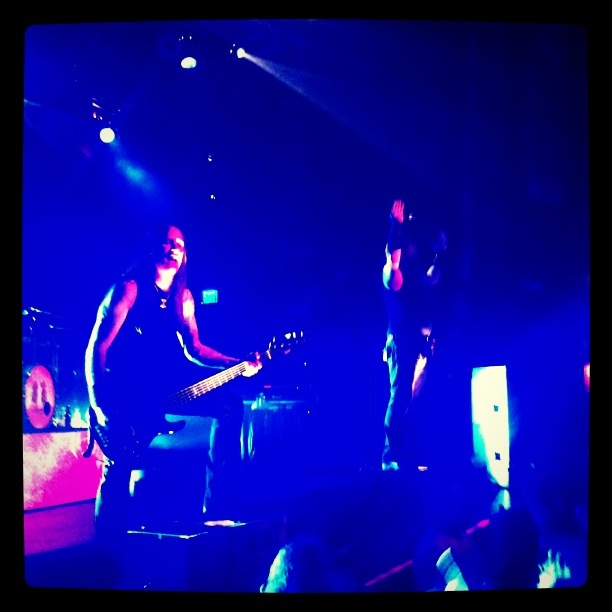 Oftentimes you remember your favorite shows because of that last point, which is often driven by something the band or crowd does. Remember when the dude from Marduk did a wrestling move on someone that jumped on stage? Remember when NIN played The Downward Spiral unannounced? Remember when that chick climbed down from the balcony at A Perfect Circle and turned out to be the former bassist? Remember when an entire bag of weed was thrown on stage at Willie Nelson? Remember when that guitarist played completely naked? That stuff.

But on this particular night, I will remember this show forever because of something I did.

I was originally planning on crowdsurfing for the one and only time at NIN’s final show, but things got so messy with all of that, it didn’t happen. Then I considered it for Soundgarden…but the crowds were so awful. As with everything in my life, I really overthought the whole thing….I don’t want to kick someone in the head, or fall, or get groped…but it had to be a band I really like. It was settled about a month ago that it would happen at Amon Amarth, who’s fans as a whole seem to be very respectful.

Then it was time to think logistics. If I’m gonna do this, I need photographic evidence. I need to not have anything in my pockets or have my bag. And it has to be the perfect song. And how the hell do I even get started???

Luckily I had Capital M to hold my stuff and video and Julia to lead the maneuver as a more experienced crowdsurfer.

During the final encore, we made our way into the pit, and stood by the mosh pit sort of gaining energy from the swirling mass of moshers. And then, as “The Pursuit of Vikings” began, we basically told the guys around us that we wanted up, and as if that was the most normal thing in the world, they just lifted us up in the air and about 2 seconds later I was in the arms of a security guy. WHAT A RUSH! But, like the two times I’ve gone skydiving, that just wasn’t enough….so we ran around the venue and this time went all the way to the back of the floor. Then we were hoisted again for a longer and more exhilarating crowdsurf.

One of my natural highs in life is planning and executing something, and this went off perfectly! Minor casualties included a busted lip and a giant bruise on my arm….a small price to pay to the Norse gods. It was also neat to experience a concert in a new way…after hundreds of shows experienced from almost every other perspective except actually playing on the stage, it was refreshing to feel something new.

The best things in life are the things you get super nervous about and almost back out of before you do them. In the past two years I’ve pushed myself out of my comfort zone so much that I’m more comfortable being uncomfortable because I know the reward is worthwhile. Life is too short; every week I try to collect at least one story that will stay with me for the rest of my life. And the time I crowdsurfed to “The Pursuit of Vikings” definitely ranks up there.

Author HardRockChick 5
On what would have been Johnny Cash’s 78th birthday, Black Rebel Motorcycle Club kicked off their tour in Sacramento, sharing new songs from their...
Read More
My Musical Adventures