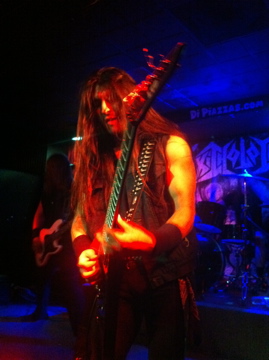 As I gathered my things to make the trek to Long Beach, I read the news about a widespread blackout in Southern California. Long Beach could be included in that…would that mean tonight’s show would be canceled?

I’ve had about 5 failed attempts at seeing Holy Grail. The last time, I walked in as they were playing their last song. Luckily, nothing was affected….traffic was even better than expected.

As we pulled into the parking lot of DiPiazza’s, it looked like a mini modern day version of Heavy Metal Parking Lot. Only this time, the fans mingled amongst the bands, who’s vans and trailers were parked amongst us common folk.

DiPiazza’s is a restaurant/venue…a pretty awkward L shaped space that can make viewing the band difficult. It appeared that a security person stands on a table and holds onto a poll to monitor pit activity. After being there a little while, it became kind of charming….but the bands that played are much better than this place.

I had an interview with Holy Grail, and while vocalist Luna and guitarist Eli and I were walking over to a well lit area, they waved hi to the vocalist for Krum Bums, who was squatted down shaving outside their van….seriously! And by the time I finished the interview and went inside, there he was screaming onstage. That’s hardcore. 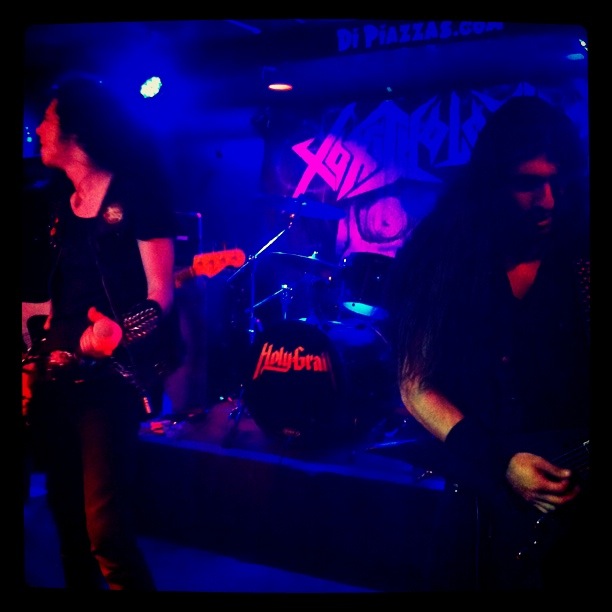 We squeezed up to the front for Holy Grail…it was after 10 but because this was a pizza place the joint was full of underaged folks….metal on a school night! The fivesome had to squeeze to make it work on that stage, especially with the gentle giant Johan Hegg doppleganger Blake Mount on bass. As they began I instantly knew they were everything I had heard about live and more; controlled chaos are the words that come to mind. Even though they were on too small of a stage and I could tell their energy was bottled to a degree, they scorched that pizza place with enough heat to bake 1000 pies.

Standing before guitarist Eli Santana, I was able to completely zone in on his shredding skills. I love seeing people’s involuntary movements when they play; Eli does something similar to people who move their lips when they read. To me it’s a sign of ultimate concentration, which is mandatory with the speed his fingers fly around the guitar. The band as a whole really have some moves…sometimes I thought Luna’s head might fly right off!

As we all sang and raised our fists for “Fight to Kill”, I had a strange moment of clarity. In my immediate vicinity were members of other bands and fellow metal bloggers and photographers. We’ve all made a lot of sacrifices to do what we love, and while it isn’t easy…what’s better than getting crazy on a Thursday night in Long Beach at a pizza place to Holy Grail? Not much….not much at all.

Author HardRockChick 1
Thereâ€™s something highly comical about seeing Dethklok, Ted Nugent, and now She Wants Revenge at The Fillmore in the span of two weeks. Different...
Read More