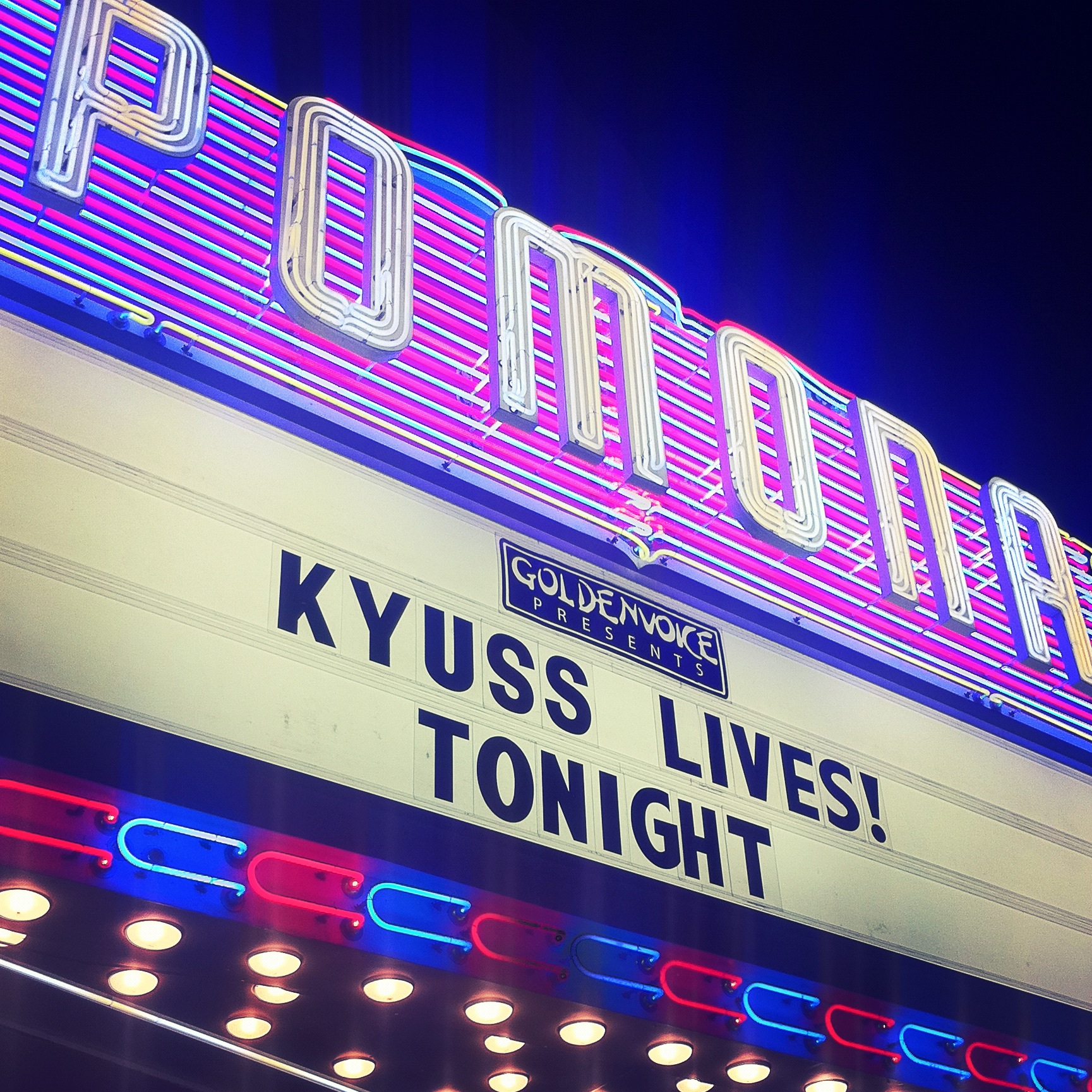 As I made my way to pick up my copilot to venture to the outskirts of LA, I passed something very fitting: 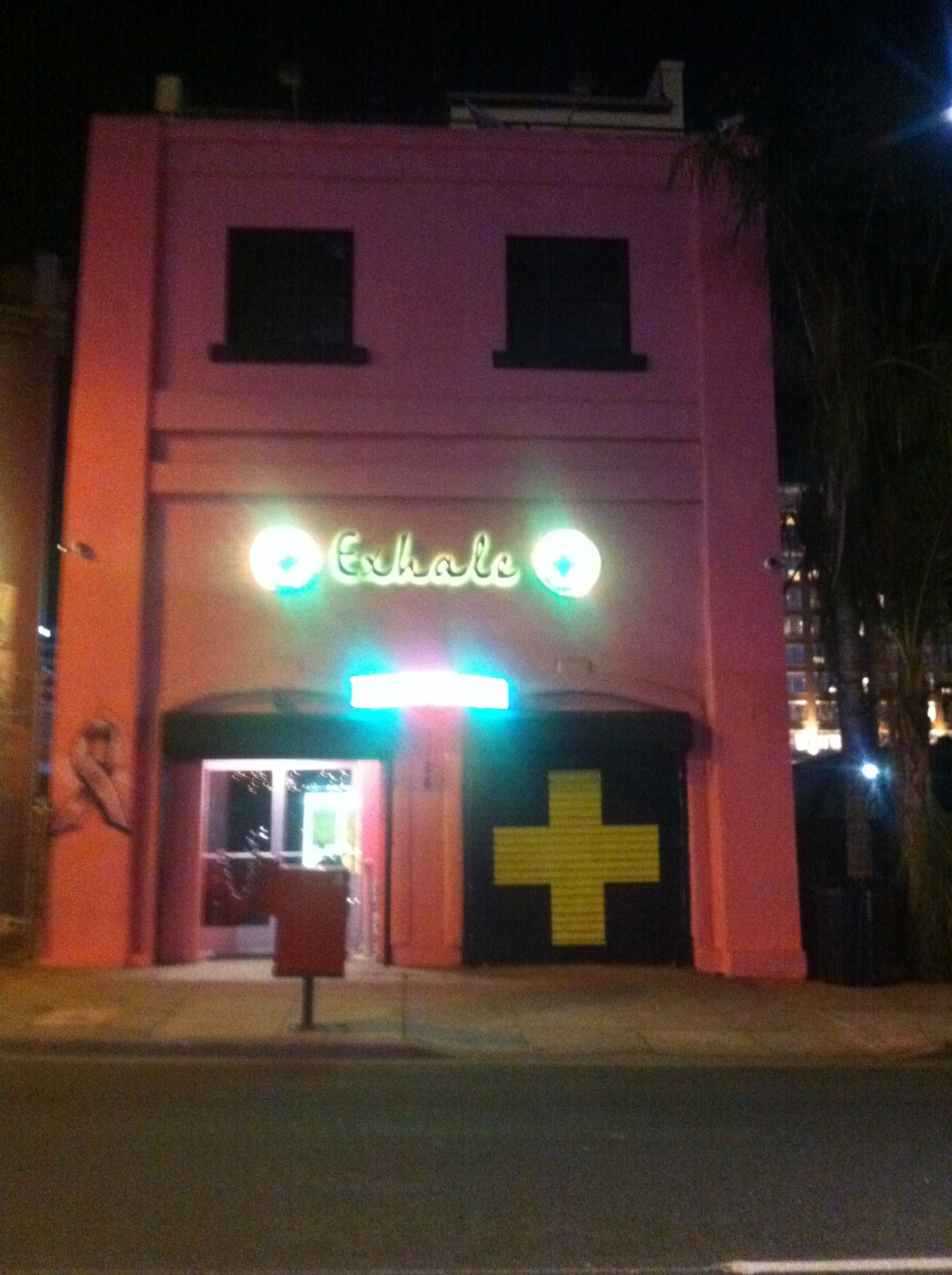 Pomona is a world away from LA; it was my first time out there and in typical small town fashion there was a street fair going on next to the venue full of families and teens having a quaint night out. Then we had to walk by a club with rap music and a bunch of Jersey Shore types to finally get to ‘our people’, who were making their way into the venue away from popular culture and into the warmth of our own little type of counterculture.

I had frequented the beautifully remodeled Fox Theater in Oakland many times, so it was interesting to see what it must have looked like before renovation. It was definitely much less special, but regardless I much preferred it over The Wiltern or Club Nokia who limit their pit capacity to some ridiculously small size and basically ruin my night.

The Sword took the stage shortly after we arrived. The Sword are from my home turf in Austin, and even though I spent a year back there recently, I was never able to catch a show. In fact, standing there, I realized that I hadn’t seen them in almost three years, opening for Metallica. And that made me pissed off all over again because when my ex-boyfriend and I split up, I let him keep that drumstick he caught for me, which I’m willing to bet he just threw away, because he really didn’t care about that kind of music. Anyway…even with a new drummer, The Sword still sound amazing and I enjoyed the new songs more after hearing this set. We stood in front of baby-faced guitarist Kyle Shutt and let those tones wash over us. As I banged my head along to these geekily-themed songs, I thought about how important it is for bands to tour…I had almost forgotten how much I love The Sword, their music slowly collecting dust as each year passed since I’d seen them play. Now I’ve been listening almost non-stop, and I bought a shirt after the set, to go with my guitar pick I fished off the floor. And I also remembered that when I have a mini-me, she’s probably going to be named ‘Freya’. It was the perfect opener for what was next. 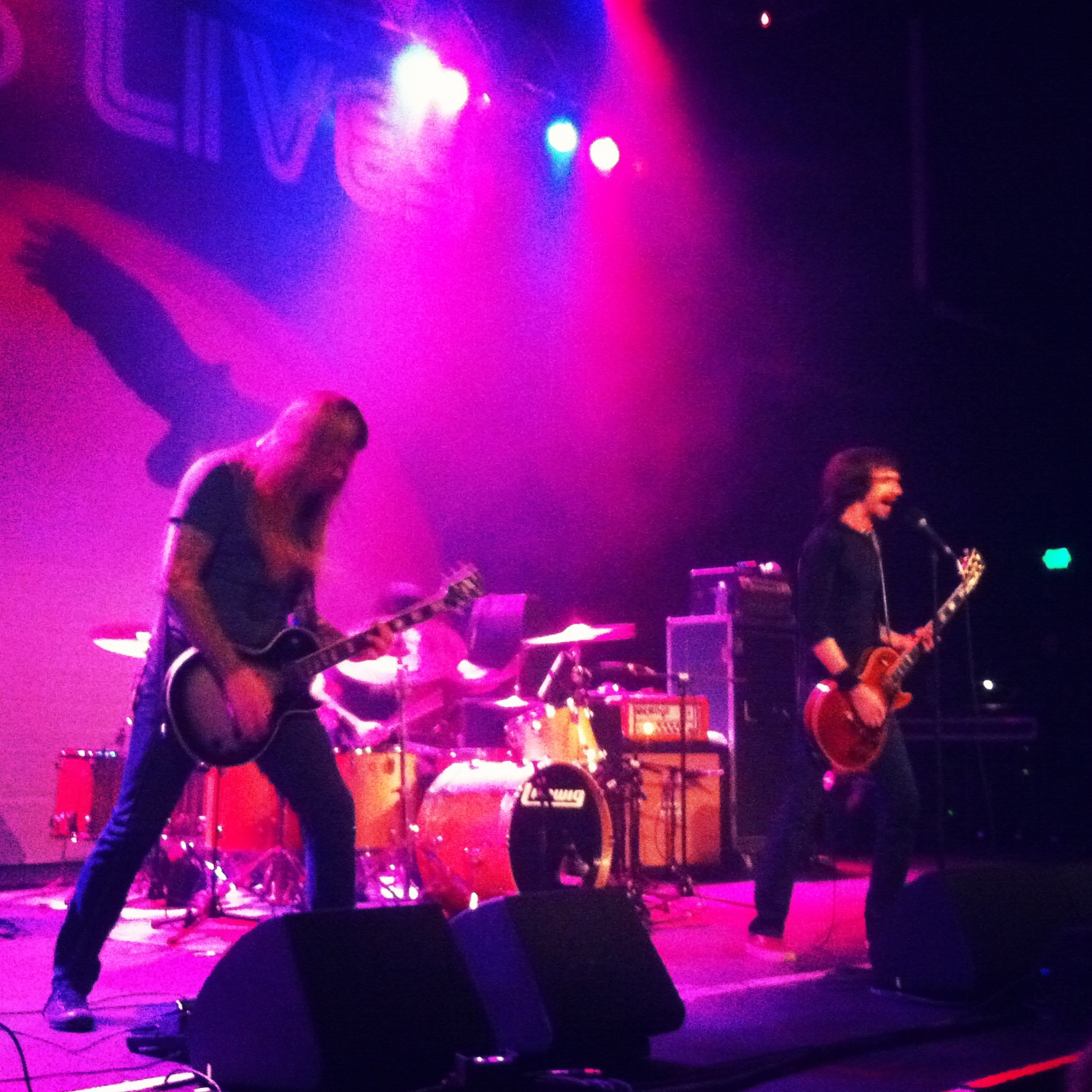 Kyuss are kind of like the band version of The Outsiders; a band whose members went on to form other great bands. I never really thought I would ever see them…but that’s the beauty in today’s otherwise dismal music industry; lots of bands are getting back together, to make some cash. Yes, I KNOW, Josh Homme wasn’t going to be playing guitar…but to hear these songs live I could forgive that element.

Beginning with the first song off of Sky Valley, “Gardenia”, everyone started grooving with excitement. Those that tried to enhance that experience by lighting up a joint were treated to having security reach in and pluck it from their hands, which led to me laughing watching a security guard walk the photo pit with this smoking contraband to dispose of it. That would NOT happen in San Francisco; they just tell you to wait until the band comes on and the lights go down.

Each band member seemed to be in their own little zone; I especially liked watching Brant Bjork on drums. He uses huge sticks and somewhat reminded me of videos I’ve watched of Bonzo. And then of course I have to mention Nick Oliveri on bass, who could very well spend the rest of his career in jail after his hostage situation in July. I’m surprised he can even tour…I guess they aren’t playing any Canada shows! Bruno Fevery on guitar had a muted, contemplative energy about him…I always feel a bit sorry for people who even though they pull off their role in the band impeccably, everyone will view him as a fill-in. And John Garcia with those distinctive vocals; he almost took on an altered personality when he let his hair down towards the end of the show. 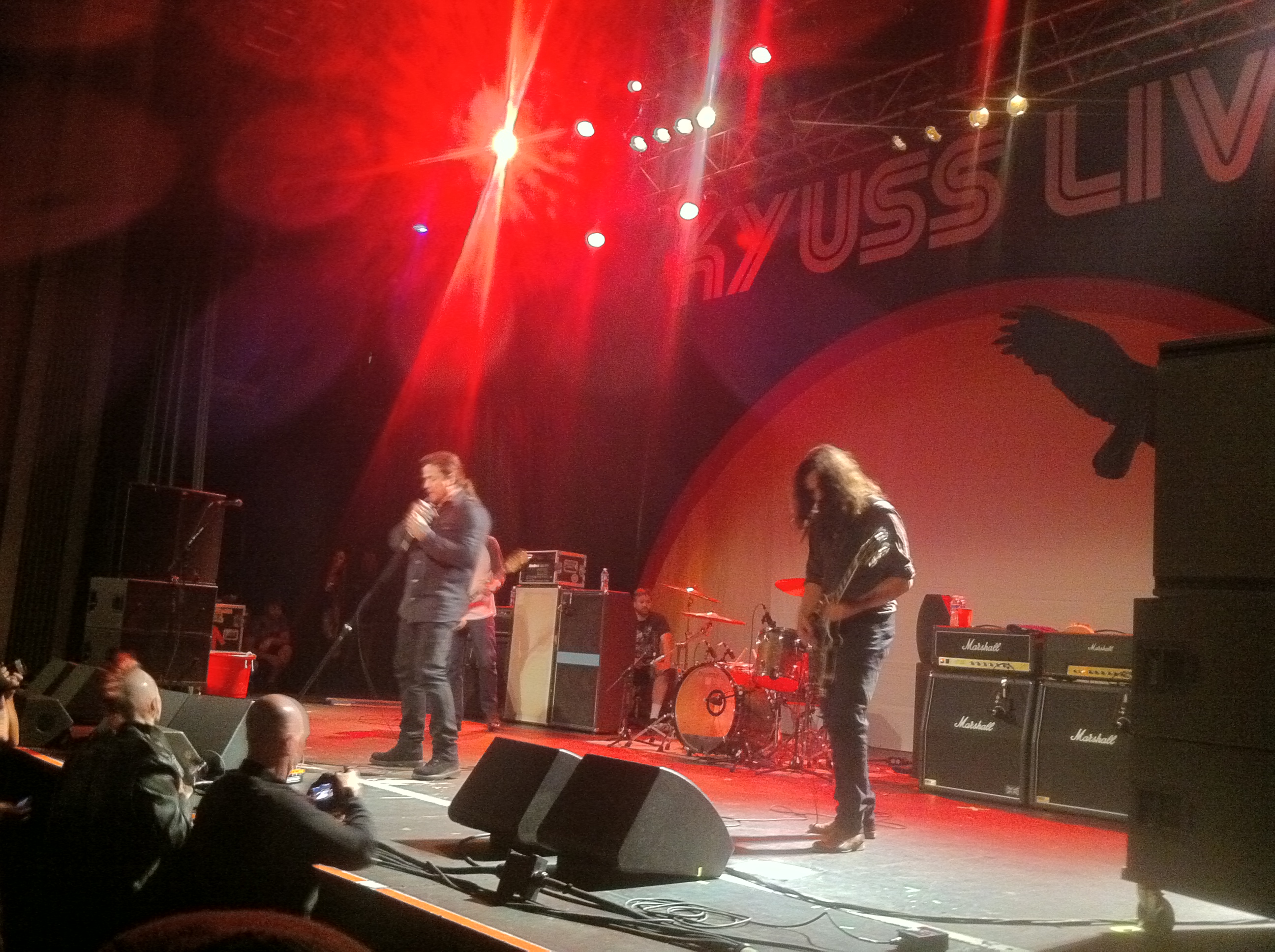 There was one point in the set where the crowd got kinda rough; someone almost gave us extra excitement when he jumped onto the barrier and got a foot on the stage, but alas security was all over it. That wouldn’t have happened had you let them smoke weed in there!

I enjoy shows like this because there’s a vibe about it being special. It’s a Saturday night in the desert; and the crowd is a mix of long time fans who are witnessing something again, and probably reliving their old times with the band…and then there are those of us who are seeing this for the first time when we thought we might never experience. It made for a great show. 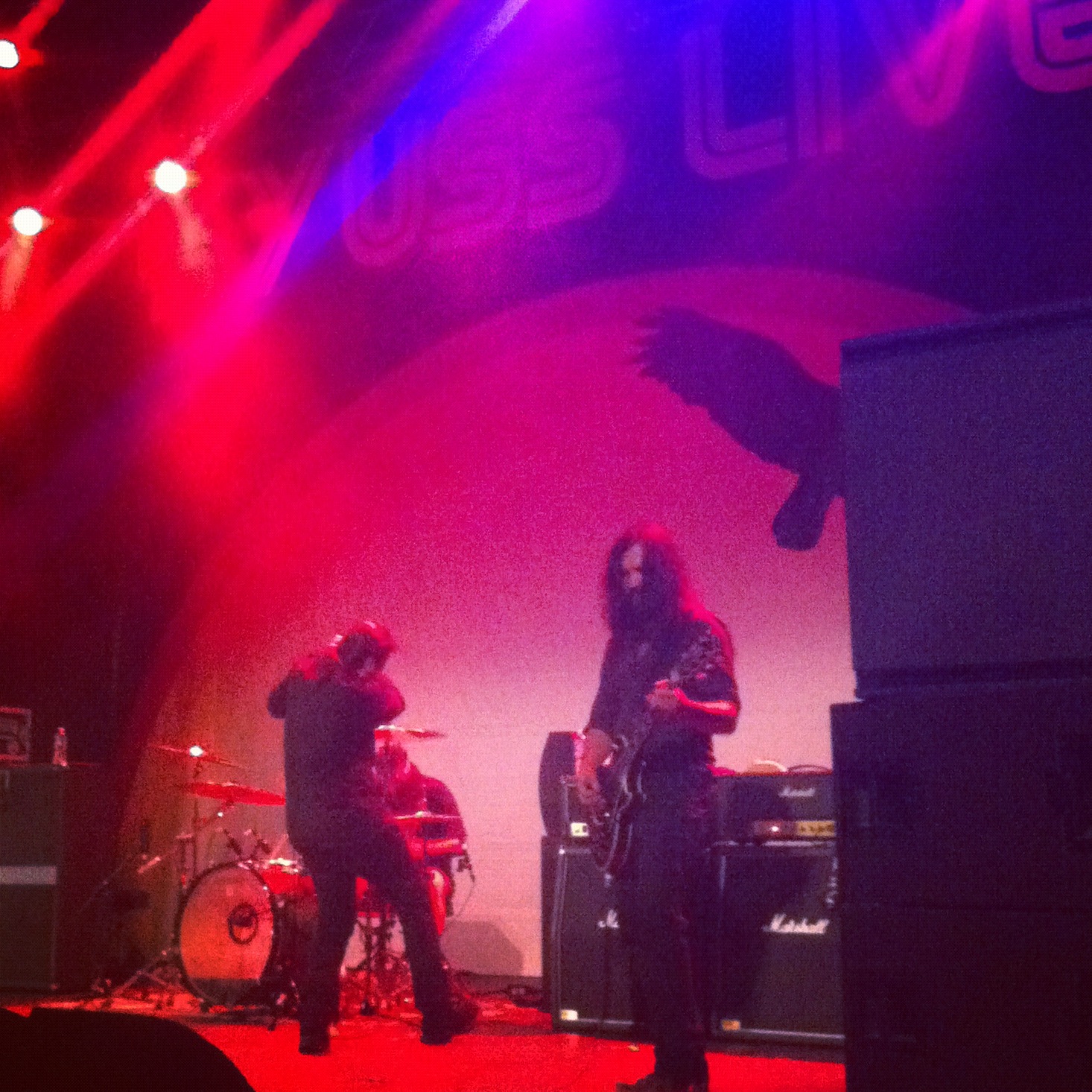 And afterwards, we hopped over to Corona, where we entered a party in full swing at the house/studio of my more death metal orientated drummer friend. Sometimes life becomes just like high school again…and I don’t mind it one bit.