This was one of those nights where there were just too many options for shows to go to…Judas Priest in San Bernadino…Anthrax in downtown LA…Primus at the Wiltern. After weighing the options, I decided on the less obvious one: Immolation at Chain Reaction in Anaheim.

Sometimes you just want to take the road less traveled; that was the case for tonight as well as the fact that I wanted to hear something really, really heavy. The sound of death.

You see, it’s all starting to sink in. In just a little over a week’s time, I will be leaving LA behind to go back to Texas. The past five months have been some of the best in my life, but as anything good that happens to me, it can’t last. I have to go back to my homeland and figure out ‘what to do with the rest of my life’; part of that includes another month long soul-searching expedition in faraway lands and then a self-appointed month long house arrest while I write my first book. That month will prove to be most difficult for me, as I have to relive everything horrifying about my past few years. Suffice it to say, I’m not looking forward to it…but I know that it will ultimately be a cathartic experience. 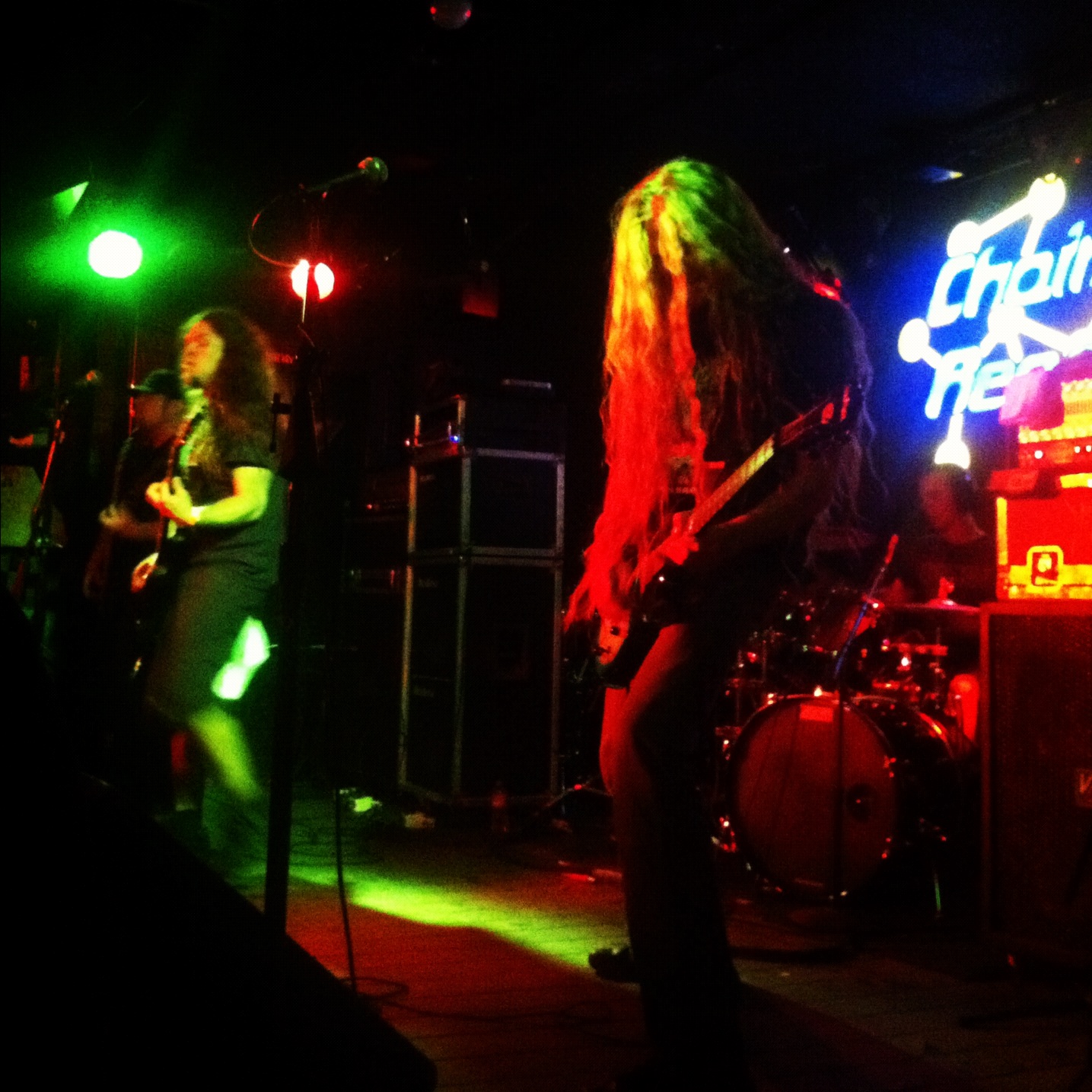 I’d heard terrible things about the Chain Reaction. It’s an all ages venue that doesn’t sell alcohol in the OC. As soon as we pulled into the parking lot, I felt like we were going to a show at the end of the world. Any time I’ve been to a venue that doesn’t sell alcohol, I’ve seen people that are more fucked up than any normal place. And that was definitely the case here…as indicated by the amount of people hanging out in their cars in the parking lot. Especially our next door neighbor, who came to be called ‘Inquisition guy‘.

Once inside, I surveyed the crowd as a support band finished a set. Everything seemed weird to me tonight. I felt like I was amongst a crowd of rejects; everyone was creeping me out; all I wanted to do was go home and take a shower. I hid behind my hood and thought about where my life went wrong.

However, once Jungle Rot came onstage, I felt much more at peace with my decision to go to this show. The band has a groove edge to their death metal, and the pit started to swirl in response. The amount of hair onstage flying around was admirable; we’re talking waist length here…even I had hair envy! Early on in the set, Inquisition guy started jumping on the stage. He started by just getting up there and jumping off…but he got a little ballsier each time, and by the end of the set, after close to 10 times on stage, he was hitting the cymbals of the drum kit with his head before jumping off. Seriously! I’m not sure why Jungle Rot allowed this..perhaps their massive amounts of hair prevented them from seeing what he was doing.

Once Immolation hit the stage, Inquisition guy tried to continue his antics, but guitarist Bill Taylor was not having it. He literally used his axe to prevent Inquisition guy from coming onstage, along with giving him an evil ‘don’t fucking think about it!’ leer that reached me all the way in the back. Beginning with “Majesty and Decay”, the sound of Immolation shrouded the room with their intoxicatingly evil sound, making our caffeine and sugar highs seem less than innocent. 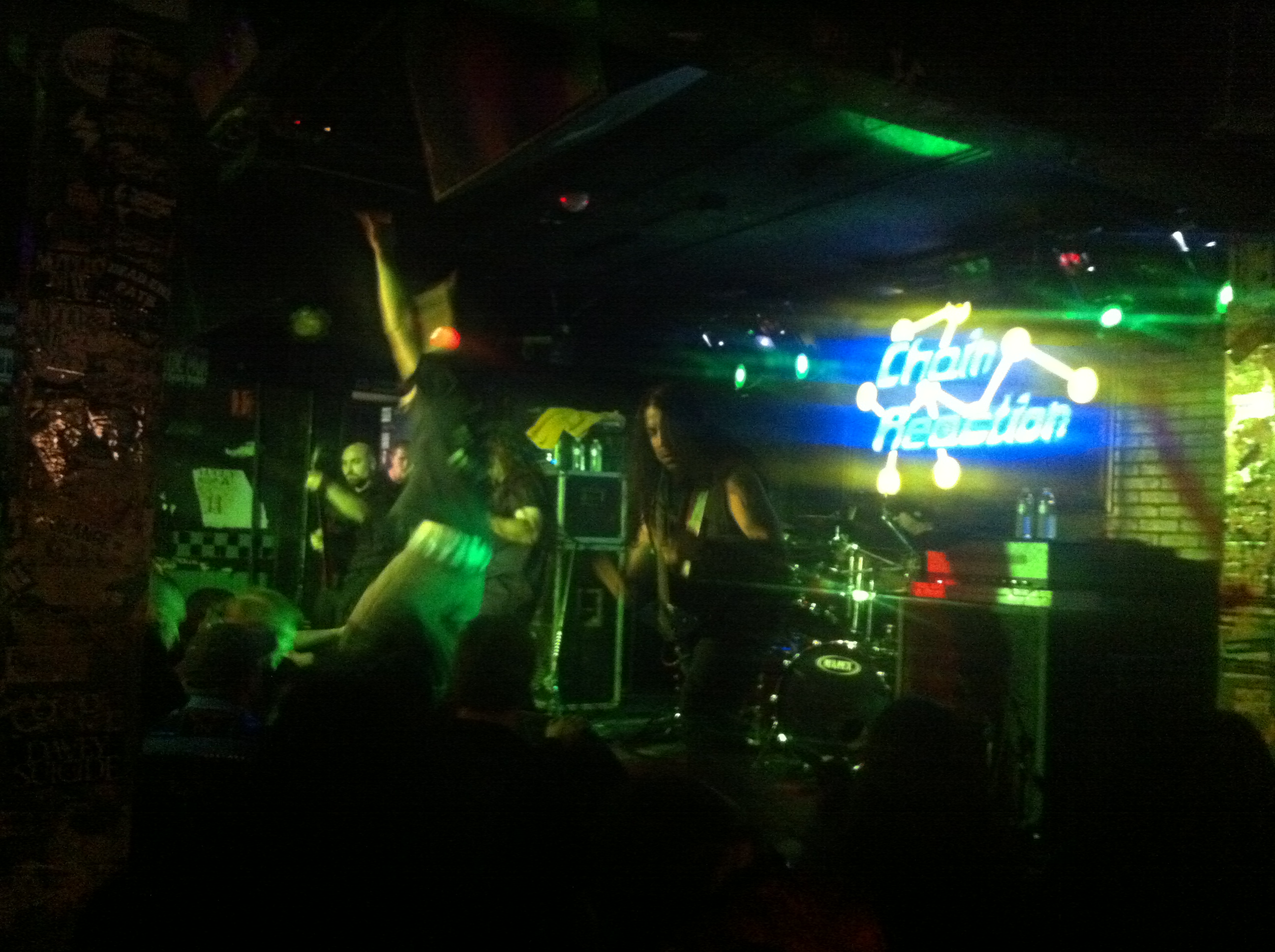 Vocalist Ross Dolan also has impossibly long hair, and I watched it get caught up in the mic stand to the point where he had to yank it loose at least twice, which hurt me to watch. I loved the contrast of when he’d go from growling to talking with his New York accent, giving appreciation to the crowd for decades of support and for choosing this show with everything else that was going on.

I’d say the most interesting thing about this set to me was watching Bob Vigna on guitar. I’ve never seen a death metal guitarist integrate the moves I’ve become so familiar with in the psychedelic rock genre like this. The pressing the guitar around for feedback mixed with these jarring moves in syncopation with the blast beats…it was intense to watch.

I emerged from the Chain Reaction in a strange mental state. The tone of despair was not left in the venue after the fast, dark set as it should have been, but rather it followed me all the way back to LA. It had become extremely foggy that night, which fit so perfectly with my mood. I felt cursed as we tried to have post show drinks back in the city and found all of our usual haunts filled with undesirable characters. I saw things that can’t be unseen, and I lost all desire to procreate, right there in the span of an hour in Hollywood.