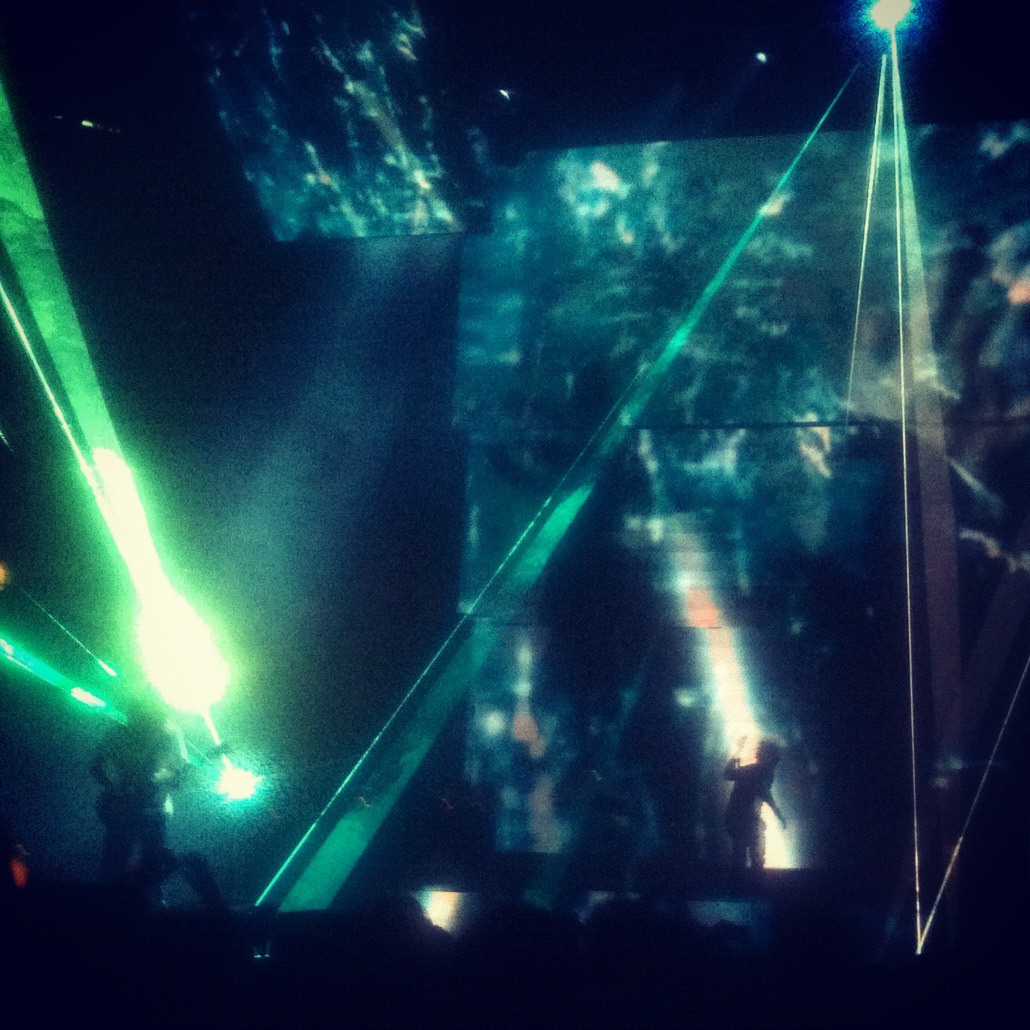 “Over thinking, over analyzing separates the body from the mind.
Withering my intuition, missing opportunities and I must
Feed my will to feel my moment drawing way outside the lines.”

January is always the strangest month of the year. It’s supposed to be all about new beginnings, where we stop doing this and start doing that…but essentially it’s the same thing as the month before and the month to follow…we just pressure cook ourselves into a broth of ideals.

This would be my first ‘real’ show in over two months, and as I write this, I feel cobwebs coming off the fine tuned machine of writing that I had spent 4.75 years gearing up to and feel like I undid in two months of “vacation”. Sometimes I wonder if vacation makes you stupid. Which brings me to the land of stupid vacations- Las Vegas- and this particular Tool show.

Somehow two of us going to Tool turned into five of us going to Tool, which added up to what would come to be known as ‘fake bachelorette party weekend’, though, ironically, instead of spending a night with the Thunder From Down Under, we went to see our generation’s most famous burlesque dancer- Dita Von Teese- and were in bed by 1:30am.

I’ve been to many a show in Vegas, and it’s always illustrated by the influx of the headlining band’s t-shirts roaming every corner of whatever casino is hosting the show. TOOL emblazoned every fourth shirt by my estimation, and 50% of those were paired with a yard long beverage and either legal or illegal smoking substances. And I’m pretty sure 25% of those never made it to the actual show judging by the sway in the walks and lean in the elevators as we maneuvered the vast expanse of Mandalay Bay.

This was an entirely seated arena show, so there was a bit of shuffling involved considering we had a variety of tickets and list spots to spread 5 fake bachelorette bodies amongst. Having somewhat figured it out by showtime, I found myself in the middle of the 10th row with a Big Gulp of cheap red wine in my hand, getting real, real excited. 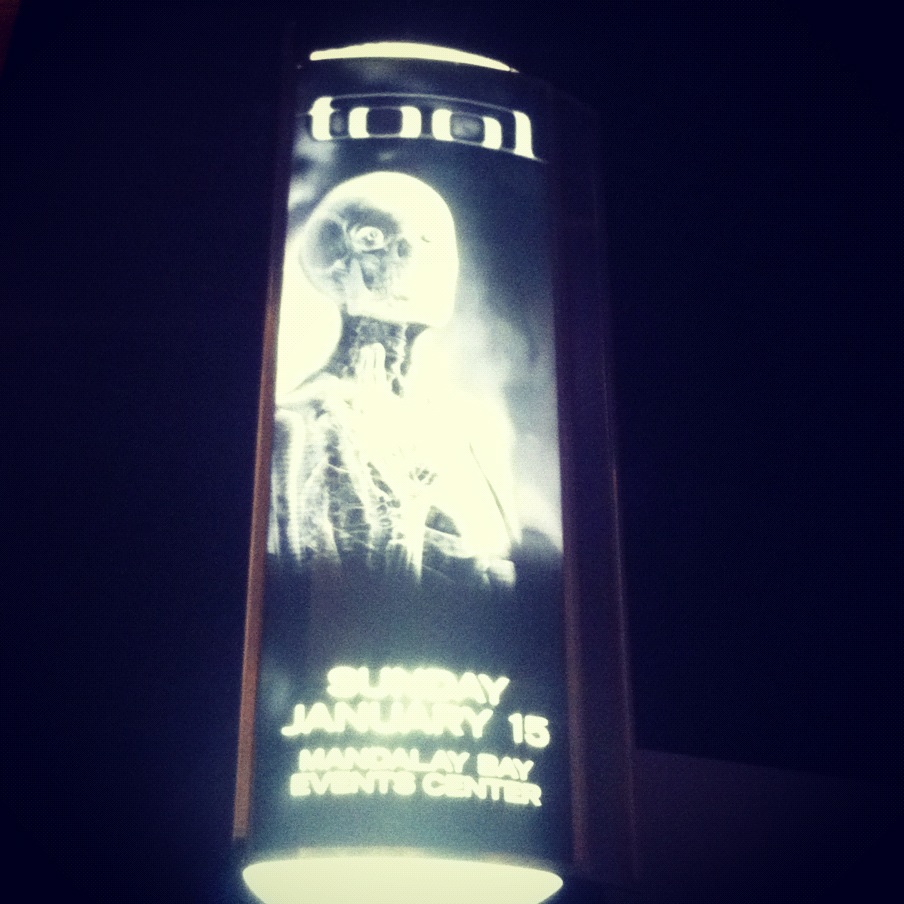 The last two months of concert-less living have put both of my feet on the ground of this thing called ‘the real world’. Standing near the stage at the front of the arena reminded me of this fantasy world I used to live in, and I wondered if I could ever find balance between the two. But I didn’t have much time to think about it as the lights dimmed and the games began.

Intronaut were a very fitting opener for Tool. Their heavy, prog/jazz metal filled the arena as people filled the seats. Life imitated art as the arena became a Valley of Smoke. I’ve seen many opening acts for large arena shows fail miserably; Intronaut captivated the audience as they looked upon the stage at this band that is essentially an extension of the uncategorizable heavy-hitting vibe of the band everyone was there to see. The paired guttural growls and radiated riffs of Sacha Dunable and David Timnick complementing the funky bass lines of Joe Lester and the precision drumming of Danny Walker invaded the audience like a Literal Black Cloud. They left us sufficiently warm and tingly, ready to experience what was next.

Over the years, I’ve found Tool to be one of the more difficult bands to write about. Their live experience is somewhat abstract; it’s neither an intricate stage show nor a bare performance. I describe Tool as avant-garde metal; and as an extension of that, they draw a diverse yet equally fanatic crowd. I remember them being the first band that scared me; their cocktail of angry sounding music, weirdly childish yet dark humor, and esoteric aesthetic left me bamboozled. But there are those of us who are drawn to things we don’t quite understand, and I think this is the premise that established the cult of Tool.

The crowd is enraptured the moment they hit the stage. While vocalist Maynard James Keenan is the enigma that perpetuates the cult of Tool to most, it is the presence of Adam Jones on guitar and Danny Carey on drums that have kept me interested. The guitar work in Tool is nothing short of a masterpiece, and the way that Jones effortlessly plays it makes it eerily unworldly live. The massive in both size and sound machine that is Carey makes him one of the only drummers to rival Neil Peart, and when you see that he’s wearing a Lakers jersey you wonder if this is really the same person who provided the beats for something as dark as “Prison Sex”.

Live, Tool subscribe to the “if it ain’t broke don’t fix it” ideology. Over the past five years, their show has changed minimally as they have set out on little mini jaunts in support of nothing in particular. Luckily the power of their existing music and the trippy qualities of their visual displays allow for the show to become a very internal, individual and thusly self-perpetuated experience that keeps bringing the hardcore fans back over and over again. MJK informed the audience early on that some of the songs hadn’t been played “since most of you were sperm”, but the setlist was still largely dominated by Tool standards. In today’s attention span deprived world, the lengthy Tool tracks feel especially long and intricate. And then there’s when MJK fumbles the words and makes you wonder where the song is going….

It was Adam Jones’ birthday, but the audience got the gift as one half of the Melvins played as guests on “Lateralus”. The two bands have played on bills together a lot over the years. I didn’t think it was possible for it to get any louder, but it did…and my senses were overloaded from the music to the visuals to the smoke in the air and the heat upon my skin.

What is it about Tool that makes them a cult band? What compels thousands to descend upon a city of lights and sin in the middle of the desert for an hour and a half of something that I can barely describe? I don’t have an answer- all I can say is that 2012 feels different, and as I took my last gulp of wine I sure wished it was Sensei.

Author HardRockChick 4
It wasn’t my favorite day. First, I received an email from a certain relative suggesting that I use part of my trust fund to...
Read More