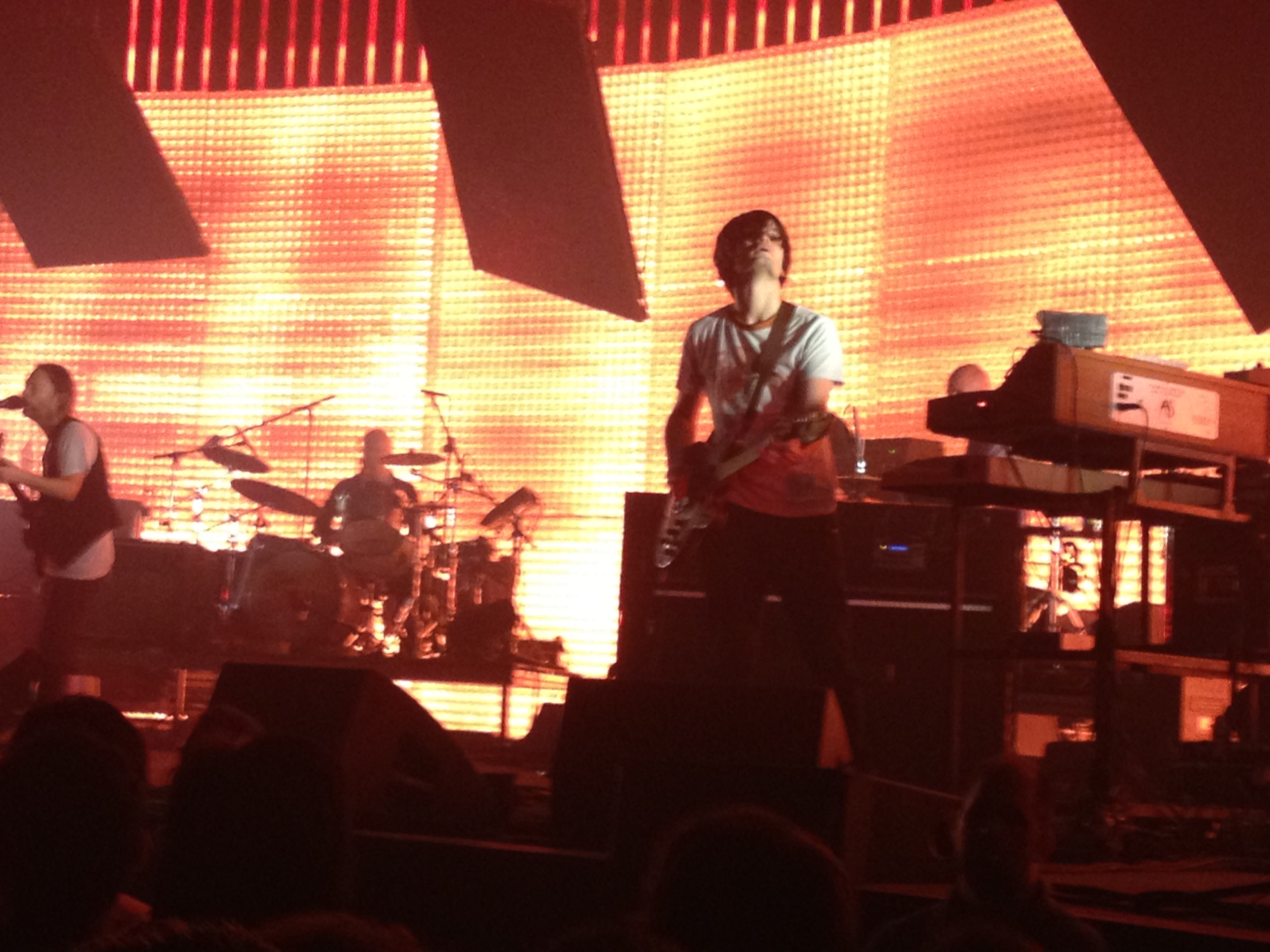 “What the hell am I doing here? I don’t belong here.”

The summer of 1993 is what I often think of as the first branching path in my life; the point where if I’m having a hardcore life evaluation, I go back to as when everything changed. It was the summer when my parents moved me from the big city to the small town. If I had stayed in that big city, chances are my life would be much more traditional today. But instead, my life went ‘off track’ under the guise of the small town mythos. And somehow, on that car ride moving from one place to the other, I sensed it as I stared out the window listening to my Walkman: a mixtape I made from the radio, one that contained Radiohead‘s “Creep”.

That song was roughly cut against Stone Temple Pilot’s “Creep” – which confused my thirteen year old mind as to how both songs could have the same name – and laid against other tracks from Alice in Chains, Nirvana, Soundgarden, Depeche Mode, and NIN. At the time, these bands were all played on the same radio station, and they were all nearly equal in my mind. Little did I know, a version of this mixtape would go on to score the rest of my life.

Oh, to be thirteen again and have everything be a mystery, to have the music you’re attracted to tell you something about your future. Now it seems that all music does for me is represent the past. By their second album, Radiohead would break from this pack and become it’s own entity. Radiohead, in my eyes, became the alternative, darker music palatable to the masses, where I followed an increasingly downward spiral of angry and aggressive music for the alternative crowd. While I never stopped listening to Radiohead, their fanbase always felt like something I couldn’t belong to. Plus, I’ve always been a little scared of how their music makes me feel.

If I’m really depressed, there are exactly six albums I tend to listen to: Nirvana’s “Bleach”, Joy Division’s “Unknown Pleasures”, Iggy Pop’s “The Idiot”, Nine Inch Nails’ “Still”, Radiohead’s “Amnesiac” or “Kid A”. To me, Radiohead has made some of the saddest songs in the world. Specifically, “Pyramid Song”, “Everything In Its Right Place”, and “How to Disappear Completely”; these songs have accompanied me to darker places than most metal bands ever have. I remember the day I found out my mother had a three month death sentence from pancreatic cancer, watching over her that night in the hospital, I only listened to those three songs.

Perhaps it is this deep rooted sadness that I associate with Radiohead that kept me from seeing them all these years. Perhaps it was the feeling of not being a typical ‘Radiohead fan’. It seemed like every time I found out they were coming, it was too late. And the one time I did have a ticket, I got sick.

And this time wasn’t unlike the others. But somehow, there was a blip in the matrix, and by someone’s generosity, I found myself walking onto the floor of the Frank Erwin Center for the first time since I walked across it’s stage to graduate college. I watched every instrument being placed onto the stage with utmost curiosity. There was precision in the setup, a necessity for the amount of instruments, keyboards, and other unfamiliar things that began to decorate the stage. You could tell by this alone that what would soon unfold would be special.

When they took the stage, after getting over the initial shock that this was finally happening and that I was so close, I immediately picked up on the vibe of the band and the show being a total mismatch from all my expectations. I expected it to be somber, self-indulgent in a way, and for the fans to be annoying as many mainstream, bigger shows I go to tend to be. I was wrong on all accounts.

The set began with King of Limbs tracks “Bloom” and “Little by Little”, and their uptempo beat had Thom Yorke dancing around…something that he would do all night long. I didn’t expect him to be such an engaging frontman- I guess I’ve stayed away from watching a lot of live videos since they’ve always been one of those sacred bucket list live acts to me. It just seemed so funny, which only increased when he would say things like “cool beans” between songs. It reminded me of a parent who does a little jig to make their crying baby smile; and all those worries that I was going to have to choke back tears during this set evaporated.

Watching Jonny Greenwood work was nothing short of mesmerizing. He juggles so many instruments it was often hard to keep track of him on stage; but he did it so seamlessly it appeared effortless. He wore a vintage Texas Longhorns shirt, like he needed this crowd to respect him any more.

When York sat down at the piano to play “The Daily Mail” the arena was so silent it nearly hurt my ears. To hear someone sing and play the piano for a completely silent arena crowd gave me chills, it felt like such a raw music moment- nothing could disguise an imperfection here.

The stage setup consisted of multiple hanging square screens that featured a live feed of the band playing, like a fragmented, much cooler version of a Jumbotron. They would move for different songs, giving the audience the ability to see all angles of the performers regardless of their position.

As the set geared up to “Myxomatosis”, it seemed like everyone around me collectively lit up, including what appeared to me to be a mother and her very underage son. Onto “The Gloaming”, this crowd-generated fog machine complemented York’s ongoing dance party.

“Kid A” into “The National Anthem” grounded me; it reminded me of my first few times seeing NIN and hearing the differences in the live version. To see how such complex songs play out before me, where the song has to give a little to come to life before your eyes. 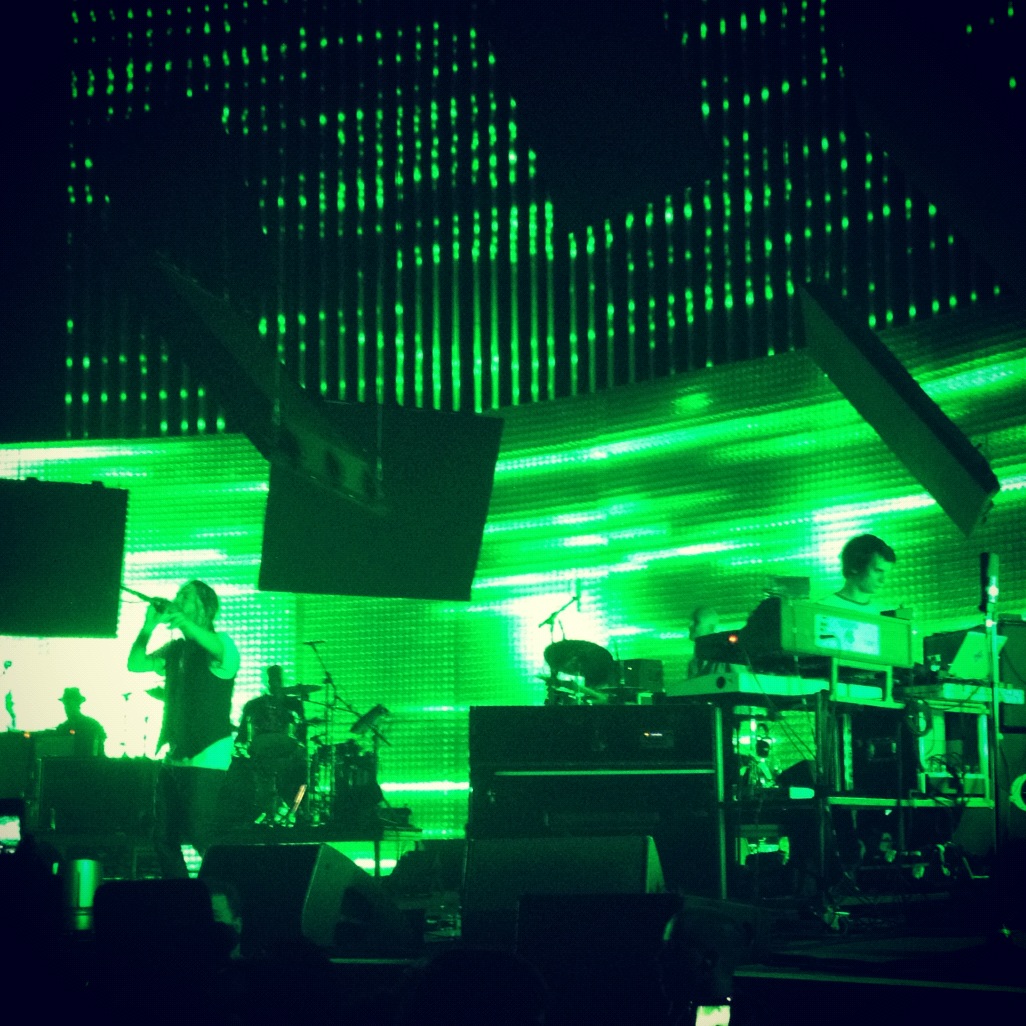 York talked about how they tried to go to Barton Springs earlier that day, but it was closed, and how he admired the slogan “Keep Austin Weird”. It was so odd to me to hear this, to see them engage the crowd- I realized that I had put Radiohead up on a very high pedestal, and that as the show went on, they became more and more humanized. The last time this happened was across town at The Backyard seeing David Bowie talk about watching the bats come out of South Congress bridge. Ziggy Stardust cares about bats?! WHAT?!

Quickly back out for the encore, I became lost in the long instrumental beginning of “These Are My Twisted Words”. But it was when “Everything in its Right Place” began that defined the show for me. Somehow the very creator of the song took a decade’s worth of sad memories attached to it and turned it on its head. The way they played it that night was…hopeful. It was something that I tried to listen to on many levels.

They finished with “You and Whose Army?” and “Paranoid Android”, both of which felt surreal to finally hear live.

I left the show buzzing about finally seeing Radiohead, and how different- in a good way- the experience was. Music has always been a conduit to accessing my feelings, and it’s that reflective time of year. Tomorrow I turn another year older, and I feel like I’m running out of time. When will I come to that other fork in the road?