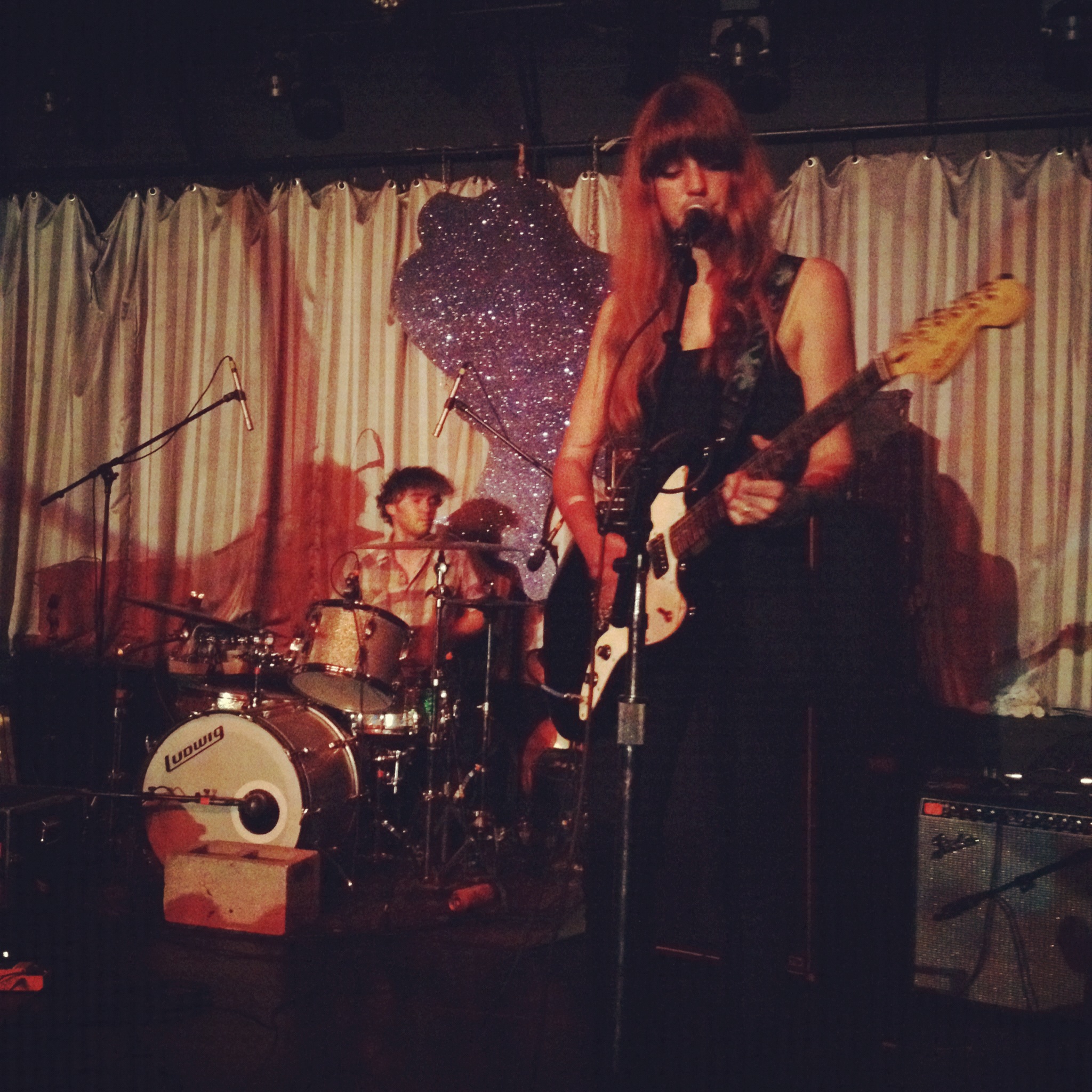 Last year’s Austin Psych Fest was, as one would expect, a trippy adventure amidst the weird energy of the now defunct Seaholm Power Plant. To kick off this year’s fest, on Monday night we found ourselves at the Alamo Drafthouse to watch a screening of the DVD made from last year’s fest. The back of my head is famous on YouTube and this DVD; it was odd to watch the Black Angels watch ourselves watching the Black Angels on the screen…my head hurts. 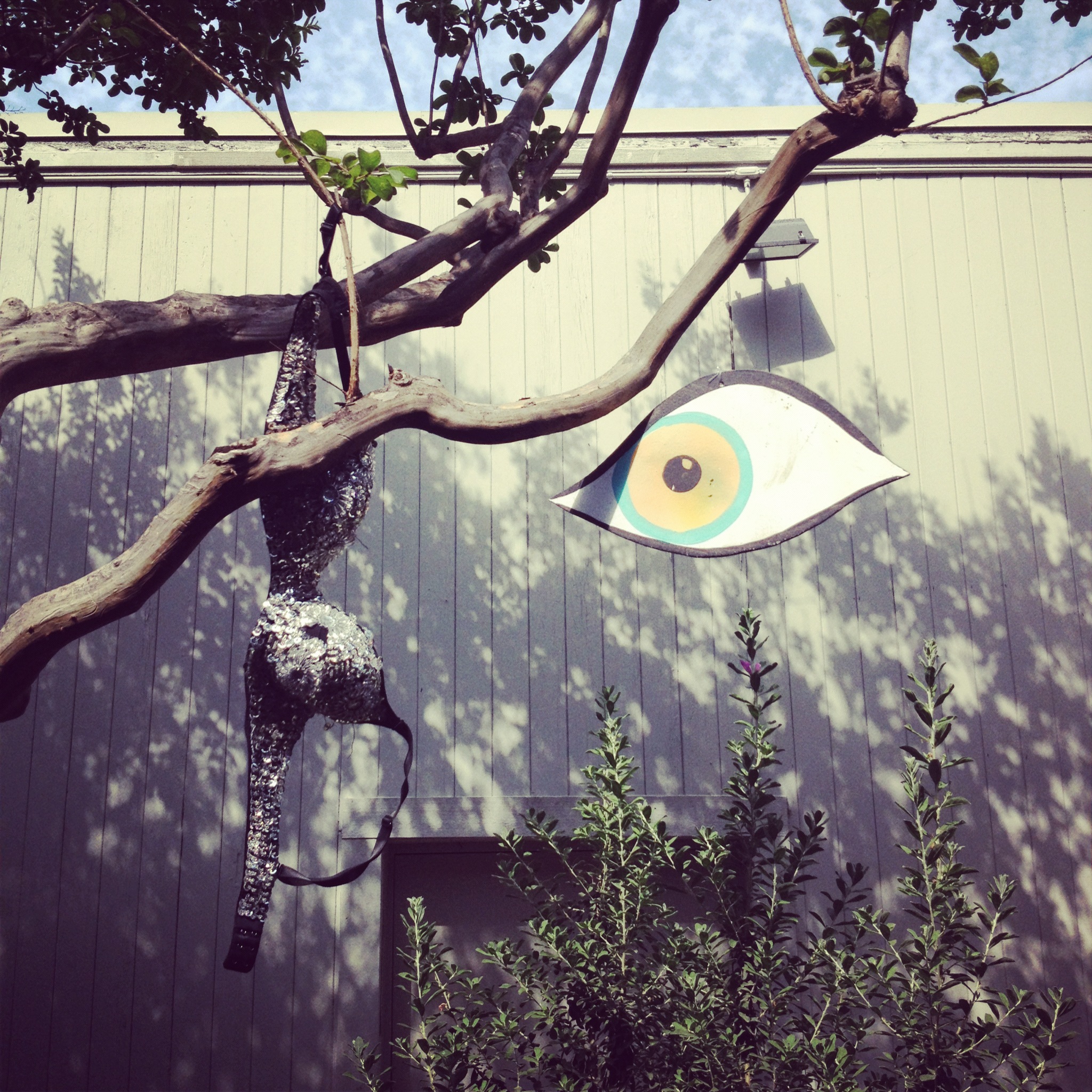 This year’s Psych Fest would be at the relatively new Emo’s / Beauty Ballroom compound; I’ll have to admit that I knew that would change the vibe of the whole thing. A psych fest is all about the vibe, right? Upon arrival, I was happy to see that the corridor between the two venues had been transformed into a trippy village. Eyes hung from the trees, shrines adorned with odd figurines (a Buddhist chicken?), a hut with bean bag chairs….it was…everything my last round of shows had not been. People think it’s weird I cover both metal and psych rock extensively in this space…I think it’s weird if you only like one type of music. Tip: if you like both genres like me, check out Nachtmystium.

Night Beats were the first band of the fest for me, on the big stage at Emo’s. What immediately hits me is how different all of these bands are going to sound and feel; psych music is so varied. It can sound like it’s from the future or deeply rooted in the past…but never really like it’s from right now. Trippy, right? Night Beats have that distinct throwback sound….low fi garage-y that makes you swing your hips like a bobby socks wearing bad girl. A trip down the corridor to the Beauty Ballroom, we entered it’s cavernous space for Ringo Deathstarr. Shared male and female vocal duties and fast paced distortion projected us forward from the foundation that Night Beats had laid for us. Like an action sequence in an electro-hypnotic dream, I started to settle in to the headspace that this type of music transports me to. Dead Meadow is one of the bands I looked most forward to seeing. Skewing more hard rock, their riff-focused music echoes Sabbath DNA seen through rose-tinted glasses. The guitar work was superb, and this stripped down sound had us swaying, taking us right into the night. Post set, I was craving hopping in the car and cruising to Top Notch. Watch the leather, man! While The Black Angels closed out the fest last year, they were the finale to night one this time around. Somewhere along the way, The Black Angels have become more than just a band. They’re like the glue holding this genre together, or a curator of sorts. They put together this festival to celebrate the genre and people have come from all over the world for it. Sure, it’s not a huge festival, but it’s very specific and thus satisfying in a different way. And the band itself has grown; they now have a permanent sitar player! What band sports that nowadays? Let’s close our eyes and pretend we’re at Monterey Pop. Trippy, right?

I’ll admit this wasn’t my favorite set from them…sound issues were abundant, but their songs are strong enough to prevail. The Black Angels definitely take us backwards in the space/time continuum; when things were both simpler and profoundly fucked up. As we all got lost in the vortex of the echoes of the guitar, the pounding of the drums, the reverb in the vocals; I’m sure some of us experienced that nagging feeling that we were born in the wrong decade.

By 3pm the next day, we were at it again. We caught the tail end of The Stepkids, a band who I’ve loved since I saw them open for The Horrors last year. Their ’70s style psychedelic porn music feels unique, and even though it was mid afternoon, it put me in the mood. I joked that they should be the last band to play…free love, right? The Band in Heaven were up next. I really dig their sound, and “Sleazy Dreams” has become a favorite cruising song of mine. I wish their stage presence fit a bit more with the intensity of their music. Regardless, for sound alone this was one of my favorite sets of the festival.

For the next couple hours, we participated in some psych fest extracurricular activities, both expected an unexpected:

Unexpected: I found the most metal leather top of all time! 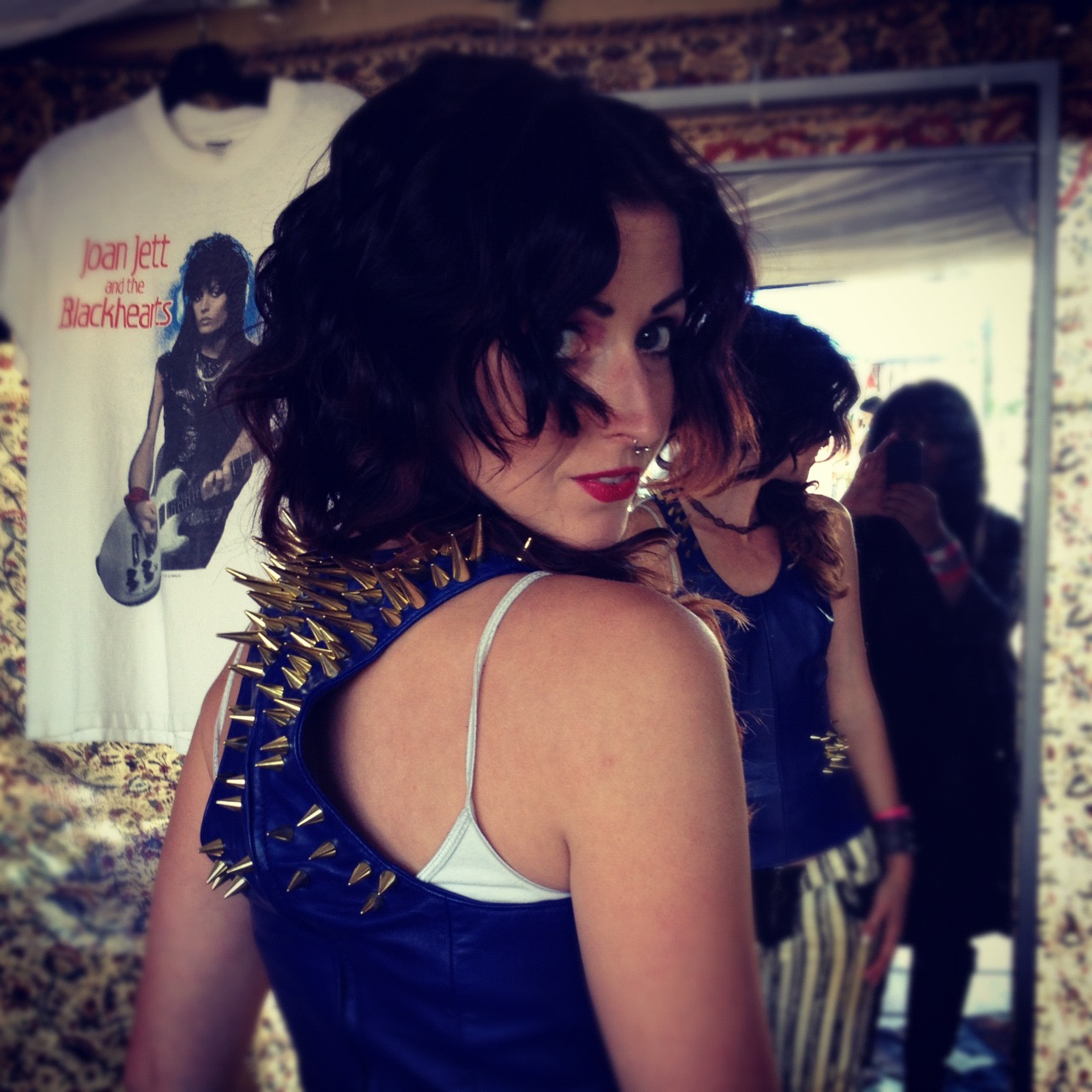 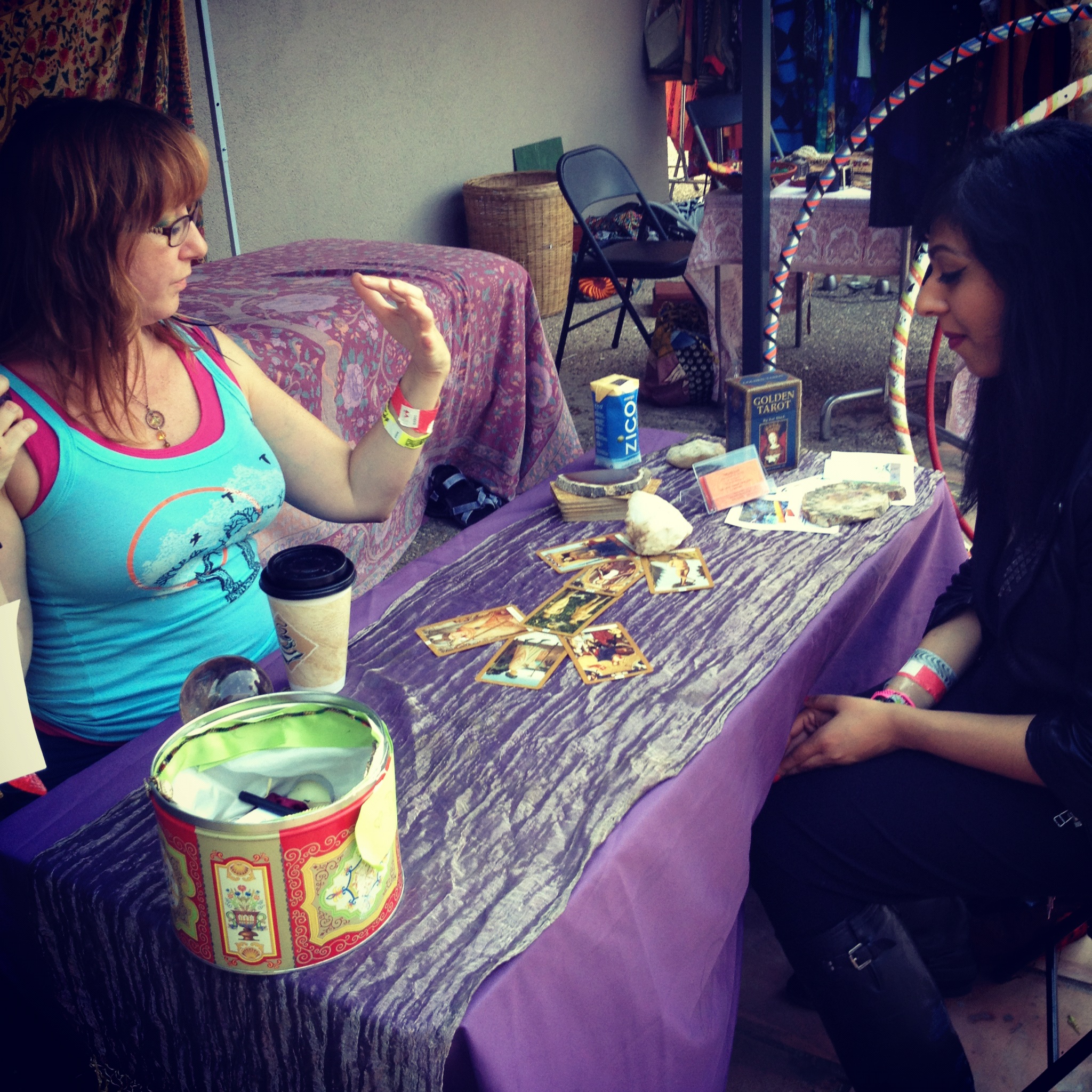 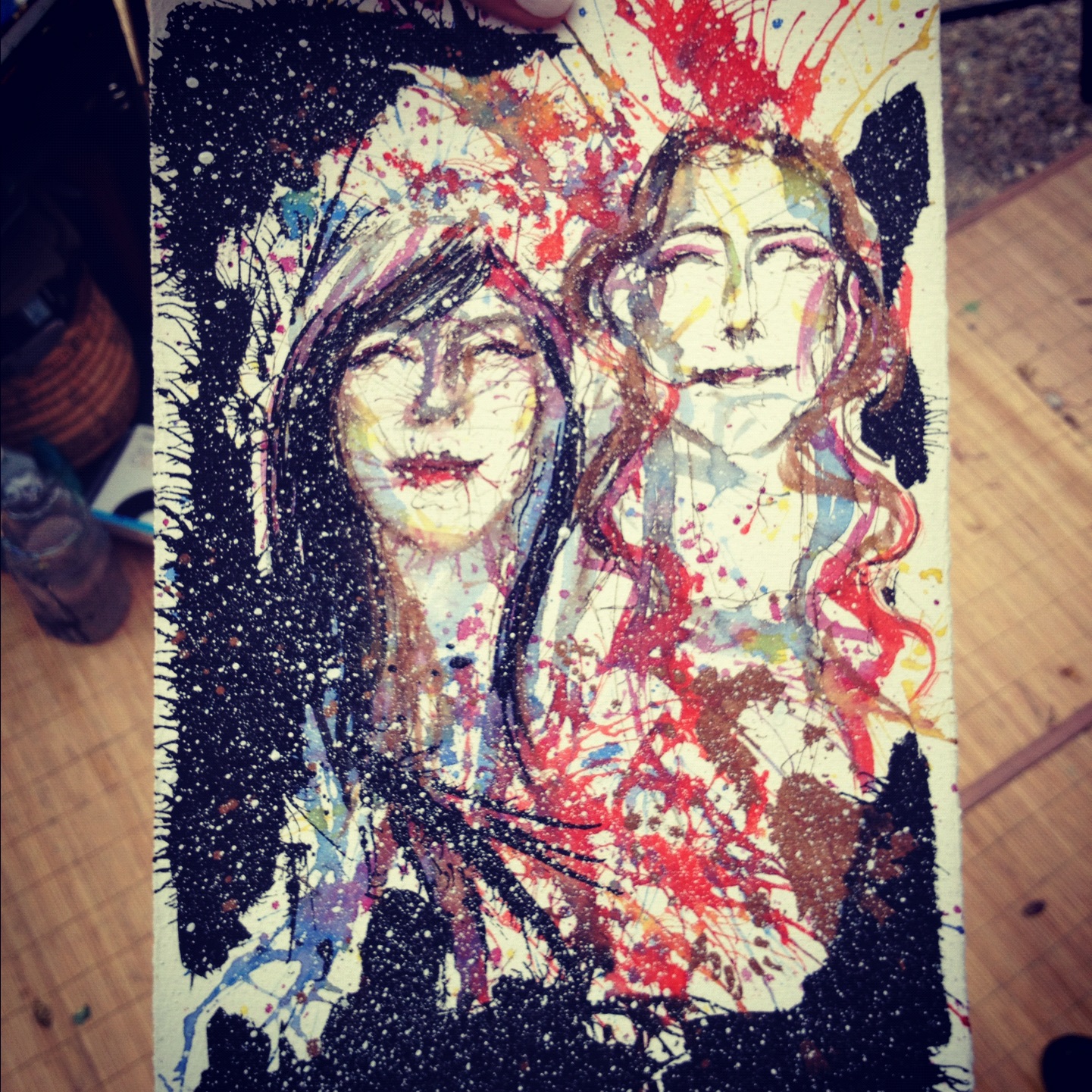 My tarot reading said, as the other two I’ve had in the past year, that I need to stop looking for love in all the wrong places and keep focusing on my work because something amazing is going to happen. You mean, maybe someone will pay me to do what I do now?! Trippy.

I’ve been listening to Spindrift for a while now; I love their psychedelic spaghetti western music. It is so…specific; it evokes a whole set of notions that generally don’t apply to music for me, and that’s the environment I grew up in. As I got lost in the thought of guns, spurs, riding horses, wearing fringe, and cactus in the desert; the funniest thing happened. The bass drum somehow came unglued and rolled to the front of the stage. LIKE A TUMBLEWEED! Trippy, right?

Check out an interview I did with Spindrift here.

My surprise of Psych Fest was the opportunity to see The Entrance Band, featuring Paz Lenchantin on bass. For those who need a reminder, Paz was once “the girl” in A Perfect Circle. With a fake flower woven through the frets, Paz played bass like no one I’ve ever seen before. It was almost like watching someone play the harp; the way she delicately picks away and sways along was simply mesmerizing. The last time I saw her was at an APC show where she apparently was the person who climbed out of the VIP box. Anyway, the music was hypnotic, but not as stand out as I would have liked, but her performance made it worth the watch. I knew absolutely nothing about The Olivia Tremor Control. However, before their set I was schooled on how fanatical people are about this band. My friend kept saying how she had no idea how this set was going to go down; and listening to it after the fact makes me understand why. Before they began, I was reminded of the time I saw Throbbing Gristle. The music is oddly layered, near psychosis inducing with all the little quirks of it. They were like the Arcade Fire of psych music…so many people on stage playing different instruments. But the intricacies just didn’t come across like they should have. Plus, the Black Lips crowd was in full force, and they were not having any of this slow stuff. The Black Lips. What a strange band. I saw them a while back at Emo’s and was shocked at how crazy the show got. Their sound is The Ramones meets American Apparel, it’s fun but kind of light. The stage was crowded with VIPs who contributed to a back and forth of throwing rolls of toilet paper across the stage and into the crowd. It turned into mass chaos as everyone let go for the evening. It turned out to be a dangerous dance party for some, after the show was over, the floor was littered with broken glass and blood. Freak out!

Sadly, I could not return to Psych Fest for day 3, where one of my all time favorites, Brian Jonestown Massacre, would headline and play what I am told was an extensive, two hour set full of Anton’s ego.

Until next year, it’s been far out! 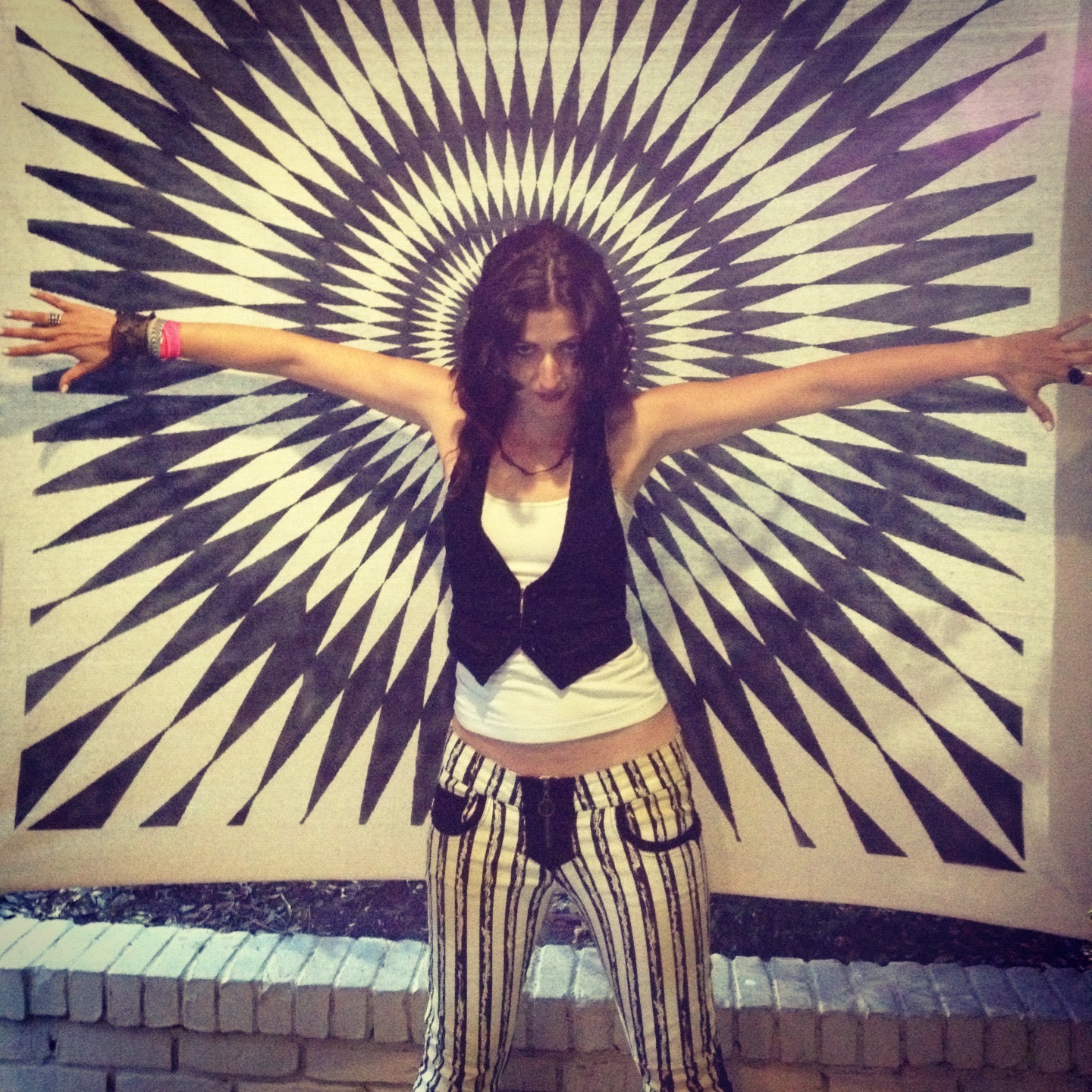 Author HardRockChick 0
I caught myself peeking out the window to see if it was dark yet. I spent all weekend in a self-imposed solitary confinement- on...
Read More
My Musical Adventures