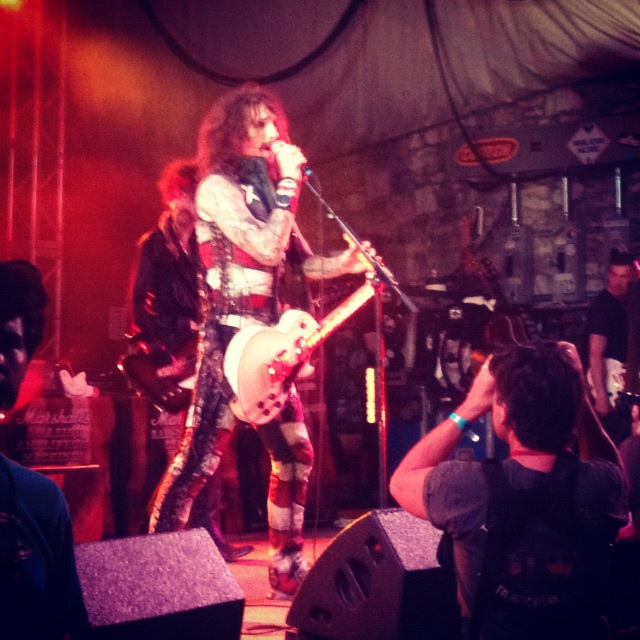 “Hey you!
Do you remember me?
I used to sit next to you at school
We indulged in all the extra-curricular activities
We weren’t particularly cool”

Way back in 2004 The Darkness were coming to Stubb’s and I was finishing up grad school. Most people thought they were a joke band, I thought they were marvelous. I could not get anyone to go with me, and back in those days that meant I just would not go.

Over the next 7 years, The Darkness would occasionally come up in conversation, in lowered voices, generally with my extreme music geek male friends. “Hey, do you like The Darkness? OMG, me too!” Due to certain band turmoil, I had completely given up on ever seeing them.

Fast forward to 2012, and I find out The Darkness are coming to Stubb’s again. This time, there was nothing getting in my way. Ticket purchased, and I even had a date for the show- another gal who had missed out on them the first time around.

I have a theory that the bands I missed seeing for whatever reason make up for it when I do finally get to see them. This show would be a prime example.

It was in the low 90s and sticky humid as we found a spot at the corner of the rail. We would be right in front of the speaker but we didn’t care. (“HUH?!”)

San Antonio’s Girl in a Coma opened the show. I liked that The Darkness chose local openers for each show; this was a band I had been wanting to see for a while. Darker, rocking love songs from this trio of ladies entranced the crowd. Vocalist Nina Diaz’s stage presence is nothing short of tantalizing, as she entertains the crowd with honest introductions to their seemingly autobiographical songs.

As the time approached for The Darkness to come on stage, I took a moment to reflect. It’s been a long, bumpy road to self discovery from the time I should have seen The Darkness in 2004. But the one thing that has never changed is the music, and my love for it (and exquisite, eclectic taste, if I do say so myself). And Stubb’s has been the place where I’ve caught many of these bands I’ve loved forever but had to wait many years to see: Nine Inch Nails, Hole, and now The Darkness.

“Black Shuck”: the crowd gets rowdy as excitement boils over. The first things you absorb about The Darkness reminded me of the first time I heard them:

1) That voice!! It’s as great live as I could have ever hoped for. I feel like I’m seeing Freddy Mercury.
2) The humor! It’s not only in the songs, but physically in the performance.
3) The hooks! It’s straightforward hard rock that’s such a dying breed.
4) The songs! The Darkness take experiences and emotions we’ve all had and craft catchy songs from them.

“Growing On Me”: it was only the second song in and I had a plastic smile on my face. A delicate balance of a technically astute performance, good time rock ‘n’ roll, and a sense of humor quickly made the world completely disappear. And I was left there smiling, thinking about how at 32 years old I can still experience something new that totally blows my mind.

“One Way Ticket”: some people just can’t contain their excitement and Stubb’s security has to take them out. I mean, it’s the beginning of a three day weekend that marks the beginning of summer and here we are singing along while a rock star does jump kicks and hand stands off a drum riser. 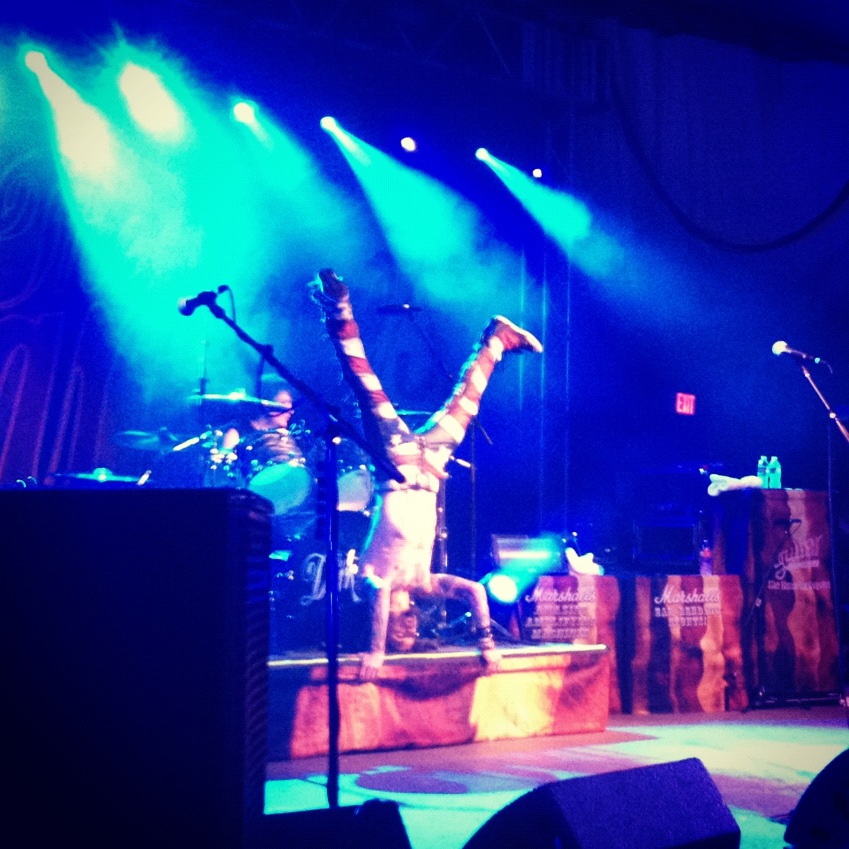 “Get Your Hands Off My Woman”: This is where the show got serious. Despite seeing two of my favorite live bands the previous two days…I was standing here completely falling. I was being served up a prime example of why I do what I do- I would now spread the word of The Darkness. This song is so fun to sing…of course, I change the word to “man” and just mouth the words because no one wants to hear me attempt those pitches.

“Holding My Own”: An acoustic guitar and a top hat has Justin performing a stripped down version of this show. It’s not very often in rock and metal that I fully have my breath taken away by both the talent and the song. I will admit that pop and R&B often bring chills to me even though those aren’t “my” genres (hello, “Rollin’ In the Deep”)…so it’s rare that this combo exists within rock. I can’t really explain how I felt after this song any further. 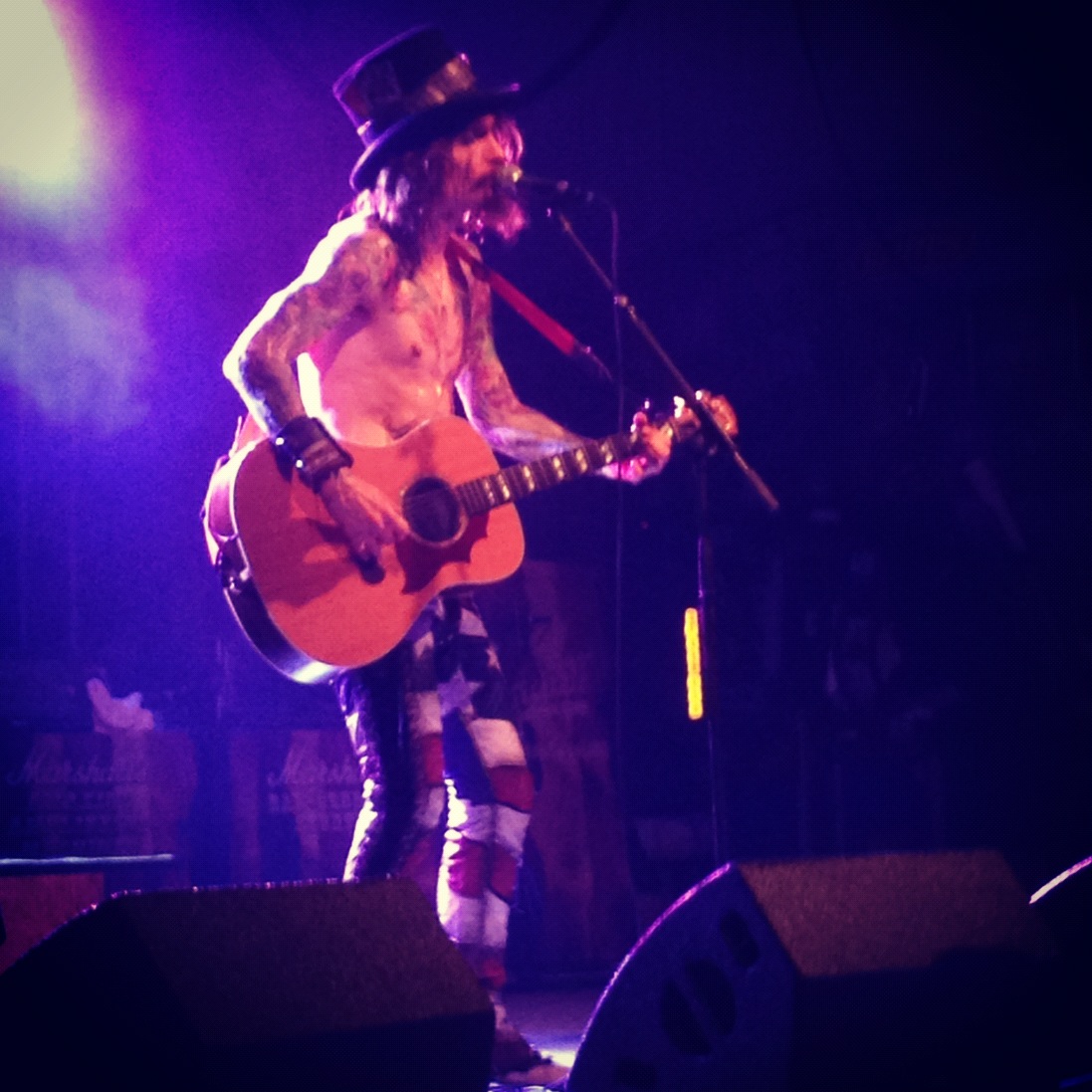 “Friday Night”: One thing I really like about The Darkness is that you can hear the British accent through the music. I love this song because it reminds me of simpler times; there was something so fun about quick and innocent crushes….wait, I still have those!

Another thing to love about The Darkness: costume changes! Somewhere around this point, Justin ran off stage and emerged in a stripey denim jumpsuit with a scoop neck reminiscent of an SNL digital short.

“Givin’ Up”: Sometimes The Darkness becomes the Justin show…but that’s of no discredit to the band. You can tell each one of them is a character and brings something of their own to the alchemy of the performance beyond their particular musical talent. Which is great, because it covered up my singing along for this one. 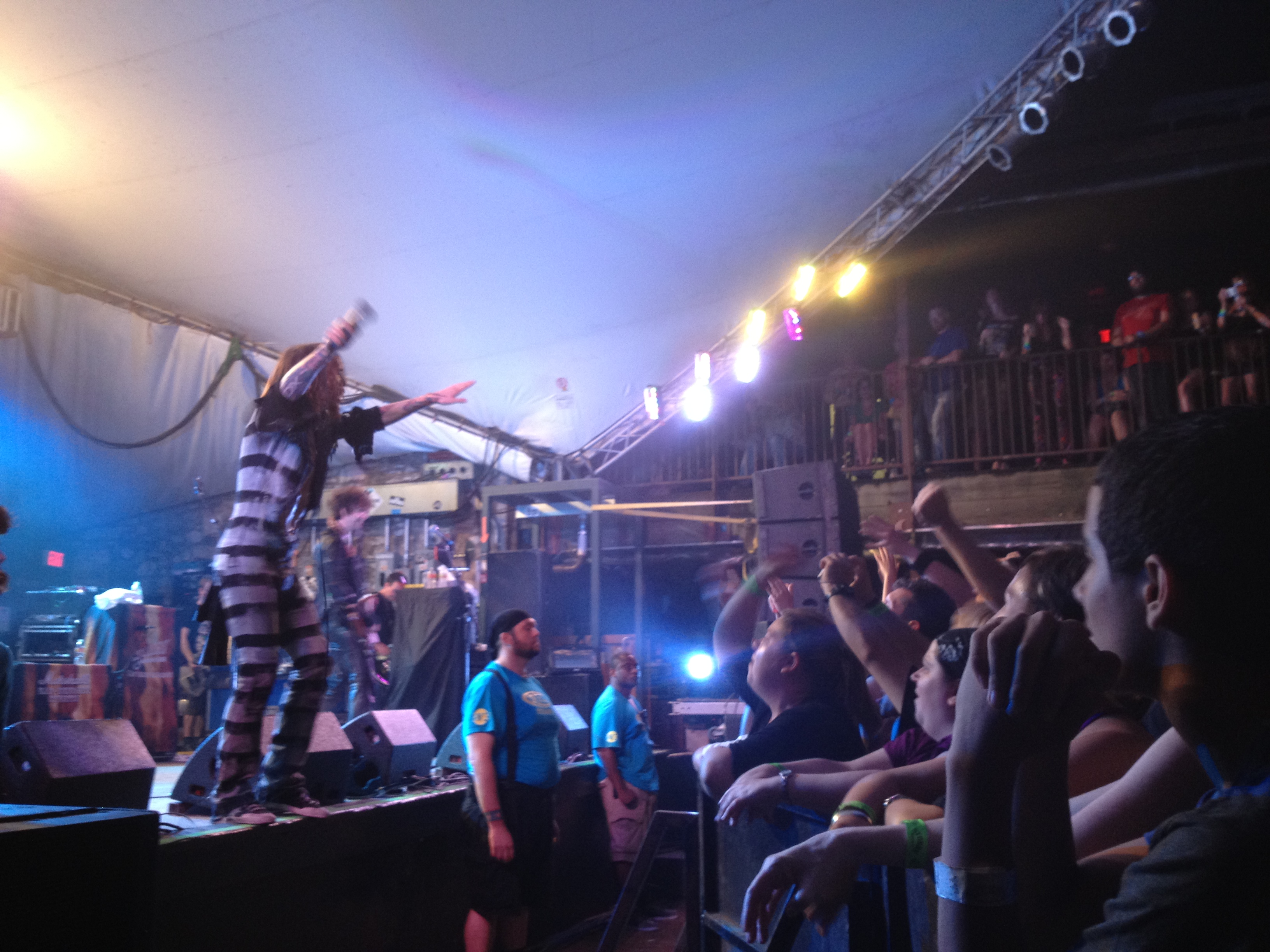 “I Believe in a Thing Called Love”: I love that they make a big deal out of this song, because it is very obviously their most famous one by far. I replace “love” with “lust” here…because it’s been so long I don’t believe in love anymore (ok, maybe I do…but don’t tell anyone, ok?).

Another costume change and it’s encore time. We’re all drenched in sweat and the obligatory dust layer that Stubb’s lovingly bestows upon us. But we all want one more jump, one more falsetto.

“Hazel Eyes”: a quintessential Darkness song that showcases their talent and the unique vibe of the band. 18 songs into the set and my jaw was still dropping.

“Love On the Rocks”: The final song and my favorite song:

I lived this song. And I walked away and my life is so much better for it. I thought about that, in that moment…and you know what the strange thing is? Facebook told me that he got married the very next day. Weird timing! Weird weird.

Justin rides on a security guy’s shoulders while singing and playing amongst the crowd. He gets back up on stage and calls out the drummer for playing the same beat for 20 minutes…demonstrating “his prowess as a lover”. Then he seems swept up by the moment – let’s blame the heat – and he tells the crowd to catch him when he jumps off the balcony.

Next thing I know, he’s scaling the stack up to the VIP balcony, and I did what anyone would do, I filmed it in disbelief:

Yikes! But he emerged unscathed and with impossibly furthered rock star cred. They finished the song, promised to return, and left the stage. 2 hours later I had hatched a plan to see them again in Dallas.

Author HardRockChick 0
For some reason, Stone Temple Pilots never make it on the list of ‘my bands’. Why is that? I pretty much know every word...
Read More
My Musical Adventures