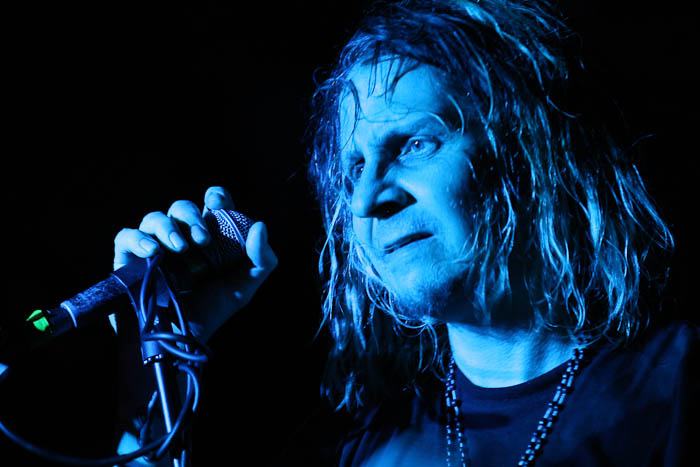 Consider this the beginning of a new, exciting chapter of HardRockChick, where instead of popping up all over the place with a review here and there of this or that like a submarine lost in the ocean….where instead of soul crushing, bleeding heart stories of death, misery, and self-destruction (ok…I actually don’t promise that will totally go away)…instead, things will go back to the beginning of HardRockChick, where I immerse myself into what a city has to offer. A period of discovery is about to occur; but instead of the bright-eyed, bushy-tailed 27 year old in San Francisco who was rediscovering her love for rock and metal after leaving it for many years, I will approach this as a much more experienced and slightly jaded pseudo-metalhead.

I’ve been in LA for two weeks, and while not working on my new-found enthusiasm for my jobs that actually make money, or laughing at Los Angelenos who are complaining about the heat (PUSSIES!), I caught a rad mini set by my much beloved Gypsyhawk at the supercool Vacation Vinyl in celebration of their recently released record. I also Summer Slaughtered again in the air conditioned Grove, where I began the show trying to find my way through the dark during the Short Fuse set and was ragdoll thrown by a spontaneous pit. I saw Cerebral Bore for the first time and was completely impressed by their female growler, and during Cannibal Corpse, while perched on the first tier, we experienced what came to be know as “Hair Smashed Face” by a long hair below us going crazy. Then I went to Los Globos for the first time to see Black Cobra and Saviours, which was a venue new to me, appropriately described to me as a Scarface-esque coke den. That couldn’t have been more accurate. The synchronized shirt removal that begins a Saviours set is worth the price of admission alone.

But for whatever reason, for the first time in nearly 6 (!) years…I’m not writing full pieces on those shows. Call it being burnt out, laziness, or whatever…

So the chapter begins, appropriately, with eyehategod.

I’ve been seeing EHG play for 16 (!) years now. To recap what I’ve written in many EHG pieces on this site, they were technically the first metal band I ever saw, opening for White Zombie and Pantera in 1996. You never forget your first, blah blah, etc etc…nothing will beat this EHG show for me….but I’m still stoked I got to review them on the GRAMMY site.

While waiting in line to get into this show, I caught the best juxtaposition of merch ever: 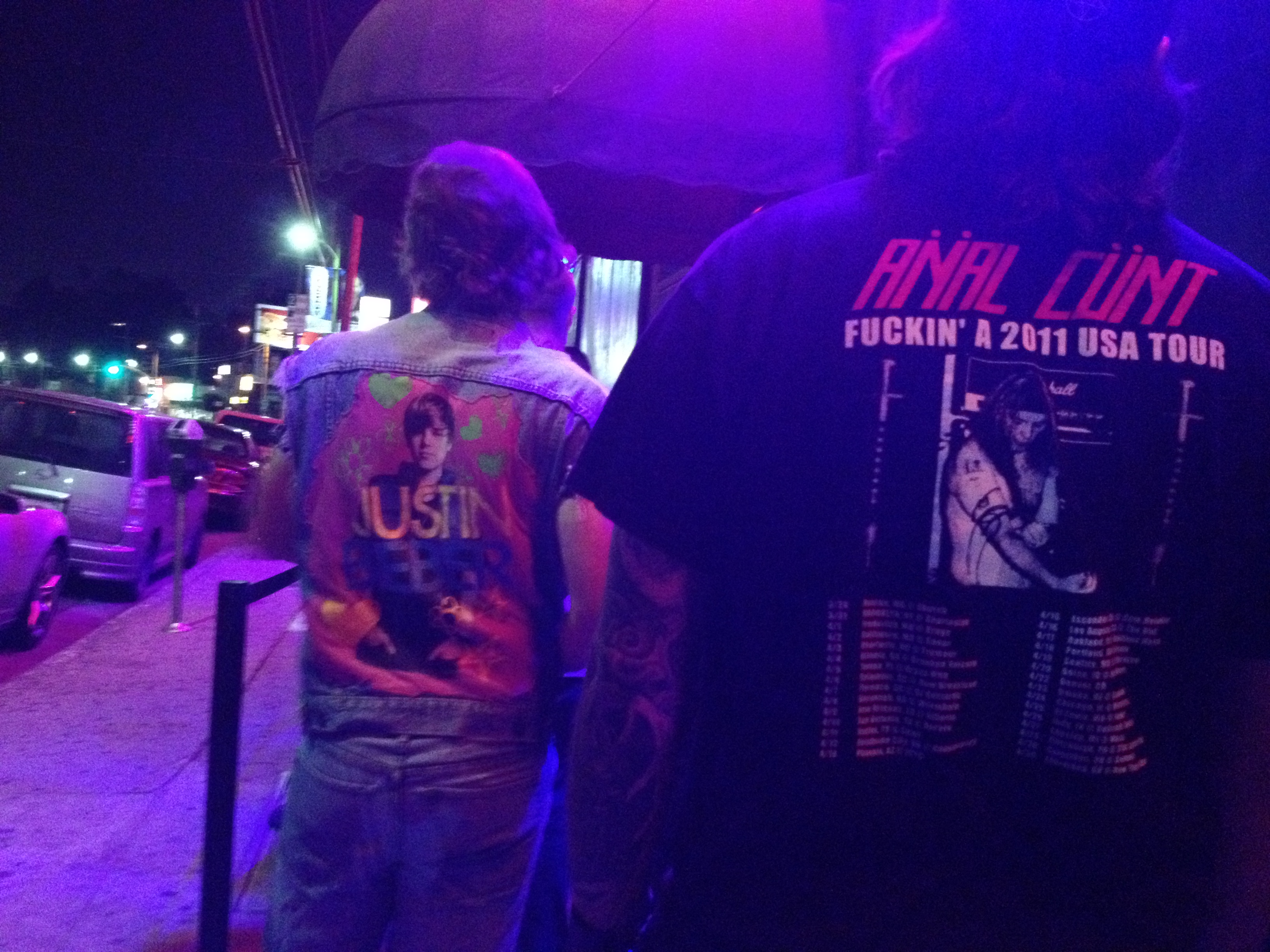 Then, after having fun list drama, we walked upstairs into the low ceilinged, dimly-lit, red leather padded walls space that is Los Globos. It’s the kind of joint that makes shady people look one shade shadier. Standing on the perimeter of the crowd watching Nausea perform, I took in their primitive growls and Terrorizer covers while a guy looked at me and slurringly said, “are you ready….to go up there…?” to which I replied with not words but a very distinct look that is worth a thousand words. He stared back and then relocated. HRC = 1, dude = 0.

Los Globos is kinda weak on sight lines, so I’m not sure I ever really saw Lack of Interest, but I sure saw the pit and security hand picking people to drag out of it. It was an intense set of what is apparently deemed “powerviolence” and has a long LA legacy.

Somewhere between my history of seeing EHG, the intoxicating effect of that room and the people in it, and the fact that my show partner in crime has about 10 years on me, I found myself standing nearly front and center. I don’t know what I was thinking. I wasn’t. But as soon as the first notes of screeching feedback painfully pierced my ears, I began what would be about an hour or so brawl sandwiched between stage and crowd. I think at one point I was underneath Jimmy Bowers’ guitar lying on the stage…my psyche was definitely in the uncomfortable yet somehow comfortable to me space of “this is so fun!” meets “get the fuck out what the hell are you doing?!”. But if you know me, you know that the thing people most often call me is “stubborn” and I lasted about halfway before I stepped a couple people back because 1) someone twisted my boob 2) I got hit underneath the jaw, and 3) I swear someone in there was wearing cleats! That hurt the most. Anyway, watching the inebriated wails of Mike Williams, the sludge drip off of Jimmy Bower’s guitar, and the pummeling of Joe LaCaze’s drums I am imbued with the spirit of rebellion. Get high, get drunk, get laid, kill your boss, fuck the police, fuck religion, fuck everything! While everyone else is at home in their beds falling asleep to late night television after a holiday weekend of picnics and BBQs and family time, letting the consumerism of the ads seep into their heads like osmosis as the glare of the TV bathes them in light like zombies….we are here. We are causing a ruckus, breaking shit, breaking ourselves, yelling, drinking….living!

While that all may sound auspiciously provocative, I will say that I was somewhat horrified by the guy who ran out on stage, took out his junk, and started fiddling with it on stage in our direction. I mean…I didn’t need to see that.

Amidst old favorites like “White Nigger”, “Dixie Whiskey”, “Sisterfucker”, and “Blank”, we heard a new song that sounded great. Even with the bruises quickly developing all over, I grooved between the fuzz, as the heaviness of the people + the music felt pressurized in this short room, and we were all boiling over. The arms of the clock were licking 2am before we left that place, free-spirited evil beings hell bent on rebelling over Labor Day.
Tags: eyehategod,lack of interest,los globos,nausea
Preview post

Author HardRockChick 1
About a month and a half ago, my bands did the ol’ switcheroo. Twiggy, no longer in NIN, went back to Manson. Weiland went...
Read More
My Musical Adventures

Author HardRockChick 5
On September 18th at 4:30pm, I was reading Kurt Cobain’s Journals in bed next to my mother as she took her last breath. She’d...
Read More