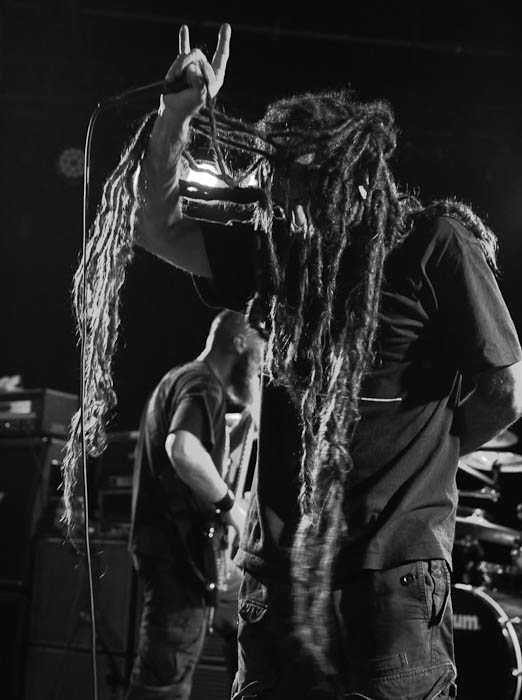 We’re crawling down the 101, giggling furiously because a Four Runner full of frat boys are pointing at us, one going to the extreme of hanging out the window waving horns in the air and tearing off his shirt.

The temperature gauge kept climbing higher, and higher, and higher as we traveled from LA to the desert suburb of Pomona until it reached 107 degrees. We lackadaisically wandered into the venue, catching the end of Pilgrim‘s doomy set. It was barely 2pm. Sweaty, buzzy, full of anticipation, the heavy and heady Rhode Islanders (who are all around 20 years old!!) dished up a somber beginning to the metal matinee.

But an enthralled crowd already watched on. Not only was this a much beloved free Scion event, but it was also part of the 30th anniversary celebration for Metal Blade. And this showcase showed off the breadth of metal they have under their wing.

Next up, LA’s own Gypsyhawk brought their good timin’ metal to the stage. Currently in the midst of a headlining tour, soon to be followed by a long stint supporting The Sword, the ‘hawk’s hip-swaying, beer-raising music may not have been in line with the death metal focused crowd’s usual tastes, but they grabbed attention regardless. It felt like the polar opposite of Pilgrim, and I loved that we could experience both in the span of two hours.

Battlecross describe themselves as “Blue Collar Thrash” which fits their home turf of Detroit. They started off with some serious windmilling, and their high energy set exhausted me just watching. As it got hotter and hotter in there, we made our way outside to get some fresh air, where what I’m assuming was a Mexican Independence Day festival was going on across the street, with music in dire opposition of what was occurring in the Glass House.

Things really started getting heavier for Cattle Decapitation. It had been a long time since I’d seen them; I will always remember them as one of the first metal shows I went to by myself as I was getting back into the genre, and I was admittedly a little scared at the time. My how things have changed…have I devolved or evolved? That feels so long ago…anyway, as Cattle Decapitation tore through their set, we stood in front of a fan and watched everyone look on with a little restraint, to reserve some energy for the grand finale.

We stood directly at the back of the room as excitement rose when the members of Six Feet Under walked out on stage. They went directly into Cannibal Corpse’s “Stripped, Raped, and Strangled”, which as we all know I love. I’m mouthing the words and moving along, and at the exact moment I lift my phone up to take a photo, a dude crashes into me and I take an elbow or something right into the solar plexis. “All I know is I love to kill” If that wasn’t fun enough, I lean over to talk to my friend and someone else crashes into the back of me, and I get ragdoll thrown into her and my head hits her jaw. Now, I’ve been with this girl before when I lost a few teeth, and now I’m thinking she has lost a few herself. Luckily she had not….but we decided it was a good time to move.

I saw SFU earlier this year, and since then have seen Cannibal Corpse twice, so seeing SFU again was like seeing a perfect balance of death metal giants. Chris Barnes thanked Metal Blade for so many years of support, and I watched label founder Brian Slagel sink further back into the corner he was already standing in. The show capped off with “Hammer Smashed Face”, to which every sweaty individual mustered one last bit of energy to move along to.

It was odd to be worn out from a show and riding back into the sunset at a mere 6pm on a Saturday. But it gave me the entire rest of the night to….lay on my couch and watch Louie. What is happening to me?!

Author HardRockChick 2
Last year’s Guitar Hero Championship was lots of fun, so I was looking forward to this year’s. It’s an interesting event to compare to...
Read More

Author HardRockChick 5
Beyond the fact that I’ve burned out almost every person I know on accompanying me to see live music, offering up a band called...
Read More