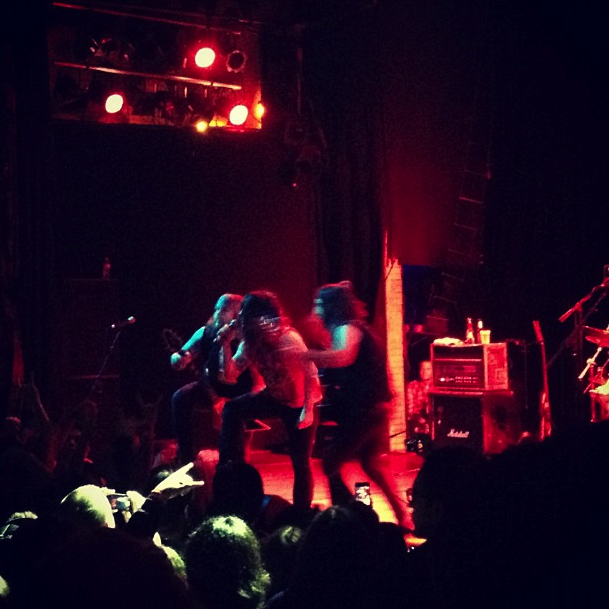 I’m at the tail end of a long list of metal shows I threw on my calendar when I arrived in LA to immerse myself in the scene. I’m tired, I’m burned out, and oddly enough…I don’t have a lot to be pissed off at right now, so metal just doesn’t sound as good as it normally does to me. Uh-oh!

Nonetheless, I pulled up by my lonesome to an unusually deserted valet area at the House of Blues Sunset…I don’t think many grindcore fans are willing to dish out $20 for parking.

Attitude Adjustment are onstage, and it’s been a long time since I’ve seen them. The crowd was oddly mellow, saving up energy for a long night. Someone kept heckling the drummer every time they broke from a song. As I stood there and watched with my arms crossed, I realized I was the one that needed and attitude adjustment, so I snapped out of it and was determined to enjoy the rest. 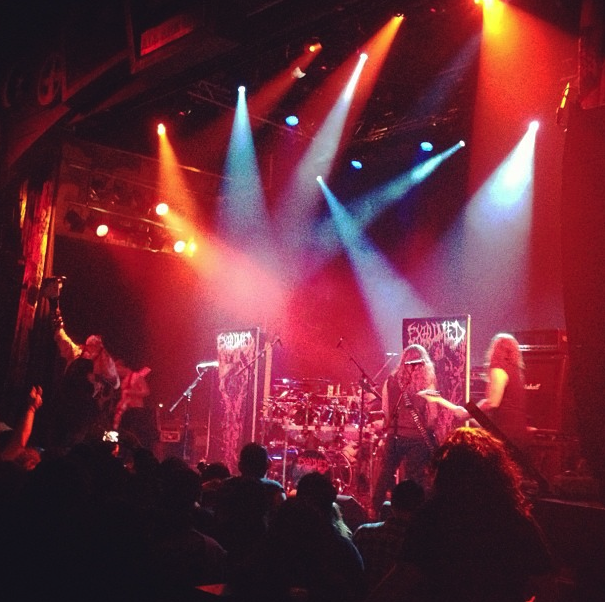 I’ve seen Exhumed a bunch this year and am looking forward to hearing their new album recorded by Ryan Butler of Landmine Marathon. After AA, they sounded even heavier than normal. I kept seeing a dude creeping behind the curtain, and it turned out that this would be an Exhumed set with bells and whistles, or chainsaws and decapitated heads. This “stagehand” took the chainsaw to the crowd, and doused them later on with “blood” from the decapitated head. I skipped GWAR this year, so between this and Ghoul I was still able to get my annual dose of bloody theatrics. Exhumed also had Barney from Napalm Death join them for a song, providing a glimpse of what was to come. 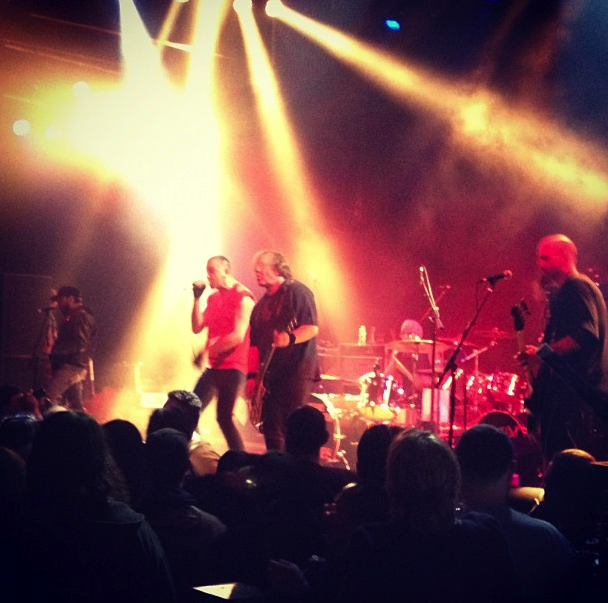 It had been a while since I’d seen The Dwarves. How does one describe The Dwarves? Hmmmm…”your favorite hardcore punk band…bitch” says Blag Dahlia. You’ll bang your head, laugh, roll your eyes, get kinda creeped out, maybe a little oddly turned on…The Dwarves make raunchy, honest music that’s catchy. By this time, the place was getting packed, and fans were singing along and getting tossed the mic. I will never be part of the punk scene, but I love to be a spectator. 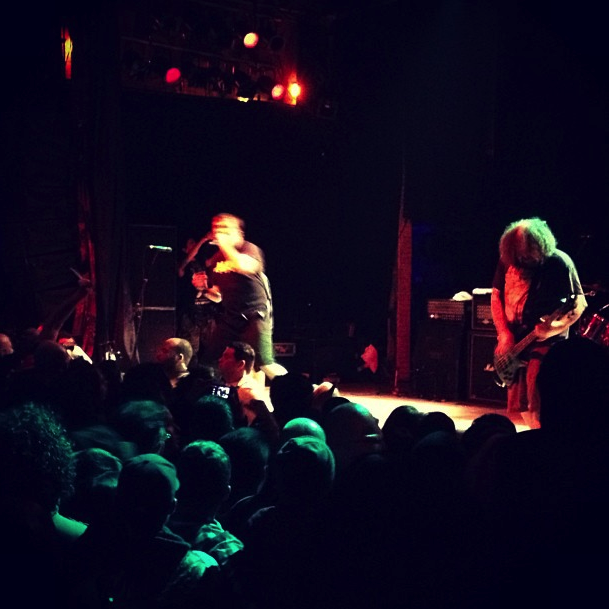 This was my first time seeing Napalm Death, which will soon be followed by more times since they jump onto Barge to Hell with Municipal Waste and your very own HRC in less than three weeks. One song in, and I was concerned for the safety of this cruise. Napalm Death are one of the heavier bands I’ve ever heard, and that says a lot when you are hearing a proper British accent between songs and that doesn’t even negate things. It wasn’t until this set that I think I truly experienced what grindcore is as a genre…leave it to the British to educate me. That groove under the heaviness of it all, it was demented, it was sick, it was something I should run away from. I’m honestly not sure why Napalm Death didn’t headline this show; perhaps it was because if we left on that note, we would go out into the world and be inspired to wreak havoc upon it.

It was really weird to see Municipal Waste on such a fancypants stage…to me they are a small venue band, and that’s not meant in any derogatory way. But as soon as they launched into “Headbanger Face Rip” and everyone around me started singing along, including a group of younger girls who were drunkenly filming each other…it became official. I’ve been covering these kinds of shows long enough to start seeing the bands that are working the hardest make the transition to the bigger stage. Waste is, to me, is a party metal band…the songs are anthemic and lack any real serious undertones, so the whole vibe of the room completely transformed. That is until some dude climbed a stack of speakers to dive what I thought would be to his and several others’ deaths. How did Machine Head get banned for HoBs but not these bands? Rhetorical question.

This show was meant to be my kickoff party to Barge to Hell, and it served more as reality setting in that I’m gonna be locked up on a boat for days with these people. Will I survive? Will they survive? These will either be some of the best or most terrible days of my life. Either way, it will probably end up being great reading material. STAY TUNED MOTHERFUCKERS.

Author HardRockChick 4
I like to play Guitar Hero. So when I saw the Guitar Hero Championship listed on the Great American Music Hall’s calendar, I thought...
Read More
My Musical Adventures

Author HardRockChick 10
It’s night 1 of 3 this week for seeing The Faint. The Fillmore is teeming with in-the-know music junkies. Shy Child, a New York...
Read More
My Musical Adventures Rockin' You Soon