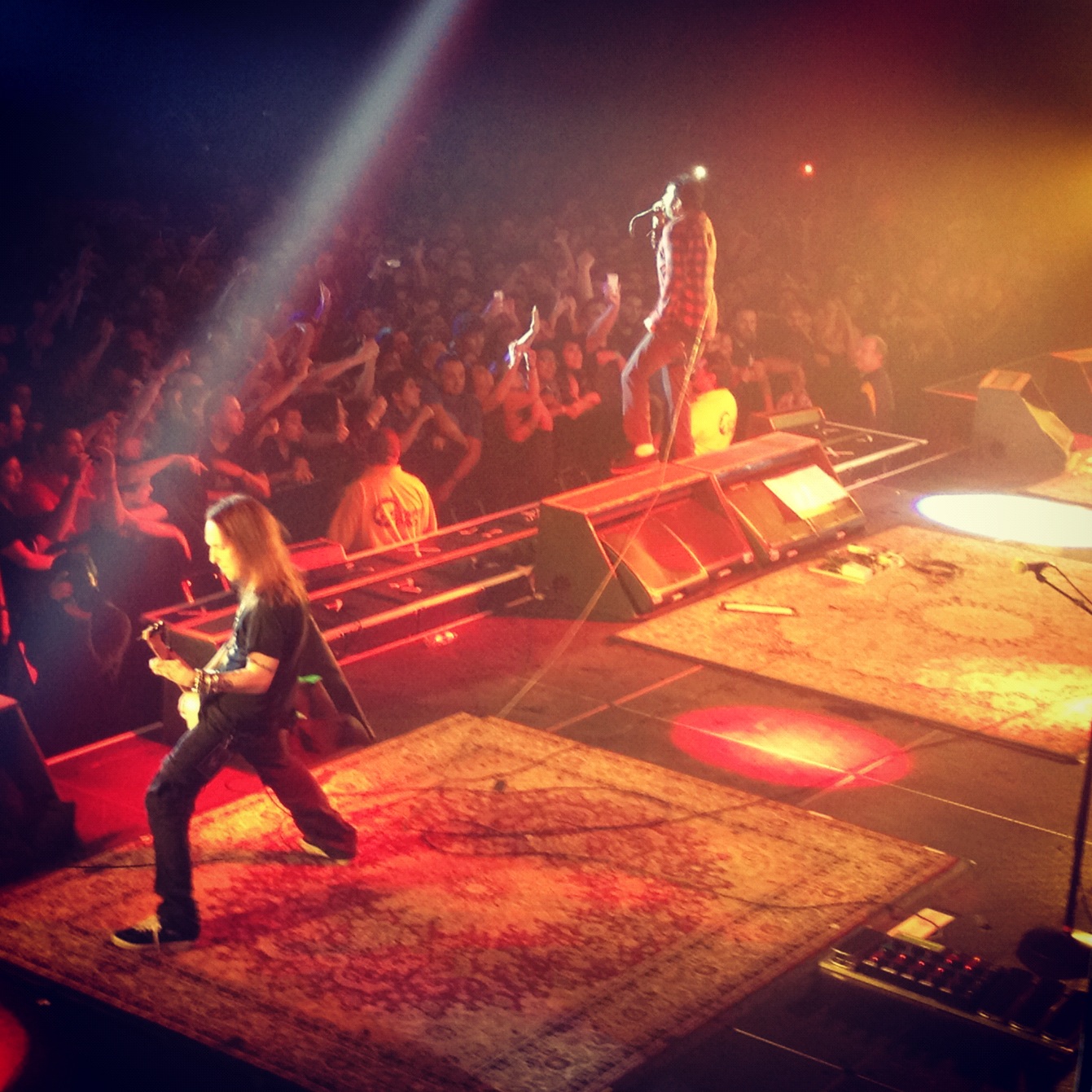 “Our minds bend
And our fingers fall
Entwined, we dream
I know

Time shifting
We discover the entry
To other planes 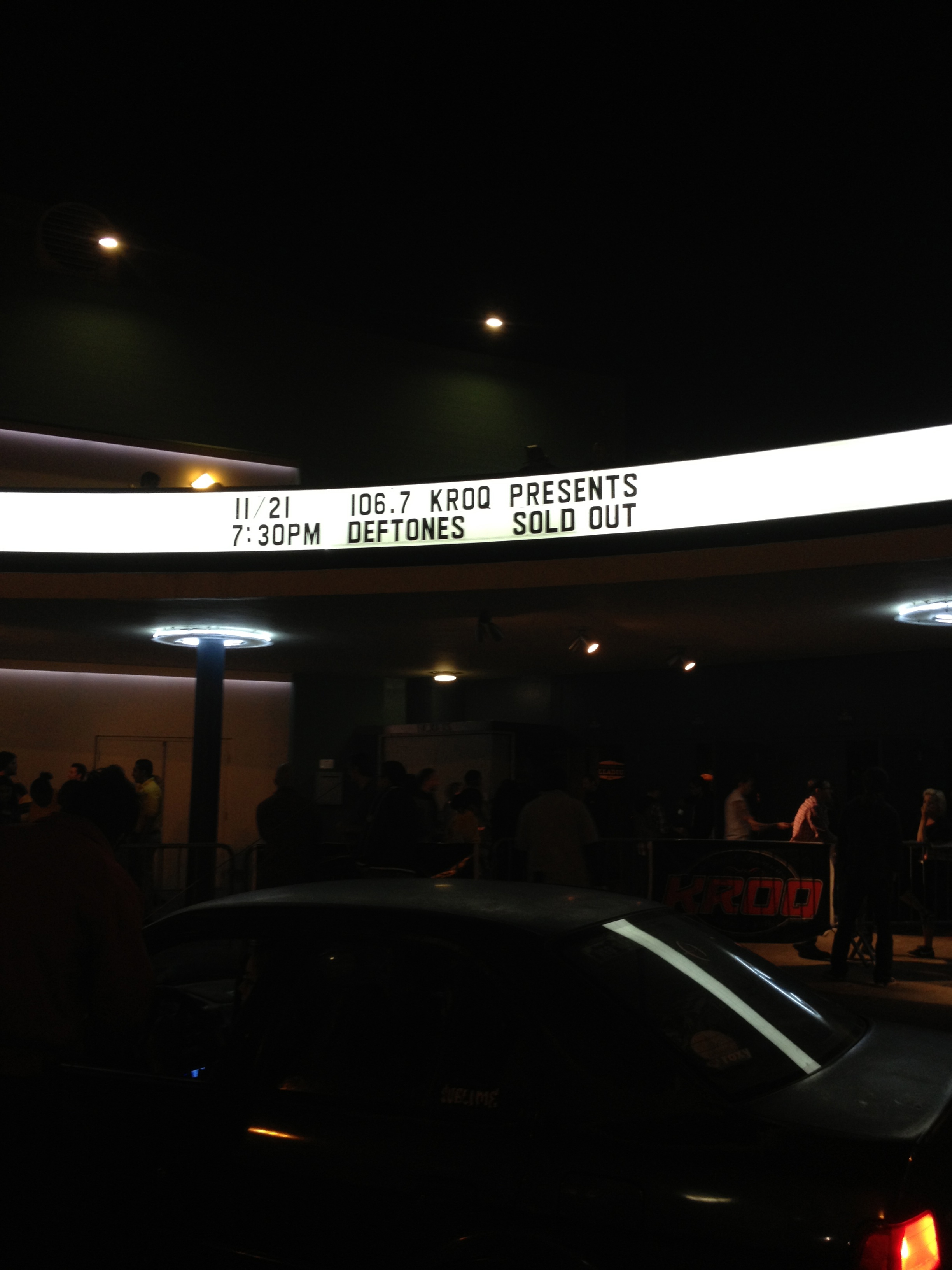 A little over a month ago, I found myself in the foreign land of Ventura at the first official date of the Deftones tour in support of their latest album, Koi No Yokan. Pre-release, the new songs they played were mostly foreign to my ears. Regardless, it was an amazing show with one of the most polarizing bands I love.

Fast forward to a day before this show, the final show of this tour, and I found myself without a ticket. I did something I rarely do- asked for a favor- and the night of the show I ended up with a special wristband happily standing by myself above the stage in the VIP balcony. Normally I would prefer to be amidst the masses, but tonight, alone, I wanted to see Deftones from a different perspective. That’s the beauty of seeing bands so many times to me; experiencing the show in many different ways.

Now that the new album has released, I haven’t been able to stop listening to it. The last two Deftones albums have almost scarily synched up to my life; Diamond Eyes was written in the wake of bassist Chi Cheng’s accident and contains a certain melancholy and anger to it; incidentally, it released as I was losing my mother to Cancer. Koi No Yokan, named after a Japanese proverb which means “falling in love”, contains the idea of destiny in the wake of difficulty. This album comes at a time in my life when I have come to terms with what has happened to me and feel very fulfilled by my actions in the wake of tragedy. 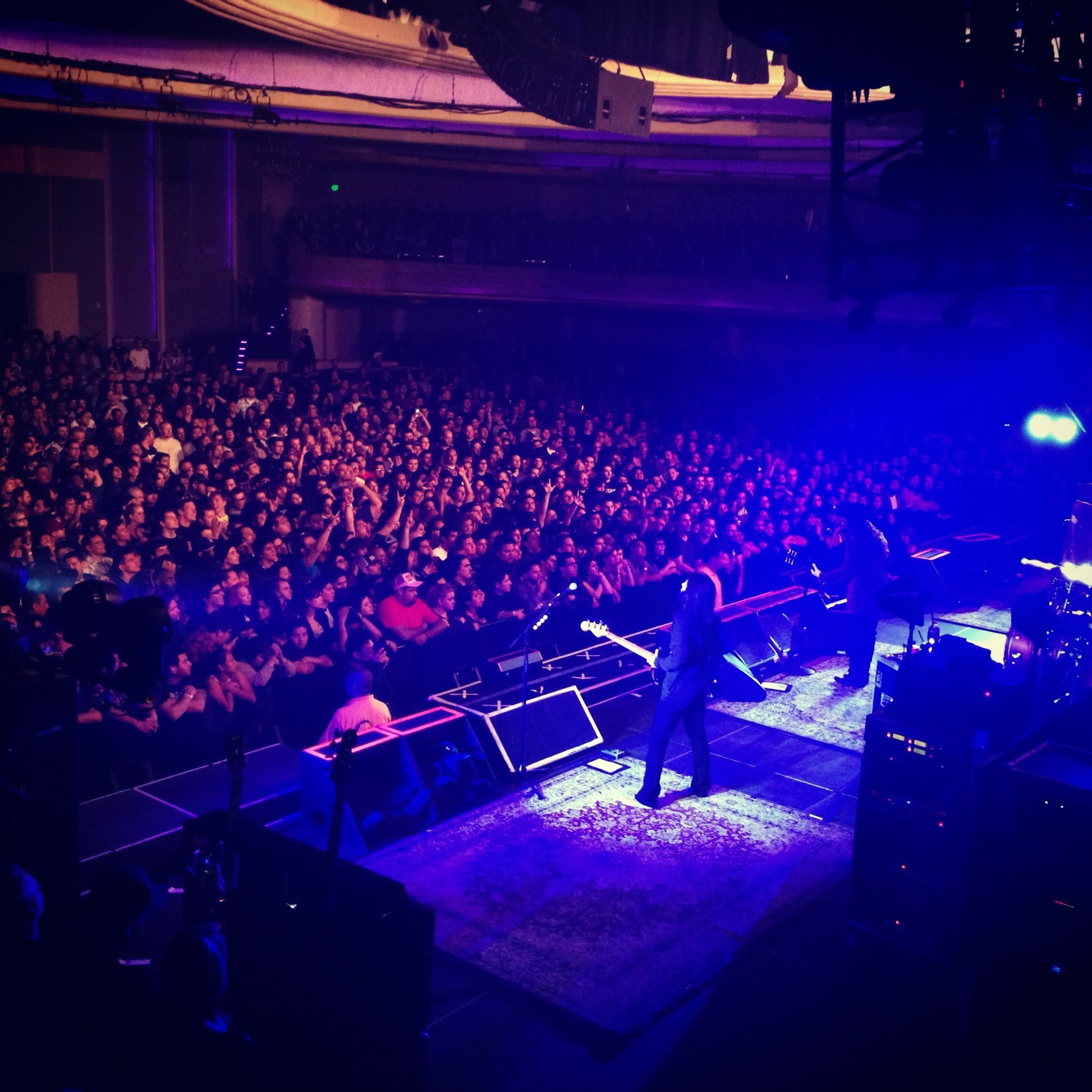 As Scars on Broadway play, I make friends with my neighbors, fielding questions about going to concerts by myself. They say music is personal, and in particular, these last two Deftones albums are very personal to me.

The setlist has evolved since Ventura, and Deftones explode on the stage to that first title track off their last album, “Diamond Eyes”. Between sets, I had seen a brutal fight break out- Deftones crowds are always drama-filled…and now seeing it in action during the first song, I wondered how I had survived so many of these shows over the years. Onto another track from DE, “Rocket Skates”, Chino is doing his iconic high knees trek across the stage and he loses his shoe. He’s holding it in his hand as he struggles to put it back on while screaming. 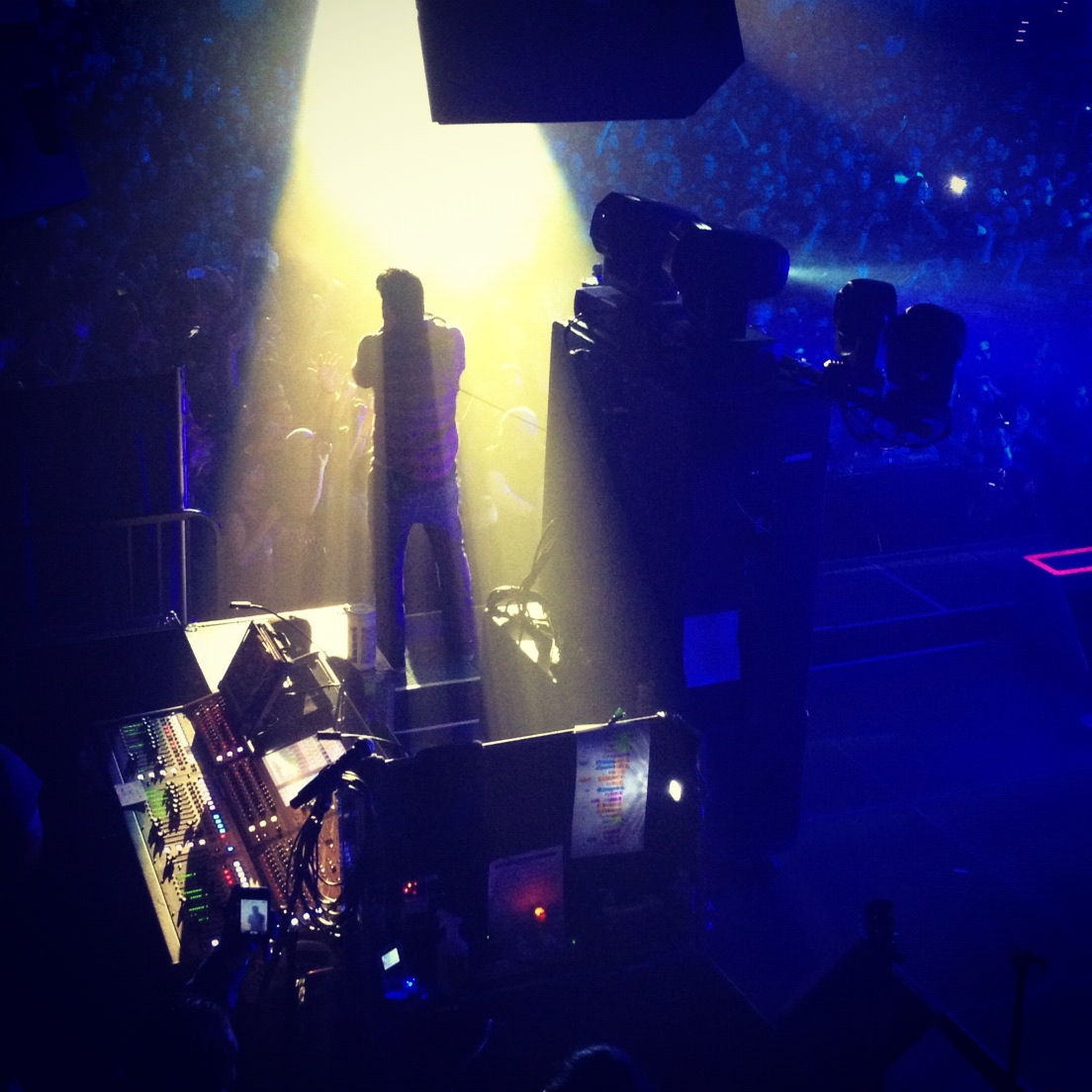 As we go into tracks from Around the Fur, I can see the original fans light up in the crowd. It’s hard to believe that Deftones have been around for 20 years, spawning multiple waves of fans at this point.

The unmistakeable intro to new track “Poltergeist” kicks off a string of new tracks. Barely a month old, the crowd treats it as a classic. “Poltergeist” lyrically deals with something familiar to many of us: headgames in matters of the heart: 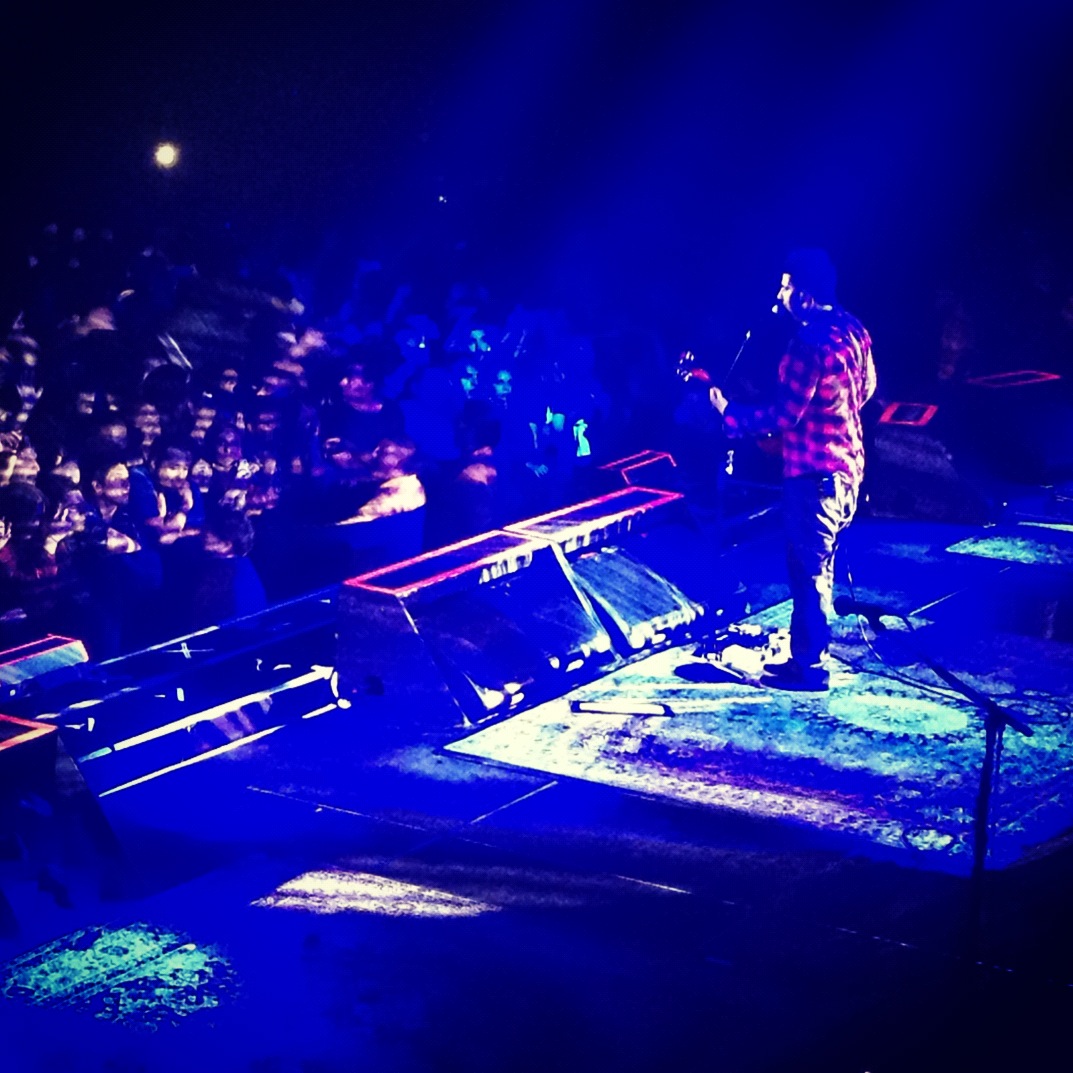 I’ve said it before, and I’ll say it again: Deftones write some of the best sex songs. “Rosemary” is their newest example of this. In stark contrast to “Polterheist”, this track explores the intimacy of joining forces with someone. It always amazes me how Deftones can have songs like these last two work together on an album, not to mention work in a live setting with a bunch of dudes who are wailing on each other. But they do, and to me this is part of the beauty of this band.

“Swerve City” is the first track off the new album, and perhaps the simplest song lyrically: the idea of allure. It also reminds me of how Deftones’ riffs are so infectious, and how the beats that back every song are so key in filling out their sound. Nothing is merely there, it has a purpose, it has a starring role.

Three tracks off White Pony: “Feiticeira”, “Digital Bath”, and “Knife Prty”, came next. Then, my favorite track from the new album, “Tempest”.

I think the lyrics are really interesting, referring to internal changes after a long period of dormancy. This song really captures the essence of the Japanese proverb the album title references, a light at the end of a tunnel.

“Fireal” is one of my favorite Deftones songs; it’s just so weird. I liken it to Mastodon’s “Bladecatcher”; a large part of it is just weird screaming. “Engine No. 9” made me very happy I was not in the crowd. “Change (In the House of Flies)” from the perspective I was in reminded me that techs probably do not get paid enough for the stress they endure in their job. Chino was having a lot of problems with his guitar, which resulted in many dirty looks to the side of the stage, a frantic tech running on and off stage, the song nearly stopping, and, ultimately, the guitar being tossed in the air to it’s ultimate punishment.

And that was when the show got really interesting.

Part of my current feeling of fulfillment and- dare I say- happiness is due to my moving to LA full time. There are several components of this: friends, weather, health….but the potential for the best music experiences in the world are a huge part of it. And the rest of this set would be one of those “only in Hollywood” types of sets.

Perhaps there was a spoken intro as to why this song was played- but sound was weird where I was. But Deftones played “Steppin’ Out” by Joe Jackson. What?! I had seen some lyrics sheets waiting backstage and I was wondering what song that could be for….this would have never crossed my mind. 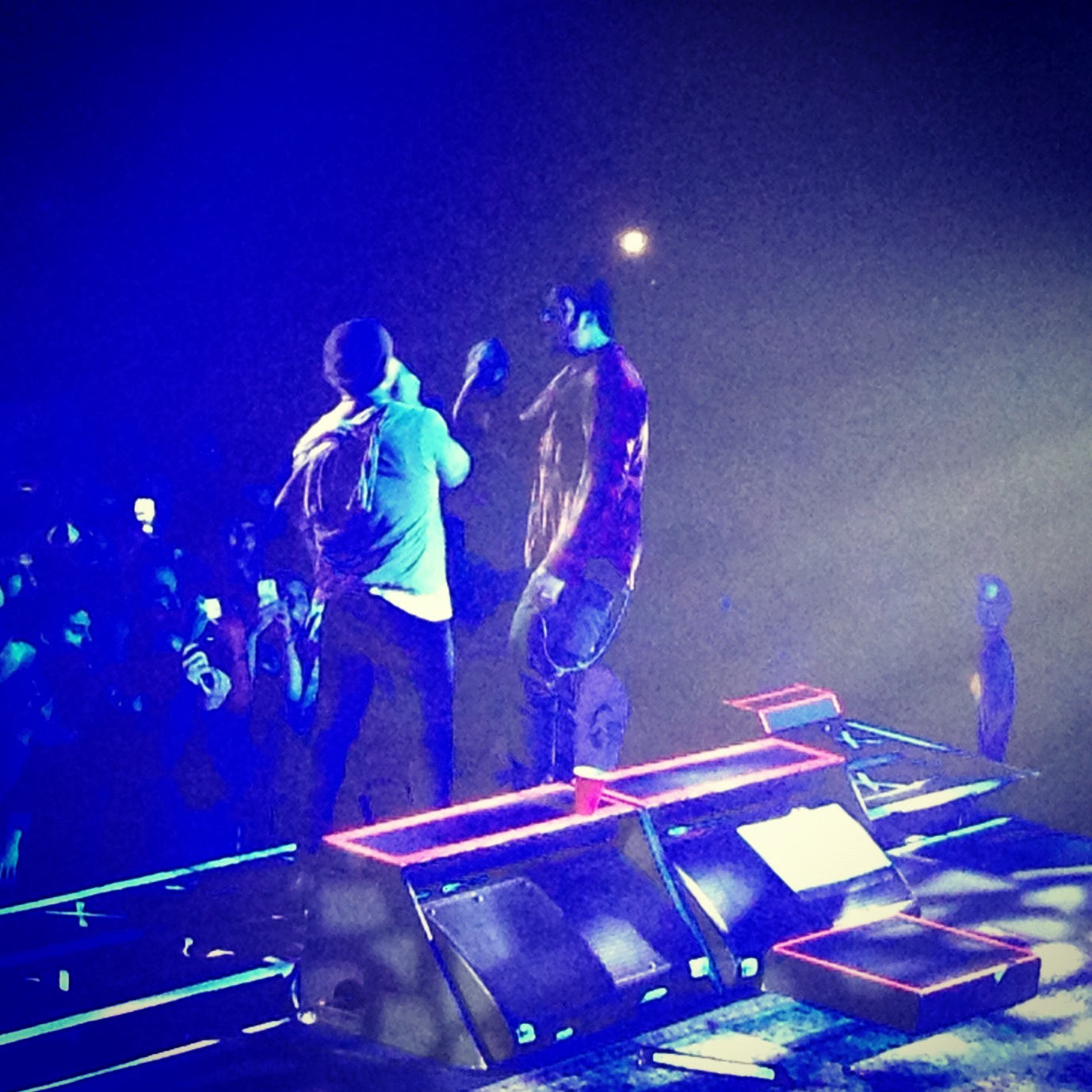 After Chino kept repeatedly yelling at the audience to “shake it!!”, a familiar figure emerged onstage for “Passenger”. Greg Puciato of Dillinger Escape Plan- one of my other favorite bands, joined the band just as he did for last year’s tour together. The best moment was when Chino picked Greg up and spun him around a bunch…reminding me that being a rock star is one of the best jobs in the world. It just looked like they were having so much fun. Sure, one day I would love for that special guest to be Maynard…a girl can dream.

The encore began with that clawing riff in “Bored”, perhaps the oddest topic for a metal song. Then, a reminder that tomorrow was Thanksgiving as Chino ragged on the VIP section to throw him a drink.

Next, “Root” featured another special guest…Alexi Laiho from Children of Bodom. As my mind was so confused pairing these two together, I wondered how many people in that room even knew who he was. It was VERY strange to hear a shredder like Alexi play on a Deftones song.

And then, it was time for the final “7 Words”, every Deftones fans’ signal that the show has come to an end.

It’s been a good year for shows…but this was probably the most fun I’ve had at a show in a very long time. Of course, there’s still December left…

Author HardRockChick 0
It was through the kindness of someone who I met through my NIN pieces that allowed me to follow one more tour before the...
Read More