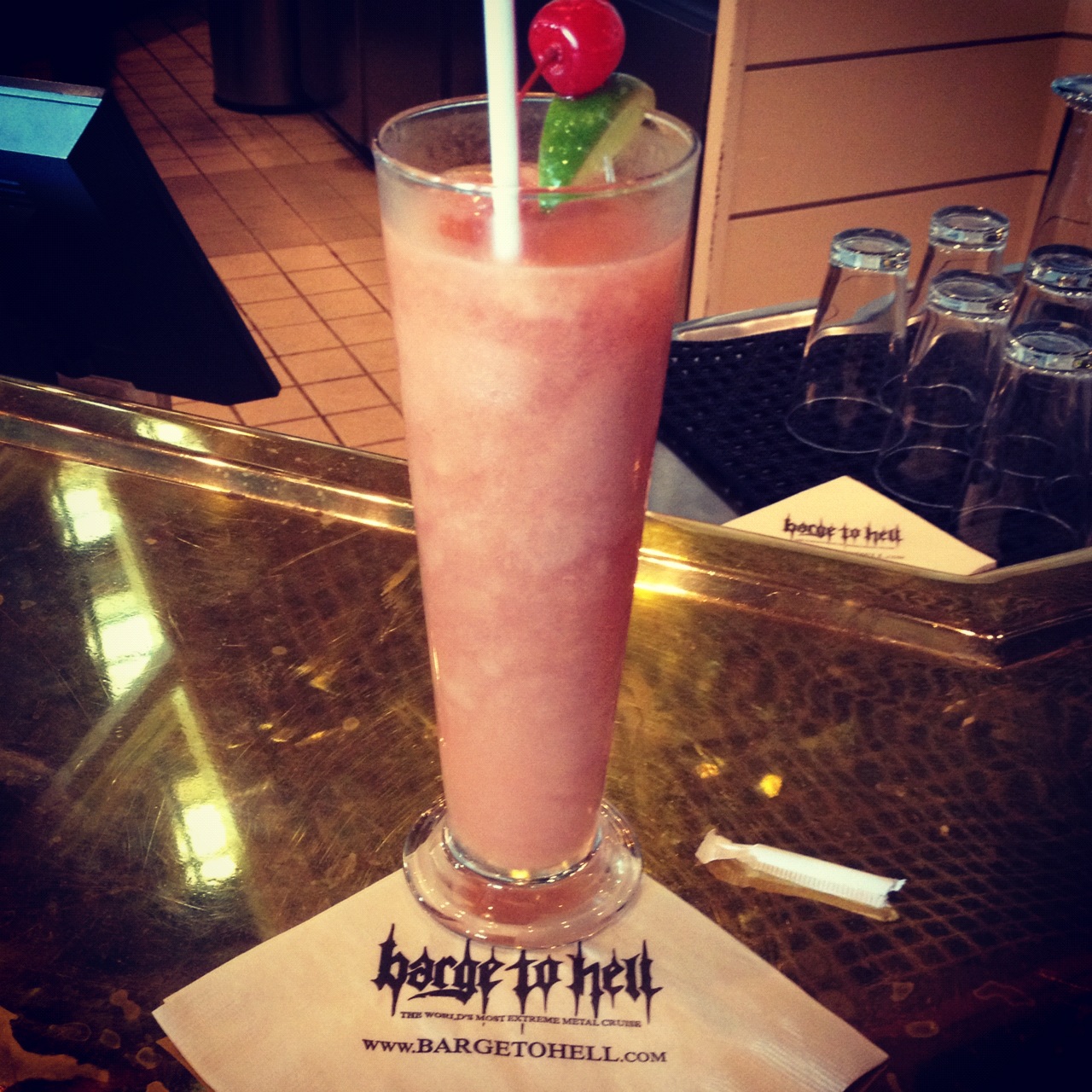 I have this thing where I’m really attracted to stuff that both excites me and freaks me out. So when, this summer, my friends and I decided to go on this metal cruise called Barge to Hell….to my friends all dropping out….to months passing with little thought of it or announcements of new bands on the cruise…to a few weeks before…I went from being excited about it to realistically thinking that this was not a good idea. My life is in a different place right now than this summer (sort of) and I was thisclose to canceling this cruise. But…something told me to stick it out…and I’m glad I did.

I’m pretty used to people calling me crazy…in fact I have the nickname of ‘Crazy J’ in certain circles (not for reasons you would think- more that I make weird decisions like to jump off tall buildings or taking on too much work)…but nothing (NOTHING!) incited more harsh reactions of craziness than telling people that I was going on a metal cruise by myself. Truth be told, I feel more comfortable around extreme metal bands/fans than most other kinds, and this experience proved my theory that this crowd is pretty harmless. I guarantee you I would have spent more time hiding in my cabin had I gone on one of the more mainstream rock cruises.

Being on Barge to Hell was a truly unique experience that I’m not sure I can completely convey here. As someone who doesn’t do festivals, it was a happy medium between a festival experience and an intimate club show (perhaps part of that was because it wasn’t at full capacity: 1200/2000 tickets were sold). As someone who’s been writing about concert experiences for 6 years, it was refreshing to be in an environment that was completely new. I watched 23 bands play 33 sets, and I barely got tired because it was just an easy, relaxed set up.

I felt the best way to capture my Barge experience was a play by play time diary I kept while aboard the ship. See that below. Otherwise, I got to cover this for the GRAMMY site and made a short highlight video, also below.

Read the short version on GRAMMY.com

10:02AM arrival at port. Bag checked with porter who asked what band I’m with. When I said none of them, he said oh, you just follow them into the ocean….ok.

10:45AM breakfast across the street. Cuban coffee has drugs in it.

12PM meet friend of friend to wait in line to get on boat. starting to get excited?

12:30PM check in behind Enslaved

12:45PM: ha, they are really playing metal through every speaker on this ship.

1PM the shock of seeing my room…

6:05PM exodus as the boat begins to sway. Moderately intoxicated…fruity drinxs are sneaky.

10:30PM nap on couch in theater before behemoth…while the tech checked Inferno’s drums for an hour. sheesh, can’t you see I’m trying to nap!

12:30PM sodom on the pool deck, that sounds dirty.

1:30AM shower and bed before 95% of boat. Watched an episode of Mad Men. Slept like a baby.

10AM woke up as roommate got in.

11AM breakfast. Got fruit next to Nergal…no big deal.

12PM Watched a band from brazil in a theater that looked like I was inside a UFO.

1PM stood in line for merch for an hour to get a special Enslaved shirt, Grave panties, and a Mayhem hoodie, cuz I’m freezing. Got last small Enslaved shirt; made them take it off the wall!

2PM lunch buffet. Got pasta next to enslaved.

3PM Sacred Reich again, just saw them at Metal Blade party. First semblance of sunshine and desire to be in swimsuit. Refrain.

4PM Brujeria by the pool.

5:17PM: Solstafir from Iceland…they are great! But the boat was rocking so much I almost fell over :-/

5:55PM: Hi, my name is Jamie, and I’m an internetaholic. I just bought onboard wifi….

6:45PM: Napalm Death from the front row. Thought I might die, and that’s not because anyone was behind me acting crazy.

7:15PM: dinner buffet. i gave in and bought a drink in a blinking glass….

8:12PM: omg, I’m watching Mayhem with a blinking fruity drink glass in my hand while people are sitting in a hot tub. DEATHCRUSH.

10:55PM: oh yes, at the gates were all that i expected. and i saw crowdsurfers for the first time…the security just pushes them bck over the crowd, it’s kind of hilarious.

11:32PM: ummm, i’m watching people roll around in chairs in the pit for municipal waste…and i kinda wanna join.

12:52AM: I’m watching Sepultura with the entire boat….even the staff and crew in their uniforms. Is someone driving this thing? WHO CARES! I haven’t seen Sepultura since like 1997. Their new drummer is blowing my mind.

1:30AM: pizza party with metal injection

3AM: First one to sleep, again!

10AM: yawn, wait a sec, the boat isn’t moving…we’re in the Bahamas!

10:35AM: breakfast, room is blasting cannibal corpse and abysmal dawn

11:15AM: walk around nassau with french roomie. it’s kind of depressing. also, christmas decor in the Caribbean is weird.

1:00PM: depart on snorkeling excursion with my metal underground buddy. solstafir is on board with us!

2:35PM: ugh, it’s too cold to snorkel at this time of year…what was i thinking! also, after snorkeling in thailand, it’s all downhill…

3:37PM: on the boat back from snorkeling trip and they are blasting “call me maybe” and “gangham style”…and the metalheads are singing along! i die.

4:45PM: i’m crushed because i get news nachtmystium did not make it on the ship

6:45PM: dinner in the fancy dining room. i’m eating too much dessert.

9:35PM: so I’m watching Grave and two weird things happen: they start by saying: “are you ready for us to rock your socks off?!” (WHAT!) and then at the end Grutle pushes past me and stands on my toes for the last couple songs. This happens to me a lot. Awkward…

11:15PM: at the gates…everyone keeps trying to peer pressure me into drinking…not buying it! funniest thing overheard at this set: “oh yeah, this band is kinda mellower than the others.”

12:15AM: moonspell by the pool, i was pleasantly impressed!

1:45AM: mayhem in the theater…killer set, until the bassist started dramatically drinking some fruity drink between songs. we’re not in norway anymore….was still great, though. to buy their “burn your local church” shirt or not….

2:35AM: municipal waste is gonna fuck you up! and throw frisbees….

10:55: dark sermon…talked to the lead screamer the other night. they were a last minute add, he had to quit his job for this!

11:43AM: coffee by the pool with november’s doom. they do a woods of ypres cover….sad story.

2:15PM: caught a few songs from my new friends in headcrusher!

3:05PM: watching rotting christ…and watching nergal sing along. oh, and then nergal appears next to me and has his friend take a photo of him with rotting christ in the background. cute.

3:45PM: escape to the front of the boat to read my book, naked lunch. it freaks me out more than the bands here.

4:55PM: possessed! YES! watching members of so many of the other bands in the crowd for this.

6:13PM: go to room to buy the cheesy photos they are taking here. kinda weird to see all of the bands’ photos…it’s like spying on their vacation pics.

6:45PM: Enslaved by the pool, with the ocean in the background under the moon and stars, and they play “ground” into “materal”….one of my highlights of the year…so great. also, i decided to drink tonight.

7:15PM: dinner with the german roomie and the drummer from solstafir! we’re being fancy and order wine.

10:30PM: stumbled to top deck of boat to watch Behemoth from behind….INFERNO’S DRUMMING FROM THIS VANTAGE POINT, WOW!!!

12:45AM: I was watching Exodus for 10 minutes before I noticed they were wearing tuxes. Time to stop drinking….

1:20AM: Supposed to be time for Nachtmystium set. Where on the boat is Blake Judd? About to leave and drummer is dragging him in to play…this should be interesting.

3:15AM: everyone’s in the karaoke room for the last hours. there’s talk of us doing a beastie boys song. somehow i escaped this.

8:30AM: drinking on the last night was a seriously dumb idea.

9:05AM: I just went through customs with Mayhem, and am standing in a taxi line with behemoth. I’m going to miss this weirdness?