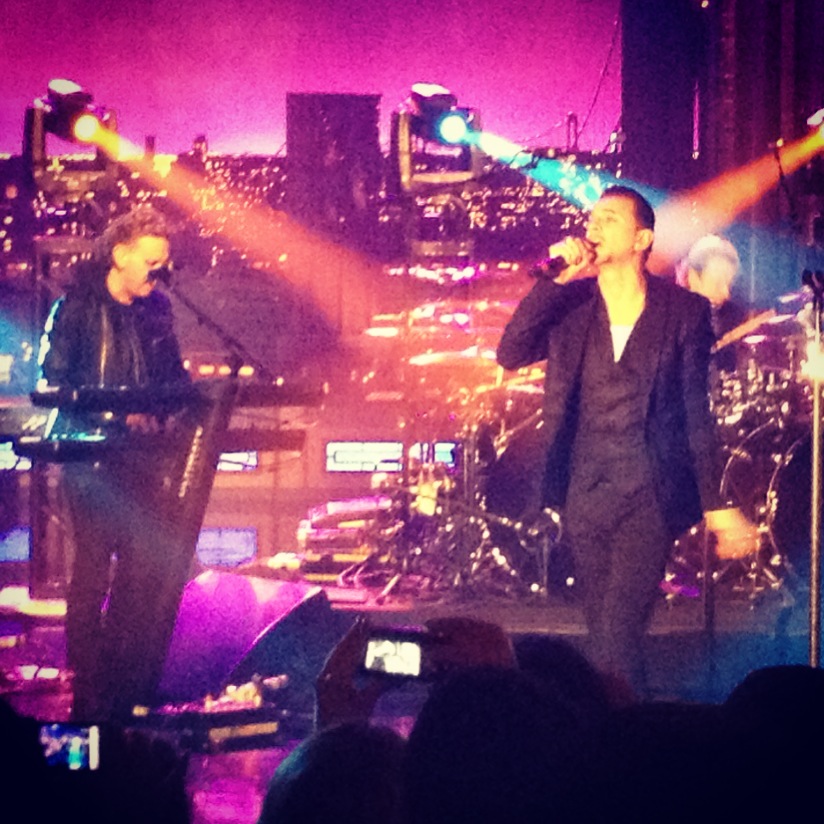 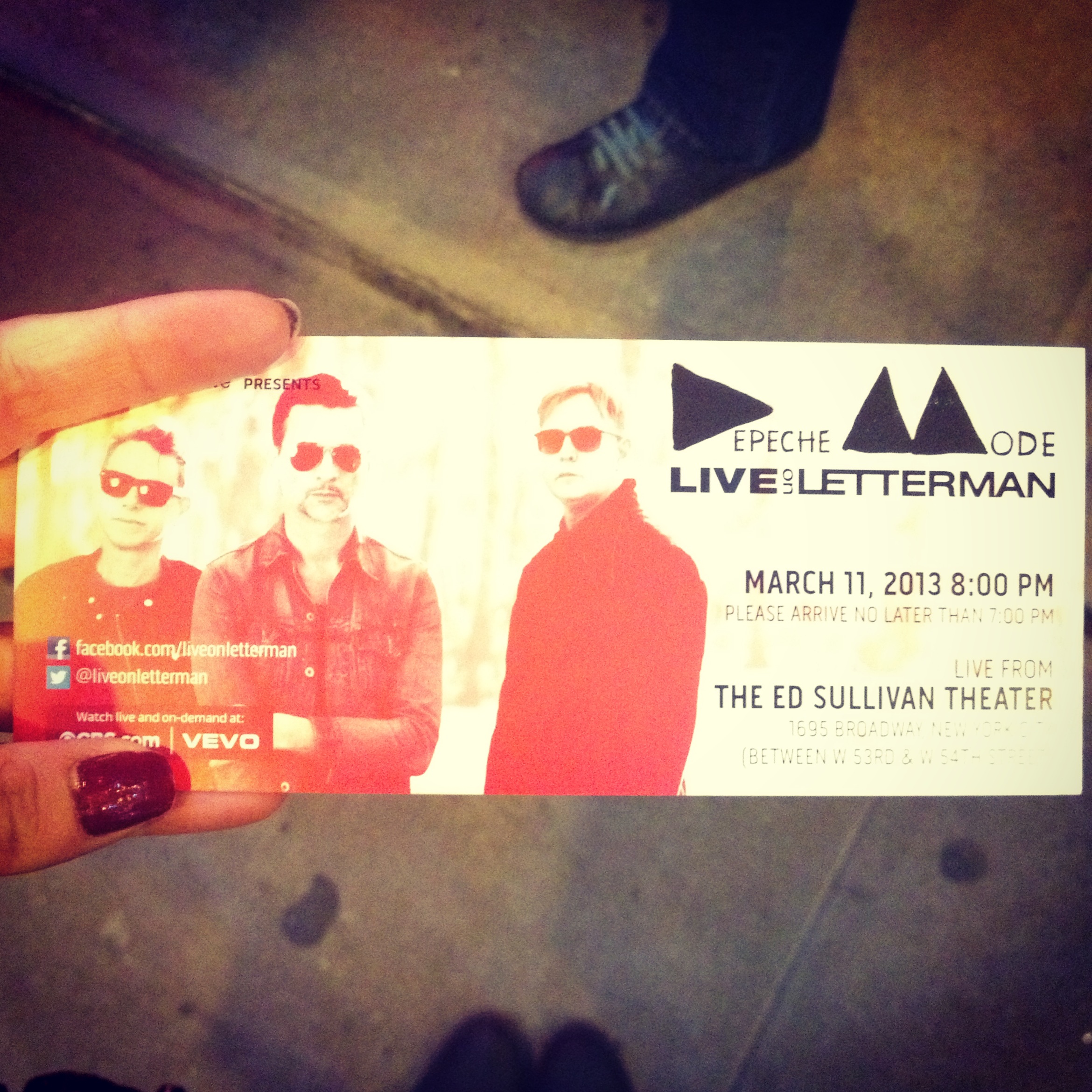 I’ve always said that when I’ve encountered a difficult time seeing one of my favorite bands…when I finally catch them, it makes up for it.

The last time Depeche Mode toured, the show I planned to go to in San Francisco was canceled. Before that, I never had the opportunity to see them, living in rural Texas.

So imagine my surprise when I was contacted by a friend about the opportunity to see Depeche Mode play David Letterman’s concert series in New York. It would be 2 days after my birthday, in a small theater, for free. And it wouldn’t just be a couple of songs…it would be a 45 minute set.

!!! Of course I was in. Having never done this TV show concert series thing before…I would end up doing it twice in one week.

I’m pretty sure the first song by Depeche Mode I ever heard was “I Feel You”. I became completely obsessed with it, and had to figure out who it was by in those pre-internet days. I even have the cassette single for it somewhere, because that was how I had to buy most of my music with my limited allowance back then. Do people even know what cassette singles are?! I can pretty much sum up my hormonal blossoming soundtrack between NIN and DM.

DM’s dark, dancey vibe appeals to the masses, which is sometimes a bit of a mystery to me. I think they are pretty edgy for a mainstream band. I mean, pretty much every DM song reminds me of lust, sex and/or drugs, with the occasional touchy/feely song thrown in there. Very few bands sound like DM; they’ve subtly evolved with the times, and their songs have aged incredibly well (except for “Just Can’t Get Enough”…I loathe that song!).

I was warned about crazy DM fans before entering the line to get in; and in my first exposure they ain’t got nothing on NIN fans, but are no less passionate. Tensions were high as this was the band’s first performance in a few years, and would be the first time they played songs off their much anticipated upcoming album, Delta Machine.

We were queued for about an hour with anticipations running high before being let into the small, ornate Ed Sullivan theater. Smack in the middle of the sixth row, I felt myself getting worked up into an unfamiliar frenzy. This moment was finally happening! I had gotten a tiny taste seeing Dave Gahan perform at MusiCares in 2011, but I was ready for the real deal.

I never heard girls scream like that for a grown band; when DM walked out onto the small stage, shrieks almost drowned out their first song, new track “Angel”. I’ve been fortunate enough to have a few opportunities to see songs performed live off of unreleased albums, and it’s an amazing way to experience it. “Should Be Higher” was next.

Dave Gahan relishes the knowledge that he is a deep-voiced sex symbol, often turning around and shaking his ass, much to the ladies in the crowd’s delight. In such an intimate environment, there were times when I was so enamored with his familiar tone, that it was easy to shake off the moments when it vaguely faltered. But it was Martin Gore’s guitar and back-up vocals that I truly dove into; this is the element that can only be experienced live…thus the missing piece over two decades of fandom. 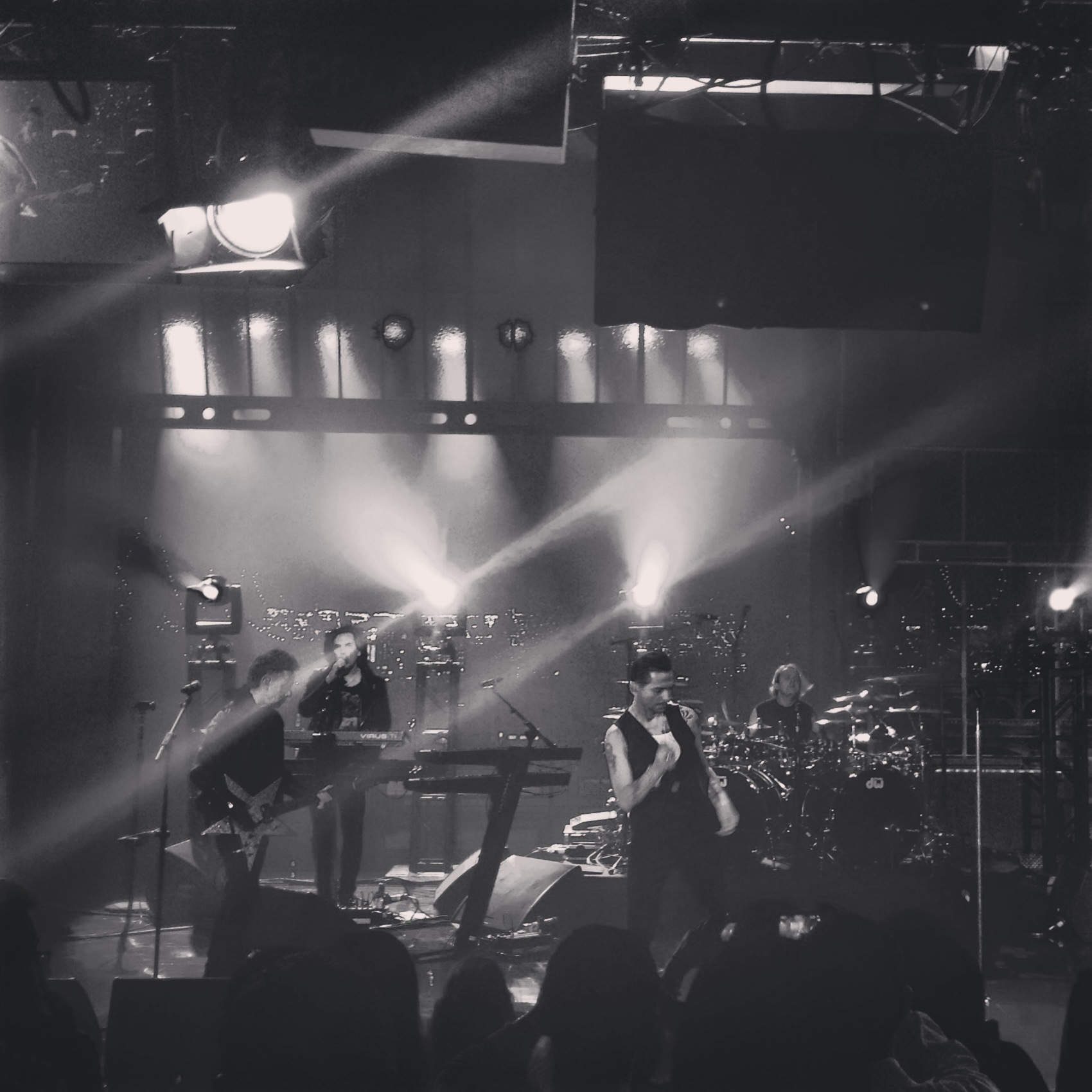 “Walking In My Shoes” greeted my ears like an old familiar friend, but it was “Barrel of a Gun” that was my surprise favorite of the night. Gore with the star guitar added a strange element to the song that I can’t even explain. And then “Heaven” live was truly divine…that song brings me chills.

The crowd participation and slight changes to songs quieted any worries that this atypical show would deflate my first DM experience. With the exception of a few suits in the room, and maybe some men dragged there by their ladyfriends, everyone was on their feet dancing. Especially during “Personal Jesus”.

“Soft Touch/Raw Nerve” and “Soothe My Soul” were the final new songs for the evening. The first was not my favorite, but “Soothe” was a great song rife with an only-DM feel. 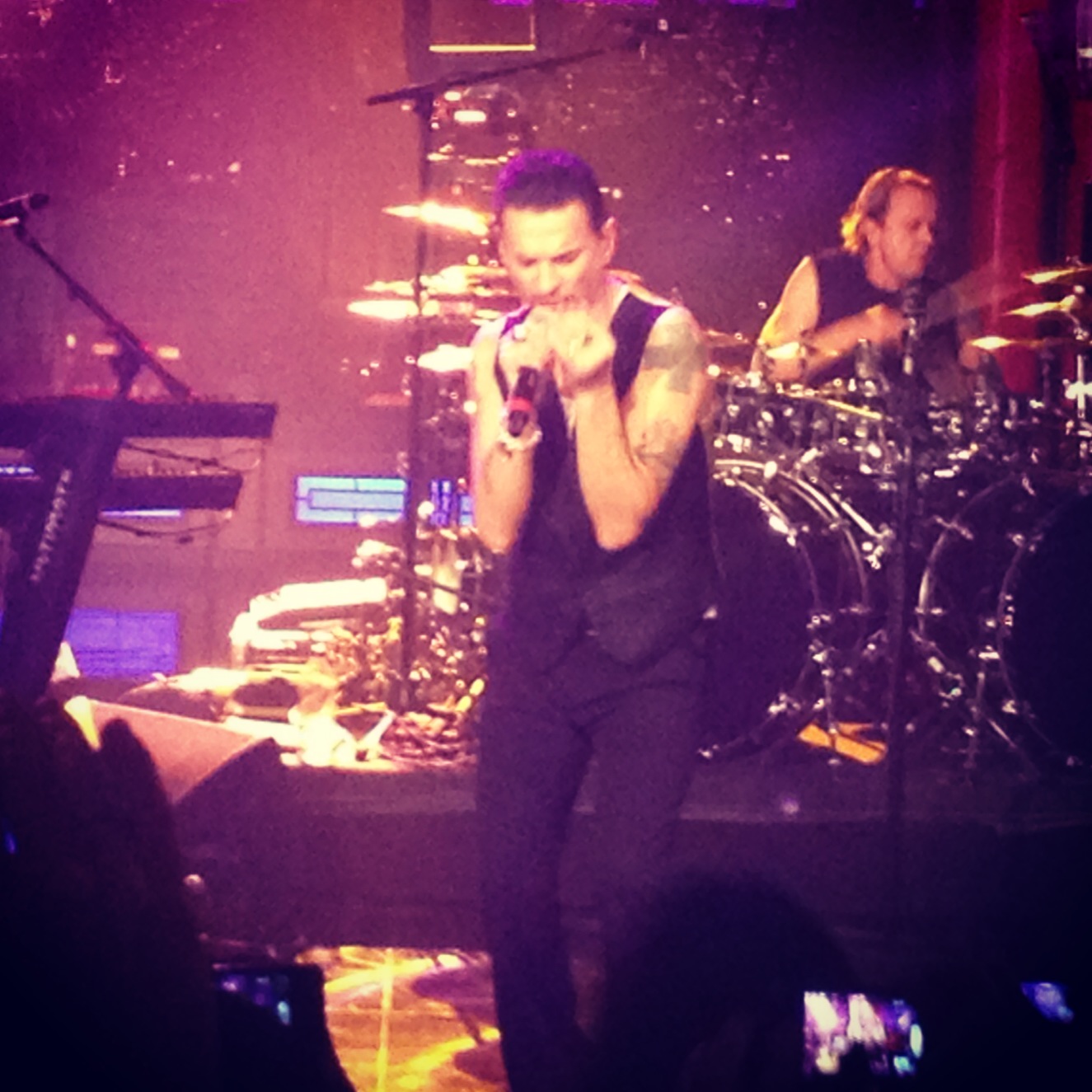 The final song, “Enjoy the Silence”, sealed the deal on the small, robust set. That song, those words, exemplify why DM is such a great band. This had unleashed a demon inside, the one the ravenously looks at tour dates and X’s off days til I can feel this again.

The icing on the cake was talking a guy into giving us posters from the show…perfect for my collection.

I’ve said it before and I’ll say it again, I am lucky to have amassed a group of friends who are as passionate about music as I am, and we all help each other out to make our musical dreams come true. And it is with a heavy heart that I have to dedicate this piece to one of my dearest friends and huge DM fan that was watching the webcast and encouraging me from afar, who lost one she loved most a mere hours after this. It is my hope that the love of music can help fill the empty space in her heart.

Stream the entire show and find me in the crowd here. 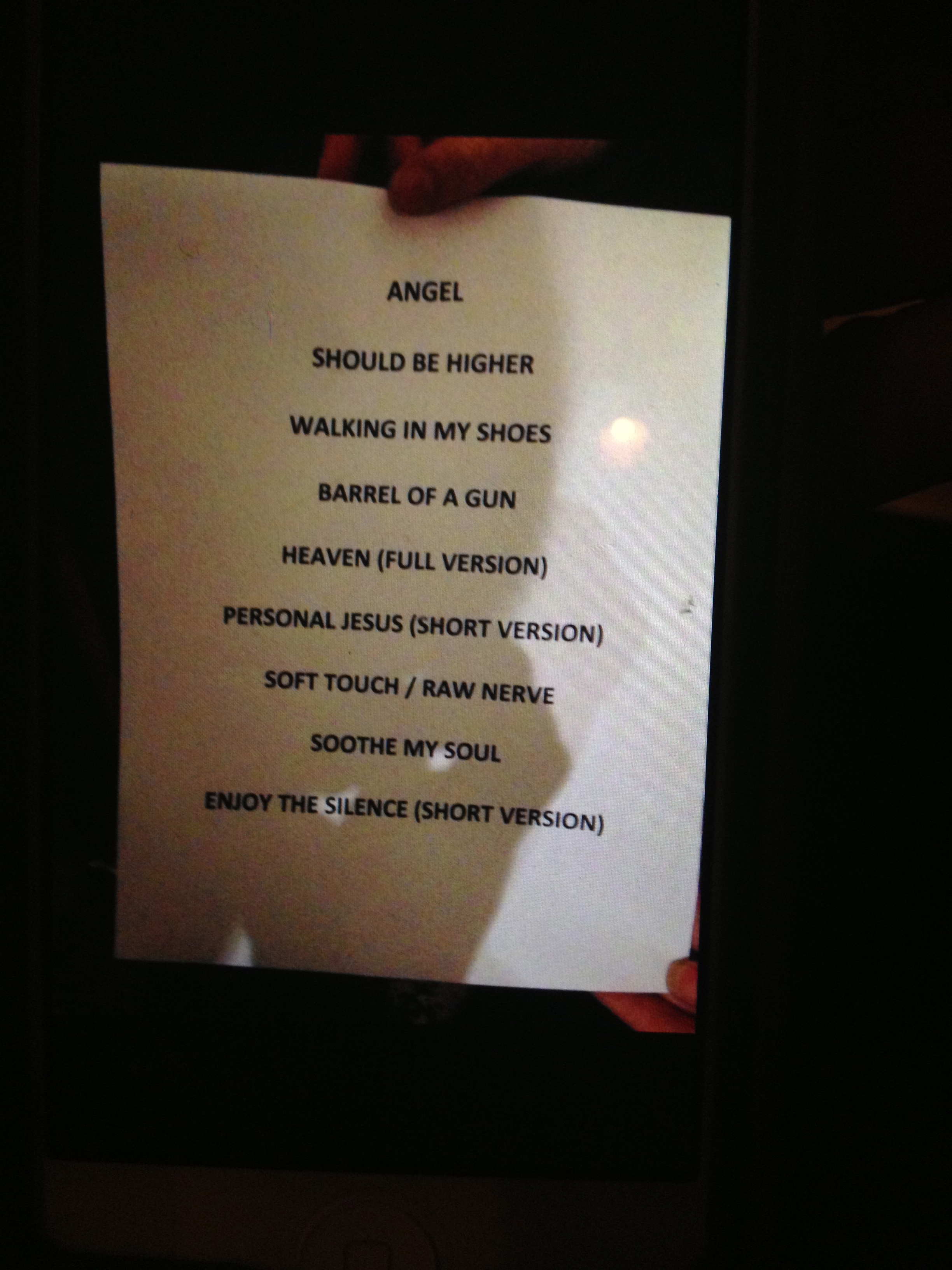 Author HardRockChick 0
It was my 115th and probably final show of the year. After a year where I’ve been to shows big and small and traveled...
Read More
My Musical Adventures

Author HardRockChick 0
“Are you the Hard Rock Chick?” I hear as I’m being searched by security. I say yes, and he tells me that I wrote...
Read More
HRC loves NIN My Musical Adventures