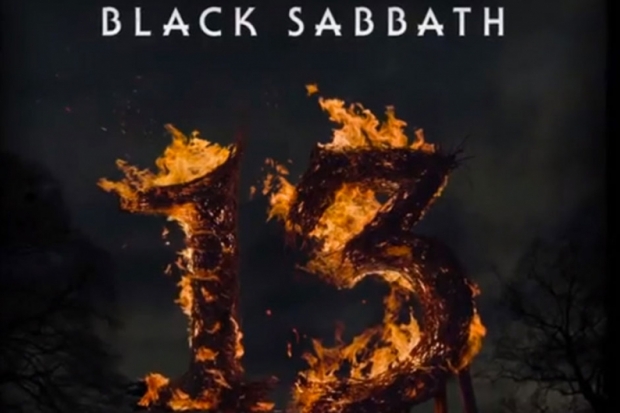 “Is your life real, or is it just pretend?”

~”End of The Beginning”, Black Sabbath

As I walked along the stars on Vine Street under the blazing sun of the hottest day of the year so far, my skin prickled as I saw the marquee: 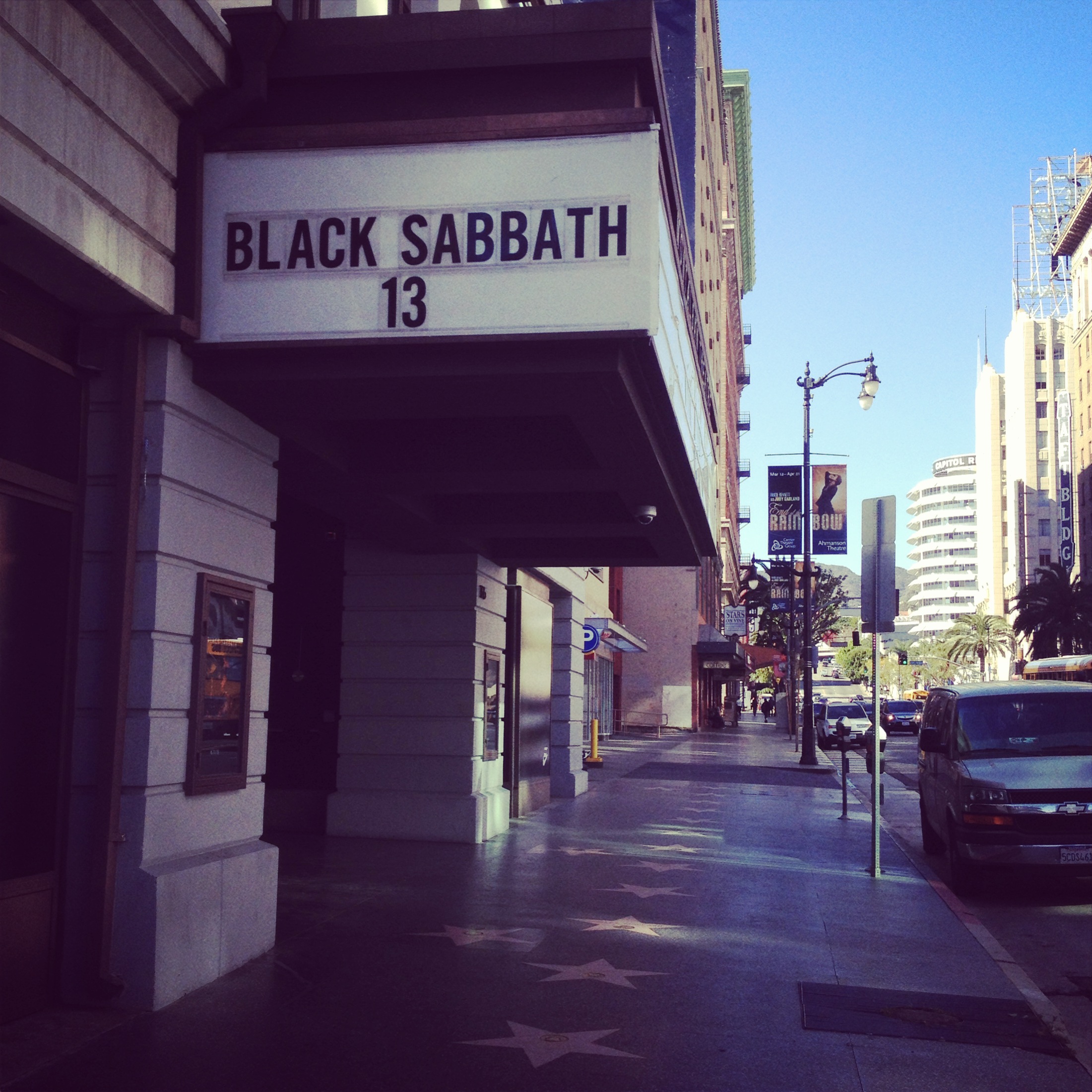 From Ozzy Osbourne being one of my first concerts…to leaving a Black Sabbath set at one of the first Ozzfests early because I was there to see Pantera…to getting so into Black Sabbath in my twenties that I was once asked if that was all I listened to…to now, about to be part of the first group of people to hear their new album, 13, which releases on June 11th; I may have taken a meandering path to get here, but here I was.

My cell phone was swiftly taken away, and I was a wallflower in the lobby wondering who all these people are and pondering the contrast between the classic Sabbath playing through the speakers and all of the sports paraphernalia lying around. Then the doors opened to the theater, which was tiny, and the crowd of less than 100 wandered in and took a seat. I was third row center. Then it felt like we waited 35 years for it to begin…

Son of Ozzy, Jack Osbourne, walked up to the stage and kicked off the event. We would first watch a little “making of” documentary…which was a great, unexpected introduction to the listening session.

“We don’t write songs you hear on the radio…we write musical pieces.” Ozzy kicked off the short film with this true statement, before we were shown behind the scenes footage and interviews from the 13 recording sessions. I’ll admit that my major hesitation with this album surrounded Rick Rubin’s involvement, and watching him lying in a bed with a microphone headbanging along and giving feedback from wherever this room was made me nervous. And then there was the elephant in the room, the controversial piece marring what could have been a perfect reunion: the absence of The Drummer. Being a huge Rage Against the Machine fan back in the day (I even saw Ozzy and RATM play the same stage as two of my first concerts), I was surprised at the involvement of Brad Wilk in the song crafting as the film would allude to. Just noticed that they have the same initials. Jack gingerly addressed this by saying how the band went back to the very beginning, recording in Birmingham, and left it at that.

Watching them craft the songs in the cozy yet cool room, seeing Tony Iommi’s fingertip prosthetics play these new riffs, and the unspoken connection between he and Geezer Butler as they work, as well as Ozzy’s beloved rambling…it was the perfect hors d’oeuvre to the album. I’ve never attended a listening party before, especially not such an exclusive one as this, and it felt decidedly old school. I sat there with a pen and paper, no one was using any kind of technology…it was nice. And when the album began, it had my full attention. If only I could listen to every album this way, as it was meant to be heard: perfectly calculated audio at high volume from start to finish. 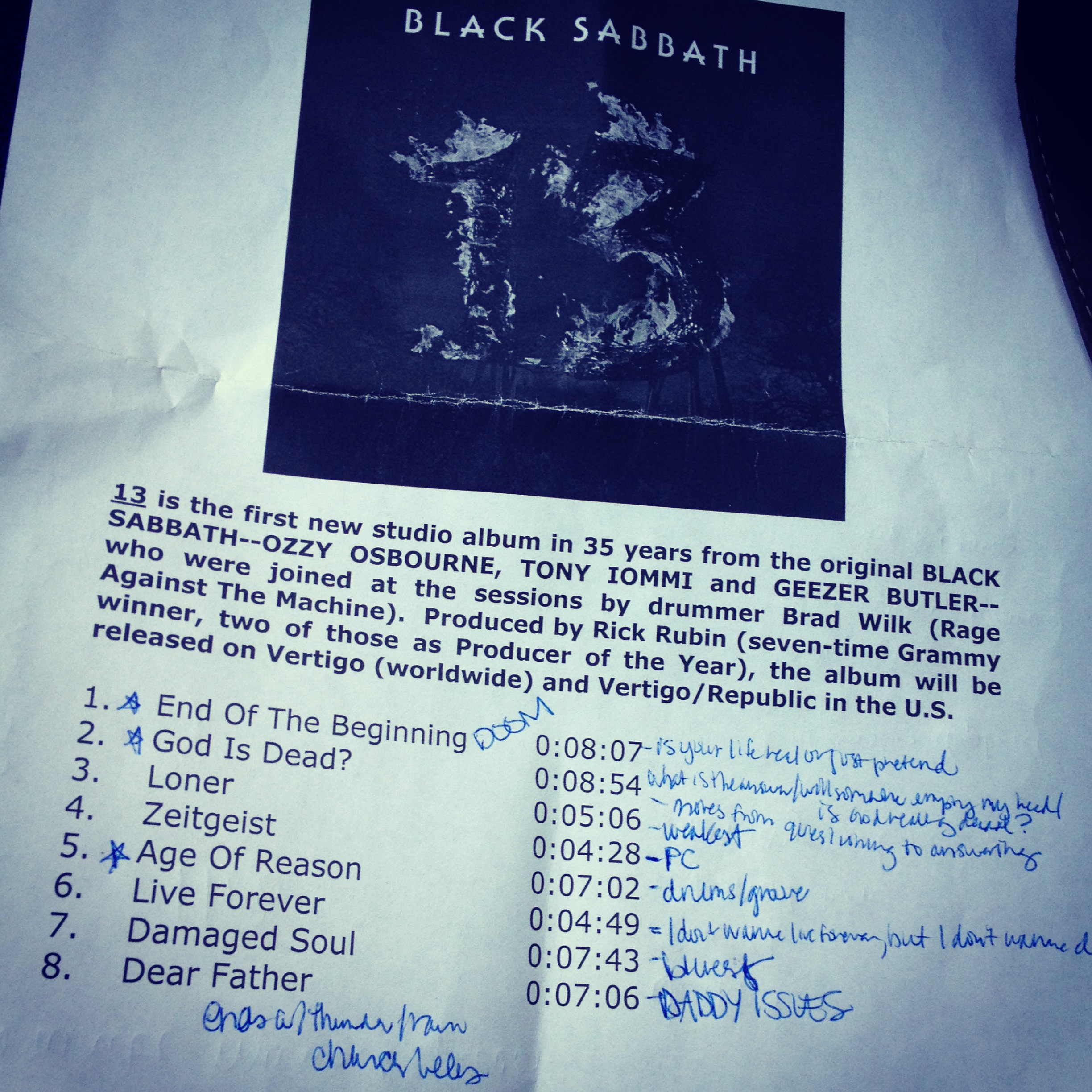 At first I didn’t know where to look- the album cover art was starting to burn a hole in my eyes, so I closed them for a lot of it. I don’t write record reviews- I’m horrible at it- but several things came to my mind as I was listening. My first thought was how interesting it was to hear that classic Black Sabbath sound through the lens of modern production. From the first 10 seconds of “End of the Beginning”, any Sabbath fan will be like, “unholy fuck….they are BACK!” For a band that has influenced the sound, band names, lifestyles, etc. of so many contemporary bands that I listen to, the album as a whole is exactly what any fan would want: they didn’t reinvent the wheel, they are the wheel.

The first two tracks are my favorite: after getting past the played out theme in the aforementioned first track- the doomy, first days of Sabbath sound thrilled me to pieces. It reminded me of the first time I heard “Black Sabbath”: decadently evil sounding in the simplest of ways. The second, and longest track of the album- “God Is Dead?”- established the themes of the album: life, death, and God. What else is there really, especially from a band in their golden years? “What is the answer? Will someone empty my head? Is God really dead?” I liked how the track moved from questioning to answering, like it was recapping the gain of wisdom of a band who’s seen it all.

“Loner” was the weakest track of the album for me, I yawned three times and couldn’t find anything to say about it. “Zeitgeist” is this album’s “Planet Caravan”; it was the mellow track. “Age of Reason” was the other strongest track, starting out very drum-heavy and keeping a solid groove throughout. “I don’t wanna live forever…but I don’t wanna die”; “Live Forever” continues the almost confessional theme. “Damaged Soul” is a bluesy track, and “Dear Father”, the final track, has lyrics that stab, ending with the same thunder and church bells that begin “Black Sabbath”. When I heard that, it was almost like a perfect circle: will these be the last recorded notes- the same that kicked off their first album nearly half a century ago- you will ever hear from this threesome?

Everyone clapped at the album’s end, and Jack appeared back on stage to thank everyone and tell them there was a little surprise. And then out walked Ozzy, Iommi, and Geezer, beaming like proud grandfathers. Had I just listened to the new album….with Black Sabbath?!

The crowd was obviously industry because the excitement didn’t swell too much as I froze in my chair and took it all in. They waved and gave thanks and were whisked off again.

As I left the venue, I passed by Tommy Clufetos.

I can’t wait to have this album in my car.

Once upon a time my ass met Ozzy: 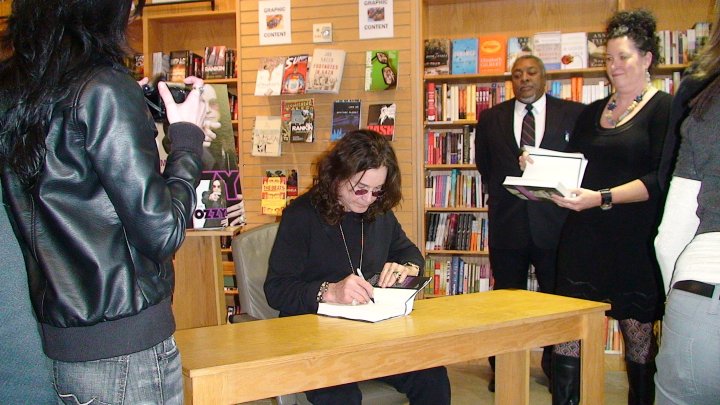 Author HardRockChick 2
It was the first night of The Faint and Ladytron’s two night mini residency at The Fillmore. As co-headliners, each band would take a...
Read More