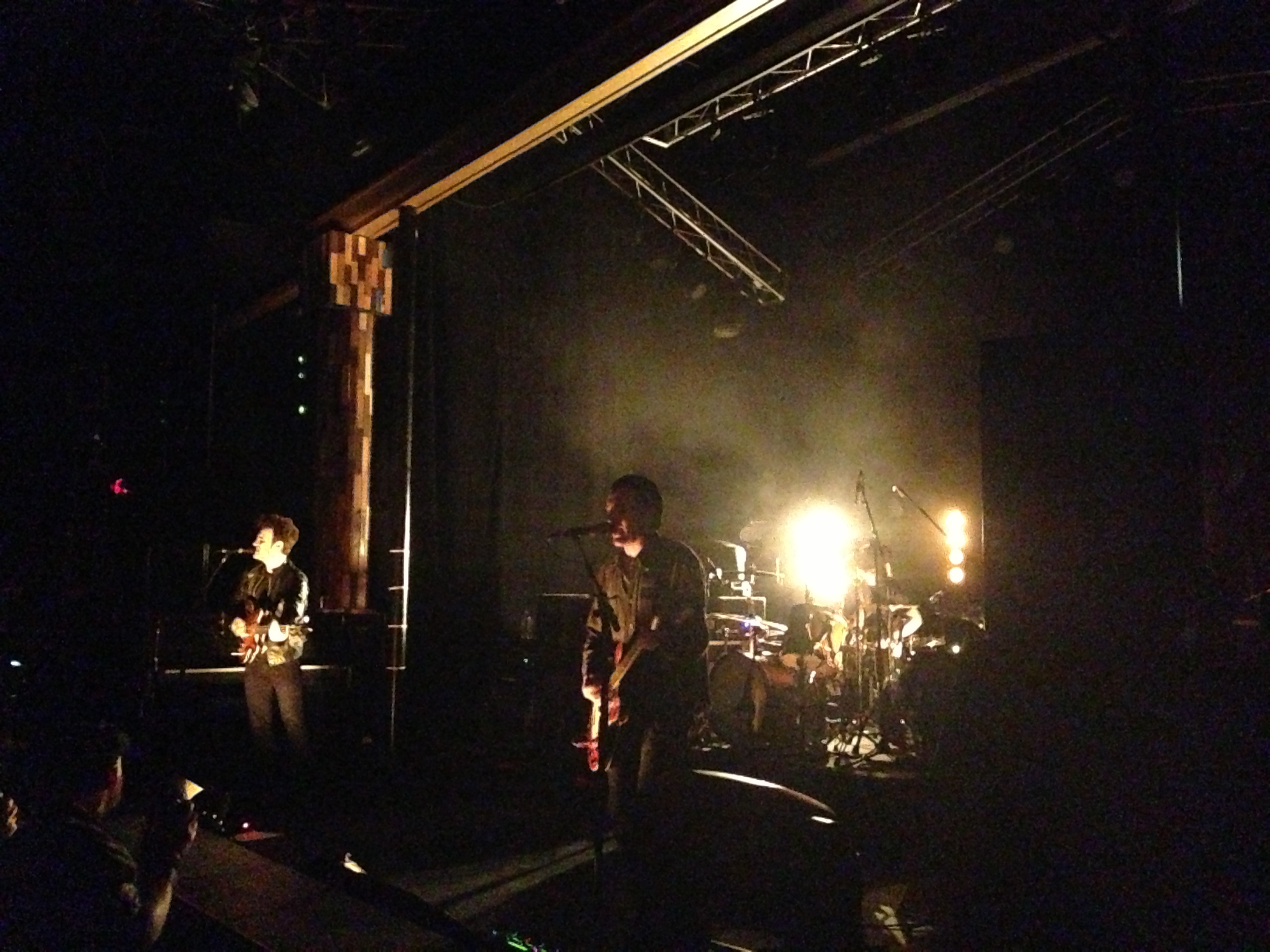 I am living amidst a state of emotional discontent.

This is mostly derived from a self-induced goth summer, where I spend my days and nights immersed in writing about terrible things that happened to me.

And for whatever reason, that means that I have lost my connection with my core music. I’m already living within painful memories, and I can’t listen to things that push me further into that zone. So, instead, I have delved back into the world of electronic music and hip-hop, which is where I escaped to in my early twenties when I needed to walk away from everything I knew.

As I took that long, familiar drive down to Santa Ana, I listened to the hip-hop XM station. I am very out of touch with this world now, but in that hour listen, what I was immediately reminded of was the way that these artists capture the now. I mean…jeez…there is a song called “Molly”….has Ecstasy been so openly talked about since the mid-nineties Party Monster / Keoki era?

So as I stepped into this show, I had this concept cleanly on my mind. Rock & roll produces timeless songs. And Black Rebel Motorcycle Club feel like one of the last pure rock & roll bands to ever exist. 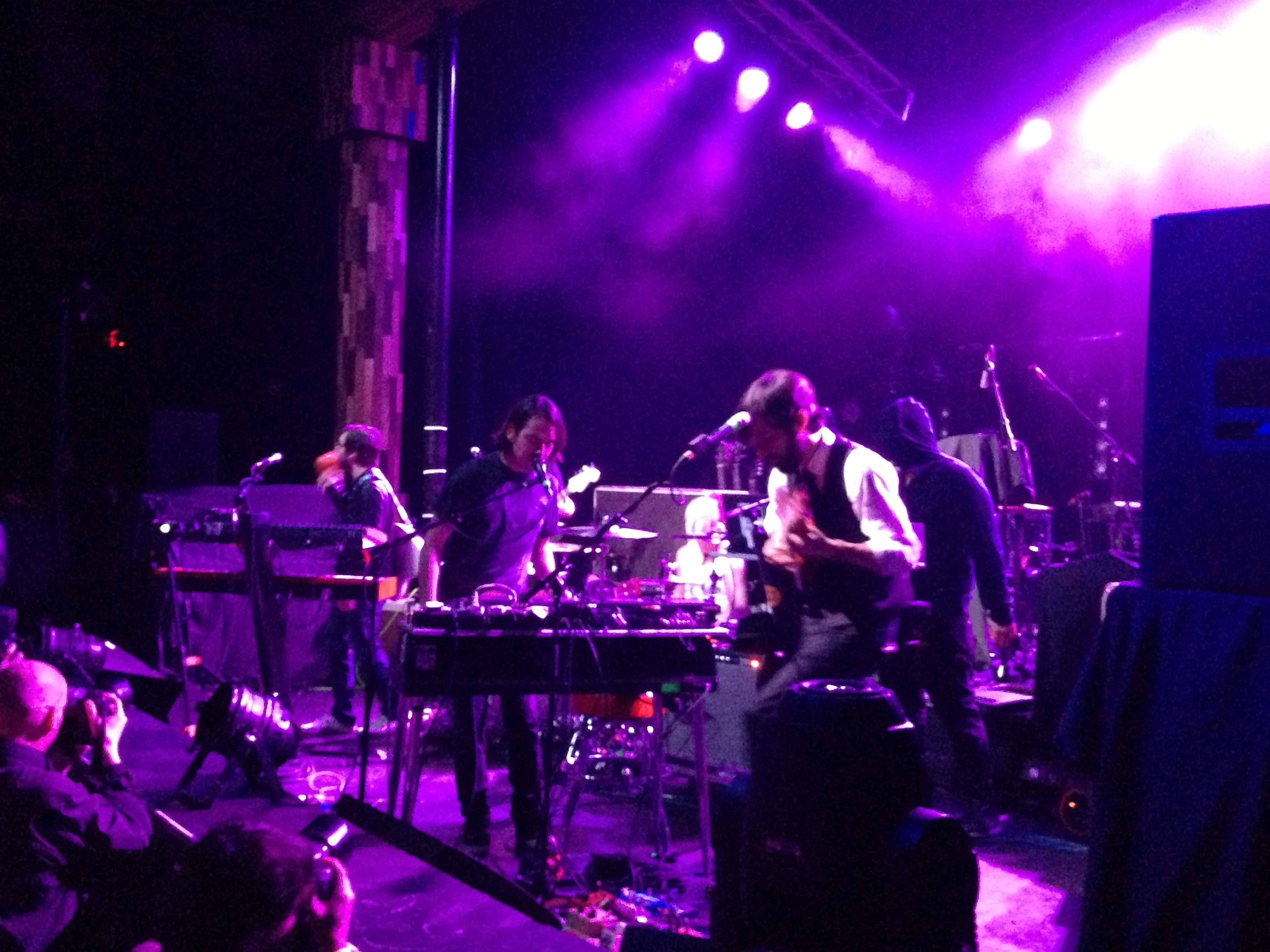 But first, let’s discuss opener Thenewno2. I don’t like the name, but the vibe was very interesting. The first thing anyone will say about this band is that it is led by the offspring of a Beatle: Dhani Harrison. But the second thing they will say is that it is hard to describe. Ultimately, I came out of the set thinking it was highly influenced by Radiohead, Porcupine Tree, and Fischerspooner. That’s a weird combo. There were a lot of players on stage: guitarists, a DJ, ukes, Moogs, a metal drummer, an eBow. With songs and sounds all over the map, what at the beginning of the set felt scattered, came together and felt different by the end.

The temperature in the room rose at least 10 degrees when Black Rebel Motorcycle Club hit the stage. Now that I rarely stand up front anymore, I was able to watch the full band do their thing. I was also able to watch the crowd, which has changed SO MUCH since I first started seeing them (and that wasn’t even at “the beginning”). I never thought there would be a day when I’d miss the slight hipster contingency standing amongst the rock & rollers; now, they have truly reached a mainstream cross-section, as parents and kids, teenagers looking to vent frustration in the pit (they crowdsurfed at one point….REALLY?!), and, generally, normal folks were there en masse. I’m sure that this is the success being reaped from the strange benefit circuit and commercial licensing the band has incorporated into their last few years. Paired with the new album, which is their most mainstream sounding album to date, they have surely planted themselves on the path to upward mobility.

I was thinking about this as the two-hour set began, but was swiftly brought back to the old days when a photographer was quickly reminded that a camera is not to infiltrate guitarist Peter Hayes’ space. A boot to the lens and a glare of the eye, I hadn’t seen that happen in a long time. There really isn’t more that I can say about this band that I haven’t already said in my many past posts about them; the set did their classic shift back and forth from hard to soft, movers & shakers to tissue-dabbers. They offered up a healthy helping of new stuff, but didn’t neglect the old ones, too. Except my favorite, which I recently wrote about in my writing class, to a group of people who were mostly unfamiliar with the band:

We live in a time where everything can be tracked. So when faced with writing about a meaningful song, I turn to last.fm. What is the song I have played the most? While I have listened to NIN three times more than the second band on my most listened to artists list, the song that I have listened to 162 times since tracking in 2008 is Black Rebel Motorcycle Club’s “Red Eyes and Tears”.

What is the perfect rock & roll song? I wax poetic on this frequently, even frustratingly every Grammy season when the rock nominees are announced. A rock song in its purest sense means guitar-driven music, and “Red Eyes” begins there, with it’s slide and stutter like someone running a finger down your spine. There are many times over the years where I have stood right in front of Peter Hayes’ hollow body Gibson, pretending that was happening.

But beyond the guitar, to me the perfect rock & roll song embodies the spirit that the genre has crafted and retained over the decades. That of rebellion, of disatisfaction, and of desire. “Red eyes and tears no more for you my love I fear”. If those words were in a pop song, it would have a happy ending. In a country song, it would dig a deeper hole with further woes and provide no solution. In a rap song, it would seek revenge. But here, in this perfect rock song, it simply feels. Love lost is internalized, “losing sensation for you my love I fear, no more fear, no more fear, I’m in love”.

It’s the kind of song I can swing my hips to, it’s inherently sexual in rhythm. It goes on to further intoxicate the listener; if it were a glass of red wine, you would comment on how full-bodied it tasted and had smoky after notes. The song goes on to include further classic rock & roll tenants, double entendres and thinly veiled undertones of violence. “Losing the reasons to breath I never lived, I’m never filled never filled I’m in love” Is he in love or isn’t he? Is he talking about something that breath-taking or the silencing of life?

“Red eyes and tears no more for you my love I kill” This song strikes a chord with me, it teaches me, it pleases me. Love is my most elusive emotion. I feel like I’ve learned the most about it through the music I listen to, rather than personal experience. And that is probably why my second most listened to song is “The Fragile” by NIN.

Author HardRockChick 0
I guess you could say that it’s somewhat poetic that the week of my return to San Francisco for the last time would be...
Read More
HRC loves NIN My Musical Adventures