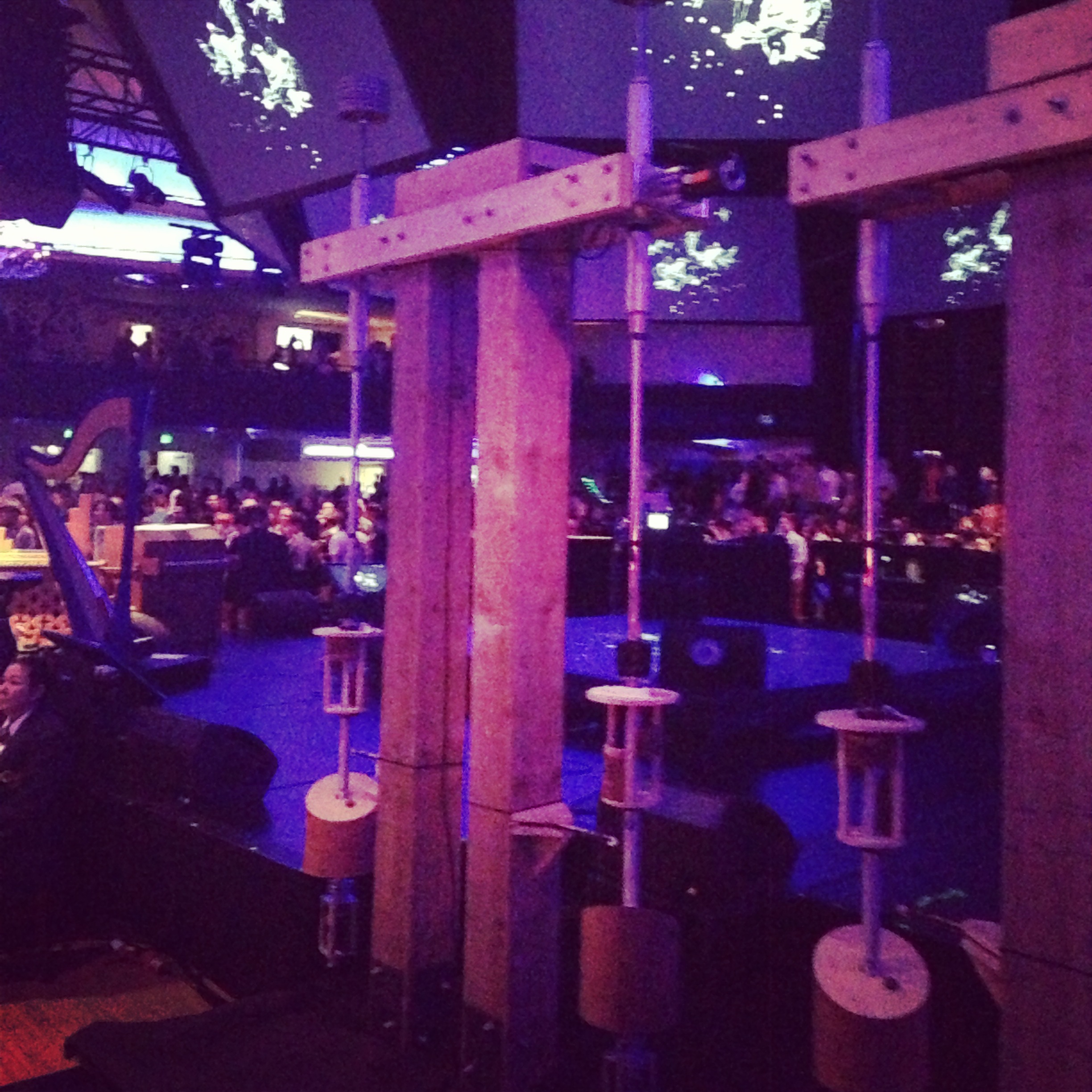 “When your eyes
Pause on the ball
That hangs on the third branch from a star,
You remember why it got dark
And why it is getting light again.
The Earth (like the heart) leans back in it’s seat
And, like that, it travels along an orbit
Drawn in the darkness.
Unpolished pearl In sky-black
Palm of hands
Flickering sun-flame.
You remember
That you are yourself a light-bearer,
Who receives her radiance from others.”

I was waking up from a Faygo-soaked clown-mare into a very real one: the phone call that my mom had cancer. I’m in the midst of writing a memoir about my life over the past three years…and it’s weird for me that the first band I feature in my book is Insane Clown Posse. 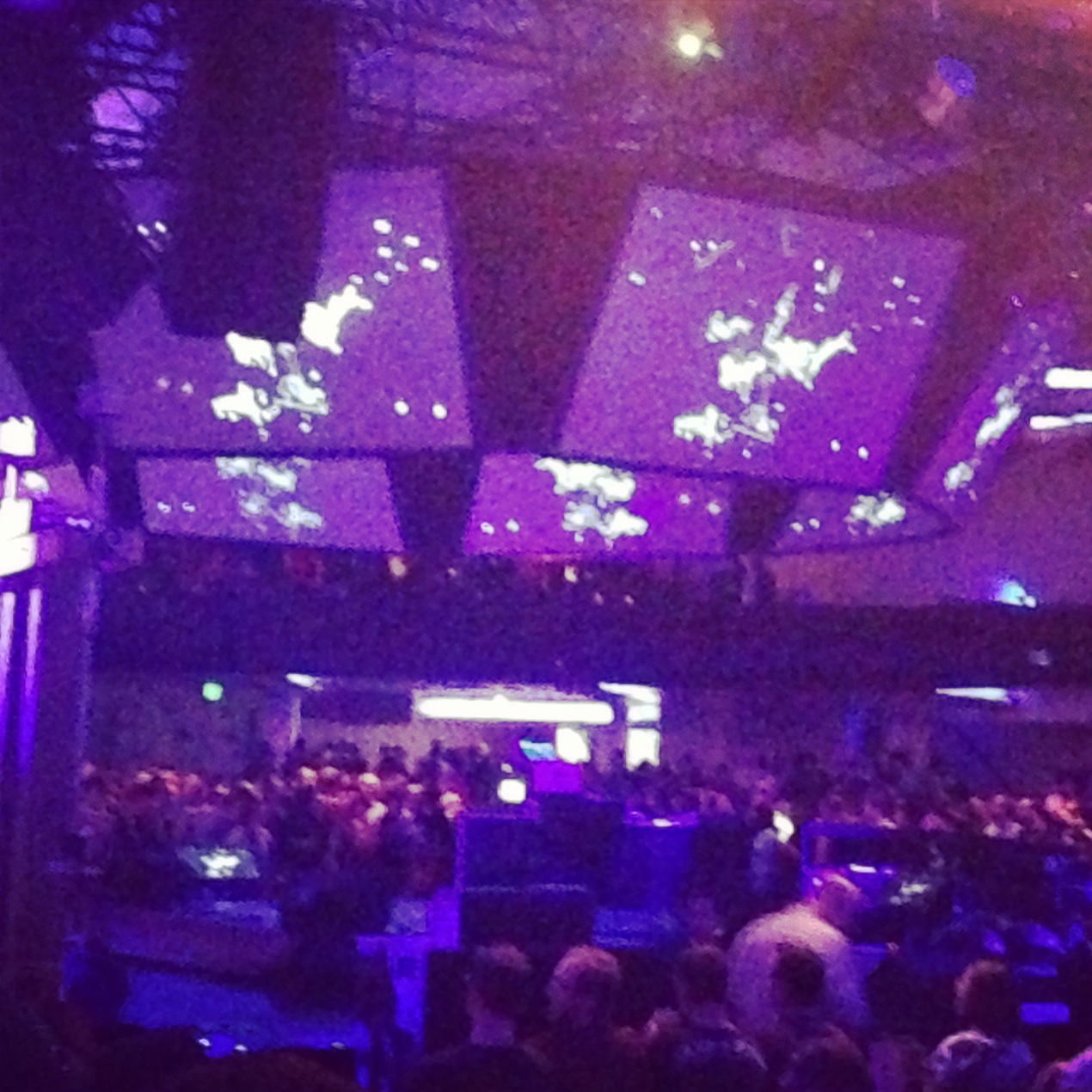 This would be a very different show. BjÃ¶rk is one of the true musician/artists of my generation, and I had never seen her perform. I can remember seeing Sugarcubes videos on MTV as a kid, and then falling in love with “Army of Me”, and even though I didn’t see the movie it was featured in, I bought the soundtrack just for that song. Weren’t those the days, music industry? Then I walked in a fashion show that was set to Homogenic in college…and then I kind of lost track of her except when her weirdness would hit the headlines, or when I saw her in her husband Matthew Barney’s film piece Drawing Restraint. BjÃ¶rk is more than a voice, she is an innovator and explorer.

I decided to dress up for the show, which included these new amber contacts I got that caused my vision to be off…but that made the experience even weirder. To see the Palladium set up for an in-the-round production was strange. I’m a pro concert-ticket buyer, and the setup had me so confused, so I had purchased a GA ticket not realizing this would be behind the seats…but it was still a cool view.

Before the show began, someone came on the stage and told us to not take pictures, since there was a lot of hard work put into the production and they want you to experience it now and not later. Even though I am a live show Instagrammer, I really respect artists that do this; when I take my one or two pics at a show, I do it quickly…I don’t keep my stupid phone out the entire show….so not rock ‘n’ roll. While people who tried were shut down at the begninning, towards the end they crept back in.

Biophilia is the trifecta of science, music, and technology. A blue afro-ed BjÃ¶rk appeared onstage, draped in a cape like superwoman of the superfreaks, with a blonde female choir and various musicians at different corners of the stage handling the harp, percussion, and electronics. The entire set had an electronic current running through it, the bass vibrated all of us consistently. BjÃ¶rk and the choir would slowly shift to face each side of the audience throughout the songs. Screens lined the top perimeter and displayed anything from 3D graphics to nature shots, creating an ambiance that anchored the music. A few songs in, the harp kicked in, and at one point, there was some serious harp shredding going on…which I never thought I’d see. What was one of the finale pieces of the show was a tesla coil, which, oddly enough, I had seen implemented before…in perhaps an even cooler way.

BjÃ¶rk’s voice was so strong I could have listened to it alone. Her accent is also very strong, rolling every ‘r’ with vigor, and after every song, she said what could be construed as “think you”.

When it came time for more familiar songs like “JÃ³ga” and “Pagan Poetry”, the crowd went crazy. People are fanatical for BjÃ¶rk; I can imagine it goes beyond her sometimes inaccessible music, to her caricature. It was great to see women wearing costumes to the show.

The percussionist played what looked like a rubber pod that emitted electronic drum sounds at one point. There were also giant wooden pendulums which started moving towards the end, but appeared to have no musical purpose.

The encore was basically like a high class rave: multi-colored, bass-lit, body-moving wildness. It was quite the finisher.

Glad to be able to check BjÃ¶rk off my must-see list, I rushed out in anticipation of listening to the new NIN track which had leaked during the show, causing my phone to explode.

The BjÃ¶rk video that most closely resembles my life:

Author HardRockChick 0
Before going back out again, my mom took me to a nice dinner since I had been so busy that I hadn’t eaten much...
Read More
My Musical Adventures