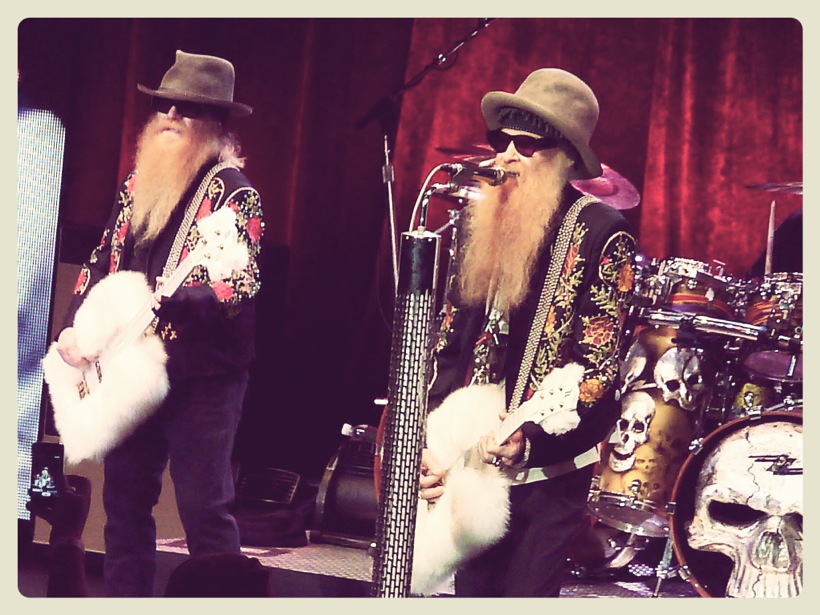 I wrote about this show for GRAMMY.com…but a few points in addition:

A paragraph deleted in editing:

At one point, guitarist Billy Gibbons addressed the crowd about their jackets, saying that they were going to wear FFA jackets- ‘Future Farmers of America’- for the occasion, which generally have the wearer’s hometown on the back. But whoever made them put Hollywood, CA on there, and he thought….”there’s no farmers in Hollywood”…as he got a wry smile on his face and pulled out a joint which appeared to be wrapped in money from his pocket and stuck it in his mouth. The crowd was in stitches.

Also, ZZ Top is essentially the only good rock ‘n’ roll story between my two parents. Before I even went to my first real concert, I was obsessed with live music. To me it was the coolest cultural event and artistic endeavor out there. Too bad my “calling” wasn’t medicine or law or something more productive. I read so much about Monterey Pop and Woodstock that I just thought that everyone in their late teens/early twenties in the late ’60s- like my parents- went to them. I mean, why wouldn’t you?! I was really let down when I found out they hadn’t…in fact, they didn’t really go to any concerts in that era…the era I would have most liked to live in.

My dad went to school with the guy that famously sang “Raindrops Keep Fallin’ on My Head” and saw Roy Orbison play some tiny dive in East Texas, but it was my mom that won with her ZZ Top story. She dated their road manager in the very beginning of ZZ Top, a guy who performed guitar on a song on Rio Grande Mud and, I just found out, a decade and a half after they dated was featured in the “Sharp Dressed Man” video. The only real story she told me was about how she went to a show and got to meet Bo Diddley and Chuck Berry backstage….and didn’t know who they were. I think that statement alone was enough to shut me down from asking any more questions, but she was also kind of resistant to talking about it.

Unfortunately, I can’t ask my mom for more stories about this now, so I turned to the internet before going to this show. Through some sleuthing, I magically pieced together what I think my mom’s story was with ZZ Top:

From this site, which features extensive tour history of the band:

My mom would have been a drop-dead gorgeous senior in highschool, and she worked at Joske’s. I can almost see it: band plays a free show for the opening of this store– which in and of itself blows my mind- ZZ Top played the grand opening of a fancy department show in the ‘burbs of Houston?! Someone with the band sees my mom and next thing you know….she’s at the Houston Music Theater, the scene of the Diddley/Berry incident.

Author HardRockChick 5
Beyond the fact that I’ve burned out almost every person I know on accompanying me to see live music, offering up a band called...
Read More
My Musical Adventures

Author HardRockChick 1
I was driving back to Austin for the third time this week, replaying a conversation in my head. Today was the day I realized...
Read More