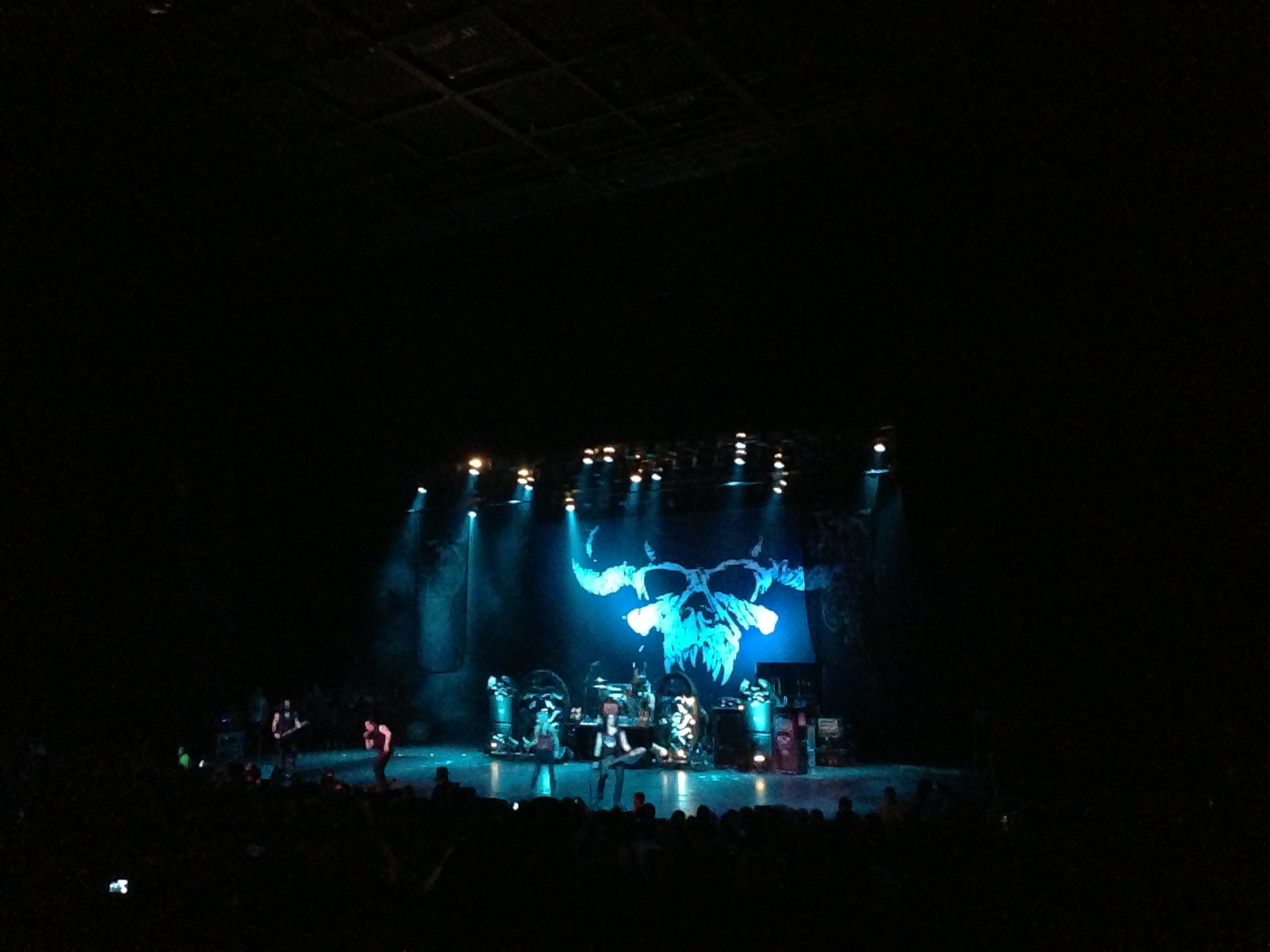 I had spent the last week in the crystal blue waters and vibrant green rainforests of Hawaii, and less than 24 hours after returning to the mainland, I was back in the rock womb…my other version of paradise.

This would be the last rock show at the historic Gibson Amphitheater before it is torn down to become a Harry Potter ride. I know nothing about Harry Potter. It makes me sad whenever a historic venue closes, especially one where I saw Neal Peart drum, cried during A Perfect Circle, saw the glistening Phil Collen, and Papa Emeritus blew me a kiss. I’m sure the space will now be cherished even more as a forgettable ride about kids that go to magic school….yeah…

While I missed Huntress and Cherie Currie, I did catch Scar the Martyr, a new project by Slipknot drummer Joey Jordison. While aspects of the music harken mid to late ’90s groove and gothic metal, it often goes into territories that make it difficult to classify. This is particularly due to the vocals, as Henry Derek transitions from clean to scream in unexpected ways. The music did not show off Jordison’s drumming prowess as much as I expected, which is ultimately a good thing for the flow of the music. Chris Vrenna collaborated with them on their upcoming record, furthering the industrial overlay to the feeling of this band.

The room felt like it was bursting at the seams by the time Danzig took the stage. “This is my favorite place to play in LA” Glenn Danzig told the crowd, as, a couple songs in, he launched into “Twist of Cain”. The crowd couldn’t not sing every word, as these high school anthems were reanimated for the last time in that space. I had only seen Danzig once before, and the fact that he kept having security drag people out who were taking pictures with cell phones took prevalence over any other aspect of that show. This time around, it felt like it was supposed to: a rowdy, raucous rock show.

When Danzig talked about how they didn’t sound like what was popular in the ’90s, how people told them they wouldn’t make it, I was struck with a flashback to when I first heard them. I was sitting in the back of a much older friend’s Mustang at a Sonic Drive In, when “Mother” came on the radio, probably in 1995. We thought the song was super annoying, someone probably said, “Let’s listen to some fuckin’ Pantera!!!” and that will tell you where my musical head was in the mid ’90s. It wasn’t until much later that I gave Danzig a chance again.

Lighters went up for “Blood and Tears”, and I watched several guys around me get sentimental. Then Cherie Currie came out to perform the song that she and Danzig recorded together for their latest release, a cover of “Some Velvet Morning”. A Misfit and a Runaway…it wasn’t the most well received moment in the show, but I did kinda trip out on the fact that I’ve seen 3/5 of The Runaways over the past year.

The moody melancholy of the Danzig songs in the middle of the set were interrupted as the “monster-man” Doyle stomped out on stage for The Misfits portion of the set. That’s when it got wild. The sound of everyone singing along nearly drowned out the music at times. The pit got going to a point where it looked like the place might get preemptively torn down. This was the definite highlight of the night. To watch the menacing presence of Doyle, the all-consuming back-up vocals the crowd provided to overshadow Danzig, and the childlike excitement of everyone in the room, the place was transformed into an energetic punk show.

The set wrapped up with that once annoying “Mother” song, and “She Rides”, which might be my favorite. And then, to end on a high note, Doyle stomped back out to finish the set with Misfits songs.

And the rest of the night ended strong, as Gibson shows always have…err, HAD…the best VIP action. Luckily I’m a responsible adult and didn’t wake up in Phoenix.

Author HardRockChick 0
Tonight made twice in one week that I tested out new venues in SF. And let me tell you, Hotel Utah is an odd...
Read More

Author HardRockChick 4
Weak and powerless, I pull up to valet the Challenger in front of the venue. One too many champagne cocktails the night before, a...
Read More
My Musical Adventures

Author HardRockChick 2
As I get deeper and deeper into making HardRockChick a legitimate website, building up my own credibility as a writer that bestows music insights...
Read More
My Musical Adventures

Author HardRockChick 2
In a rare occasion of perfect timing for me, I take my spot at The Warfield just as Serj Tankian takes the stage. I...
Read More