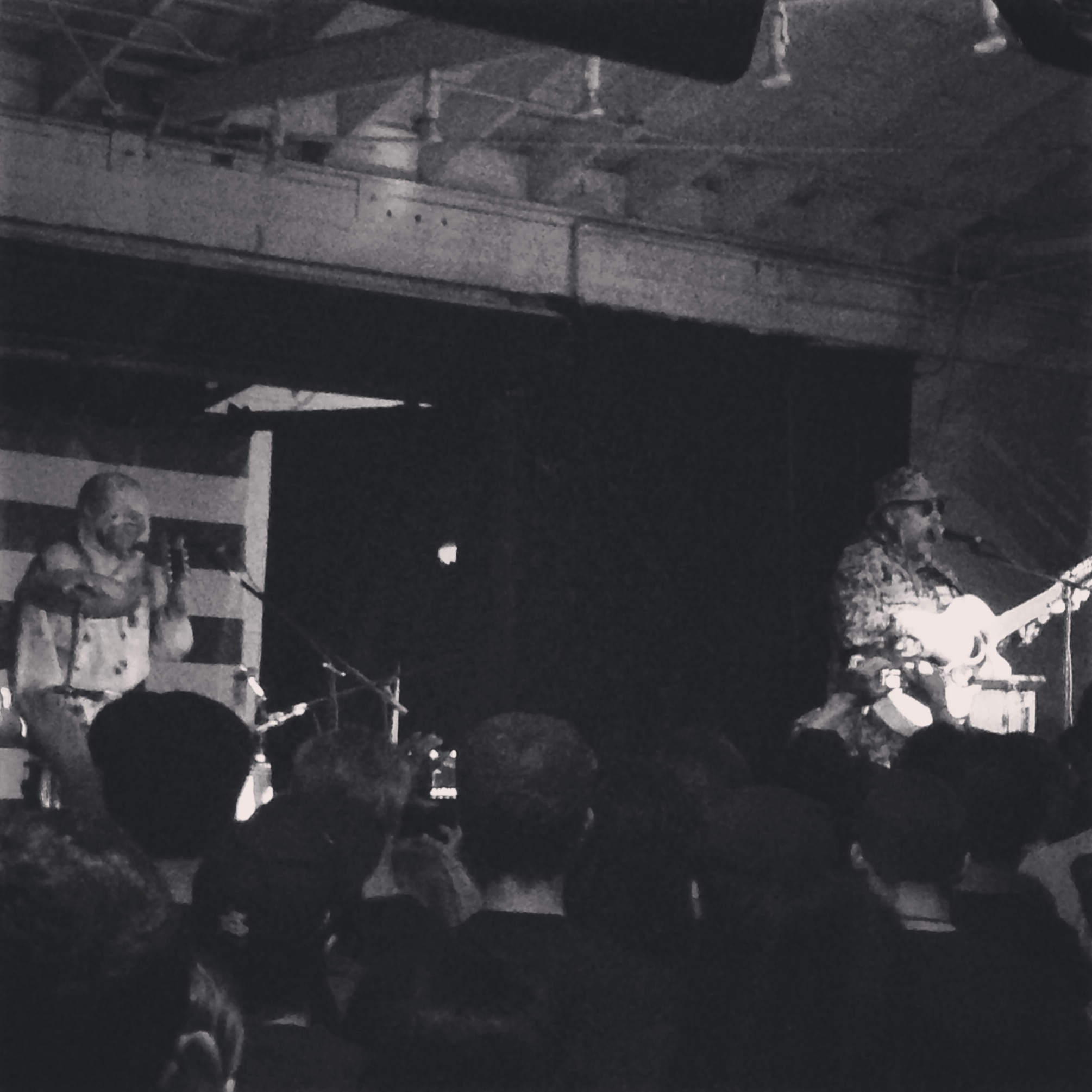 It had been a while since I had made the voyage eastward to the dingy but somewhat charming Vex. As the giant face that adorns the front of the venue came into view, so did the long line of people.

It had also been a while since I’d been to a goth show, and walking past all of the sad souls draped in black to get to the end of the line made me realize that I kind of missed this scene. It took over half an hour to get into the venue, and once inside I got felt up by security for the second time in a little over a week. Is that really necessary? I’ve seen Suffocation…Absu…loads of other extreme metal bands here, but apparently the controversial legacy of Death in June made for one of the tightest security checks I’ve ever encountered.

Once inside, Peter Murphy and Nivek Ogre crooned to us as we stared at the stage with the minimal setup and flag adorned backdrop. It was rather warm inside the warehouse, and everyone seemed antsy. A mixture of the time it took to get inside, the fact that you couldn’t get a drink without waiting in a line that would have taken another huge chunk of time, and the fact that this was probably most of the people in that room’s first time to see DIJ made for a palpable anxious energy.

As the music and the lights dimmed, two figures appeared on stage wearing stone-faced masks, and began a hypnotic series of drum beats and chimes. It served as a call to action for the contingency of the audience wearing full military regalia; as these men in uniform pushed passed those of us drenched in black, it created an eerie atmosphere of a power rift.

Between the unmoving faces and the lulling beat, I was put into a trance that would inflict me off and on during this set. It wasn’t until Douglas P. took off the mask and picked up the guitar that I snapped into ‘show mode’.

The room smelled musty and vaguely of mothballs, like we had all been taken out of a trunk that we’d long been resting in. 10 or so songs in now, he asks for requests. That would set the crowd off, as they shouted titles in gruff voices between songs from there on out. It was vaguely rally-esque.

As the set further unfolded, the bare sound was sometimes plagued by a loud hum that distracted me. I longed for this show to have been somewhere else; but there was something about the seedy, industrial wasteland energy of the Vex that was absolutely appropriate.

Post-punk, post-industrial, neofolk ballads of mass destruction spun a web over the crowd, and these old familiar songs of death were given new life. Was something ugly made beautiful or something beautiful made ugly? The real draw lies in the transition, the metamorphosis, the repositioning in our brains.

As the nearly two hour show ended, it took me a while to snap out of the trance. As we crossed the road to my car, we were caught in the fast approaching headlights of…a hearse. I’ll be goth til I die.