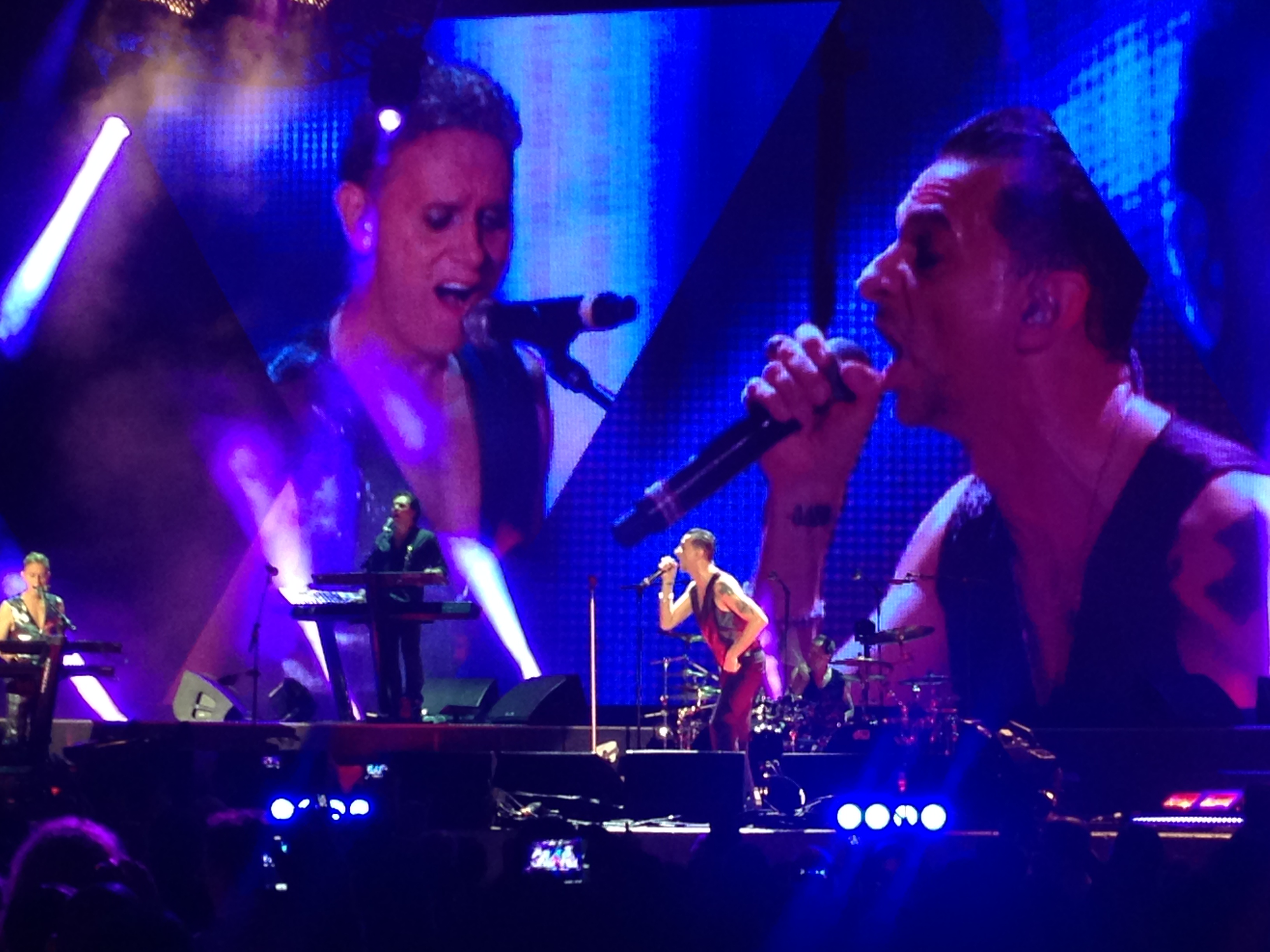 I have always been a dancer. From ballet classes to jazz and tap, sock hops to proms, nightclubs to raves; one band has always been there somewhere on the playlist: Depeche Mode.

There was a cool breeze as the sun went down on us at the Sleep Train Amphitheater in Chula Vista the day after the fall equinox. Opener Crystal Castles began in the light and ended in the darkness, their dancey darkbeats with videogame sound motifs providing the perfect soundtrack.

The show was sold out, and a glance at the crowd could attest for the wide appeal of Depeche Mode. A band that has consistently created music that bridges the gap between dark and light, and hard and soft, it would be impossible to categorize and define them. The light went out and bass pulsated as the band walked on the stage, launching into the first two tracks- “Welcome to My World” and “Angel”- off their latest album Delta Machine. Led by Dave Gahan- a man with the golden voice of Leonard Cohen and the whirling dervish moves of Michael Jackson for the alternative sect- I was immediately taken into their world. Perhaps no other band has so well-articulated music about lust, sex, and darkness that makes you want to move like Depeche Mode has.

Gahan struts around the stage for “Walking in My Shoes”, preaching to us. A large screen behind the band assists in setting the mood and telling the story with vibrant and bold video pieces for each song, mixed with a live feed of the band, created by Anton Corbijn. For “Precious”, the song took on new meaning as a series of beautiful dogs were shown, their sad eyes reflecting the lyrics.

“Black Celebration” featured UFO-esque light panels descending from the ceiling, as Gahan tantalized the women in the crowd with moves worthy of Chippendale’s, and my friend rightly squealed in my ear. “Policy of Truth” set me straight into my favorite DM album- Violator. One of my highlights was “Barrel of a Gun”, where Martin Gore’s atypical guitar skills shine, as he plays a star guitar. This is something that years of listening never quite revealed to me; it wasn’t until I saw them live that I understood where some of those iconic sounds truly came from.

“But Not Tonight” was the first of a few songs where Gore sang and played solo while the rest of the band took a break. Dressed in what could best be described as glitter grunge- shiny plaid pants and a silver vest- he looked like a raver cherub as all eyes focused on him. New track “Heaven” is such a beautiful and emotional song, showing the band’s evolution and maturation perfectly, still transporting us to that same warm, dark place in our souls, but perhaps with a different vehicle than they did back in the eighties.

The way that they give “Personal Jesus” a slow, acoustic start before bringing everyone’s favorite dark, dingy danceclub track up to normal tempo breathes new life into the song. Everyone participates with arms outstretched to “reach out and touch faith”. A remixed version of “Halo” dominated the encore, before the final two songs served as the cherry on top of the icing on the already delicious cake. “I Feel You”‘s grinding rhythm was what first drew me into DM, and in a live setting it infects just as it did the first time I heard it. But “Never Let Me Down” is probably my favorite DM song, a track whose words have always spoken to me. And as the velvet voice, hypnotic beats, and sensual synths played their final song, we had our last dance before heading back into the real world.

“Welcome to My World”
“Angel”
“Walking in My Shoes”
“Precious”
“Black Celebration”
“Policy of Truth”
“Should Be Higher”
“Barrel of a Gun”
“The Child Inside”
“But Not Tonight” (Acoustic; Sung by Martin)
“Heaven”
“Soothe My Soul”
“A Pain That I’m Used To” (‘Jacques Lu Cont’s Remix’ version)
“A Question of Time”
“Enjoy the Silence”
“Personal Jesus”