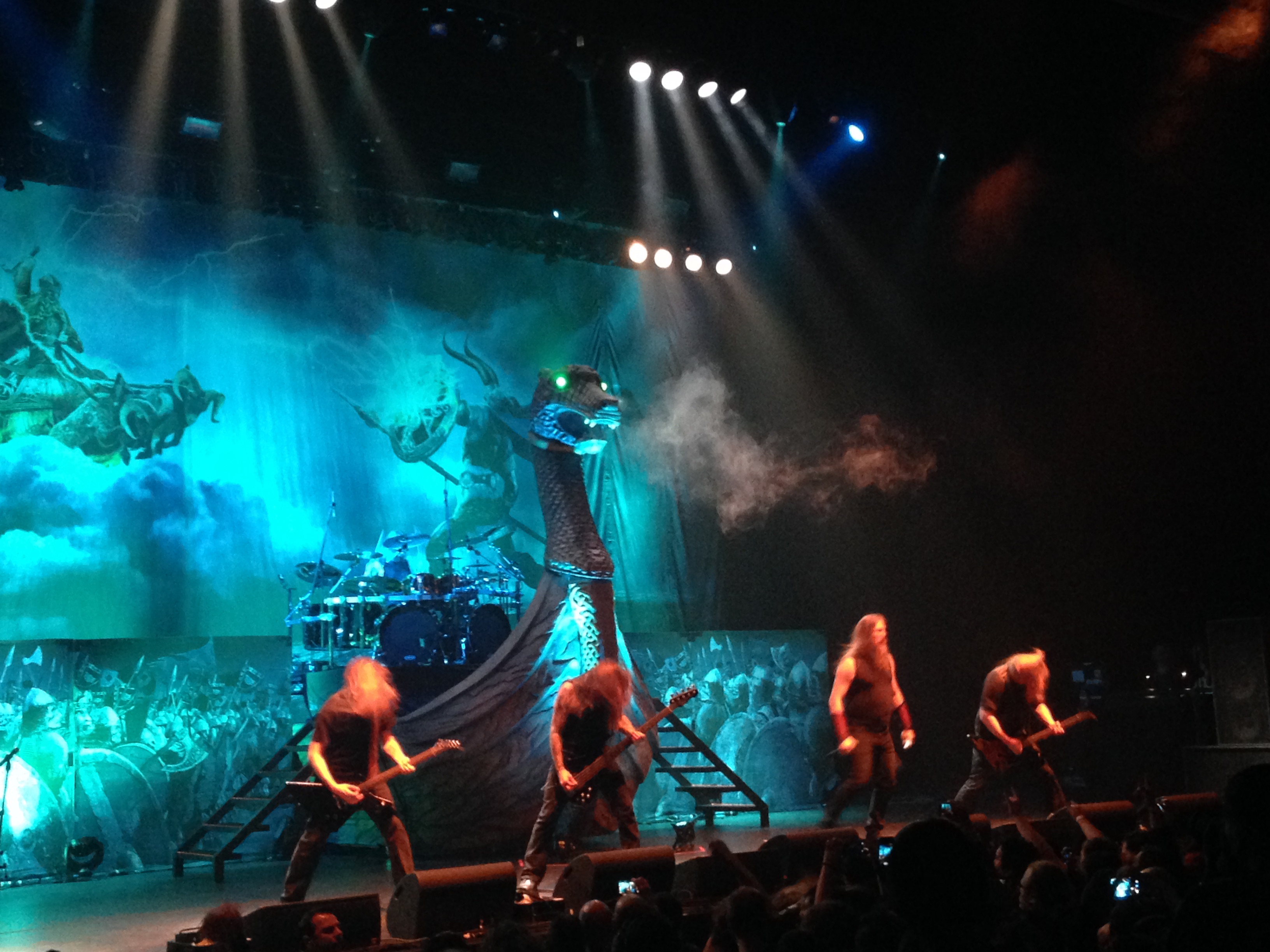 ~”Death in the Eyes of Dawn”, Enslaved

The classic marquee lit up the street, beckoning us to enter, but, alas, it was an hour after doors were supposed to have opened and they remained shut. Â I began the quest for the end of the line…wrapping around the block to an almost comical length. Â Who was invading who? 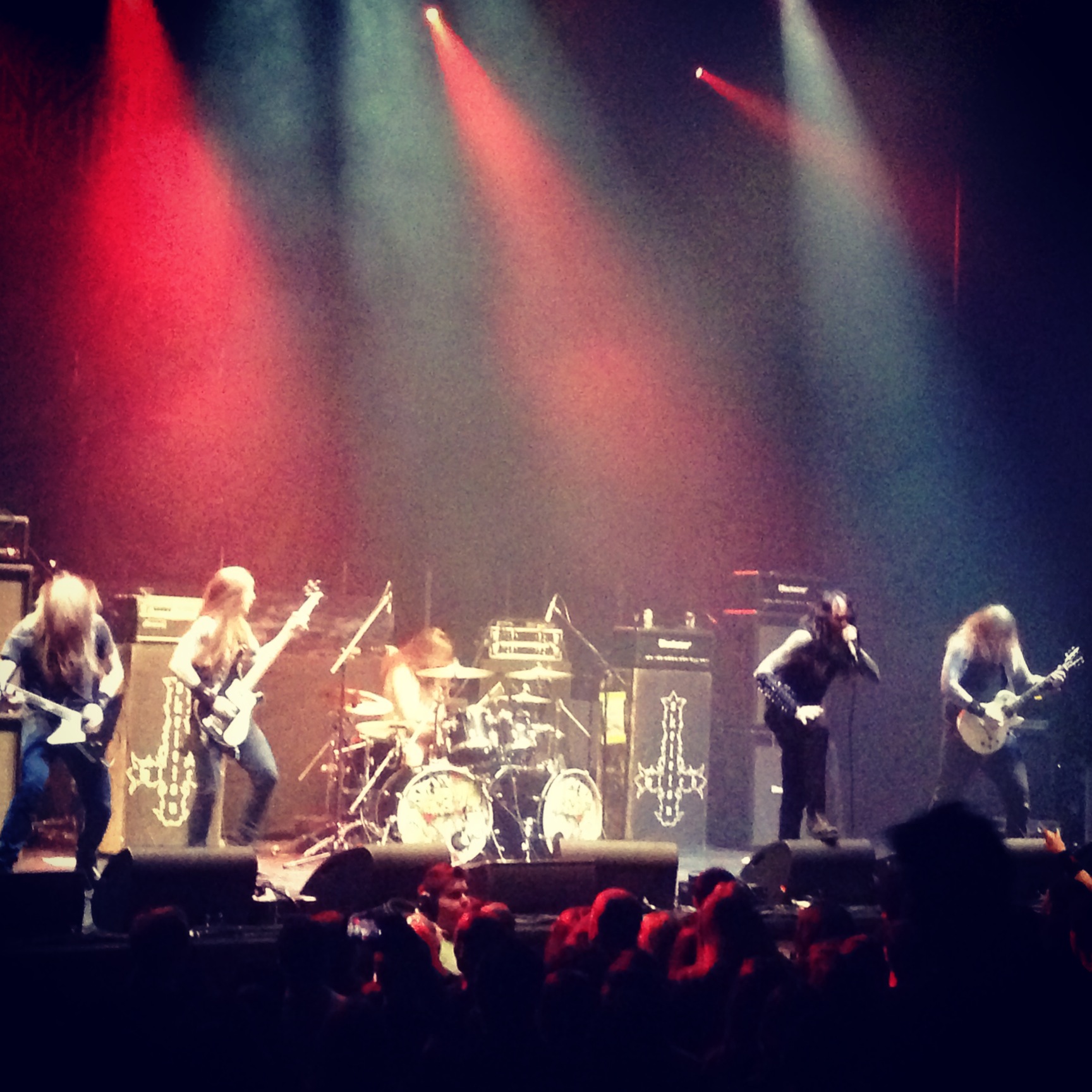 The Viking food truck parked on the block was a nice touch- though I’m pretty sure they weren’t serving porridge or pickled herring. Â Once inside the art deco interior of what is probably my least favorite venue in LA (the limited pit thing is incredibly annoying, and the sound never seems right); I perched on the first tier to watch the blonde guitarist symmetry and gauntletedÂ snarls that is Skeletonwitch. Â Once upon a time, my friends and I dressed up as skeletons and called ourselves ‘skeletonbitches’ when the band played a near Halloween show. Â That was fun. Â The ‘witch’s over-the-top demeanor served as a perfect opener; in fact, I think I preferred them as an opener than as a headliner. Â Blackened thrash metal has been one of the genres to evaporate from my playlists as of late; that said, they are fun, and the sold out crowd ate it up. Â Especially when Enslaved, donning Raggedy Ann type wigs, infiltrated their stage as an end of tour prank. 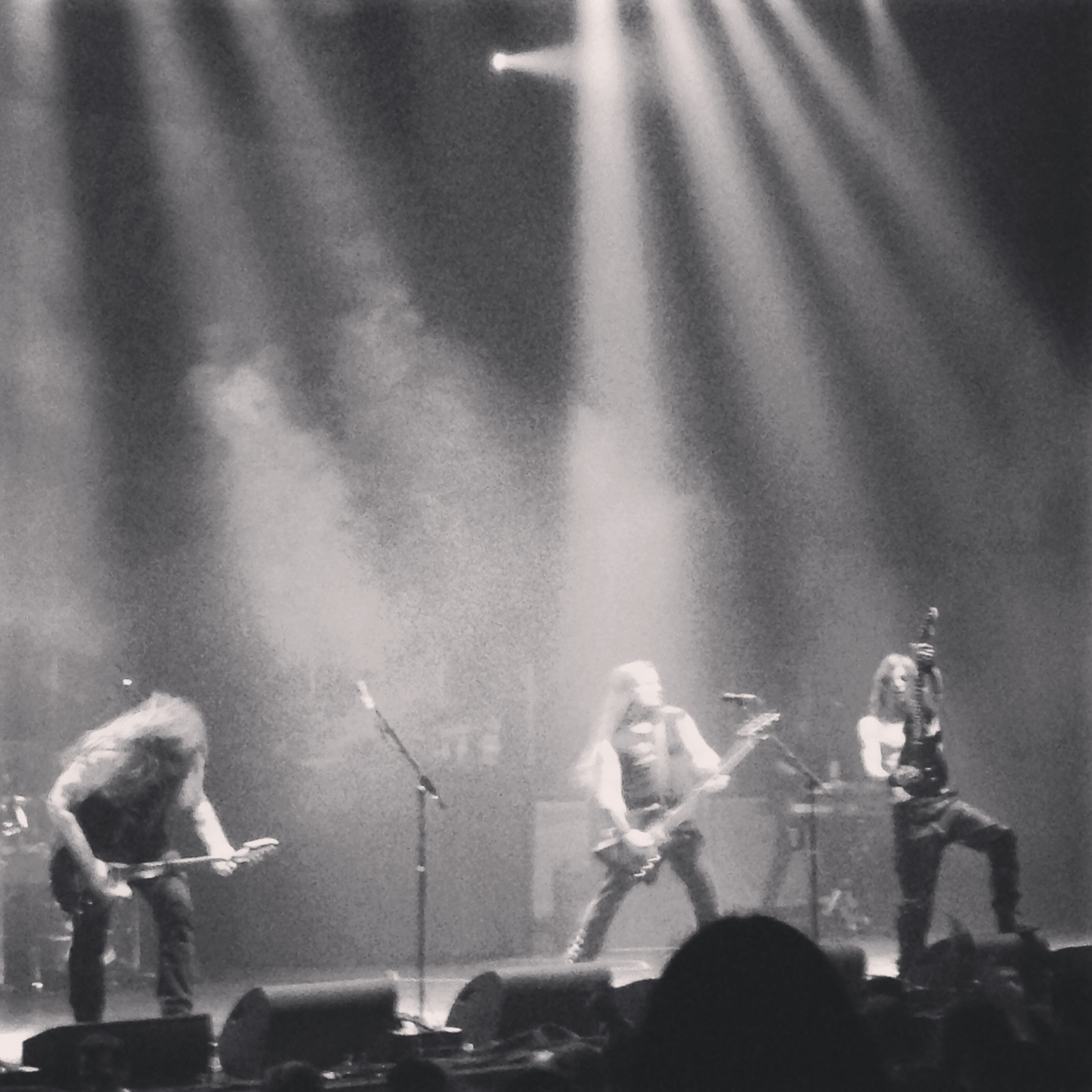 It took me years of listening to Enslaved to ‘get it’, and they have become one of my favorites. Â Progressive black metal is an odd genre, and it’s not for everyone, but Enslaved serve it up in a way that they can pull in everyone from the Opeth snobs (hey- I’m kinda one of them) to the Amon Amarth grunts (hey- I’m one of those, too). Â Every album of theirs takes me on a journey; it’s so intricate, dark, and dreamy, painting a masterpiece inside my head. Â  I traveled to Norway to further understand where bands like Enslaved come from, and yet they still possess a magic to me and probably always will. Â While I will probably never experience as brilliant a set as I did when they played the pool deck of Barge to Hell late at night, and I cried during “Materal”Â (I’m a wimp), this set was a nice reminder of how solid this band is. Â Starting with “Death in the Eyes of Dawn”, which is the perfect case study of how they masterfully combine beautiful music with the harshest of vocals, I watched people out of the corner of my eye trying to understand what they were seeing, watching them slowly won over. Â Onto “Ethica Odini”, a triumphant display of prowess, the gruff and clean vocals circling each other like animals about to pounce. Â The title track from their latest album, RIITIIR, is filled with lament, and came on the heels of members of Amon Amarth bringing shots on stage, in shotgun shell-like containers in a bandoleer worn by Johan Hegg! Â “Isa” finished the set, one of the first songs I heard from Enslaved. Â I was just getting into it when the set ended.

Even though I had seen their Mayhem Fest set that included the Viking ship, it didn’t dampen my excitement when the curtains parted and the eyes of the dragon at the front of the ship lit up and smoke blew out it’s nostrils. Â Such pageantry in metal keeps me interested. Â AA are a fun band with chops behind it; it was particularly fun to see all of the people dressed for the occasion- valkyries, vikings, and some things in between. Â The Wiltern erupted in a drunken, beer-clinking good time…which means that a secondary pit opened up on the first tier, and even though I know to stay away from this section now, I could hear the thuds of unfortunate crowd surfers hitting the floor at times. Ouch. They played a lot of their latest album towards the beginning of their set, which I am not as familiar with… but I basked in the comfort of the ‘classics’. Â Hegg, always the jovial frontman, burped as he spoke, supporting his character. Â The thrill of the stage setup, the synchronized windmills, the way that they are kinda Dethklok personified (though when I interviewed the drummer, he had never heard of them…), these are the things that always bring me out to see the vikings.

Author HardRockChick 5
On what would have been Johnny Cash’s 78th birthday, Black Rebel Motorcycle Club kicked off their tour in Sacramento, sharing new songs from their...
Read More
My Musical Adventures