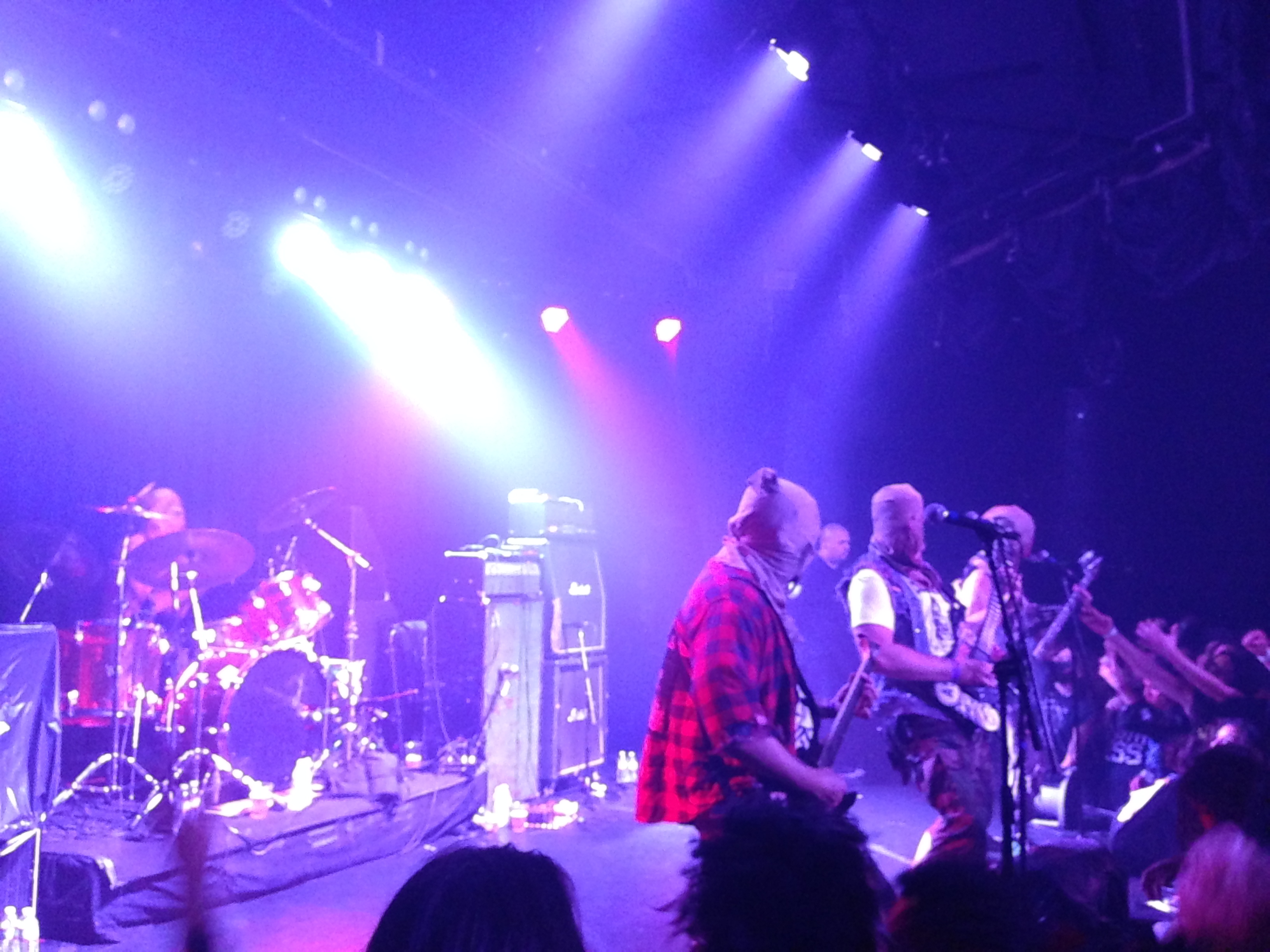 Ugh, uber driver… please STOP TALKING TO ME! I am paying you to drive not to chat. So I took the opportunity to silence her by saying I am going to see some gory death metal and FINALLY she stops talking. Works every time 🙂 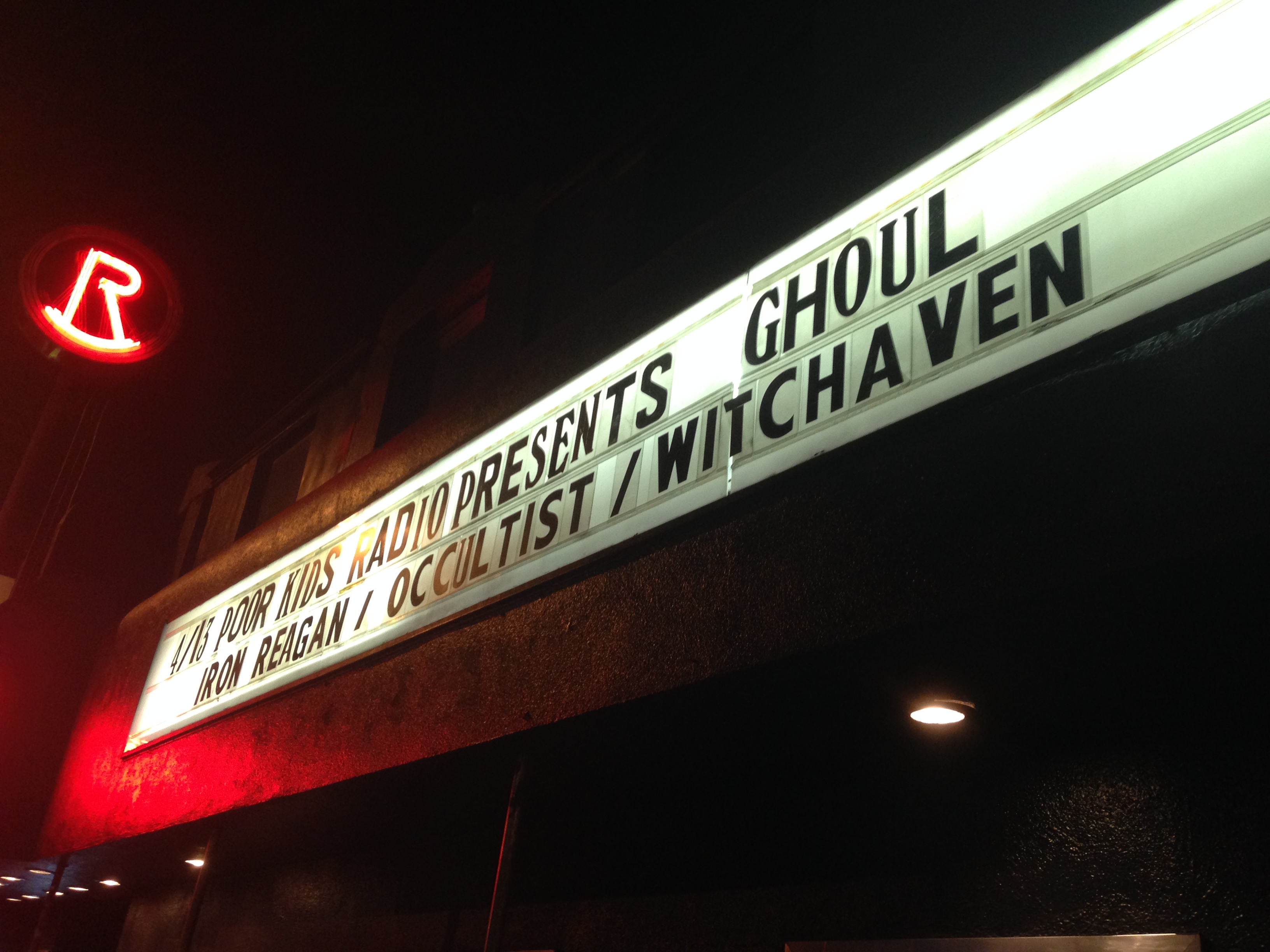 As I approached The Roxy I saw tons of rough looking characters swaying around the premises; The Rainbow was having a parking lot party and as you can imagine, in hour 9 of this it did not look pretty. I waited in will call and the guy in front of me turned around and proudly stated “I got you in for free as my +1!” and I’m all like “thanks man, but I’m already on a list!”. “Oh…” Why does this never happen to me when I really need it to?!

I was curious how this show would go down at The Roxy; I’ve seen plenty of metal shows there, but never something so….uhhh…. theatrical. The place was quickly filling with a cross section of punks and metalheads, who looked like they had had a looooong day next door. I stood behind a couple where the guy was lovingly fixing his gal’s mohawk as the curtain rose. 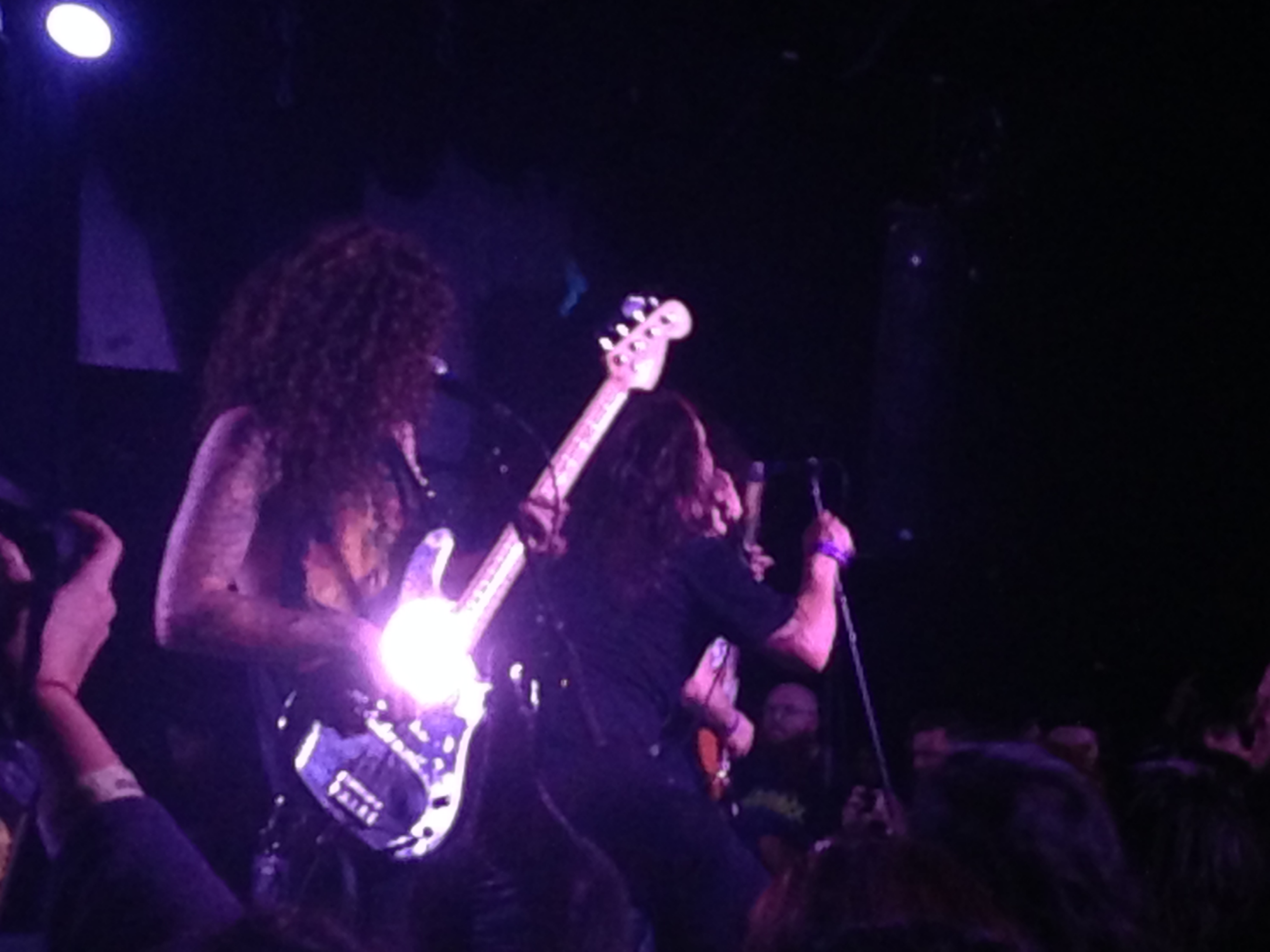 Iron Reagan emerged onto the stage. Sure, the easiest thing to say here is something about how it features 2 members of Municipal Waste, and, yes, they sound like the band’s older, jaded, more cleverly hilarious brother. With songs that average about a minute and a half, this furious fivesome rifled through songs as quickly as the went through jokes, and, perhaps surprisingly, emotions. One of my favorite things about frontman Tony Foresta is how, amidst spewing songs, he spouts wisdom. Tonight he went on about how “Walking Out” is about what all of them, and perhaps all of us, have/should done/do…leave your shitty job to do something that you love. Luckily I have found a way to do both, but I know firsthand how much most of the people in these bands we go to see sacrifice to bring you 30 minutes of entertainment every 9-12 months. At the expense of even a livable wage, perhaps the people behind our music are more authentic now than they have been in decades past. This message brought to you by the purveyors of Sensual Thrashâ„¢.

As soon as Ghoul‘s set began, I could not stop thinking about GWAR’s David Brockie. Watching Ghoul is like seeing Oderus Orungus’ sons perform. The crowd went absolutely bonkers and security had their hands full with stage divers. Popes, cops, robots, monsters, dead babies… these are the extra members of Ghoul, and the crowd became part of a slasher film. There were 3 highlights of this set: 1) A fanatic jumped on stage and was trying to convey something to one of the guys, and was subsequently detached from the band member and ejected from the stage. However, he continued to babble about his love, and one of the members just came over to him bent down and screams “I KNOW!” in his face and walked back to his post. 2) Baby killing banter ensues, member turns around to fetch prop, prop is not there…cue awkward where’s the dead baby banter, until it is found and subsequently, decapitated and used to spill blood on the crowd. 3) The finale was a tribute to Brockie, where they brought out members of the other bands who are from Richmond (like GWAR) to do one final song. However, so many people jumped on stage, I couldn’t even tell you what they performed… one of the monsters was knocked over… and fans were taking selfies with the band members and dressed up stage hands as they were trying to perform. Security had given up by then.

Heard leaving the venue: “I look like I just murdered someone and IT IS AWESOME.”

This was show 1 of 3 this week at The Roxy… and I bet I don’t hear anything like that at the other shows.

Author HardRockChick 6
Diary of a madman Walk the line again today Entries of confusion Dear diary I’m here to stay ~Diary of a Madman When I...
Read More
My Musical Adventures