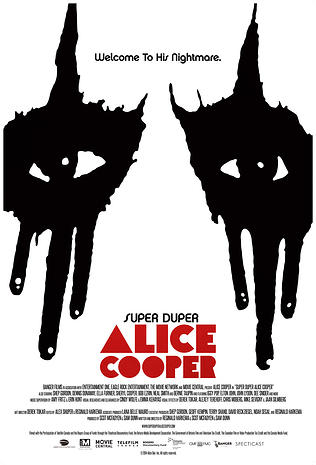 “I was thinking of coming out here with powdered sugar all over my face”, Alice Cooper, star of the documentary Super Duper Alice Cooper, proclaimed in jest as the panel discussion after a screening of the film at the GRAMMY Museum began. Only the second screening of the film after a premier the previous weekend at Tribeca Film Festival, I sat in the small theater with stars of the film: Cooper, his wife Sheryl and daughter Calico, Dee Snider, and Pamela Des Barres, who Cooper spoke of along with the other GTOs as girls who “had an agenda” when discussing how they took the newly transplanted Phoenix band and brought them under Frank Zappa’s wing.

The film covers the typical band genesis items, including Cooper’s brush with death as a child, and the band’s path to success. However, instead of the usual ‘talking heads’, the film employs a technique of animating or manipulating archival footage to make the interviews much more interesting. Speaking of archival footage, the photographs and videos culled for the documentary give an exquisite inside view of the creativity and, at times, dumb luck the band had along it’s way. While gaining even more admiration for Alice Cooper, I also was met with that familiar feeling of envy for those having lived in LA in the late ’60s. “It was a period where the real freaks were all in one place”, Cooper stated.

The most talked about parts of this film will probably be where Cooper comes clean about the drugs that plagued his fame at times. The movie leaves no mystery in that department; it’s on the level of rawness and honesty that can only come from someone who has been sober and gained perspective for so many years. I spoke with Dee Snider at the Revolver Golden Gods awards, and he highlighted that as a standout part of the film. You can see the clip below. Don’t do drugs, kids! Cooper spoke of his influence on Snider, and the first time he saw Twisted Sister: “I was like, ‘what have I done!'” They also both contributed to a discussion about influences outside the rock world feeding into them, such as musicals and…cartoons. “Wile E. Coyote was a big part of both of our careers!” Cooper stated.

Go see this documentary when it makes it’s way to you. You’ll have even more love for Alice Cooper…a man who claims his mom still tells him, “hey, superstar- take out the garbage!”

Author HardRockChick 10
It’s night 1 of 3 this week for seeing The Faint. The Fillmore is teeming with in-the-know music junkies. Shy Child, a New York...
Read More