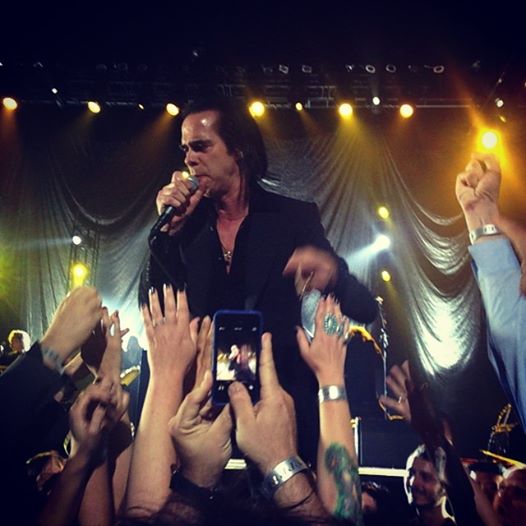 “I saw Jimi Hendrix, Led Zeppelin, and The Who there” my father-in-law said about the Shrine Auditorium earlier that day. I sighed.

It had been the same sigh that escaped my lips when I bought pit tickets months ago. I just didn’t want to sit in a seat for this show. As I entered the small pit in front of the stage that night, moments before the show began, I knew this was going to be special.

And it has been a while since I’ve felt that. In fact, I thought I may have finally become that jaded asshole everyone always wondered how someone who goes, err…went to 100 shows a year had avoided feeling like. But I’m not worried about everyone else; I have spent a lot of this year worrying that I had lost that one thing that was sure to always bring me joy. And a huge part of it, ironically, is that I have grown really fed up with the amateur photographers. Yeah, I’m probably one of the first people that ever covered shows in real time (late 2008!), but I know when to put my phone down. Fast forward to now, and I barely even want to do it anymore; what’s the point in sharing my experience when everyone else spends the entire show trying to do the same thing? Something got lost along the way…

But I was found when the band came on the stage and the struggles of this last month evaporated. I’d seen Cave and Co. before, even last night, but this was immediately different. Perhaps part of it was that I hadn’t stood that close at a show in a long time, and I, admittedly, got the unfamiliar sensation of being kind of star struck. The people who I may have been listening to most in the past year, standing before me, provided the sweet sensation of surreality.

Crooning “We Real Cool”, pacing the lip of the stage in his staccato way, Cave brought to life the story that had unfolded in the documentary the night before. I understood everything about him in a different way. I’ve been infatuated with “Jubilee Street” since I first heard it, and, unbeknownst to me, I was standing in front of some point of the stage that Cave suddenly leapt out on. It was as if a cartoon character had come out of the TV; out of my headphones. “She had a history… but she had no past…” Jesus Christ, I think I forgot to breathe for that entire song. Warren Ellis is maddeningly playing on the violin, an extra bow bleeding horse hairs stuck into the back of his shirt like a weapon, as the tempo speeds up and Cave frantically sits down at the piano and pounds away. With everyone focused on work, I took out my phone for the one time the entire show to share a moment of video…and before I knew it, Cave was suddenly in my face and I snapped this out of habit before putting the stupid thing away.

Quote of the night: “I’ll suck your dicks if you let me stand in front of you so I can get photos and touch him!!!” ~small girl to two most likely gay men.

The pit probably held 100 people, and the crowd ebbed and flowed depending on where Cave was located. I had never seen him spend so much time in the crowd before; and as he talks about in 20,000 Days, he was speaking to specific people as he spouted his poetry. I was overwhelmed by so many things: the songs I’ve laid in bed and cried to, seeing him sing them with such conviction into adoring fans’ faces, seeing the fans reactions to this happening. Music saves- both the artist and the fan- and sometimes that gets lost in the transparent atrocity of a process that we currently live in.

There were moments I was scared for him, that I was scared for myself. Emotions stirred within me, meanwhile, he was being fondled by stranger’s fingers. He encouraged it. The gleam of power, love, fear, and decades-old pain in his eyes was omnipresent; and I felt like I was experiencing the Cave I had read about from an era past that night rather than someone in the twilight of their career.

When “Higgs Boson Blues” began, a song that is somewhat oddly emotional for me, I shivered since I had listened to it 5 times that day, specifically writing about it for my piece from the previous night. And then he came and stood above me to do that entire song. I remember when an artist did their job and made me feel like they were singing just to me when I was younger… I know how that trick works now and I just roll my eyes at it while I stand farther back now but that night….. that night it felt like I was dreaming, it felt like he had specifically settled over there to sing just to me. Perhaps the best artists make you forget what you’ve learned, make you experience things anew again. But as he beckoned all of us under his spell to touch him while he sang, “can you feel my heartbeat?” I broke out of the spell and perhaps became the first female to ever back away from Nick Cave.

It was too much and it left me in tears.

But soon after, “Stagger Lee” strode in and saved the mood with it’s sexy, bluesy swagger. Cave is sweating through his sequined black dress shirt, riding an invisible horse. Then he decides to part the sea of the crowd and runs through between me and my husband, and as we and everyone else are trying to help/get out of the way to get him over the barricade and into the normal seats on his mission to wander, Cave whacks my husband in the face with his microphone. Which would be a cool story except that it marked him up for his own big show the following day.

With the crowd still rapt in attention, the encore wound through five tracks, my favorites being “Jack the Ripper” and “Do You Love Me?”. Counterpoints. Swaying and drinking in the last bits of the show that made me feel again, I thanked Cave and The Bad Seeds for what was easily one of the best shows I’ve ever seen. And at over 700 in the past 7 years, that is no small statement.

Author HardRockChick 7
As much as I enjoyed last night’s intimate acoustic show, this is how BRMC is supposed to be seen. In fact, they far exceeded...
Read More