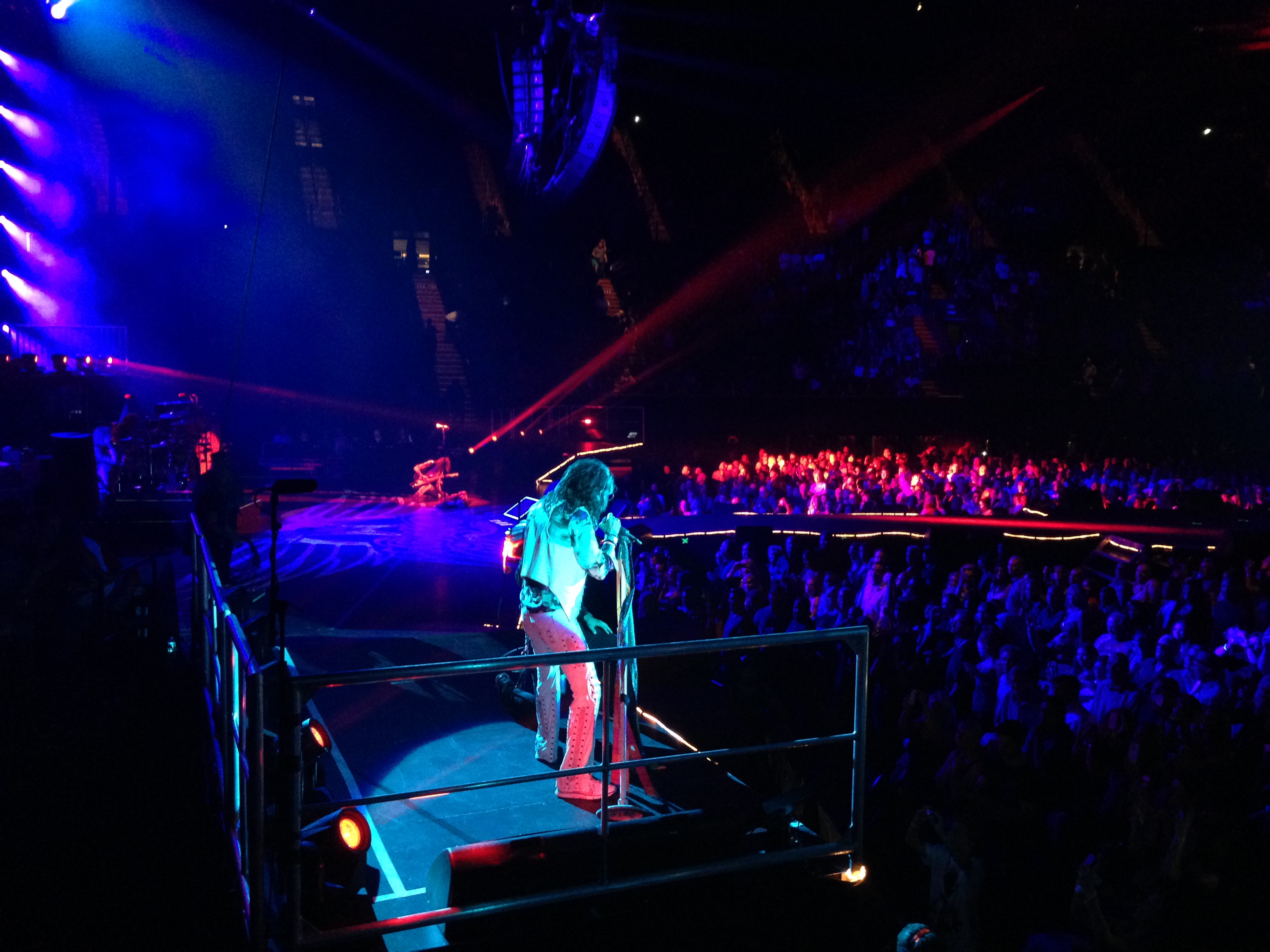 There’s nothing in the world like the big rock show.

From the first sight of bootleg t-shirt sellers, to paying way too much for parking, to the littered excess of tailgaters strewn about the lot, to standing in the merch line careening your head in anticipation of paying way too much for a piece of fabric with a date on it, to making your way down to your seats, a speck amongst a crowded stadium, where the stage beckons you with it’s promises of a good time.

They may not have had our small size shirt, but we probably had the best seats in the house. On the side corner level with the stage, it would be like an inside look at the inner workings of some of tock’s biggest icons.

But perhaps this wasn’t the show for that. 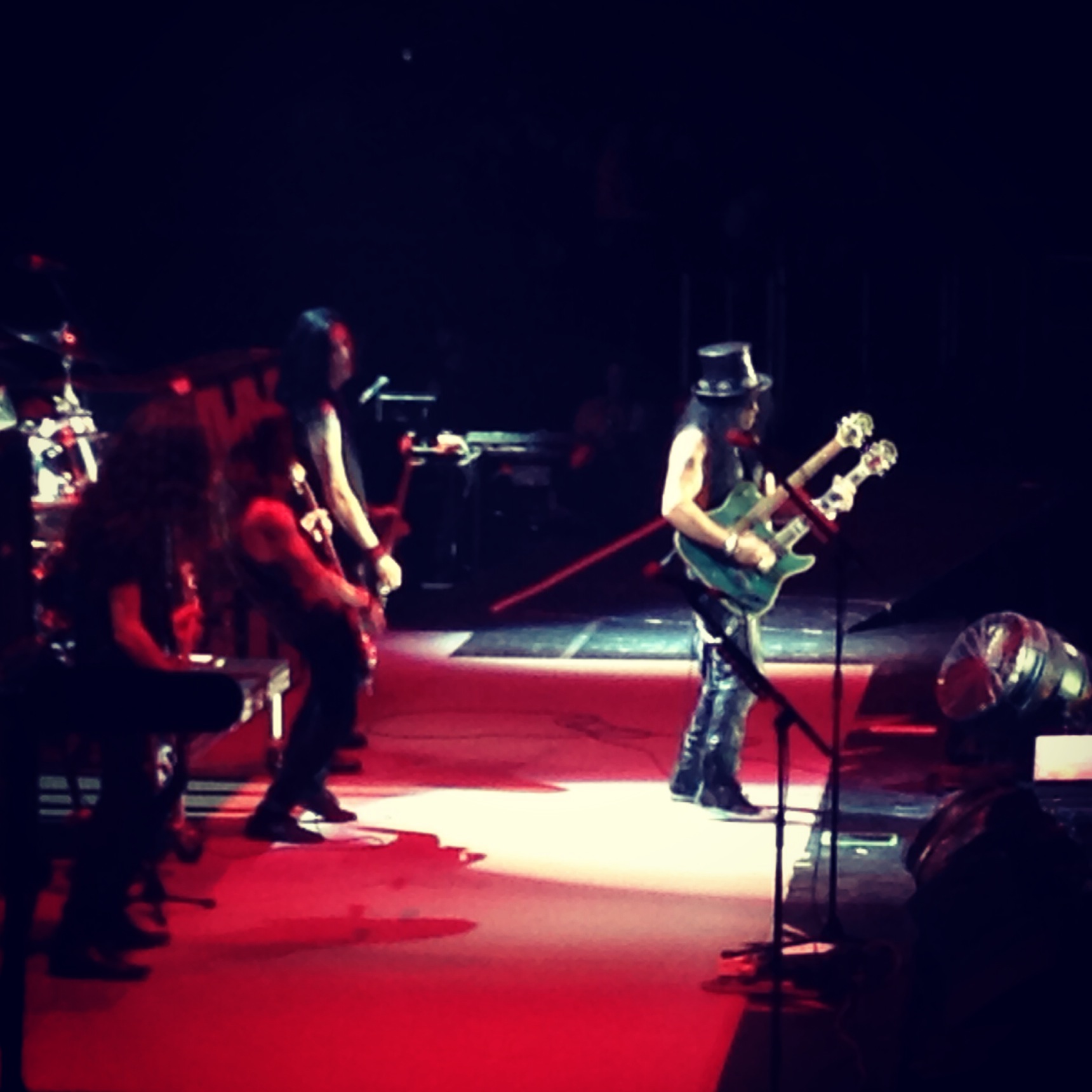 At precisely 7:30pm, the curly-headed, top-hatted guitarist named Slash sauntered on stage to wile us with his blues-laden guitar playing. The pretty voice of Myles Kennedy, when not standing on it’s on, provided a facsimile of an Axl or a Weiland. Flanked by cookie cutter rock musicians dubbed The Conspirators, they played some of Slash’s new material- much of which could come across as great had it more stage personality. Of course, people wanted to hear the Guns ‘n’ Roses material, and one Velvet Revolver song. If Tyler and Perry are the Toxic Twins, then what do we call Axl and Slash? I spent part of the set wondering if I felt like the GNR songs have been cheapened to me by hearing shrapnel of the band play them over the years: Axl + whoever, Slash + whoever, and Adler + whoever. Then I realized I was overthinking it and went back to enjoying Slash’s mean green double neck guitar. It was kind of weird to see one of our generation’s guitar gods as an opener, but this is Aerosmith, and it seemed like a less showy Slash on stage that night, careful not to upstage the headliners.

I have seen the superstars of days past hanging on to the dream, trying to catch that ever-shifting spotlight like a cat trying to reach the beam of a laser pointer. Sure, they can be good, but in the back of my head, I am always saying, “what it would have been like to see them in their prime!!!”. I don’t really think I’ve seen anyone in their prime- I will never experience the overflowing craze of being at a show for the hottest act on the planet and being a part of that fervor- so, I realize, I am hanging on to the dream of days past, too.

I saw Aerosmith for the first time in 2002, with Stone Temple Pilots as an opener (touchÃ©?). I was in the lawn of an amphitheater. 12 years later, and way better seats, I was ready for a rematch. I could feast my eyes on the guitar racks, the flick of the switch to turn on the fog machine, the teleprompter, a guitarist in his precious moments before stepping on stage, the giant sign taped to the ground that said ‘LOS ANGELES’… all the things you do and don’t want to see side stage. And then, old school style, an announcer’s voice boomed, “Hello Los Angeles!!! The Bad Boys From Boston….AEROSMITH!”

Beginning with “Back In the Saddle”, there was that awesome rush of seeing real rock stars in their human form on stage, playing songs you’ve listened to since the beginning of your time. That was quickly followed by the shock of being so close to aging rock stars. It’s hard to watch superheroes get old. Add drugs & excess to age & gravity, and you’ve got real unreal people up there now.

At first I thought they sounded awful; Joe Perry seemed to struggle to find his rhythm and Steven Tyler’s golden voice seemed like a broken rubber band. But once I right-sized my expectations, all was well. There was a constant camera crew flitting about on stage, doing live video that was pulled onto the large screen with some trippy effects; however, this did not always work…leading to some awkward video of Tyler for the jumbotron. This far into the tour, I thought these kinds of mistakes were a little odd. There were also some missed cues that caused video from performances long ago to be out of synch with the song, which I found distracting. 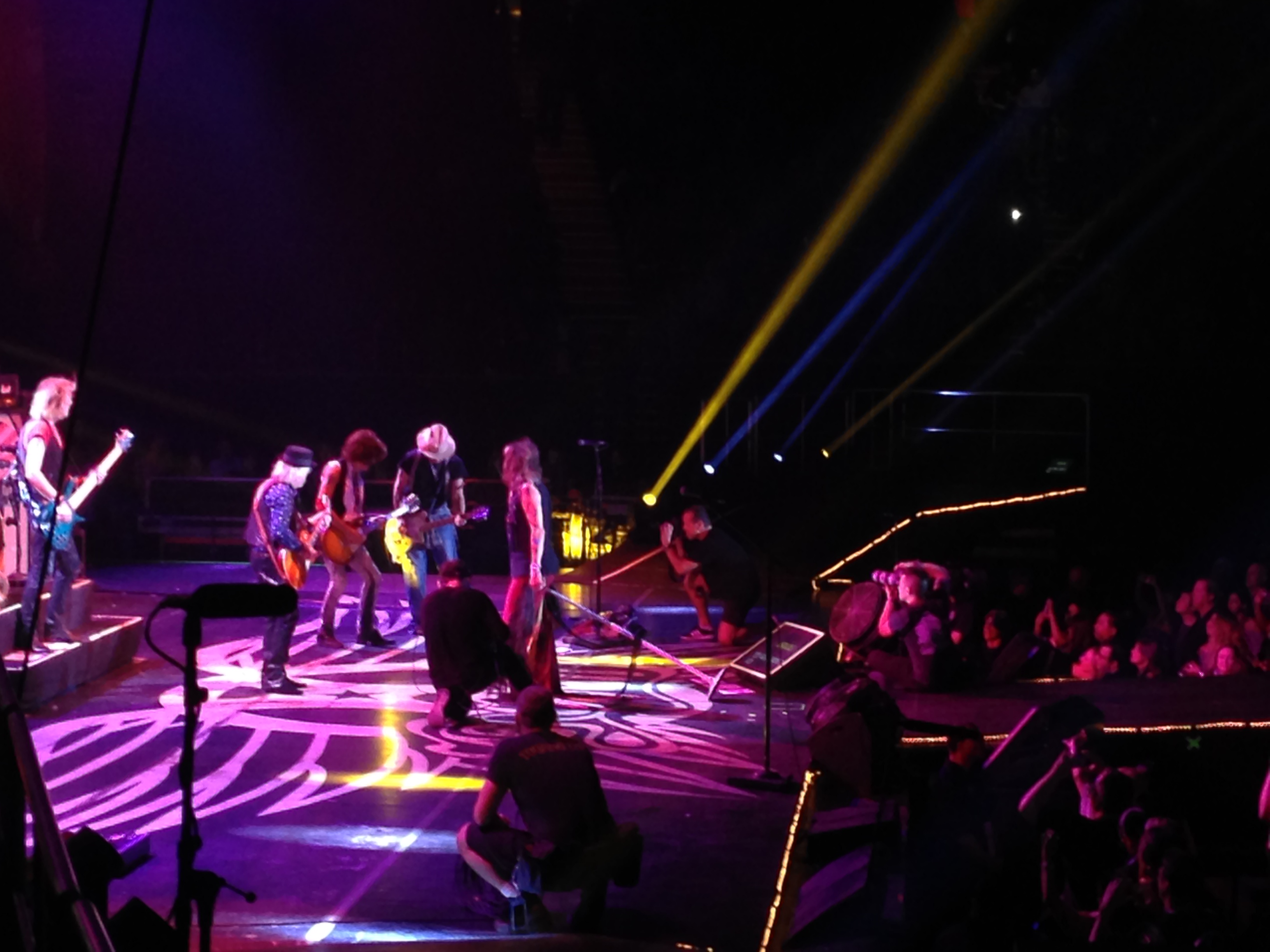 However, Aerosmith are the kind of band that can fill a stadium show with hits. Those kinds of bands aren’t being made anymore. Sure- they played a few deeper cuts- one with Johnny Depp in tow (“Big Ten Inch Record”)- so I’m not sure if that counts. The band utilized every inch of the stage, maneuvering a catwalk into the middle of the floor as well as both sides of the stage.

First highlight of the night: “Cryin'” into “Livin’ on the Edge” – where I desperately wanted Eddy Furlong, Alicia Silverstone, and Liv Tyler to saunter out on stage. It’s LA! Come on. When not singing along, I reflected on how normal looking Brad Whitford and Tom Hamilton are, in comparison to Joe Perry and Steven Tyler, who could not be anything but rock stars. Someone who’s never heard Aerosmith would be compelled to approach them to ask if they are rock stars. It’s just a vibe some rare people are born to exude forever. 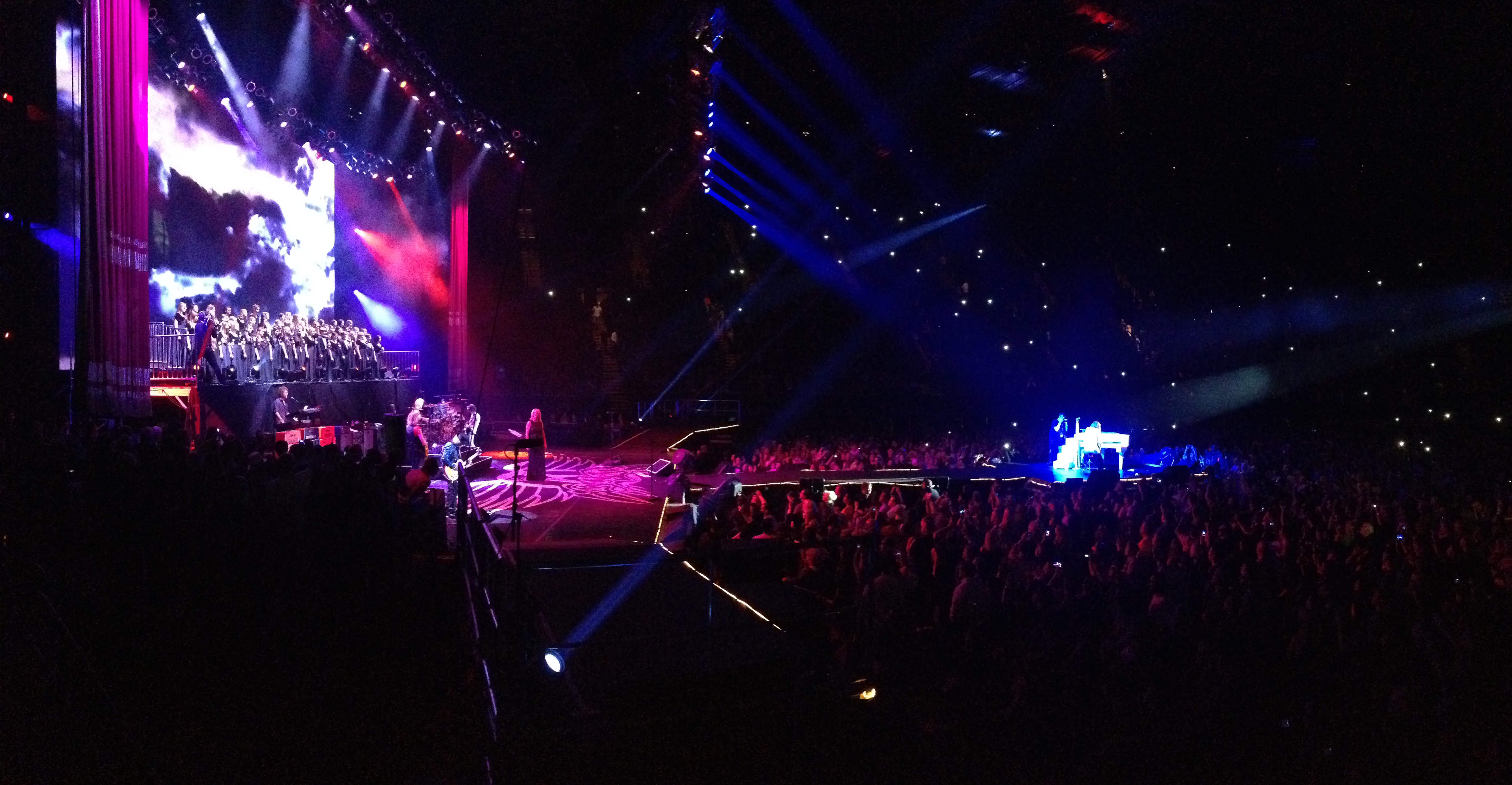 The second highlight for me was the encore, where they took expected songs, “Dream On” and one of my favorite songs ever, “Sweet Emotion”, and did something unexpected. A piano rose from the tip of the catwalk, with Tyler at the helm, as a curtain pulled back from the top of the stage revealing a full children’s choir. This ubiquitous song was suddenly transformed into something new, something EPIC! There was Tyler at the piano, these ethereal kid’s voices, and then Perry playing guitar ON TOP OF THE PIANO! Unfortunately at this age in their game, and in comparison to the more straightforward production of the rest of the set, it took this kind of production flair to push jaded assholes like me into the excitement zone. But my researcher’s ears witnessed that being the moment everyone was talking about on the way back to their cars. They rode that wave with “Sweet Emotion”, which was the perfect tune to have ringing in your ears as you cruised out of the ‘hood of Inglewood and back to wherever you came from. 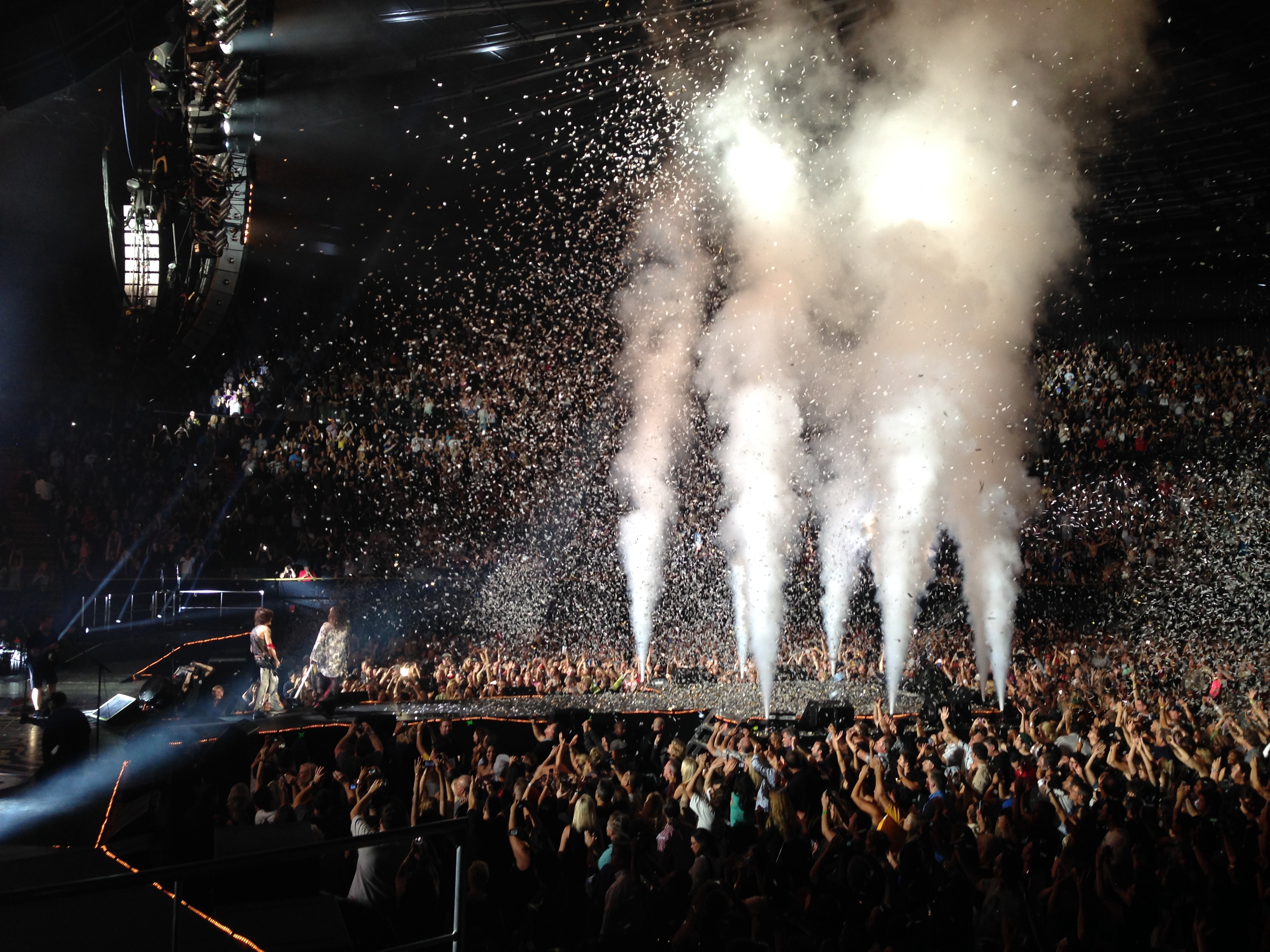 While rock & roll has saved my soul, I am fully aware we are living in a post-apocalyptic rock & roll world. A place where people watch Aerosmith through their phones, the chicks on the side of the stage spend the entire set taking selfies, and the rock stars wear sneakers. But with blinders on and the focus just right, I can lose myself in the sweet promise of what rock & roll used to be, if just for a little while.