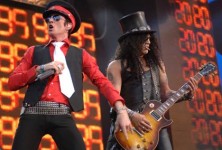 Meow. This is the stuff that rock ‘n roll dreams are made of.

Knowing that we are all starved for real rock music, scalpers really ravaged tickets for this show. I had to buy a second hand e-ticket…no keepsake stub for me. Frowny face.

So I was running on rock ‘n roll time and missed the opener, The Actuals. I had done my homework and found out that these guys were coming on quite late, and since I was going solo, I didn’t want to stand around getting hit on for 2 hours.

Regardless, I was able to secure prime real estate at my usual spot in front of the speakers to the left of the stage. People were already to the point of yelling “Hurry up!” at 9:50p. These impatient people had obviously never seen these guys when they were in G ‘N R…

Then the guys came on. Wow….I was standing right below Dave and Duff. They looked fantastic…black leather and chains, nazi police caps and fur, bandannas and tattoos. My idea of rocker wear. The energy was surprisingly mild at the start. Not in a bad way- I realized that I wasn’t getting pushed, so I looked around and everyone was standing there, mouth agape. Mesmerized. Am I really seeing this? I don’t think anyone expected this marriage to last- supergroups are supposed to be one hit wonders, an ego clash of gargantuan proportions. Not to mention the specifics- Weiland’s substance abuse and recent publicized incident where his wife burned his clothes, rumors of break ups, and a four year hiatus. So it took a while for people to get used to being in the presence of a fragile genius. Personally, a seventeen year old dream to see Slash was finally coming true- I used to put on a top hat and fake nose ring and candy cigarette when I turned my violin on the side and pretended it was a guitar! And here he was, his sweat flinging on me from his curls….*sigh*.

And then, three songs in, I got kicked out. I didn’t read any no camera signs, and having been to many shows there where it’s never been a problem, I was snapping some pics for this entry. I got taken out by a security guy and he made me check my camera AND erase my pictures. My really good pictures. Damn. Luckily he led me back to my spot and I didn’t have to fight my way back to the front.

The energy starts to ramp up, I see some genuine fights in the crowd and some surfers pulled over the barrier. Weiland starts to shed his clothes, keeping the hat and ‘leave nothing to the imagination’ pants. The man is emaciated. You can really see it around his mouth- as he sings, his skin clings to his jaws and mouth in a very unnatural way. Regardless, he sounds phenomenal. There are many parallels between him and the man I saw on my last trip to the Warfield- Mr. Iggy Pop. They don’t pick up an instrument but you could really care less. They are the instrument. Weiland writhes incessantly across the stage- like a stripper without a pole. It’s a serious talent.

While I’m on looks- Duff has the perfect rocker leather jacket. He’s really looking Bowie-ish these days. And Slash- while everyone else looked a bit worn, he seems to be frozen in time. His patchwork pants and black bandanna hanging from his back pocket, the dangling cigarette, and t-shirt about the evil Bush family; it was the perfect ensemble of rocker rebellion.

As I was watching Slash play, I was surprised by the mixture of intensity and ease that can only be pulled off by a true virtuoso. There are moments when you can see the concentration pouring out of him into the guitar, a perfectionist at work. At the same time, the cigarette dangles- the quintessential image of effortlessness. Or he’ll break out in a grin, or, you know, play the guitar behind his head.

Guitar Hero was inspired by guys like this. They don’t just stand there and play, like these ‘intelligent rock’ nerds do. They move, they raise the neck, get on their knees, hell, play behind their head. The moments where Weiland, Slash, Duff, and Dave all come to the front of the stage, step up on the little raised edge, it’s like the perfect rock wave. It’s intense. It’s a show.

The setlist was crafted to steadily raise the energy, not a hit, miss, hit, new song shuffle like many setlists. The Contraband hits- ‘Fall to Pieces’ was in the middle of the main set, ‘Sither’ was the last song. There were a few new songs that sounded great, including ‘She Builds Quick Machines’, ‘Let It Roll’ (the opener- ballsy to open a set with an unreleased song!), ‘She Mine’, and ‘Get Out the Door’. Recycled material- the crowd goes crazy for ‘Vasoline’ (which was interesting after seeing AoA do it) and ‘I Used to Love Her’ got a mediocre reaction. Covers- a fabulous rendition of Talking Heads ‘Psycho Killer’ and an even fabulouser version of ‘Wish You Were Here’. It was solid. Rock solid.

Interesting tidbits- there was a double encore…which I have been seeing A LOT lately. Funny Weiland moment: apparently some guy was flipping him off repeatedly, so he called him out, saying something to the effect of ‘do you want to stick that up my butt or something? I know this next song is a love song, but it is not for you and me, buddy.’

Rumors are flying that we’ll see another tour soon- a shared bill with AiC. Sick.

Apparently someone had a spy camera in there– scroll to the bottom for some great shots.

And here’s some video from one of the LA shows, where you can see the megaphone/microphone effect: