It was to be the final show.

I slept like a baby in Philly, woke up late, and it was at this point we realized that we would need a place to get ready before the show tonight. So we decided to go back to Christine’s place in Brooklyn before going on to Holmdel. The GPS totally fucked us, at one point having us leave the freeway and go to a dead end road by a river. It was like it was taunting us to off ourselves or something. The rental car air conditioning didn’t work, and it was hot and we were totally stressed out. We finally made it back and had to quickly get ready and hit the road again….where we proceeded to get lost again…..and then stuck in traffic.

The traffic into the venue was really bad. We barely made it into the VIP lot at 7:30. I had to stop at will call to pick up some passes, and heard SSSC hit the stage. I had two extra tickets, which I gave away to some people who were desperately looking. I love being able to do that- I always tell people to pay it forward! I’ve had such good luck this tour, I try to help out others when I can.

So we essentially made it to our seats at the same point as yesterday, missing the first couple songs. But, man, the seats were great! I paid a lot for them…but it was worth it. The stage was curved, which gave the whole thing a different vibe. The weather was nice and warm, too. SSSC killed it, as usual. I could watch Boots dance all day. Perkins came out and was playing with the drum set a little. Between sets, we went backstage for a bit and Christine ran into Debbie Harry, and then we both ran into Amanda Palmer by the restroom. Interesting…

We got back to our seats partway into Pinion/Wish. It was red leather pants night! The setlist was just amazing…I had asked for ‘Last’ at my final show, and I got it. When it started, it felt unreal…is it really happening? Am I hearing things? I full on freaked out the whole set, I felt bad for the people with cameras behind me. I barely filmed or took pictures because I didn’t want to miss a minute. My one remaining thing I wanted was a tambourine, and one was thrown near me but not close enough….oh well. It’ll be my goal for the reunion tour! I was really overwhelmed with emotion this time. Reptile, Non-Entity, La Mer, Mr. Self Destruct (I sing ‘Little Miss Self Destruct’)…I was grabbing onto Christine all wild eyed going “oh…my…god….WOW!!!!” I just let it all out. TR made a small speech about how this was the last tour for a while, and that essentially, when he was planning it he thought of playing amphitheaters under weather conditions like this- as the sun goes down. The sun was setting on my final NIN set and there was a full moon! It was like being in a movie….I couldn’t wrap my head around it. *thanks to the girl behind us that did the mini photo shoot to capture this shot- and apologies to those around us who were annoyed.

And then it came time for Hurt. Normally, I do not get emotional during Hurt. The only NIN song that makes me cry when I hear it live is SICNH, which I didn’t hear on this tour and I’m glad because I would have ruined my makeup for sure. But this time, Hurt got me. And it’s getting me right now…. There has been much discussion as to why Jane’s is closing, but on a personal level, they have become my medicine to get me over the NIN set. NIN has been then soundtrack for my life, and every time I see them, I’m reminded of a lot of dark times.

Tonight I was supposed to be backstage for the Jane’s set, but security would not let us back there. So I missed the beginning of ‘Three Days’ running back to my seat. Luckily it is ten minutes long. At first I was pissed, but in reality, I enjoy shows much more out front, and my seats were so good that I was actually quite pleased that things turned out the way they did. The stage setup worked really well for them- Perry, Dave, and Eric seemed to use every inch of it. I’m increasingly impressed by how personal the guys make the performance to those of us up front. Perry is like the host of a party, checking in on his guests. Dave impresses with his ability to multitask while shredding. I’ve always read about Eric’s importance with the band- the bass driven songs and his talent as a musician, but witnessing it is a whole other affair. And Steven is just a different kind of drummer altogether- really unclassifiable in my opinion. The most interesting thing about Jane’s to me is that these four guys couldn’t be more different from each other. And when playing, there are four little worlds going on up there. But there is something about the way that they fit together that creates some beautiful chemistry.

‘Three Days’ and ‘Then She Did’ will always hold a special place in my heart, but on this particular evening I enjoyed ‘Whores’, ‘Ocean Size’, ‘Mountain Song’ and ‘Summertime Rolls’ the most. There were a lot of Jane’s fans that moved down to the front during their set, and security was lax about letting them stand in the aisle and squish into rows, which was pretty annoying. But, their energy was really good. The ladies all swarm to try to get to Dave. Towards the end, some drunken guy started hopping over seats to try to get to Perry. ‘Jane Says’ was bittersweet. Perry poured wine into the cups of some people near me. I kinda teared up a bit here, too. This is it. The end, my friend.

But Jane’s has such a great positive energy that I pulled through.

I decided to stay up all night to catch my 9am flight back to SF. At about 4am, I was almost convinced to stay for Jones Beach…but unfortunately I am a responsible person :(. I ate my first real meal of the weekend at 4:30am, and watched the sun rise in Manhattan. Tomorrow, look for a recap of the NIN/JA journey. It’s going to be a gusher.

NIN setlist:
Pinion
Wish
Last
Discipline
March of the Pigs
Reptile
Meet Your Master
Gave Up
La Mer
Non-Entity
The Way Out Is Through
Mr. Self Destruct
1,000,000
Echoplex
Survivalism
The Good Soldier
The Hand That Feeds
Head Like A Hole
Hurt 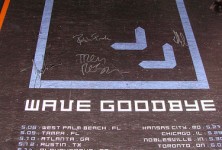