I honestly had no business being at this show.

It was initially supposed to be part of my ‘getting me through my post-NIN depression’ schedule. But instead, it became sandwiched between 2 NIN shows that I was flying in and out of LA for. But! I loves me some Karen O.

I consumed mass amounts of green tea, but I was still near zombie status when I picked up my friend to make the trek ‘overseas’ to the beautiful Fox Theater in Oakland. And then when we reached the front of the theater and I looked in my bag for the print at home tickets he’d asked me to print out….NOTHING. I’ve never (knock on wood) left home without my ticket before…this is how tired I was. But, a quick trip to the box office, and ouila! A nice printed ticket. Not bad.

*insert gush about how beautiful the Fox Theater is here*

YACHT: a male and female duo from Portland. One wears black, the other wears white, with matching mics. They have a sizable multimedia display. And the music is not good. Not good at all. I had a feeling I had seen this before.…back when it was just the guy and the multimedia setup was much much more lo-fi. Just not my thing. This was my third time seeing the Yeah Yeah Yeahs. I think Karen O is a great performer. Unfortunately, I feel like they are on a path towards the middle, when I wish they’d kept the edge they used to have. Karen wears some insane stuff though- this night seemed to be diaper chic….seriously. It really borderlines on ugly, but somehow she pulls it off. It was so weird to go from a NIN crowd to this. Screaming girls, happy people, hipsters…..it made me feel super goth, but at least the guitarist, Nick, made me feel like at least there was one like-minded person in the room. Except that he kept snapping pictures of the crowd with a Holga or something….it was a little forced. He was also having a lot of guitar problems.

Anyhoo, due to my NIN extravaganza, computer malfunction, and general tardiness of this write up….that’s about all I have. They were good as expected, nothing out of the ordinary happened, and the night will soon fade into obscurity. 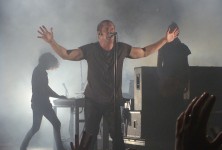