“I haven’t seen you here in awhile” says the guy at the door. I’ve been neglecting shows at my neighborhood dive bar over the past month. Thee Parkside is about the closest thing I have to Cheers….except for maybe Slim’s….or DNA…..hmmm.

I ran into my friend Thrasher Amy at the door, and we spent a good deal of time chatting about the pointless controversy surrounding the Mastodon set we saw on Saturday, the upcoming Portal show, and other SF metal happenings. Before I knew it, it was time for the direct support to come on, so I turned around and left the cool air of the patio for the sweatbox where the bands play. I had to maneuver around several extremely large musclemen- kind of a strange sighting for the usual slightly anemic looking metal crew that dominates this place. But then I remembered that the bands tonight are what I’d loosely define as workout metal.

Son of Aurelius are from Santa Cruz. I don’t know why, but even though I’ve seen several bands and musicians from Santa Cruz, I still think it’s a funny place for people who play heavy music to be from. Though it is where some of the Lost Boys was filmed….but I digress. My first reaction was that these guys look so young. Second was that the three in front look like brothers- they had the same sandy blond buzz cuts. Once they started playing, I was a bit underwhelmed as their sound seemed pretty shallow for the number of people on that stage. It seemed to improve as the set progressed, but I just never got into it. 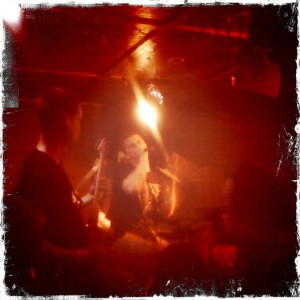 Back to the patio between sets, I chatted with Alan by the merch booths, where this Son of Aurelius shirt caught my eye for it’s Sonic the Hedgehog inspired design. Funny. Then I see one of the guitarists for Whitechapel emerge from the kitchen area with his guitar strapped to him and his hair soaking wet. It kinda reminded me of Skwisgaar– how he never takes his guitar off wherever he goes.

Back in the sweatbox, I was prepared to be jostled around by the crowd, but apparently the muscled moshers were able to keep themselves much better contained to the center than the normal crowd. As Whitechapel started playing, I thought something seemed off. I had missed Whitechapel at Mayhem last year at all 3 shows I went to because they were always the very first band to play. Sure enough, the vocalist, Jonathan Huber, announced that he was filling in for Phil Bozeman, who had to go home for a family emergency. He had actually performed earlier in the evening with his band I Declare War. That’s a lot of growling for one evening. He also stated that they had a fill in drummer as the usual one was home with a broken foot or something. Two men down- yikes. The crowd didn’t seem to mind, and honestly, I probably wouldn’t have known this wasn’t the usual vocalist if he hadn’t said something. He performed pretty confidently- I guess you can’t really hear if you mess up the words in their music. Whitechapel may not be my kind of metal, but they did sound really good in there, squeezed on that tiny stage. They played a pretty short set of 8 or 9 songs- all the vocalist was able to learn- before calling it a night. 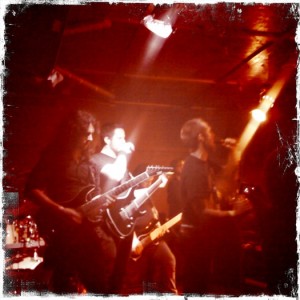 As I went to leave, I tried to envision what Portal is going to look like on this stage on Saturday. Should be interesting…