I remembered to remove the pack of gum and the pen from my bag, but I forgot my meal replacement bar, since, you know, I don’t eat dinner when I’m at these shows. They made me throw it away. I laughed at the ridiculousness, shook my head, and then the security lady called me back to spit out my gum. So stupid.

I stick my photo pass on right before Airbourne hits the stage. The Regency Ballroom is pretty much the only place where I’ll photograph in the pit- it’s big enough where I won’t interfere with the real photographers, and the light is ok for my shitty camera. I ran into Alan, who hands me a poster he got Bullet For My Valentine to personalize and sign for me earlier at their meet and greet. So thoughtful! 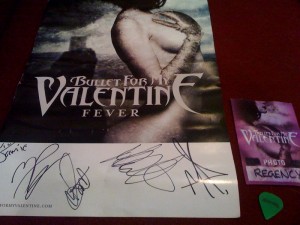 Airbourne, simply put, made me smile. They are from Australia, and yes, they sound A LOT like that other band from Australia that starts with the same letter. But they are fun to watch. They have classic rock star moves, great energy, and catchy, anthemic songs that remind you about what you love about rock ‘n roll. As I was shooting them, I kept getting distracted just watching them so much that most of my pics didn’t turn out. That, and they move around a lot. This is the kind of band that could handle a stadium and lots of pyro, but this ballroom suited them as well. At the end, lead singer Joel O’Keeffe took a beer, shook it up, and sprayed it all over the crowd….and the crowd…went….wild. It’s interesting that a mere 20 hours before I was watching another Australian band of a very different variety of metal.

Between sets, Alan told me Airbourne was by merch so I went and got a picture taken. Love the Australian accents! Chiodos are from…Michigan. I thought they were gonna be a Latin band to fit with the worldly rock theme here. Judging by the outfits worn by the screaming girls up front, coupled with the beats that came on for a bit as they set up, I figured this band would be ‘not for me’. But I did take some pictures. After the first three songs, I went and grabbed a drink and spent the rest of the set chatting with various friends, where the death of Dio was heavy on everyone’s minds. Well, except for the couple making out hardcore standing in the middle of the floor by merch…..seriously, they looked like they were going to eat each other!

I’ve spent quite a bit of time informing people that Bullet For My Valentine is not an emo band. They are a metal band- and a good one at that. I got into them last summer while on my Mayhem Fest trek. Love the Welsh accents, too.

The show was sold out, and the boys entered the stage dramatically to a very enthusiastic crowd. They began with a song off their new album, ‘Your Betrayal’. This was my second time photographing them, and they are a fun band to shoot. After the three songs, I watched from the side of the stage. As I had another show to go to, I was happy to hear ‘Tears Don’t Fall’ and ‘All These Things’, but especially ‘4 Words (To Choke Upon)’ early in the set. There was a lot of crowdsurfer action and girls getting pulled out of the pit for getting crushed. See- metal…not emo!

It was cool to see them headline a show after seeing them as an opener several times. There was a difference confidence about them. They were celebrating the recent announcement that their album charted at #3, which is quite an accomplishment in this day and age. I tore myself away and began the quick trek to SoMa for part two of the evening….