I sped through the rain-soaked, foggy Santa Cruz mountains watching the sun disappear. With the stereo cranked high, I tried to drown out the sound of myself, but my mind continued to race as fast as the car.

I have a lot on my mind.

Is it possible to be the happiest you’ve ever been, yet the most unsatisfied? It’s like the closer I get to making my dreams come true, the more frustrated I become. The clock is ticking. I want more, more, more, and I wanted it yesterday. I can see it, but I can’t touch it. So what do I do? What is next? How do I balance this with that?

The fog gets thicker, and as I skid around a sharp corner, I think about death.

Santa Cruz city limits. Strip malls are peppered with surfer culture. I navigate my way to The Blue Lagoon….which evokes no imagery of islands and Brooke Shields whatsoever.

The guy checks my ID at the door. “Where’s the girl on this ID? SHE needs to be here”. I killed her a long time ago, dude. After murdering him with my eyes, I enter the establishment. A long bar, a pool table, a room full of strangers. I have no idea where the stage is. I sit at the bar and grab a drink. People stare and I stare back harder.

Finally, I hear screaming, so I go towards the sound. After paying my $7, a guy takes too much time putting the wristband on my arm.

I stand there in my jeans and t-shirt, thinking about how three nights prior I was staring out the window of Soho House at the Hollywood Hills in a dress and heels surrounded by celebrity types. I love the high/low rollercoaster of my life- it keeps things in perspective- but sometimes I feel like I don’t know who I am anymore; or perhaps, who I want to be.

I’m not sure what the first two bands were called (they never said their names), but I’m certain they were local. Not bad, not great. The first one was death metal, complete with gauntlets. The second was more punk metal, and the guys looked like skaters. They also held up a sign at one point that had arrows going around in a circle, and the crowd obliged.

Between sets, I examined the venue. A long, narrow space not unlike SF’s Hemlock Tavern, it was mostly populated by a younger skewing metal crowd. I spotted a Slipknot hoodie and it made me sad. I also saw a couple making out against a wall for an entire set. What is it with all this metal show nookie I keep witnessing?

The third band was Son of Aurelius, who I had just seen open for Whitechapel a couple weeks ago. Apparently they had never played their hometown of Santa Cruz before. They sounded better here, but it’s still not my kind of metal. I had moved up front at this point. The pit got going, and since the stage is really low, people end up everywhere. The speaker stack by me started swaying, and someone steadied it from behind. Flying people knocked into me a few times, so I decided for the Goatwhore set, I’d move to the other side of the stage so I could balance on the wall. Big mistake.

This would be my third time seeing Goatwhore. Watching them set up, you can just tell what road warriors they are. The way they nonchalantly set up their equipment, nonverbally communicating with one another. What a hard life. But once the music begins, you can tell it’s what they love. 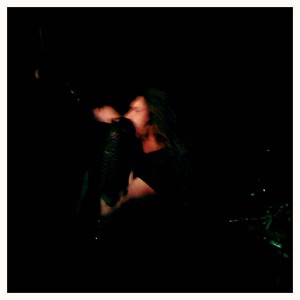 With the exception of us excited Goatwhores upfront, the rest of the crowd seemed to have thinned out. But once the music began, people streamed back in. I was getting into Ben’s commandeering of the crowd and Sammy’s bobblehead guitar playing when the pit started to get stupid. I’m all for a normal rough pit…I get it….but I’m pretty sure these people were doing dumb things just for the sake of doing them. There was the straight running and crashing into people, swinging arms around and hitting people on purpose, attempts at crowd surfing when there wasn’t a crowd to surf over, and my favorite- a duo of two guys, one holding the other and letting him just randomly kick people. I was pinned in a corner taking a beating most of the time, turned around trying to help regulate the pit. Both of my wrists were swollen from this, but it didn’t stop me from raising the claw during ‘Provoking the Ritual of Death’. Then I bailed to the back, where I was somehow still a magnet for flying limbs. It was just one of those nights. Plus, the two ‘security’ guys had to hold onto the speakers to keep them from falling over. 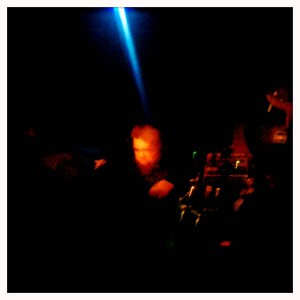 It was great to see a full length headlining set from these guys. For the most part, they went straight from one song into another, nonstop. They paid tribute to Dio. They asked what we’d like them to tell SoCal when they see them tomorrow, and the crowd’s response was something like ‘fuck you’. 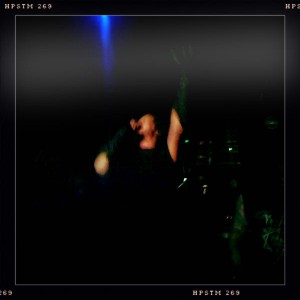 The band sounded great. When I bailed to the back, I was standing near some guys from one of the openers. At one point, one leans to the other and goes, ‘how’d they get that sound??’ 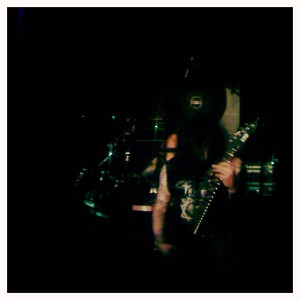 It was nearly 1am when the show wrapped up, and I limped back to my car for the hour drive home. With the iPod on shuffle, I tried to focus on singing along to everything. But every time I thought about a particular thing or person I’d told myself not to think about anymore, I killed the thought with a Goatwhore style blast beat. It worked pretty well.