When I made the decision to move home on account of my mom’s illness, I wanted to have one last crazy weekend in LA as a send off. It just so happened that this coincided with a Jane’s Addiction club show at The Roxy, and it couldn’t have been more perfect.

When something tragic happens in your life, one of the first things you think about are some of your best memories. And some of mine were spent following the Nine Inch Nails and Jane’s Addiction tour around last year. Not only do I have some of my best music memories from those shows, but what came from that whole experience were several new friends.

I drove past The Roxy on my way into town, and saw the line of fans waiting to get in. While there were some tickets given away by the band through twitter and such, it as a first come, first served show. I asked a girl later on that night how long she had waited, and she said she had been there since 6am. This show was about the fans; and with all that I’ve done with this site and what not, that is the most important word for me. I’m a fan, and no matter what happens, it’s always about the music. 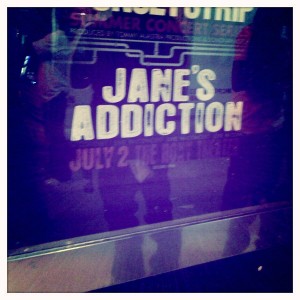 The show was special for Jane’s because they recorded their first album at The Roxy. I hadn’t been there in three years or so, but it is a fun little space that holds about 400 people. While part of me wanted to squeeze my way up to the front, because of my NIN/JA friendships, I was able to sit at a VIP table with two of my best girlfriends with little passes dangling around our necks. I never take anything like that for granted, and am humbled at what interesting things writing HardRockChick has led me to. 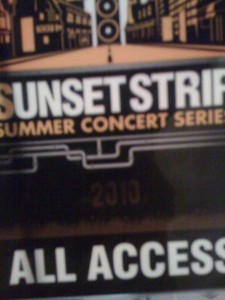 The show began with a circus sideshow-esque reveal of several ‘freaks’: a sword swallower, a wolf boy, a guy who could put sharp things through his skin and not bleed, and a rubber boy. It created a great ambiance for the show, as we oooo’ed and ahhhh’ed and gasped, especially at the guy who stuck himself with things. 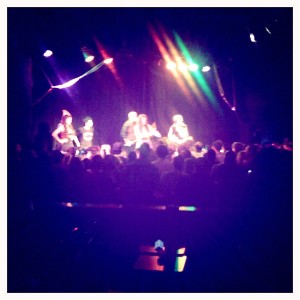 Then another full circle NIN/JA moment occurred: Tom Morello sat near us in VIP. Many of you readers know that he is one of my all time favorite musicians, not only for his skills but for what he stands for in general. I mustered up some courage (alcohol helped) to chat with him a bit, and while I did kind of fangirl out he was really really nice to me.

Normally, I’ll have a drink or two at a show, but I never really just let loose because I am essentially writing the piece in my head as the night goes on. This time, I just had fun. And while this means that the details are fuzzy and I have a pretty epic hangover today (Goldschlager and Jagermeister….blahhhhhh), I really had a great time with my friends, which is more important to me now than anything else.

The show started with two girls dangling above the stage by the skin of their back. Crazy! Then out pops Dave and the music began. It was weird to see Duff playing with them- he’s all kinds of amazing but such a different presence in comparison to Eric. I got totally lost in the set. The energy in the room was amazing- being at the back I could really feel it. It truly seemed like a fan show- everyone knew the words and were having a great time. We were standing on the seats in the booth dancing along. Music is such great medicine; for the 45 minutes or so that they played, I didn’t once think about anything else going on in my life. I often think of my life in snapshots in time, and from this night it would be standing in that booth with my friends singing ‘Ocean Size’.

“Some people tell me home is in the sky” 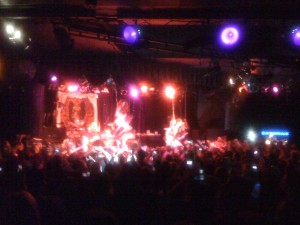 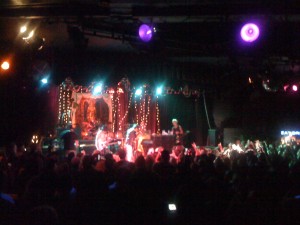 I know I have dark days ahead of me. I know I’m really emotionally fucked up right now, which is causing me to do things I wouldn’t normally do (I’ve developed a habit I’ve deemed xanaxting- I apologize to those that have been affected). I feel guilty for taking these three weeks to live my life before going to my mom. But I do know that in moments where I will need to think of something good, that in this evening I created some amazing memories with friends and a band that I love.