I’m writing you from 12 years in the future, where everything and nothing is the same, and your life is about to come to one of those defining full circle moments.

You’re about to graduate high school and leave that small town you hate. I’m about to move back there.

You probably have a White Zombie or Korn CD within arm’s reach right now. Last night I had the members of those bands nearly within arms reach.

You’ve got rock star dreams; you’re not sure exactly what you want to do, you just know it will involve music. I’ve still got those dreams, and still don’t know exactly what I want to do.

I’ve driven south of San Francisco 3 times since deciding to move away, as if I’m making practice runs for my roadtrip home that will commence in a couple days. This time I’m on my way to Shoreline for Mayhem Fest, home of many great music memories from SF, including 2 of my all time favorite ones- Trent Reznor at Bridge School and being backstage at NIN/JA. 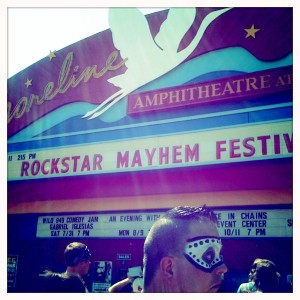 The VIP will call was the most ridiculous line I’ve waited in at a show. An hour later I finally got my pass, though my ticket was mistakenly a lawn ticket. It didn’t matter for the second stage part of the day, though, so off I went to catch some bands I’d never seen before.

I thought the will call debacle had caused me to miss 3 Inches of Blood, but I walked up just in time. They are one of those bands I’d just missed every time they came through for some reason. I enjoyed their throwback thrash ways. 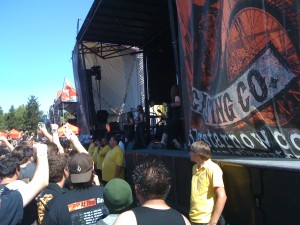 I would have enjoyed it more though had this happened over a month ago. As I watched the parking lot bands, in the blazing heat alone, I realized that right now I am not in a place to have fun in these kinds of conditions. It is not the place for someone who doesn’t feel 100% healthy and happy. Normally the crowds don’t bother me, nor would the heat. But today everything bothered me.

Off to the other side of the lot to see Chimaira, I tried to find a close spot out of harm’s way. I know nothing about this band, so I was surprised when I recognized some of the songs and ended up enjoying the set. They were definitely one of the heavier sounding bands of the day. So it was fitting when this dude came from behind and pushed me out of his way, only to encounter another dude immediately after who was not so easily push-out-of-the-way-able. In fact, this dude simply scolded him, didn’t like the response he got in return, and then punished the pusher by punching him in the face twice right in front of me, so that the guy fell back onto me. It was like being in the middle of a boxing ring….which was kinda badass to be honest once I realized I wasn’t hurt. I took a moment to remember how the last time I saw Korn- 10 years ago- was the only time I ever punched a girl in the face. She deserved it.

I stayed put while the other stage had a band play and waited for Hatebreed. I’ve been to more than one show that Hatebreed has played but had never actually watched them before. The crowd was insane. Say what you will about Jamey Jasta- I will say that his high kicks highly perturb me- but he does have some ability to do the whole instruct the crowd to do things bit without seeming desperate and annoying. Perhaps it’s because they are all very willing participants. At one point there was a pit going around the soundboard that was pretty insane. 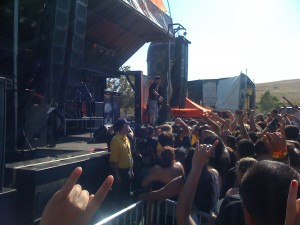 I left the set a bit early so I could get my pass sorted out, and just happened to run into my friends Jeff, Darrell, and Hetal out of that entire mass of people. So weird! A quick hello/goodbye and I was off to the much more comfortable backstage patio of Shoreline.

Soon after, the main stage bands began, so I watched Five Finger Death Punch from some seats out front. I saw them late last year, shortly after Zoltan had disappeared for a while and mysteriously reappeared with little explanation. I’m not super into their music, but they do put on a good show. At one point, the drum set raises up high in the air….but that’s all it does. I’m sure Joey Jordison was rolling his eyes in his dressing room. They did a cover of ‘Bad Company’ that was pretty good. 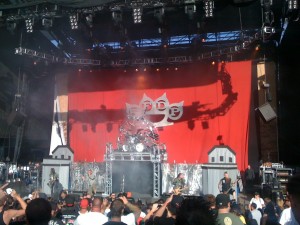 When I went backstage this time, I was sitting in the courtyard by the dressing rooms for most of the rest of the evening when the bands weren’t on stage. This is where I had some of my most surreal moments.

18 year old me: In 2 years you will watch this film that will change your life. Almost Famous will help you understand yourself, and on this particular evening, you will have your own version of one of your favorite scenes from the film. When Penny Lane and William Miller arrive at the Riot House, and they are walking down the hall past all of these hotel rooms filled with musicians, and William is all wide eyed at everything he sees in the rooms, and Penny is in her element…..that was me last night.

One of my favorite guitarists was walking around warming up on his guitar and we exchanged smiles. Rock stars traveled from tour buses to dressing rooms on Segways, little dirt bikes, and bicycles. My favorite rock star couple walked right past me, and I was pleased to later see the wife watch from the side and dance around a bit to the songs instead of seeming bored like many rock star wives I have seen. I was introduced to Joey Jordison, and shook his cornstarch covered hand while seated, which was good because I was able to pretend he was tall. I saw a couple musicians in their skivvies as they came offstage or made mid set costume changes. I even ran into a comedian I had seen open for Dave Chappelle before. It was all very innocent, but very exciting to me.

I watched Lamb of God from the side platform, which gives you a great view of the crowd and the band. I love watching the crowd from this angle, but my favorite part might be that I can see the drummer so well, and Chris Adler is an amazing drummer. The only other time I had seen LoG was opening for Metallica, so in that weird ‘in the round’ stage set up. Another funny thing about watching from here was that for the first part I stood behind two Oompa Loompas who were rocking out. It kept making me giggle, especially when they stood up to leave and offered me a seat, and high fived me. Or low fived, I guess. 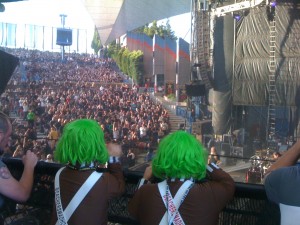 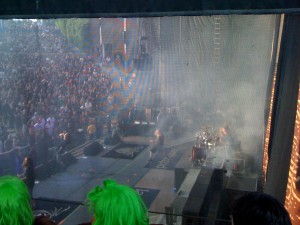 Between sets, I was able to witness a conversation where I learned so much. You see, when I’m the only girl in a group I always become ‘one of the guys’, affording me the opportunity to understand the male species a little more. This conversation had to do with online dating and male strategies for doing so- casting a wide net, weeding girls out based on quotes and picture angles, and the best part- sites for sugar daddies, sugar mommas, and the most efficient one: seekingarrangement.com. Once upon a time not long ago, I decided that I should probably go out on a normal date. So I signed up for Match, and was very specific in my profile as to what I’m NOT looking for. Guess what my inbox filled up with? Dudes I was NOT looking for. I promptly canceled my membership and resumed my life of solitude. This conversation confirmed that I will never be an online dater.

Watching Rob Zombie from the platform allowed me to completely geek out. Having seen Zombie numerous times over the years, this was my first time from backstage and I loved seeing how all of the production stuff worked. The stage hands who are the giant monsters, the set and costume changes, the dance moves from a different angle. I always have tons of fun at a Zombie show, and tonight was no exception as I danced along by myself up there while a bunch of other musicians gazed upon the spectacle. There were several new set elements and costumes, but no dancers still…I miss that part. 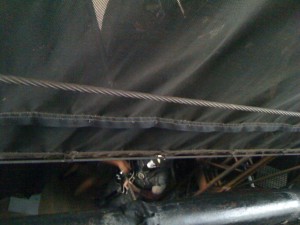 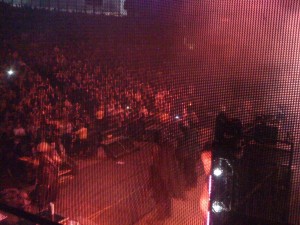 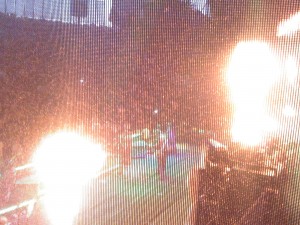 As I mentioned before, it had been a decade since I had seen Korn. People love to pick on this band, but I’m not afraid to say that I still love their first couple albums, and am currently really liking the new song, Oildale. I think Jonathan Davis is a great front man. I started out watching this set from the soundboard, where some chick did something bad and got dragged away, and then a certain member of a certain local band nearly stood on top of me for the second time in two months….my superpower in invisibility! Then I moved to the other side and watched from behind one of the giant oil rigs, behind the pyro guy who was jamming out pushing buttons. It looked like that was a really fun job to have. The stage props made my view a bit obstructed, but when I have the opportunity to watch a band like this I take it. It was cool to watch Ray Luzier play on that giant kit, and see the crowd go apeshit when Davis came out with the bagpipes. 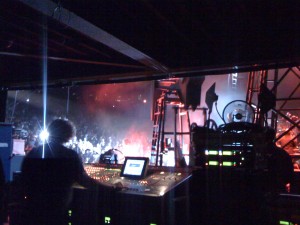 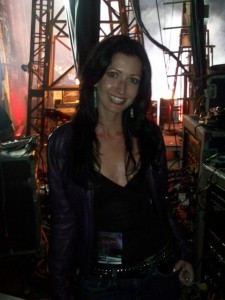 Afterward, I hung out at the Jagermeister sponsored after party for a bit, where I did a shot of terrible tequila and watched the metal guys kinda awkwardly pounce on the few girls that were around. It was a funny way to end an already bizarre evening.

The parking lot was cold and near empty by the time I returned to my car. As I rounded the bend and saw SF all lit up at night, I realized this would be my last time to return to the city as an inhabitant. Weird.

Well, 18 year old me….I’m not sure you would be happy with 30 year old me. You will have many great times and great memories ahead, but there will also be many dark times. And while your journey will be long and winding, it will bring you back to the same place you are now, with the same questions you have now. But perhaps that is life.