While this is technically my second show to write about after moving back to Texas, it was my first metal show in what will become my new scene.

I really kind of hate that phraseology, but that’s what it is. And while I spent a lot of time kind of dancing around the SF music scene, it’s not until you leave it that you realize you were a part of it. And it’s not something you can just drop yourself into, either. The only thing that makes it is time, and after five years of living in SF’s venues, and three and half years of writing about my experiences, things had become so familiar. From the spaces to the bouncers to the bartenders and security; the other bloggers and photographers and musicians who go see other musicians play. It took me years to find ‘my spot’ at every venue. And now I’m starting over….

…in the live music capital of the world.

The day began by driving to San Antonio and then to Austin, because that’s how you run errands when you live in small town Texas. Then I met one of my best friends from middle school for a nice sushi dinner, because I am having mega withdrawals after leaving California. My friend and I had an intense conversation about tragedies occurring in our lives right now while we dined over Texas spins on rolls (hamachi, cilantro, avocado, jalepeno = yum; tuna, pineapple, cilantro, avocado not so much). While my friend’s musical tastes are not metal- she followed around the Disco Biscuits– she graciously became my +1 for a while so I didn’t have to walk into the show alone. 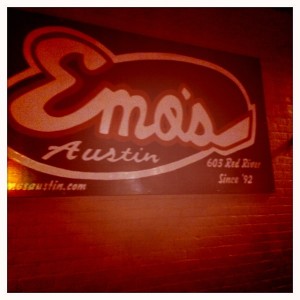 I entered the venue by flashing my passport to the man with the guestlist, as if fully declaring ‘I’m not from here’. My TX driver’s license hasn’t arrived in the mail yet. Granted I spent a fair amount of time at Emo’s in college, this will most likely become my home away from home now. I may have been born in Texas, but HRC was born in San Francisco….which now that I’m back is giving me a bit of an identity crisis. But it ended up being very fitting that my first show in my new scene would be seeing a San Francisco band….easing me into the transition. And on 8-9-10, no less.

I’m looking around at all the unfamiliar faces as we grab drinks at the bar. Everyone looks so naked here….in SF everyone is bundled up all the time. I found myself oogling a lot of tattoos since they were so exposed on this 90-something humid night. The first band was finishing up, and I could see my friend wincing from it being so loud, so I went and asked the bartender for earplugs. He pointed behind me, and we found there is a machine to dispense them…nifty! 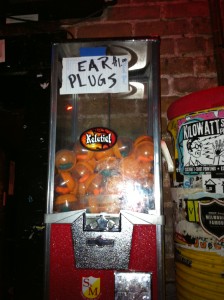 Local band Eagle Claw played their doom-leaning set in the dark with projections very reminiscent of Metalocalypse behind them. I think I will be seeing a lot of this band as an opener- their calendar is loaded with local shows. This reminded me of how local bands here play A LOT compared to SF local bands. And I don’t mind that at all….I followed around the Dethklok/Mastodon tour, even to Austin, last year. 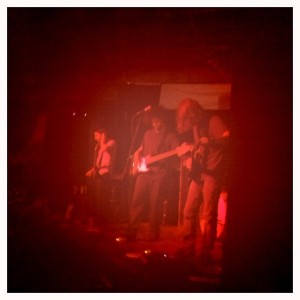 Sitting outside between sets, I was admiring all of the posters that adorn the fencing around Emo’s. My poster collection currently sits in storage…I miss being able to see them all on my walls.

I saw Howl around the corner at Red 7 at SXSW and really liked them. It was so cold that day that thinking about it made me shiver in the heat of the indoors. I told my friend that this girl on guitar will blow her mind, and as the set began, she nodded in enthusiastic agreement before she ducked out to leave me to enjoy the rest of the show on my own. Howl were even better than I remembered; frontman Vincent did less entertaining banter this time, exchanging it for crowd admiration. For a Monday night, there was a pretty impressive crowd- and he commented that they had just come off of some really bad shows. I love seeing a band feel rewarded up there on stage. Texas is a big fucking state, and to come down here you have to really want to do it- it’s not on the way to anywhere else. 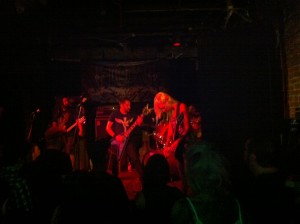 As I was bathed in the heavy melodies of Howl, it hit me how much I have missed going out to see shows. I mean- I had seen over 70 for the year before I left SF. I think about it all the time, but it just really hit me then. I never forget how it sounds to be at a show, or how it looks, or unfortunately how it smells (SF – weed…Austin – sweat and Jack Daniels). But it’s how it feels to be there that is the part I often forget, and is what I must be chasing as I attend so many. It’s being part of the crowd, the vibrations, the heat, the realization of creativity and performance….it’s that feeling of being at the right place at the right time. And on top of that I feel very me….something I have to file away a lot right now. 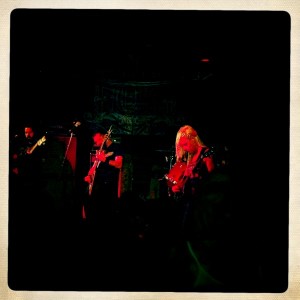 After declining two offers for drinks from guys- something that NEVER happened to me in SF- I spent the break between sets people and tattoo watching while Black Cobra set up. The last time I saw them was opening for Mastodon on the huge, majestic stage of The Fox Theater, and it was probably my favorite set of theirs of the many times I’ve seen them. But they do just fit so well on the small stage of a dive club. It’s like they get angrier every time I see them. These two spend so much time on the road that I’m sure they are at no loss for things to get angry about. It was good to see them get such a warm reception in Austin. I got chills when Jason leaned into the mic and said, ‘We’re Black Cobra, from San Francisco’. I realized I had started to pretend I was back in SF last year, at the now closed Annie’s Social Club, and Makh is standing near me banging his head along to the set. 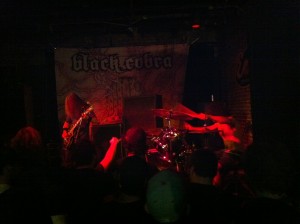 People ask me all the time why I listen to metal- especially right now as I’m reconnecting with old friends. There’s a lot of pain in this world, and metal captures that for me. It helps me feel it, rationalize it, and move on. And Black Cobra did that for me on this evening.

Driving an hour and a half home after a show that lets out at 1:30am may suck, but it’s worth it to continue to do what I love. Plus, I took my new hot rod to 100 for the first time, to the heart-arresting beat of Frost’s drums.